Golden Princess, a sixteen-year-old ship, which has managed to maintain her grace.

The Golden Princess is registered in London.

The above photo clearly illustrates the historical link between Australia and the UK. The flag on the left is the Princess company flag.

We did notice a few things different from the more modern vessels.

The balcony was smaller than those that we have experienced on other Princess ships, but as the weather was not ‘sitting out’ weather this was not a problem.
Our shower cubical was smaller than on previous ships – just don’t drop the soap because I had to step out of the shower to pick it up . . . perhaps this is why the liquid soap bottle is bolted to the bulkhead in the shower – due to a skin reaction to perfumed soap I use basic unperfumed soap, which is why I make an effort not to drop the soap!

The view from our cabin before we sailed. 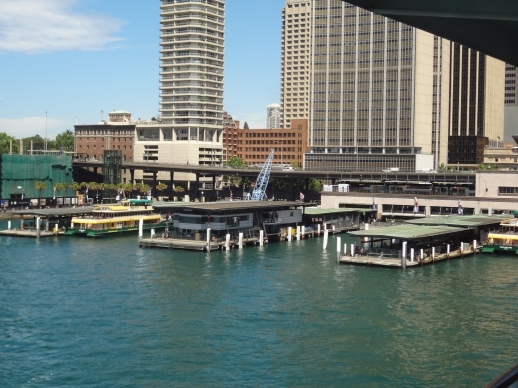 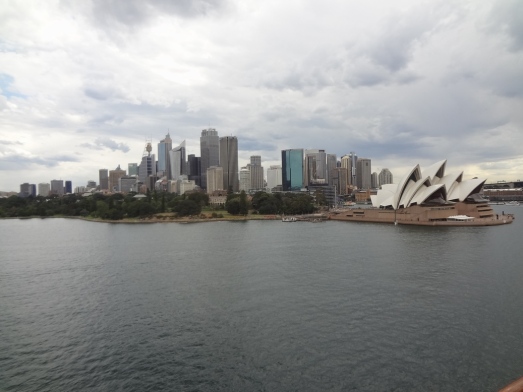 The cruise has started – ‘sail away’, with the traditional dance music and passengers trying to secure the best photographic position as we sail Sydney Harbour towards the open sea.

A blast form the past, perhaps the last arrival from the 1st Fleet in 1787.

A piece of history, the Sydney ferry passes the top mast of ‘HMAS Sydney’, the Australian light cruiser that fought and beat the German light cruiser ‘Emden‘ off the Cocos Islands in November, 1914, during WW1.

If you wish to know more of ‘HMAS Sydney’ and the ‘Emden’ check this link.

The view from our balcony, after leaving Sydney harbour. I could spend hours just watching the sky change shape – who needs TV?