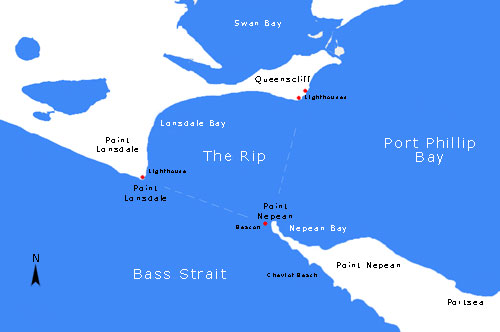 The gap at the mouth of Port Phillip Bay is called the RIP , or The Heads, which can be very dangerous. The gap between the two points of land is just over three kilometres, so of course to pass into Port Phillip requires a pilot.

It is said that this stretch of water is the most dangerous in Australia the tidal flow from Bass Straits into Port Phillip can be around 15 k/m per hour (9.5 miles mph) through a very narrow channel.

The above picture is downloaded off the internet

The pilot boat that came out to a ship had to fight the Rip outbound, and after leaving the pilot to board the inbound vessel it would return to the relative safety of Port Phillip.

We had sailed from Sydney and arrived off Port Phillip Bay on the 24th April and were slowly making out way to seaward of the Rip to pick up our pilot.

We regularly practiced emergency signals for fire drills, man overboard, collision  etc so as we approached the pilot area for Port Phillip, which was around 11.00 am the alarm bells sounded and the ship’s whistle blew long blasts and kept on sounding three long blasts. At first, I thought it was another drill until I realised it was a genuine emergency. The three long blasts indicated a man overboard.

As I ran on deck, I saw a warship racing towards us and our manned motorboat was being swung out to be lowered to the water as we slowed.

As I reached the bridge I was told that an engine room fitter had gone mad and thrown himself overboard.

I was ordered to the mast head so grabbed a powerful pair of binoculars and climbed the foremast in the hope of spotting the man in the water.
The problem was that the sea was covered in ‘white horses’ or breaking wave caps due to the wind  The above picture from the internet illustrate my meaning. The boat in the picture is one of the Port Phillip pilot boats.

Every available advantage point on our ship was covered with crew trying to spot the ‘jumper’.

The warship called in a spotter plane, but from memory it was a jet and at the speed it travelled, even though quite low, it had little chance of sighting anyone in the water. I thought I saw him once waving, but as I tried to focus the binoculars on him, he or what I thought was a man in the water disappeared.

My own ship, the warship & the spotter plane spent two hours looking for the missing man, but the only things we recovered were our own lifebuoys that had been thrown overboard in the hope that the man would use them to stay afloat.

We were required to recover our lifebuoys because each lifebuoy had our ship’s name printed on each buoy and the last thing we wanted was a stray lifebuoy to be found washed up on a beach, which might cause people to think that we were in distress.

At the time we doubted that the seaman wanted to be rescued so perhaps he would not have made it easy for us to find him. The wind was quite strong to he could have been blown further out to sea, plus the tidal rip would not have helped.

We eventually entered Port Phillip Bay and made our way to the docking area only to be told that because we were two hours late, we’d missed our docking time so we had to anchor off Melbourne and wait until the following day, which was ANZAC Day, so there wouldn’t be any cargo work done that day.

It was not long before some of the crew considered the ship to be unlucky. She used to be called MV Cornwall, and now she had a new name MV Juna, and changing a ship’s name is supposed to be bad luck . . .  we had had some accidents during the voyage, we had been short of water, and short of food, and now we had a death. We also had three wives on board, which is supposed to add to our bad luck.
You’d of thought that we were still in the sailing ship days, with sea monsters and mermaids. 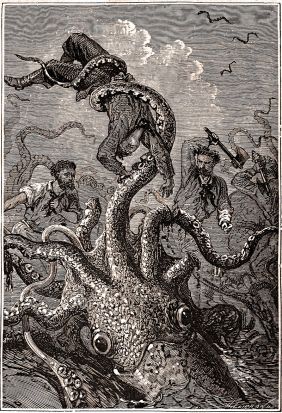 Picture is an illustration from the original 1870 edition of Twenty Thousand Leagues Under the Sea.

We worked cargo most days until we sailed for Adelaide in early May, the city of churches. Pleasant enough town, but quiet.

Sailing from Adelaide was on the brink of the southern winter (June, July & August is classed as winter), and our next port was Fremantle.
This would require us to cross the Great Australian Bight again, and this time it was a rough crossing and it was cold. I remember wearing two pullovers and a duffel coats on the bridge during the midnight to 4.00 am watch.

On the plus side the stars were spectacular due to the clean air and lack of light pollution, but it was far too cold to spend too much time admiring them from the wing of the bridge, which was open to the weather. 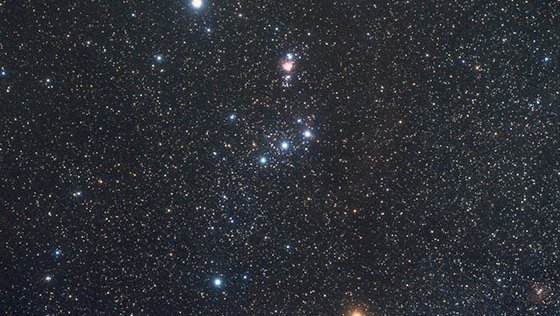 This is a recent picture of the southern night sky; I was unable to find exactly what I wanted.

An illustration of part of a bridge (not MV Juna) – the helm can be seen and the engine room telegraph. The helmsman would stand on the wooden platform when required, but as M.V Juna had auto-steering we would only become ‘manual steering’ when close to shore, or when picking up a pilot.

When the autopilot was in control the helmsman would become a bridge lookout, along with the officer of the watch, but on the opposite side to where the OOW stood. We would regularly swap sides to keep warm and awake!
As usual at night, we had a seaman in the bow of the ship who was also on lookout, but he didn’t have any cover, so his night watch was only two hours.
On seeing anything (light, shape in the water, or anything unusual) he would ring the fo’c’sle bell – one trike for starboard, two for port or three for dead ahead.

Picture from the internet – could not find a picture of MV Juna’s bell.

It was a pleasure to arrive in Fremantle, because we were out of the cold wind & choppy seas, and the weather was very pleasant.