Perhaps A Brief Encounter should have been the title of this blog.

Celia Johnson & Trevor Howard in a 1945 romantic drama, which might have links to Punta del Este.

A British lady, Margaret Elizabeth Douglas, was born in Punta del Este in 1918. Her mother was Anglo – Argentinian and her father was Canadian and he owned a beef ranch in Argentina, and also a beach house in Punt del Este, Uruguay.

Margaret went to school in England, and in 1941 she joined the WRENS – (Woman’s Royal Naval Service) and was training at Westfield College, London, to become a cook

She and her class mates received a training request, said to come from Winston Churchill, for volunteers for secret war work. Margaret Douglas volunteered, which lead her to become involved in decoding work at Bletchley Park, and not a naval base that she expected.

In 1942 she met a Canadian Air Force officer on Bletchley Station and had a brief conversation on the platform, but they didn’t exchange names. Margaret caught her train and they parted.

Later, Margaret received a letter addressed to  “the blonde Wren from Argentina on the platform at Bletchley station”. They married in 1945 and moved to Canada where they farmed beef, horses and a cherry orchards.

I wonder if Noel Coward’s inspiration for  ‘A Brief Encounter’, came from real life . . .

Margaret never spoke of her time at Bletchley until the secret work become public knowledge in 1974 when Frederick William Winterbotham’s book The Ultra Secret was released.

Punta del Este, the playground for the rich and famous, along with wealthy Argentine and Uruguayan holidaymakers have made this town a place for the elite to holiday. The town doesn’t have any public housing, so it all boils down to the haves & the have nots . . . 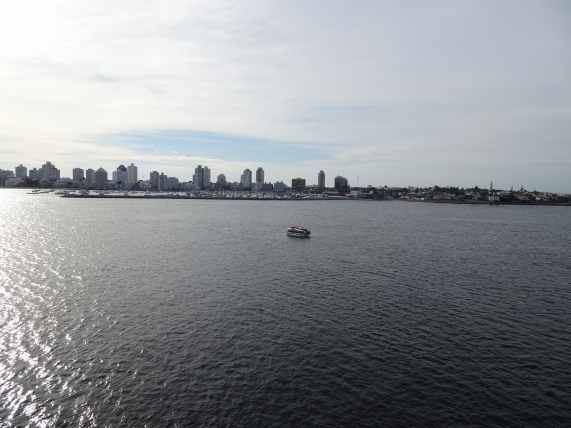 Approaching our anchorage – the town doesn’t have berthing facilities for larger vessels, but only for small boats.

We anchored and as the ship swung around, Gorriti Island came in to view  – rich in wild life – seals, right whales, orcas chasing tuna, along with fur seals and sea lions. 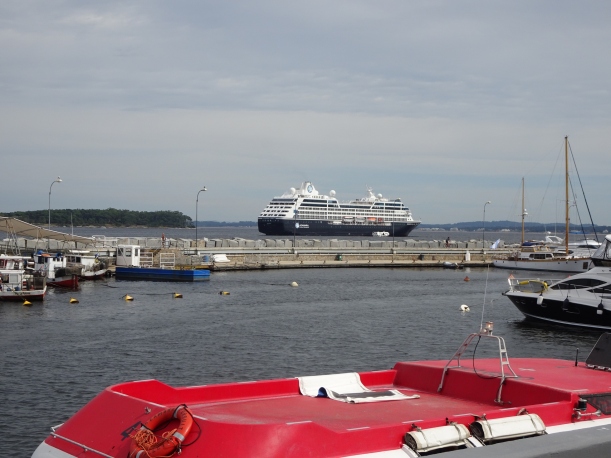 We stepped ashore after about a seven minute boat ride. 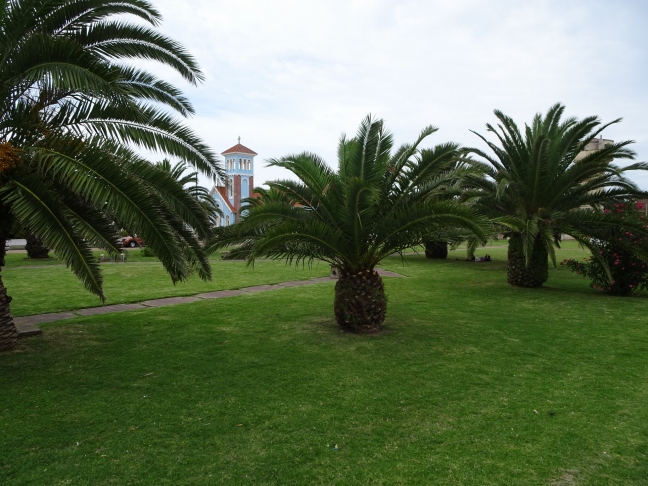 It was a reasonable temperature so we decided to walk to see the ‘The Hand’ monument, and according to the the map the monument was not too far away.
We started our stroll through a residential area, which was very pleasant, and we could see that the sea was not too far away.

They wouldn’t have a lighthouse too far from the sea.

I was interested in the houses as many looked very attractive, and having a beach so close would be an asset for the owners. 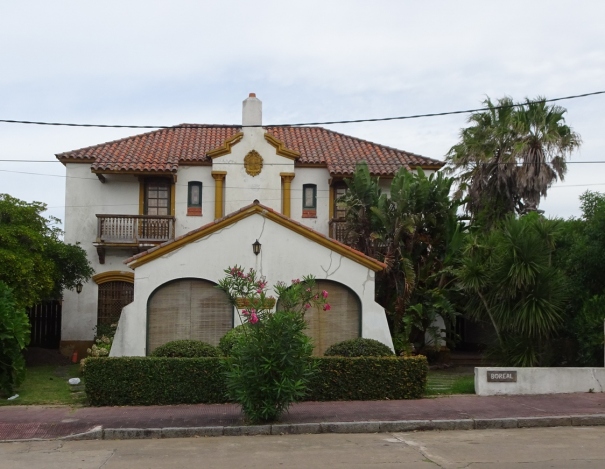 Different styles all mixed together.

At the bottom of the street – the ubiquitous block of beach side flats.

Couldn’t knock the view from the flats.

As we reached the sea, the temperature started to rise . . but it wasn’t uncomfortable. 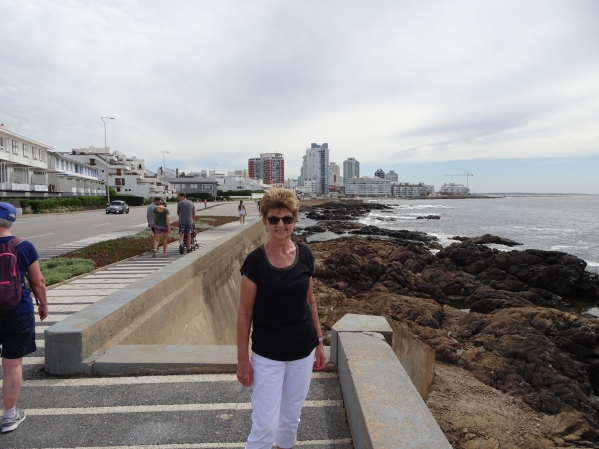 The monument was just around the point of land, and it didn’t look all that far.

As we reached the point of land I looked back – you can just see the lighthouse, on the right.

The monument must be around the next small point of land.

It wasn’t and now Maureen was not feeling all that well, due to the heat as well as the walking, so we had to find some shade.

Fortunately we found a bus shelter not too far from this position. So once Maureen was inside the shelter I could see the ‘The Hand’ and Maureen was happy to stay ‘in the cool’ while I went to take some photographs.

I met our dining room steward who kindly took the above, to prove that I’d made it . . .

On returning to Maureen I decided to take a taxi back to the ship, because she was not at all well. Fortunately across the beach road, towards the main shopping strip, we found a taxi stand.
Once back at the pier and we were able to sit in the shade and enjoy a cool breeze, Maureen began to feel better. 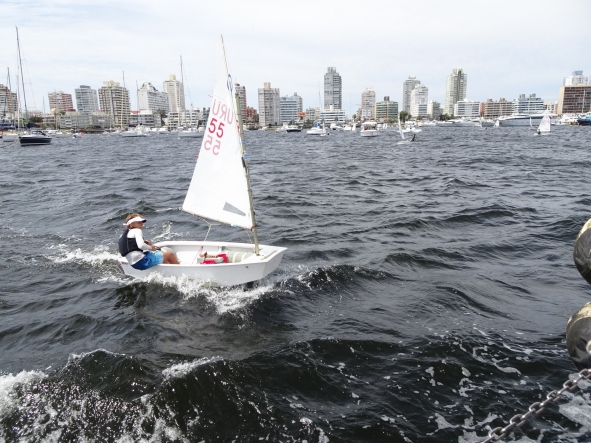 As our tender boat left the wharf I wondered it this fellow was going to hit us. 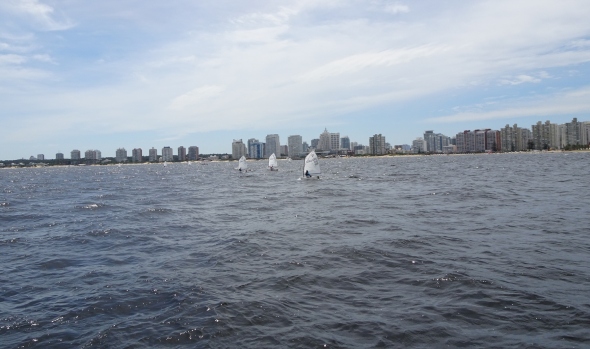 Took the above from the Living Room.

As we left the wharf to return to ‘Azmara Pursuit‘ we saw seals playing under the landing stage and around the small boat mooring areas. Of course I couldn’t get my camera out in time as the tender boat swung round so as to head out to the ship, but one of our New Zealand friends did manage to get some pictures. 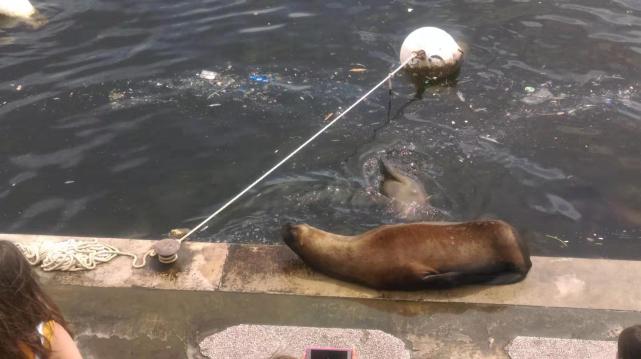 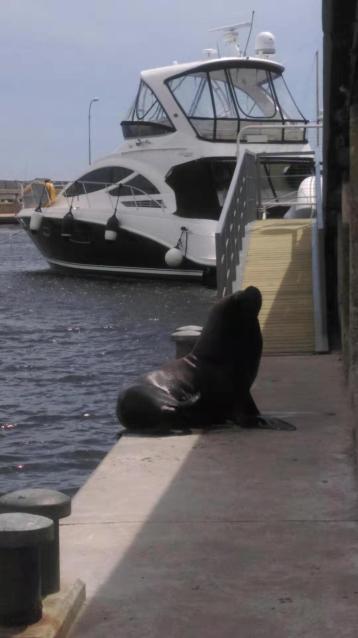 Must admit this  was a welcome sight, the sun had become very hot, and after our long walk we’d had enough for the day – we didn’t even get to look a round the shops.

With hindsight, instead of walking towards the beach after leaving the tender boat, we should have turned to our left and walked along the main shopping street, which would have allowed us to pop in and out of the shops to keep cool – isn’t hindsight wonderful? 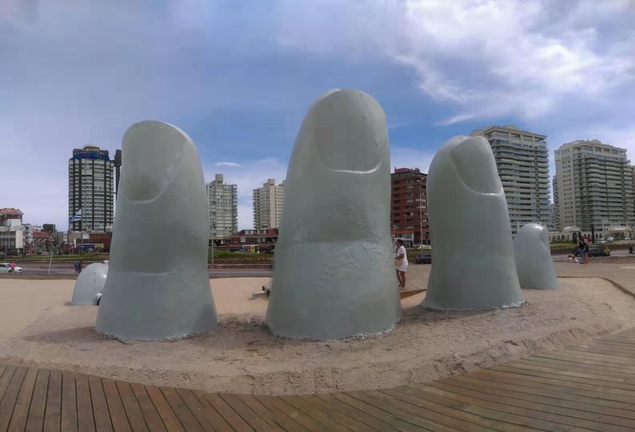 A close up of the fingers, thanks to my New Zealand friends.