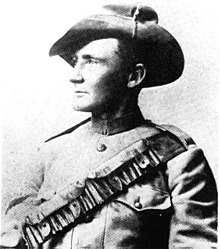 Rule 303 a quote supposedly said by Harry “Breaker” Harbord Morant at his court martial in 1902, he was found guilty and shot by firing squad on the 27 February 1902, 118 years ago this week. 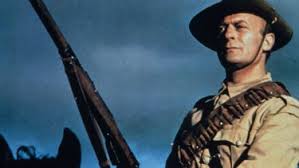 Morant was played by Edward Woodward

We loaded the last piece of cargo in Karachi at 4.30 pm during which time the ship had been prepared for sea – the pilot was on the bridge and our mooring lines had been singled up (one line forward and one aft), time was of the essence after the trouble with the previous deck crew. Our next destination was Bombay (now Mumbai).

On arrival in Bombay was on the 24th February at 6.00 am, we were told to anchor in the explosive anchorage, we were to load 303 ammunition.

I’m not sure if the Captain was aware that we would be loading the ammunition before we arrived or if he found out as the pilot boarded. We were told of our cargo and that it was safe, but few of us smoked on deck – just in case.

The SS Fort Stikine (7100 gt) had sailed from Birkenhead UK, in February 1944 and arrived in Bombay in April.
She was berthed in the Victoria Dock, and her cargo consisted of cotton bales, gold, and ammunition, which included around 1,400 tons of explosives. She also carried 238 tons of sensitive “A” explosives, torpedoes, mines, shells and a Supermarine Spitfire.

In mid-afternoon on the 14th April a fire in number two hold was discovered. The crew and dockside labour were unable to put the fire out, even after pumping 900 tons of water in the the ship. The water boiled due to the heat. 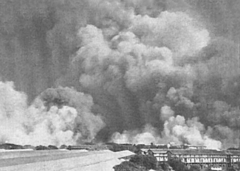 The ship was cut in half, windows were broken 12 km (7 miles) away. Later there was a second explosion which registered on a sensor reading in Shimia 1700 km (1020 miles) away, a town which is north of Delhli.

Showers of burning material set fire to slum areas, and two square kilometres (about a square mile) was set alight. Eleven other ships close to the Fort Stikine were sunk. Burning cotton bales fell all around and much of Bombay’s developed and economically important areas were destroyed by the blast.

Overall it was estimated that more than 800 people were killed and being war time, the explosion and aftermath were not made public until some time later. Some figures have the death toll as high as 1350 people. Of those who were killed 500 were civilians. Over 2500 were injured, sixteen ships were lost or heavily damaged (see below) and 80,000 people were left homeless. 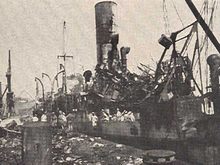 You’ll be pleased to know that nearly all the gold was recovered . . .

So this is why we didn’t smoke outside of the accommodation.

We loaded the ammunition safely, and we weren’t too bothered because we didn’t have any other explosive cargo on-board.

After loading other (normal) cargo we were told that we had to go to Chalna, which is  in East Pakistan (now called Bangladesh).

Nothing is easy, because the relationship between Pakistan and India was not all that cordial in the 1960’s.
So now we had a problem – we had Indian ammunition on board and we were required to visit East Pakistan, but we couldn’t visit East Pakistan because we had a cargo of Indian ammunition on board.
Cable London!, and all we had to do was to remember the opening lines of Casablanca &  wait and wait and wait.

Finally, the powers that be came to a decision – carry the ammunition to Cochin and unload it to make room for tea out of Ceylon (now Sri Lanka) and then sail for Chalna.

Maureen & I visited Cochin (now called Kochi) in 2016 on a cruise ship and as soon as I saw the harbour I recognised the shoreline and the 1960’s flooded back in to my mind. 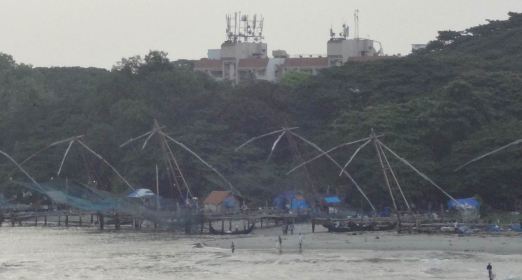 Chinese fishing nets can be seen. Sometimes ‘Time’ seems to have stood still.
The picture is not very clear due to early morning mist. 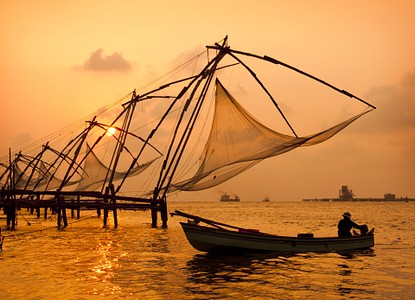 A clearer picture of the fishing nets from the internet.

At home I have four pictures on the wall of my dinning room – I watched the artists in Cochin paint the final strokes of the multicoloured painting – I’d already bought the three sepia pictures, and I could see the scenes that he’d painted – all are painted on thick paper. 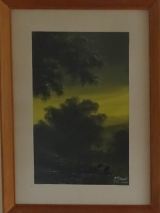 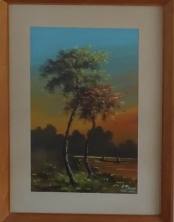 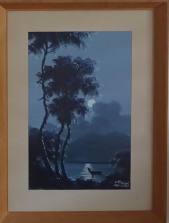 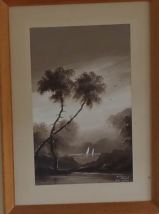 To end this post as I started with Edward Woodward, but this time he is singing Soldiers of the Queen after the execution of Breaker Morant, the piece of film also notes that their defence advocate died in 1945.