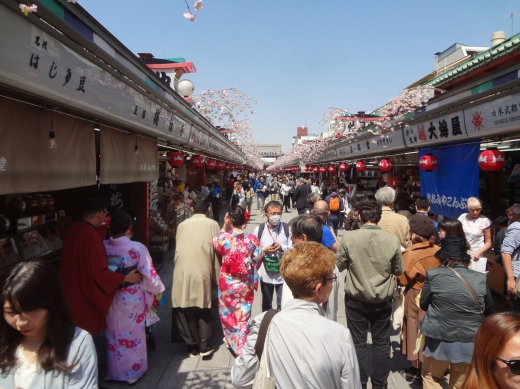 Not far from the restaurant is the long alleyway of Nakamasi, that leads to Sensoji Temple.
The alleyway is host to stall after stall, selling everything from snacks, toys, handbags and souvenirs, a shopper’s delight.
The stall holders first obtained permission to sell their wares in the early 18th century.

Note the ladies in kimonos.

Not all of the kimono clad ladies were Japanese – the kimonos could be hired for the day or a few hours, while shopping. 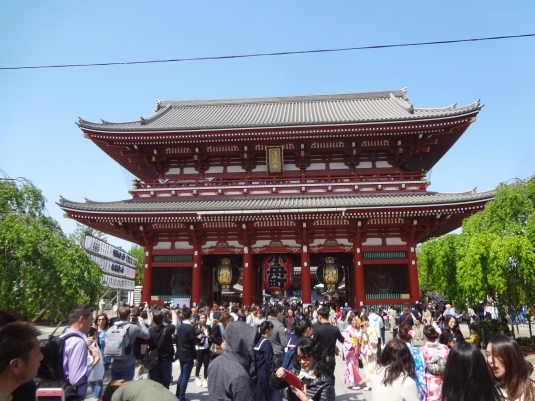 We entered the temple through Kaminarimon, which mean Thunder Gate (below the hanging lanterns in the centre).

As we walked through the gate on either side hung giant ‘slippers’ made of rice straw. The first pair were produced in 1941 as a thank you gift. There is a long tradition of offering sandals as a thank you gift to temples. The original pair were destroyed during the bombing in WW2.
The sandals are called waraji, being made of traditional rice straw, but with an ‘o’ in front it becomes ‘owaraji’ which means big.
Each sandal is 4.5 meters in length, 1.5 meters wide, and it weighs 500 kilos.
The re-establishing of giving the sandals to the Sensoji Temple began in 1964, and they are replaced about every ten years.
To produce a pair takes about 18 months, and the labour of about 800 people, including the people who plant the straw, and those who cook for the people actually making the sandals.

Once through the gate on the left we saw a five storied pagoda – access to it is very limited. Buddha’s ashes, officially inherited from the Isurumuniya temple in Sri Lanka, is stored on the top floor.

At night it is illuminated.
Above picture from Japan Travel site. 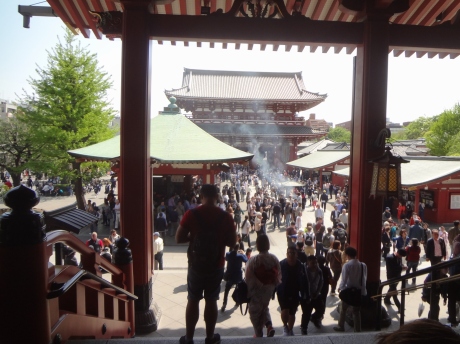 We entered the steps area of the temple and looked back – the smoke that can been is ‘cleansing’ smoke. The faithful rub it over their hands and any area that is giving them trouble. They believe that the smoke will help them get better, or cure aches and pains.

Next door to the Buddhist temple is a Shinto Temple.
Both beliefs live in peace with each other. 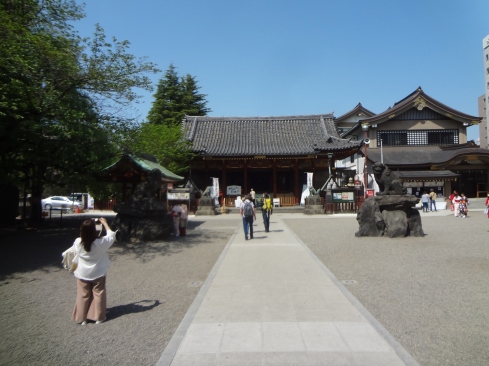 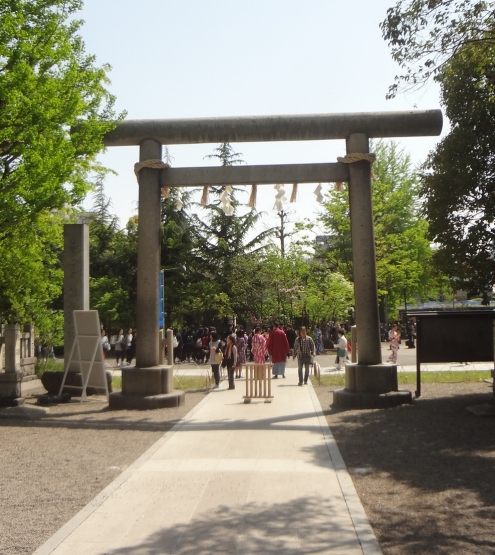 Note the barrier in the middle of the gate – only God can walk through the centre, because he is pure and unblemished, all others have to walk on the side, because they are unclean.
It took us an hour and a half and three trains (two changes) to get back to the ship – we were not delayed, it was just the distance.

As we prepared to sail the band played on, and the crowds gathered.

As we pulled away from the wharf everyone ashore started to wave yellow pieces of cloth. 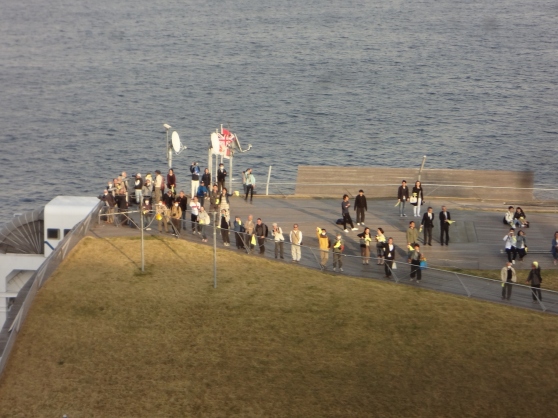 The end of the wharf – still waving. 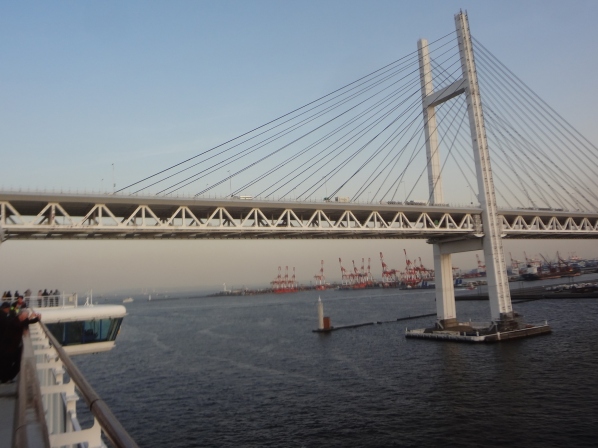 The beginning of a new voyage – next port is Busan in South Korea.

On the other side of the wharf where Diamond Princess was berthed . . . . .

For those who can remember when ships were ships, and not blocks of flats, the above is Hikawa Maru, launched in 1929, and built in Yokohama, and is now moored in Yamashita Park, Yokohama, and is a museum. She is currently owned by the NYK line.

School children are encouraged to visit so as to recognise and celebrate Japan’s maritime history.

A much better fate than the beach at Alang, in Gujarat, India. The  graveyard of many a fine vessel.