Abu Dhabi 2017 – the Emirates Palace Hotel – I didn’t have any friends in Abu Dhabi so I was unable to fix a visit, but I did check the rates – on special the cheapest room is AUD $365 / night (USD $290) but couldn’t find out if this included a ‘free’ breakfast. The most expensive being the Palace Grand Suite at AUD $16,845 (USD $ 13,332), which isn’t bad when you compare this to the Dubai hotel cost for their most expensive room.
Palace Grand Suite  I added the 10% service charge & the 6% room tax to the Grand Palace Suite costs – check the links for pictures.

Abu Dhabi 1963 during my first visit to this town. In the early 60’s going ashore was by a boat to a local beach.

Dhows would come out to us, (after we’d anchored), and we would work cargo using our own derricks etc.

Check below as to how we stepped ashore during our recent visit. 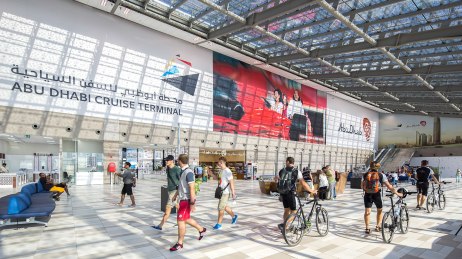 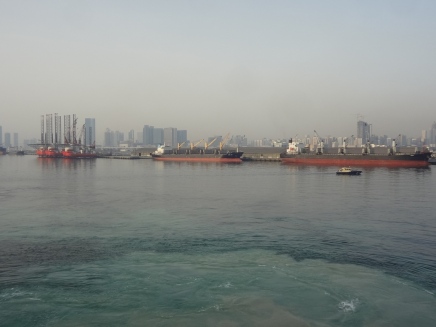 I took the above as the Majestic Princess manoeuvred alongside – you can see the disturbed water from our side thrusters pushing us bodily alongside.

Maureen & I decide on a basic tour of four hours or so, which included a visit to the new (opened in 2007) Sheikh Zayed Mosque.

Doesn’t matter where we go we end up in a fish market . . . without chips.

I can’t remember what type of fish this chap was showing us, but I’m sure someone will tell me. I liked the colour and wondered if it retained its colour once it was cooked, and on the plate.

Heritage village – I found it a disappointing place that had been ‘recreated’ and had little resemblance to the Abu Dhabi that I remembered.

The above gives you an idea of what Abu Dhabi was like in the early 60’s. The shops  didn’t sell post cards the last time I went shopping in Abu Dhabi, but Japanese electronics, which are now collectors items. The person with the umbrella is protecting themselves from the sun, not rain.

Front area of the Presidential Palace. 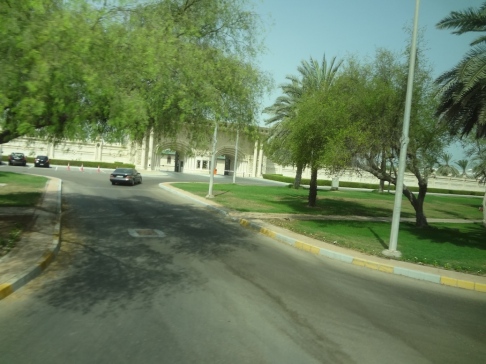 The guide did mention that each of the wives of the Sheik had their own entrance to the living quarters, so as not to meet each other I suppose. 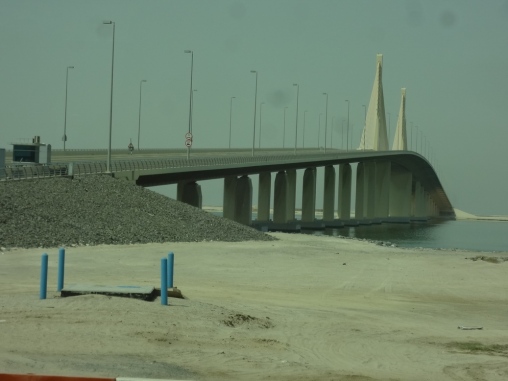 I think this is the bridge to nowhere – a private island that is empty, so I suppose that makes this a private bridge . . . didn’t see any vehicles on the bridge.

A short time after the ‘bridge to nowhere’ the Sheikh Zayed Mosque came in to view. According to what I have read in the ship’s blurb for the tour of Abu Dhabi, the mosque is the 8th largest mosque in the world, but according to the internet it is the 9th, but who’s counting? Enough to say that it is big.

To comply with the requirements of the mosque Maureen had on a long sleeve blouse & slacks down to her ankles, and I had long pants with a short sleeve shirt. Being a mere male I wasn’t bothered, but our guide on the coach became upset that Maureen’s pants were not long enough and said that the religious police might not allow her to visit the mosque. She offered to return to the cabin to change in to yet longer slacks that dragged on the floor, but the guide said that we didn’t have time to wait. We had a number of ladies on our tour in the same situation. Maureen and a few others accepted that they would not be visiting the mosque due to the clothing problem.

We parked outside the mosque and the guide suggested that the ladies try and enter and to see what happens. As we walked towards the main entrance Maureen was pulled to one side with some other ladies off our bus.

Maureen insisted that one of us should see the mosque (me) and that she will wait in the bus with the other ladies.

I passed through security and started the tour of the building. 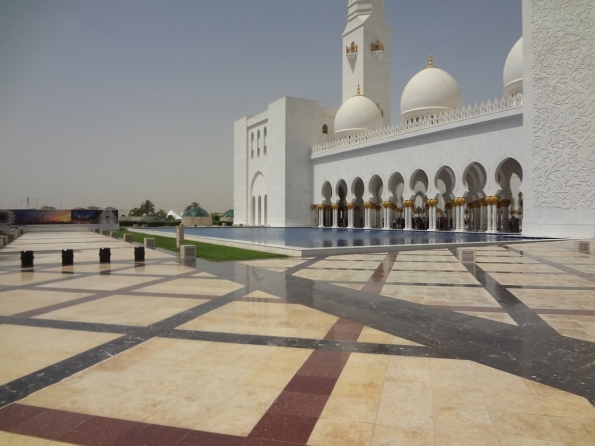 Area to the left of the main entrance with the pool.

The inner courtyard after passing through the main entrance of the mosque. A minaret is at each corner. The courtyard is 17,000 sq mtrs (180,000 sq feet).

It is thought to be the largest example of marble mosaic in the world. 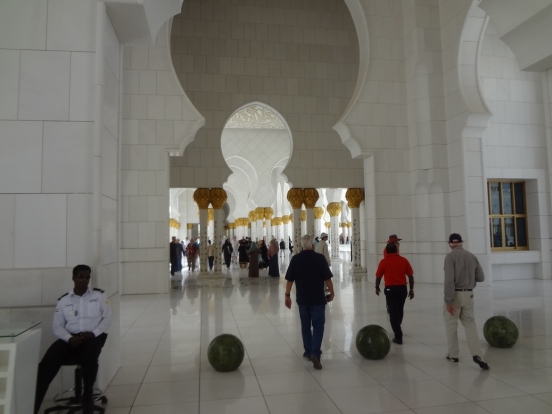 The start of the walkway.

With the breeze blowing through it was not unpleasant walking along the columned passages.

The water helped to cool the breeze as it wafted through the corridor.

At the end of the corridor there were seats and racking system – visitors had to remove their shoes. As I was removing my shoes I was accosted by a lady in black. 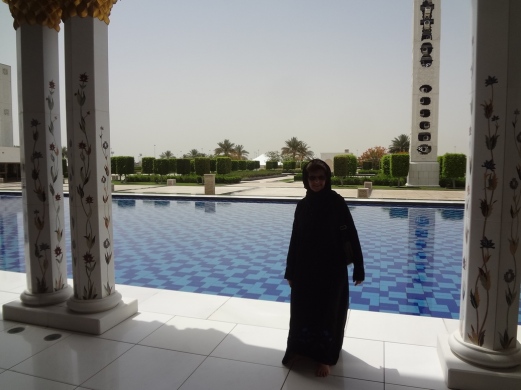 The lady turned out to be Maureen – she’d been offered an abaya from our coach driver.

Once inside the main hall we could see the carpet – 5,627 sq mtrs (60,570 sq feet). The largest carpet in the world, at 35 tons, it took 1200 to 1300 carpet knotters around two years to tie 2,268,000 knots to create the carpet, which is mainly wool from New Zealand & Iran. Apparently some of the carpet is slightly higher than other parts. This is to help worshippers, when on their knees, to face the correct way. The direction indication of ‘correctness’ can not be seen when standing. 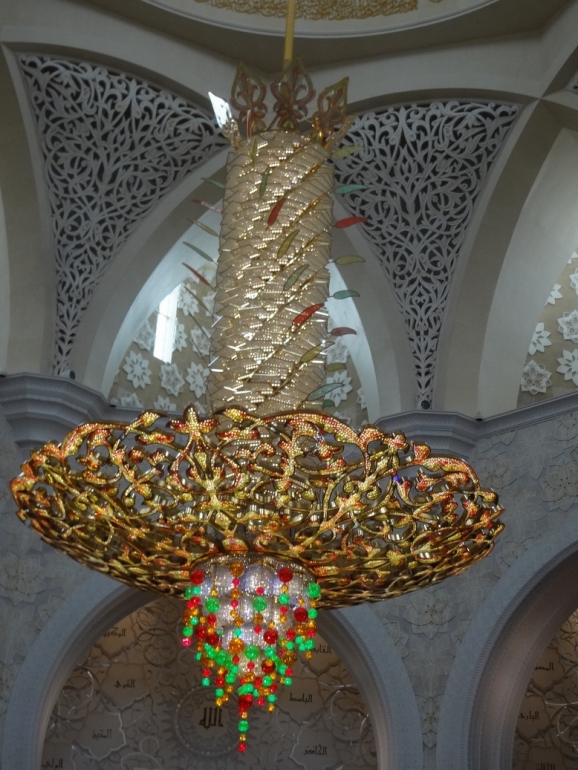 There are seven chandeliers imported from Germany and they contain millions of  Swarovski crystals. 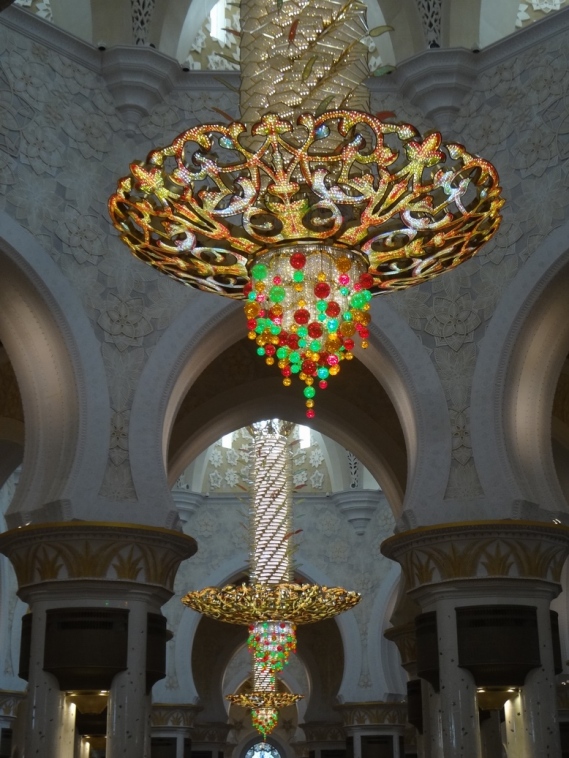 I tried to get all three chandeliers in to the same picture.

Indicators for prayers. The Gregorian calendar starts at zero based on Christ’s birth, (BC/AD) whereas the Muslim calendar starts at Gregorian 622 (AD) is based on Muhammad’s arrival at Medina.
His journey was during the year of the Hijra (which means Permission to travel), so the Islamic calendar was dated from the Hijra year , which is why it shows as 1438 AH (Anno Hegirae – Latin – for ‘in the year of the Hijra’) for the current Islamic year.

The various names indicate the prayers e.g ISHA is the night time prayer of the daily prayers and is the fifth prayer. Faja is the dawn prayer, Dhuhr is the mid-day prayer, each name has a different meaning for the faithful.

The visit to the mosque took about 90 minutes. I found it interesting from an architectural point of view, because my knowledge of the Islamic faith is limited. The cost to build the mosque, which was started in 1997, was USD $545 million in 2007 ($652 million in today’s money).

As our coach left the parking area I couldn’t help but think of the $545 million dollars for a project that focuses on the faith of the people. When I got back onboard the Majestic Princess I checked a few facts on the net.

In 2004 the world had the tsunami that destroyed hundreds of homes and thousands of lives, in 13 countries, particularly in Indonesia, which is the largest Muslim country in the world. The world rallied around to help the Indonesian, Sri Lankans, Indian, Thais etc who had suffered huge loss of life and infrastructure. A total of 226,000 people died of which 74% were from Indonesia.

A call went out across Australia for help, particularly as Indonesia is our nearest neighbour. Like many other countries Australia dug deep and contributed cash and food to the extent of USD $66.38 / person via direct giving or government giving, making a total contribution of $1.322 Billion USD.
In comparison the UAE (which includes Dubai as well as Abu Dhabi) gave $7.92 per person, a total of $20 million dollars of citizen direct giving, and government contributions.
In comparison Kuwait gave USD $44.3 / person ($100 million), Qatar USD $23.80 / person ($20 million), Saudi Arabia USD$1.16 / person (USD $30 million).

I’m not being judgemental just pointing out the difference in priorities – a building (how ever beautiful) and five million people homeless, and without access to food & fresh water. 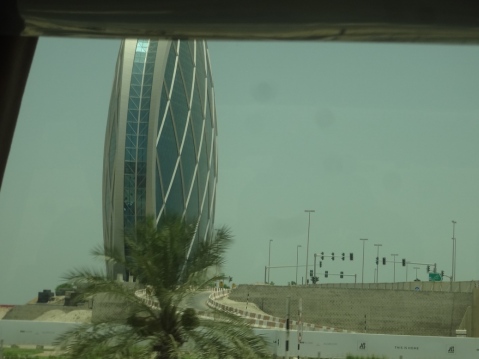 I tried to take a decent shot of this building on the way back to the ship. 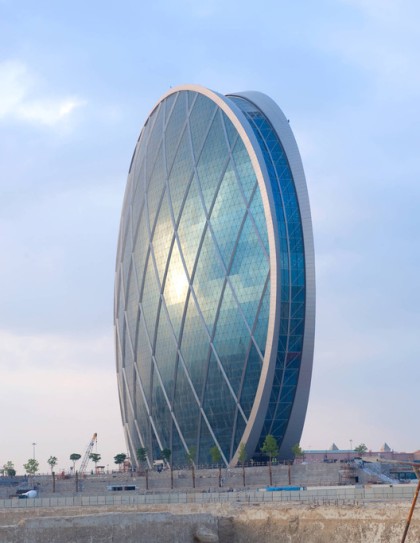 The Aldar Building – downloaded from the company’s web site – this is the picture that I was trying to take . . .

Abu Dhabi is expanding with the reclaiming of land from the Persian (Arabian) Gulf.

New homes built on reclaimed land – they did look nice.

Overall the tour was interesting, even if we did get a lecture / chat about Islam on our return journey to the ship.
We had a very similar lecture by our guide when we returned to the ship in Aqaba, Jordon, which makes me wonder if this type of lecture / friendly chat is a deliberate plan to get a certain point across to westerners.
I had the feeling that the delivery and content of the ‘friendly chats’ had been agreed in advance, between whom, I don’t know. If I am wrong then the delivery of the two ‘chats’, within nine days, and so very, very, similar, yet so far from each other (Jordon & UAE), was a remarkable coincidence.