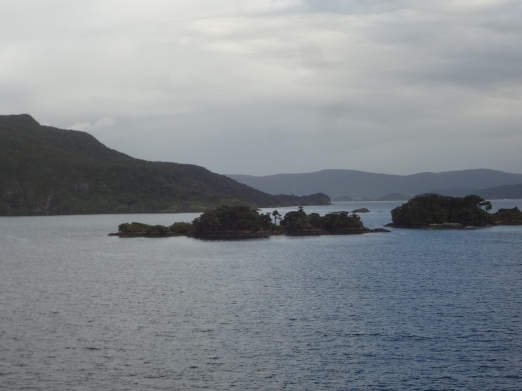 Approaching the entrance of the first fjord that we visited  – Dusky Sound – at 8.15 am. The following few hours saw us cruising through Breaksea Sound and Doubtful Sound. 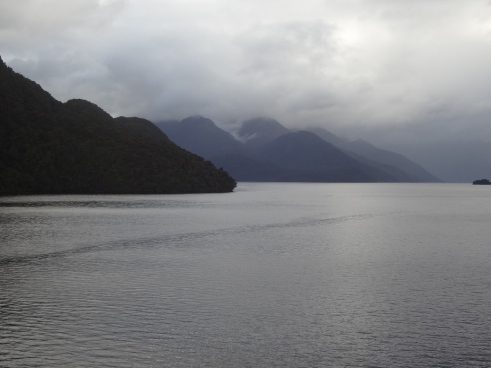 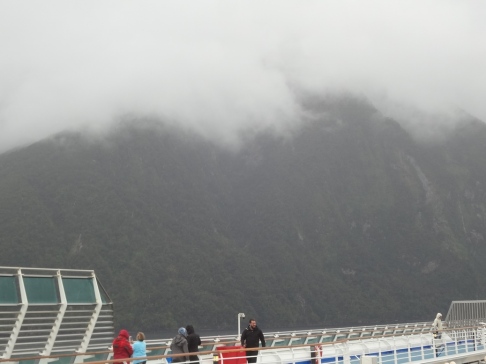 The mist hung around the peaks. 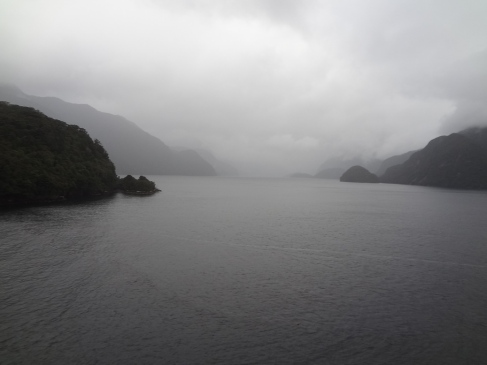 The deck was a favourite place for most of the passengers – stereo clicking of cameras never stopped. 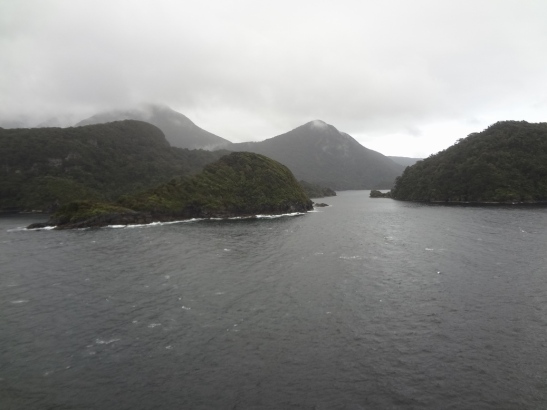 We were aiming for the gap. 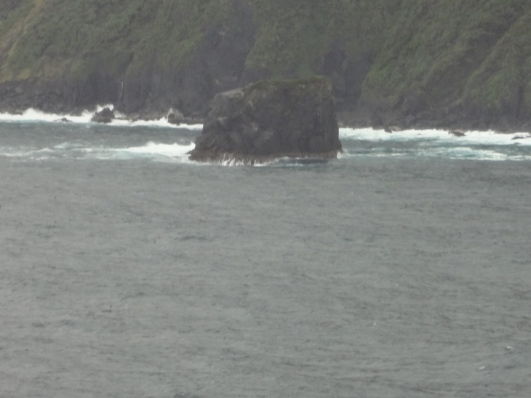 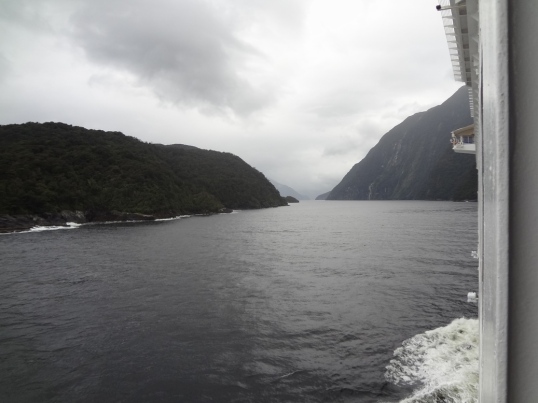 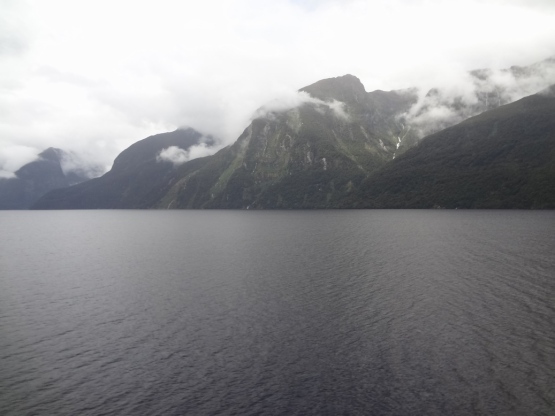 A picture is worth a thousand words . . . as we enter Milford Sound. 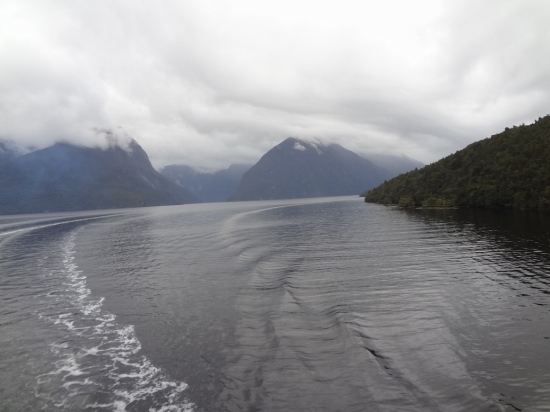 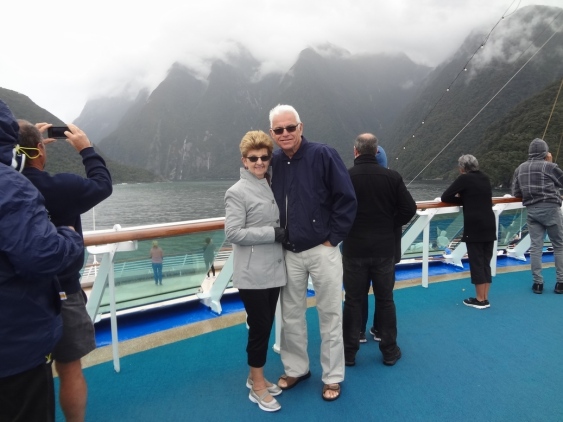 A bit nippy, but we wouldn’t have ‘mist’ it for the world. 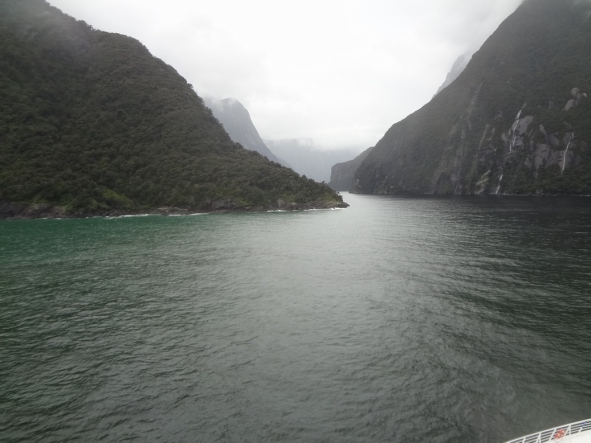 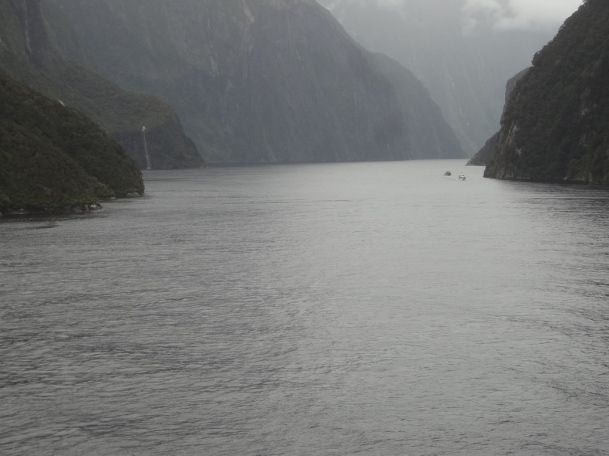 Small pleasure craft on the right. 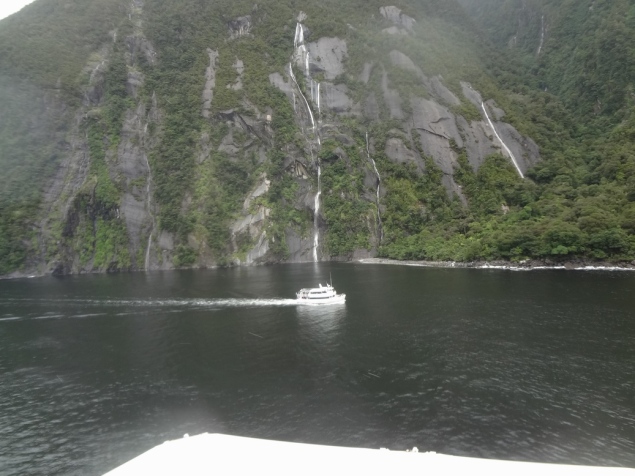 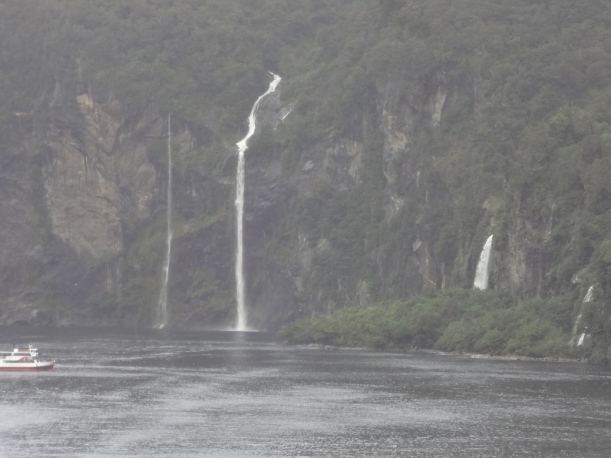 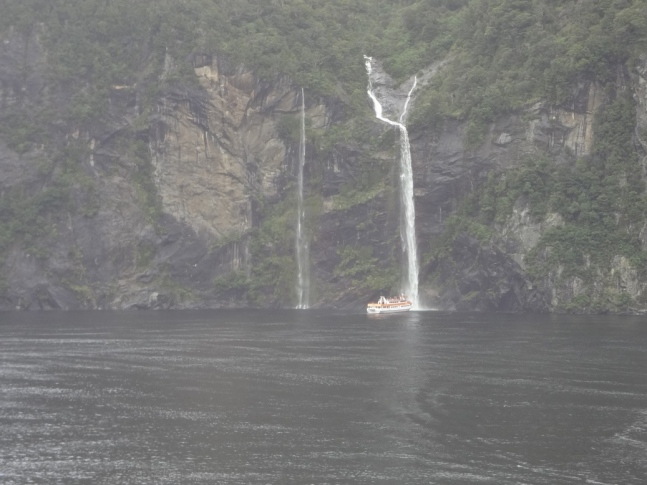 They had a system of handing out tots of whisky to anyone who wanted to try their luck at gaining a drop or two of water to add to the whisky from the waterfall. I think it had to be from the waterfall, not the side spray. Not sure what the prize was if you managed to get the correct amount of water and not lose any whisky. 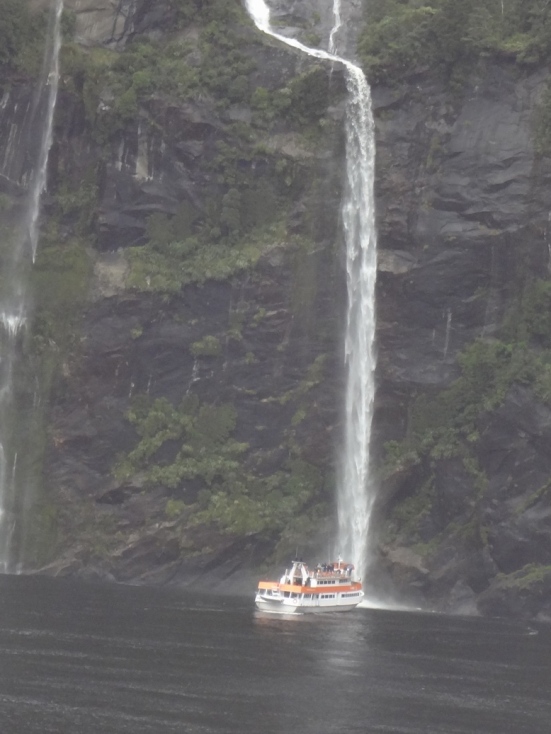 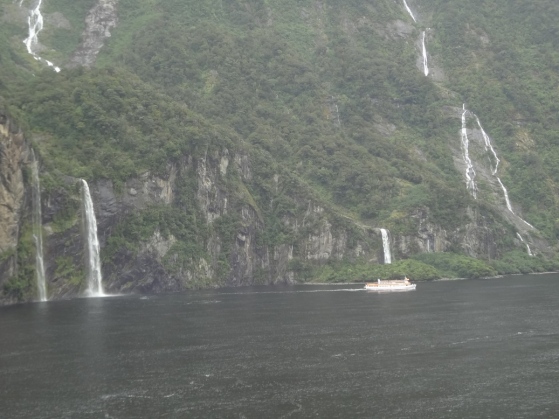 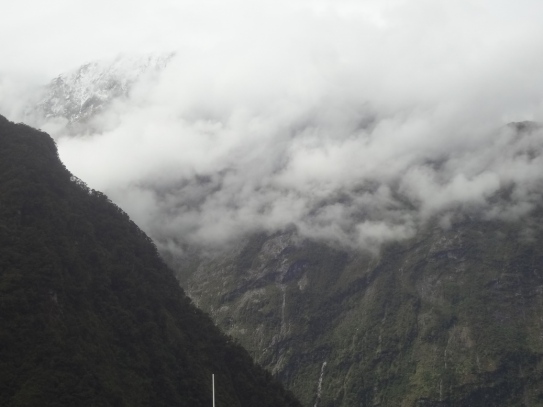 So much for summer you can see the snow on the hills (top left). 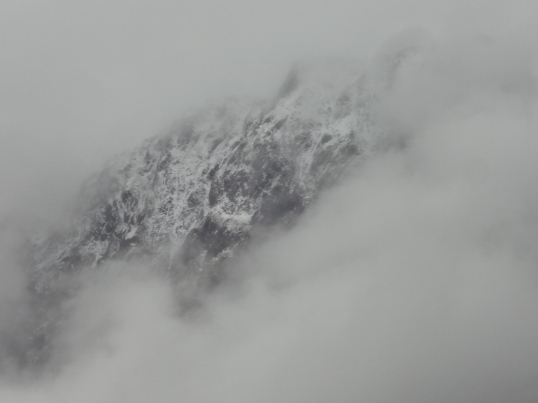 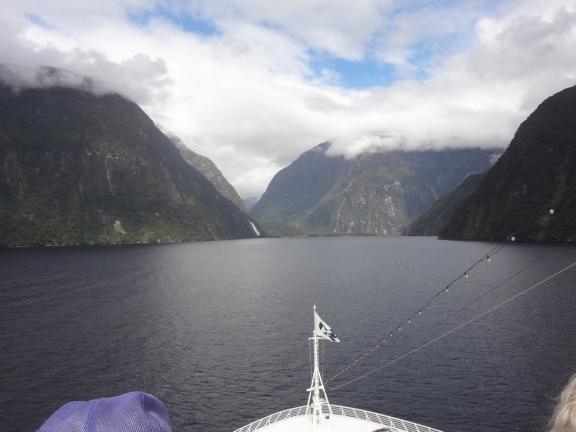 Milford town right ahead – to get to Milford  you can fly in by small plane, we did see a helicopter flying around, but I am not sure if it was a taxi from Queenstown or a sight seeing helicopter. You can walk in by the Milford Track – five day four night walk – or drive from Queenstown to Milford, four hours. 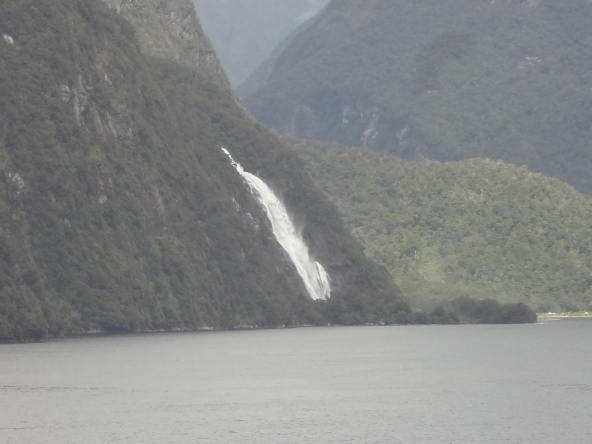 This waterfall also has a small hydro system that supplies electricity to Milford. 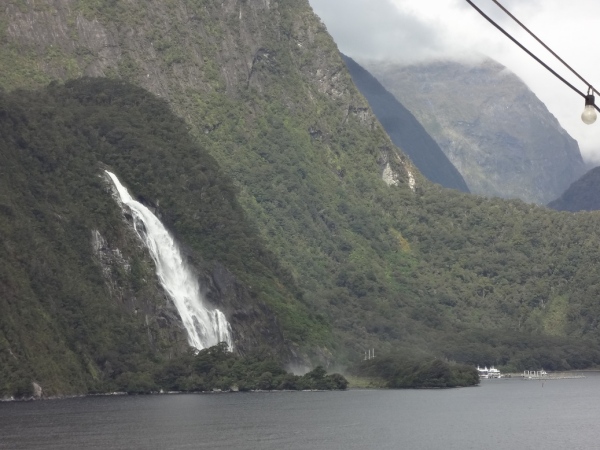 A little of Milford can be seen on the bottom right. This is as close as we would get. Using her bow and stern side thrusters the Dawn Princess turned on the spot. 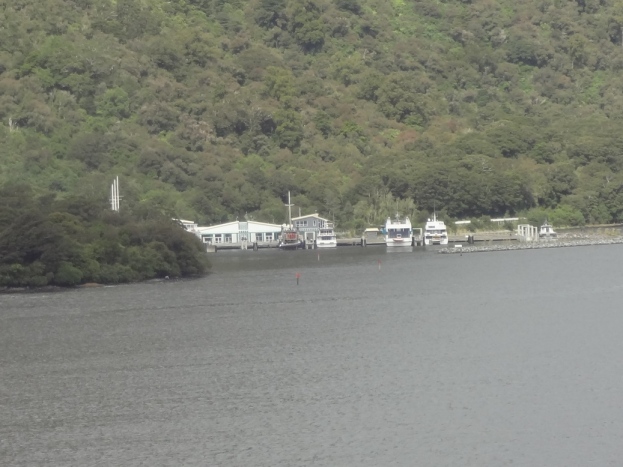 As we turned Milford came in to view. 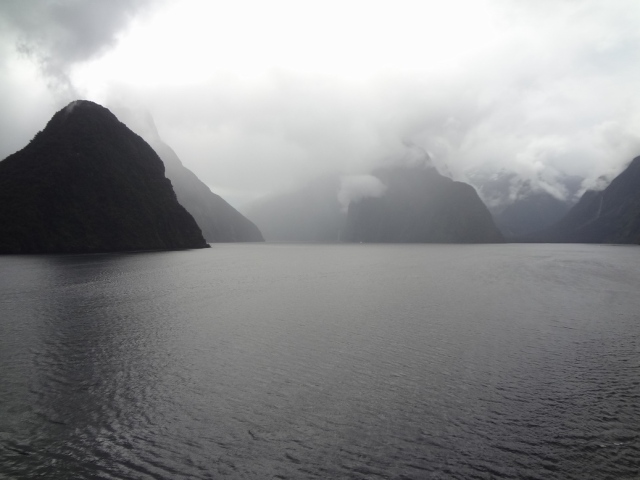 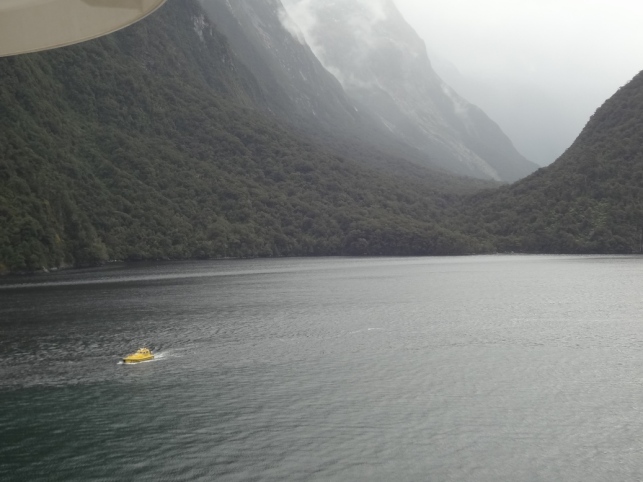 Not again, another Yellow Submarine.

The yellow boat is the pilot boat. We had a National Ranger on board who spoke of the various Sounds and how they came about as well as other points of interest etc.
We also had a pilot onboard and the yellow pilot boat followed us as we made our way to the open sea. 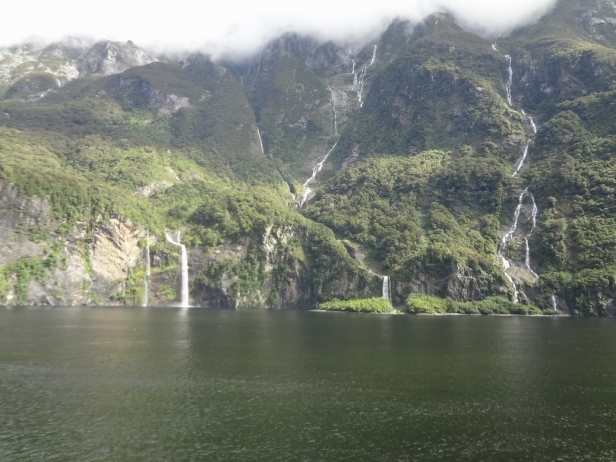 As we steamed out the sky started to clear. 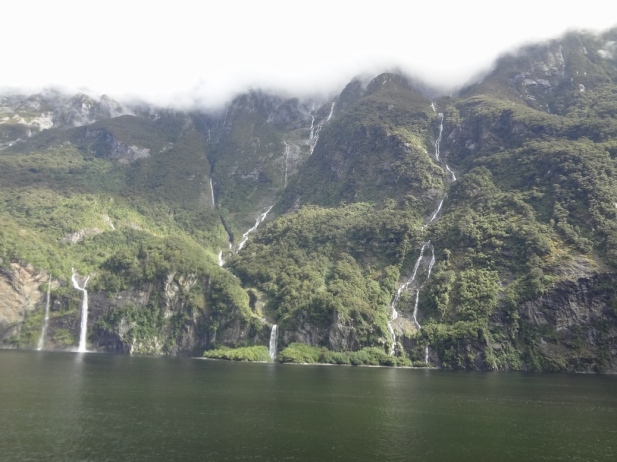 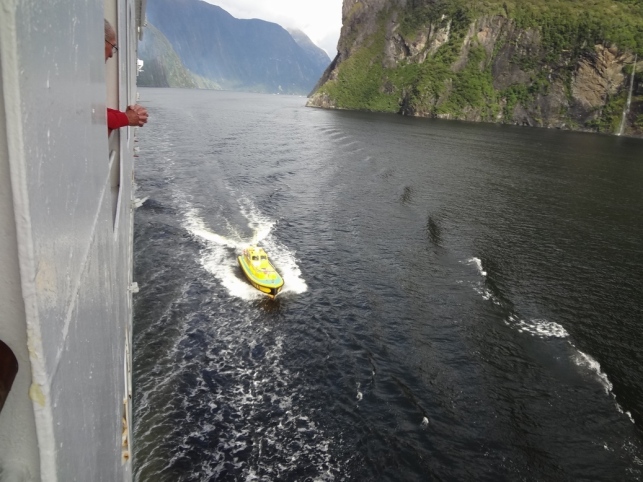 We reached the sea and the pilot boat came alongside to take off the pilot and the ranger. I was pleased that it was not all that sunny, because I found the whole experience quite dramatic.
Later I spoke to some of the ship’s staff in the tours department and they commented, without knowing my thoughts, that they preferred the visit when it was not all that sunny because they liked the drama of the changing mist.