Thanks to Covid Maureen and I were unable to spend our Emirates frequent flyer points, which we had saved for a trip from Singapore to Sydney after cruising to Singapore.
We were keen to spend the points before they were cancelled by the airline.
After considering several options we finally decided to spend them on accommodation, but where should we go . . .

In 1988, along with our children, we had driven to Brisbane for Expo 88, and to break the journey of over 12 hours driving, we stopped overnight at Port Macquarie and promised ourselves that we would return one day.
It took us 34 years before we returned, and this was all thanks to Covid.
The drive from home to Port Macquarie earlier this month took us five hours, the distance being around 460 km (285 miles) – the drive through Sydney before we could use the freeway was time consuming.
Between Maureen & I we had over 100,000 points so with a little extra cash (about$260) we were able to book a week’s holiday in an apartment in a resort, which was across the road from the beach – the beach is named Flynn’s Beach, after John Edmund Flynn a local surveyor who built his home not far from the beach in 1891. Flynn’s home is still standing so more of that in another post.
The resort that we picked is named Flynn’s Beach Resort, which is across the road from Flynn’s Beach. 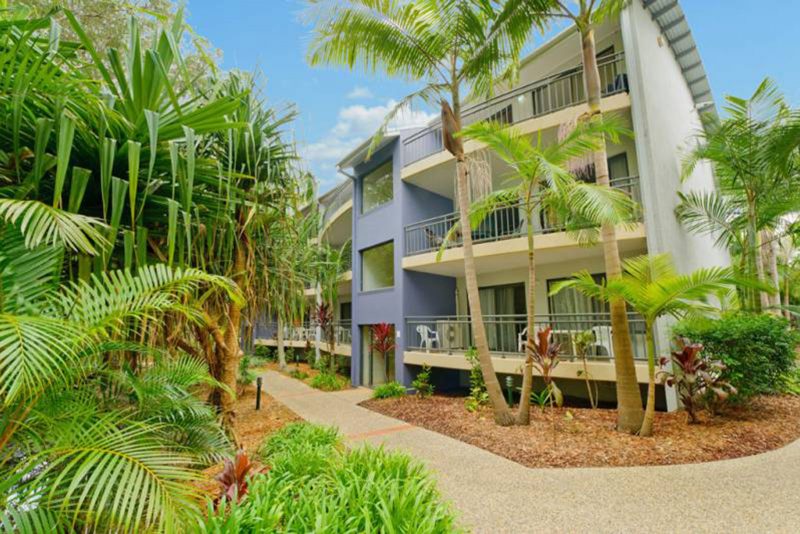 The above has been copied from the Resort’s web site 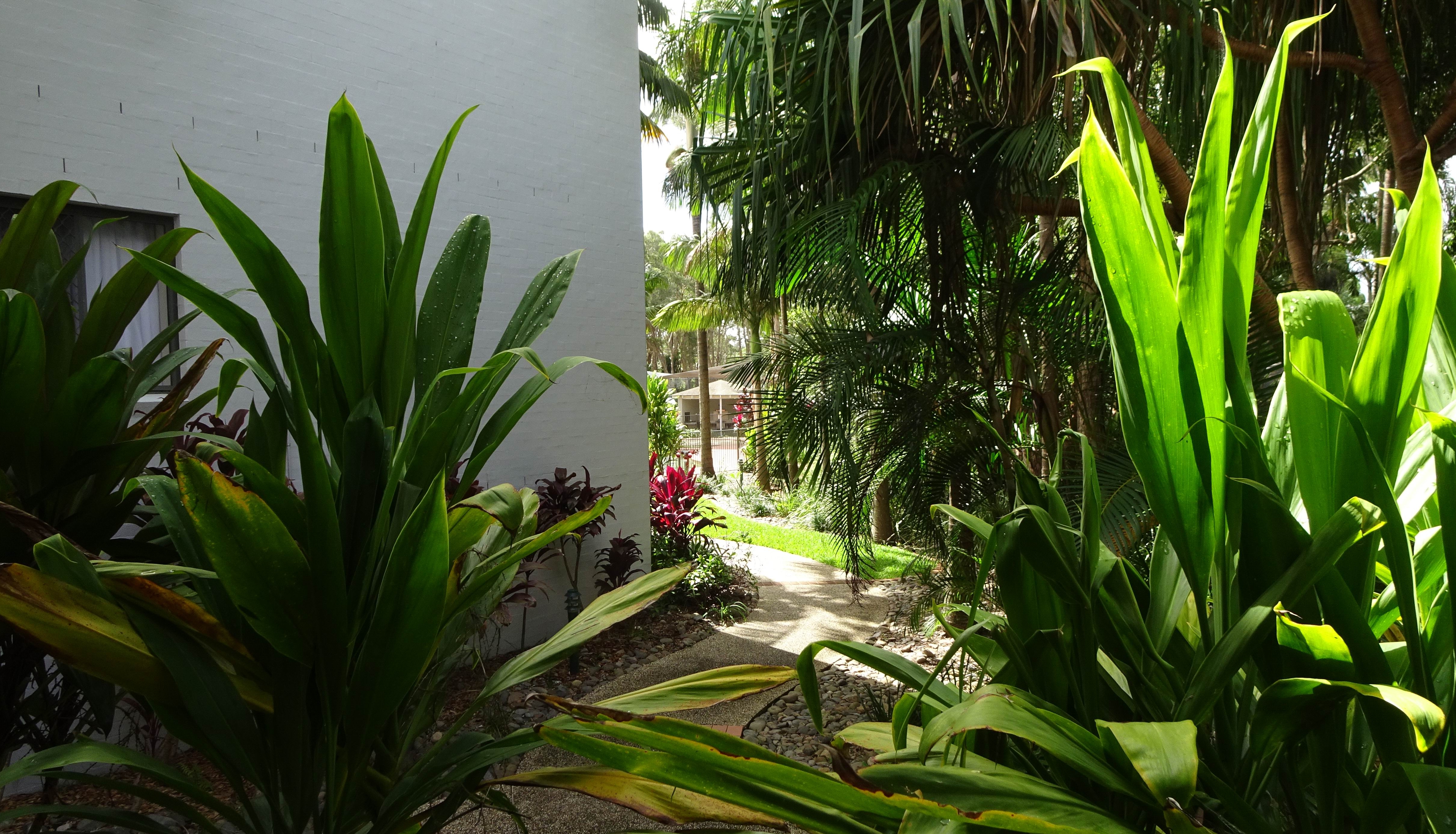 The above two pics show the view from our balcony

We had a table and chairs on our own balcony.

Due to Maureen’s health we picked a ground floor apartment to avoid her having to climb too many stairs.

Within the resort there were gardens and wildlife, the owners have managed to marry a natural small lake and a flowing creek with a commercial business. The gardens are well kept and as Maureen and I walked by the creek we saw bush turkeys, water dragons, goannas, and ducks. We were told that koalas and possums also lived in the resort. 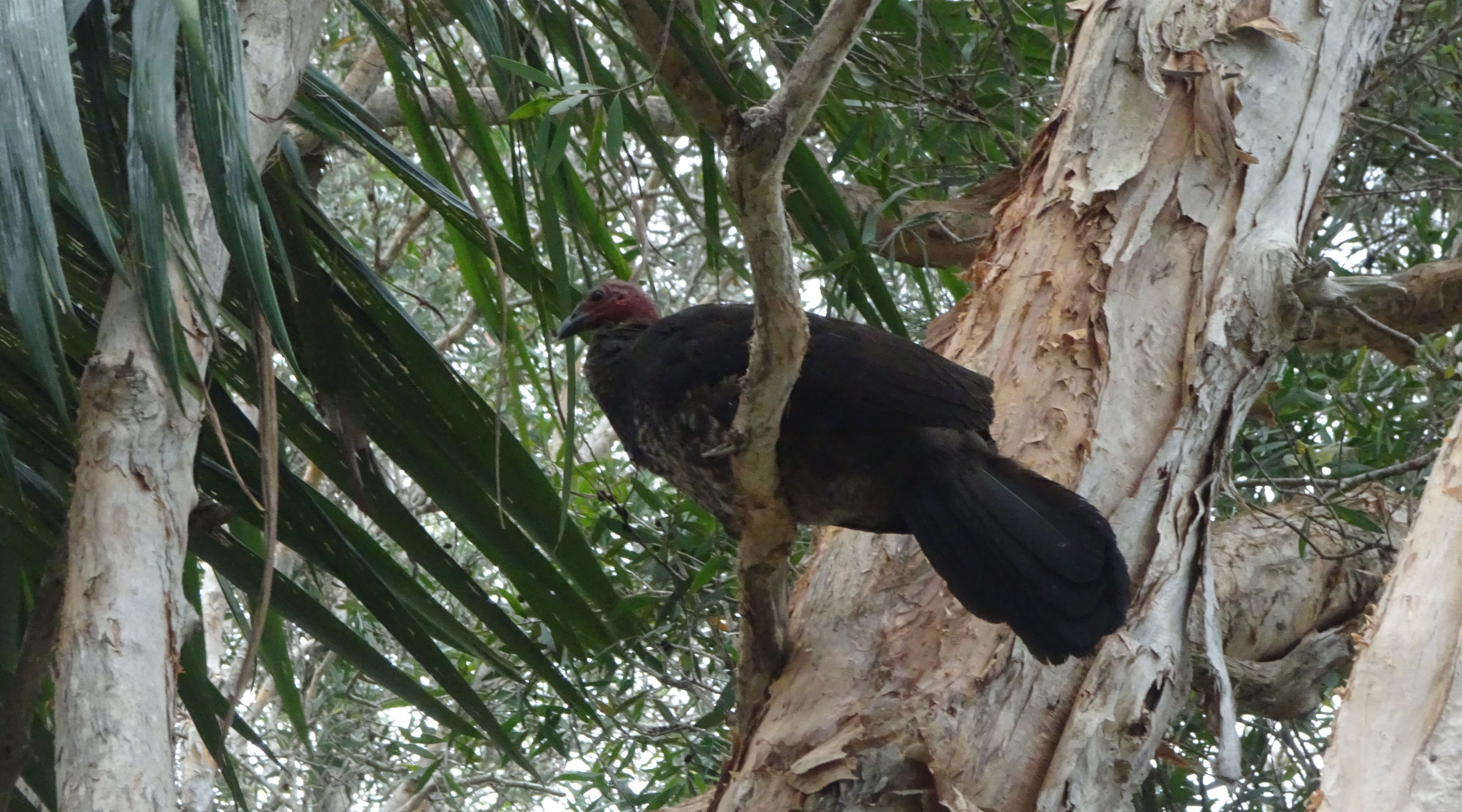 Bush turkey – not known for being ‘brainy or handsome’ but it is a survivor. These birds are born in a moist mound of decomposing leaves and struggle to avoid predators.
The male bird builds a nest in the decaying leaf clutter and invites the females to lay eggs and the male then keeps the nest at the correct temperature by moving the decaying litter on and off the nest to keep the correct temperature.
The nest can be anything from 1 to 1.5 mtrs tall (3 to 5 feet) and there can be up to 50 eggs in a nest (if he is popular with the ladies). Once hatched and the chicks’ feathers have dried they can fly.
They have enemies, but they are not too frightened of people because they will steal food if you are having a picnic.

The creek flowing from the small lake.

Guaranteed to make you jump when he moves, a goanna or Monitor Lizard, they will eat anything that they can catch and swallow.  They were once a traditional food source for the Aboriginals and are often represented in Dreamtime stories. 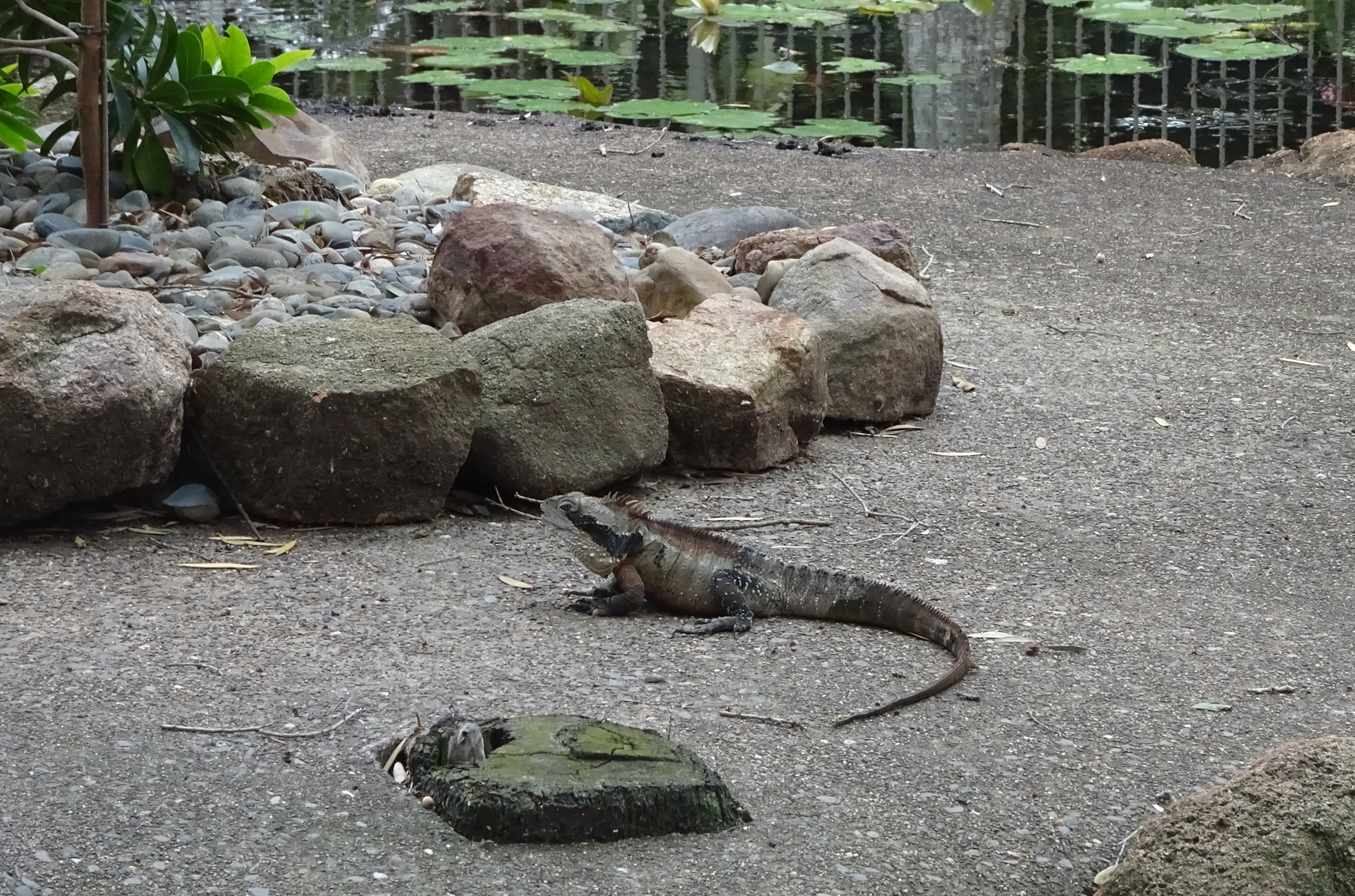 Water dragon – these creatures are shy but have adapted to living with humans in parks and obviously Flynn’s Beach Resort. 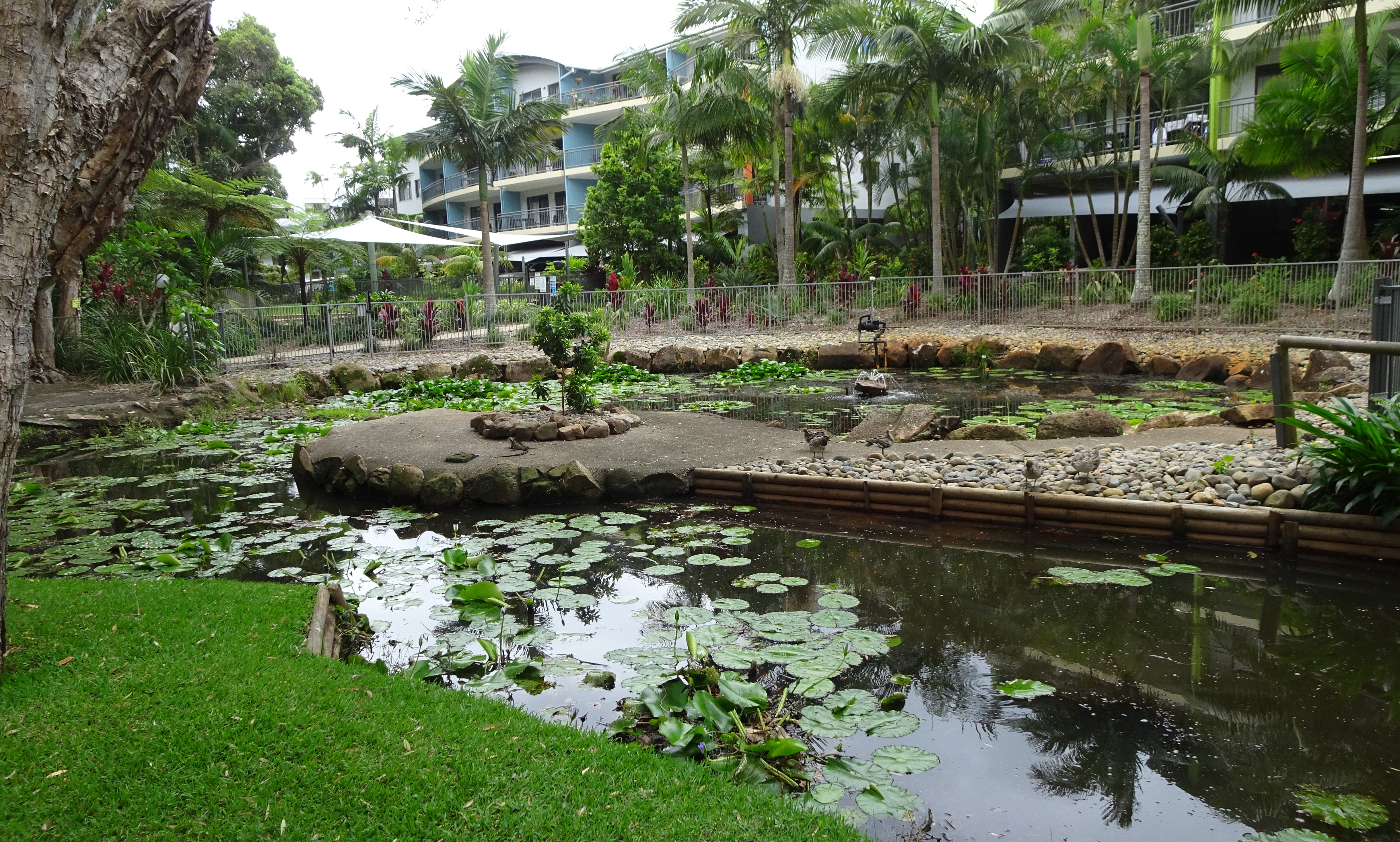 A general view to show how the apartments are located to the creek and small lake area. 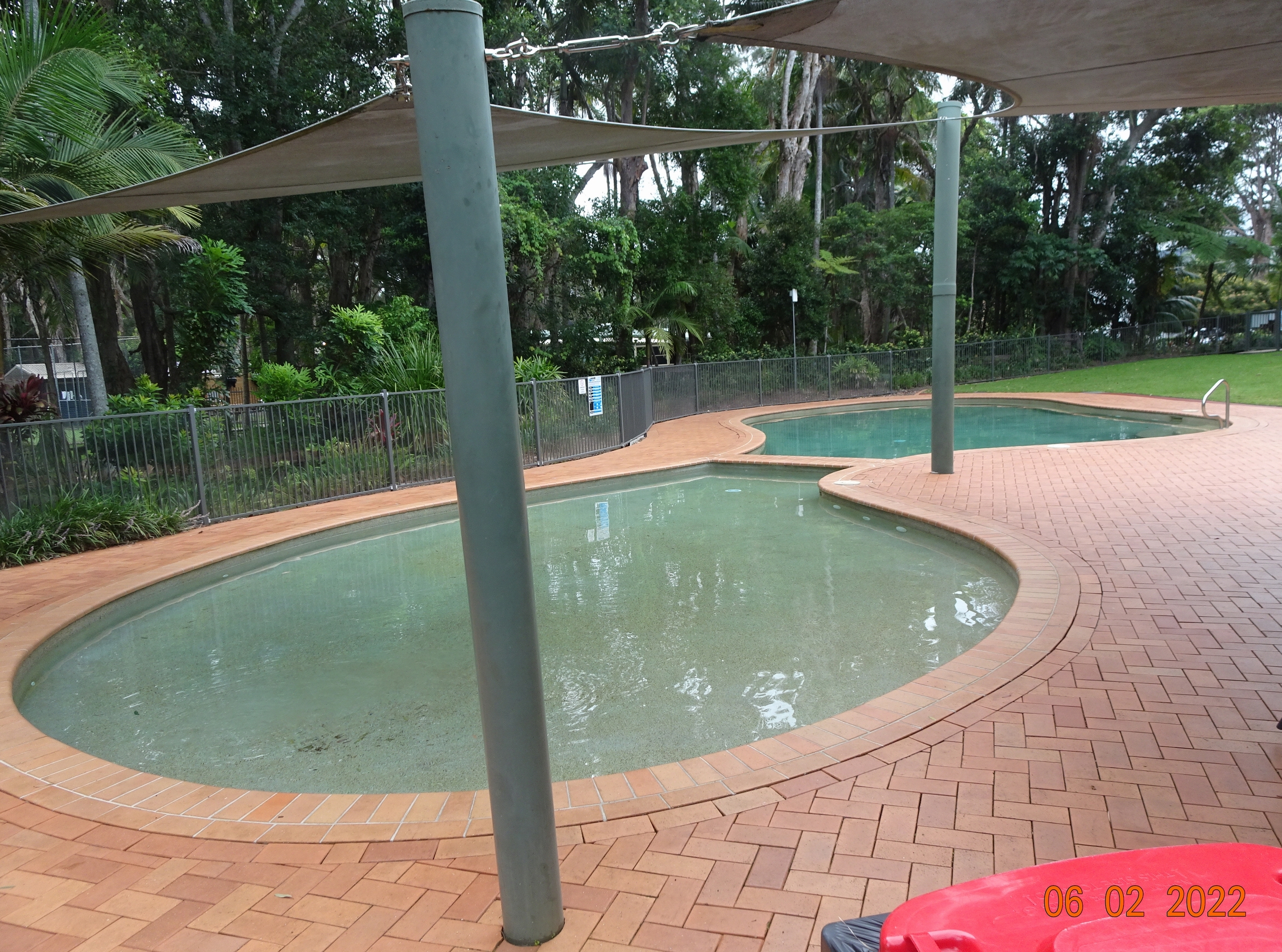 The children have not been forgotten –

nor the adults – both pools heated when required.

The photo above is our apartment showing the living room and behind me when I took the picture is a dining area. We had two bedrooms, one with a double bed and the other with two large singles.
The kitchen was to the left of my photograph – as you can see there is shelf access to the living room for convenience. All in all it was a good size accommodation, which would have been big enough for a family with children, or another couple to share the cost.
The kitchen had everything we wanted from fridge freezer to microwave and full complement of crockery and cutlery. 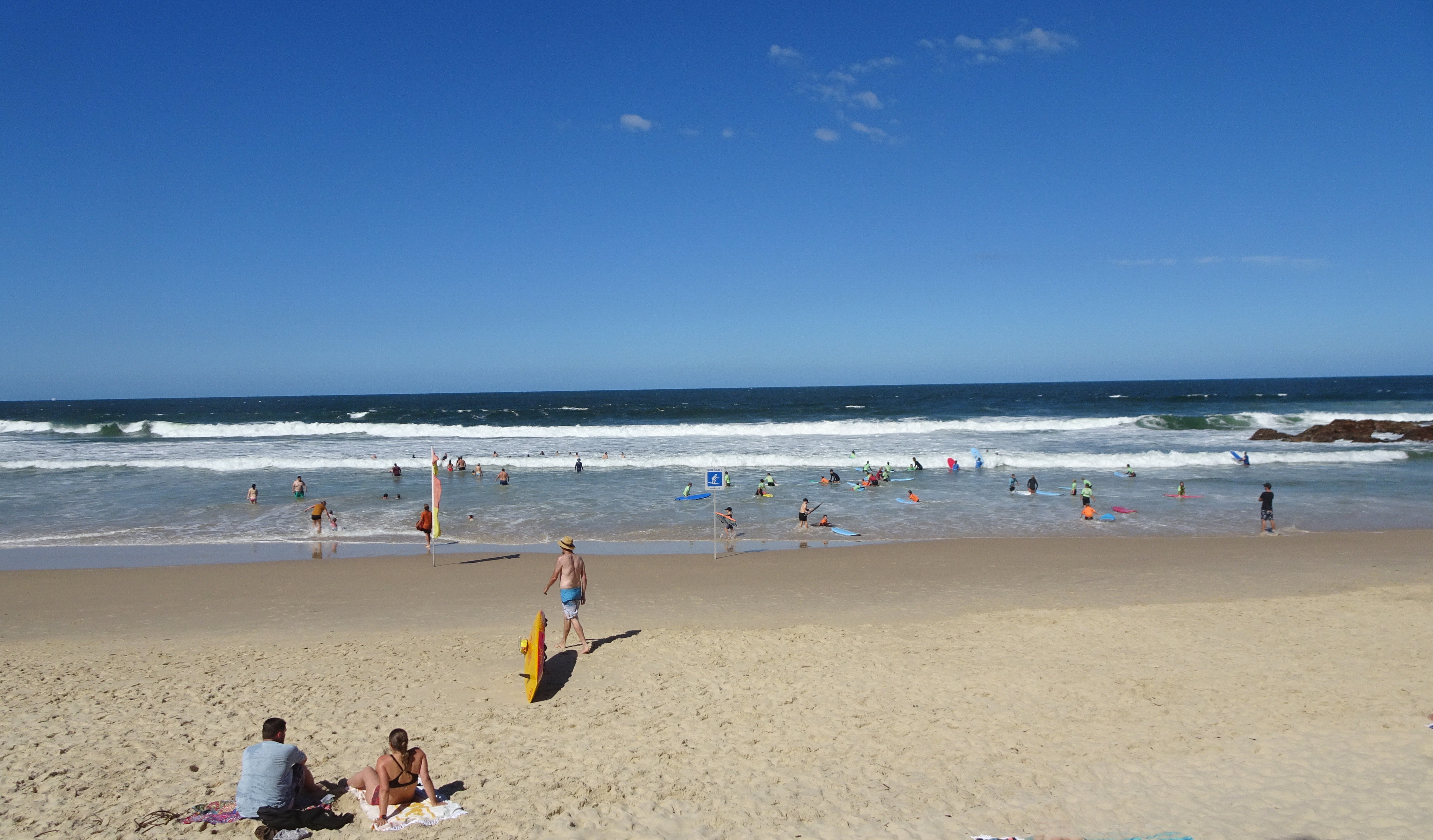