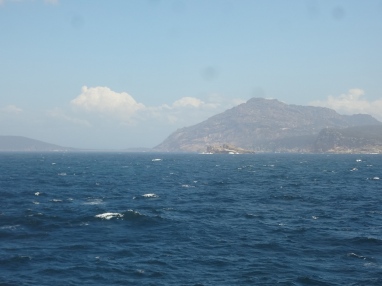 I must go down to the seas again, for the call of the running tide
Is a wild call and a clear call that may not be denied;
And all I ask is a windy day with the white clouds flying,
And the flung spray and the blown spume, and the sea-gulls crying.

Ah! what pleasant visions haunt me
As I gaze upon the sea!
All the old romantic legends,
All my dreams, come back to me.

The Secret of the Sea – verse one – Henry Wadsworth Longfellow. 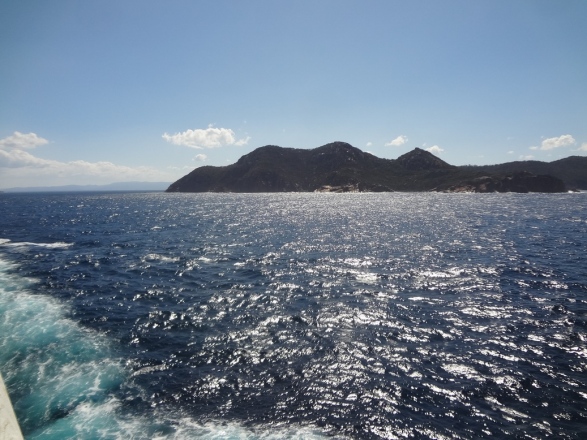 “Wouldst thou,”–so the helmsman answered,
“Learn the secret of the sea?
Only those who brave its dangers
Comprehend its mystery!”
The Secret of the Sea – verse eight – Henry Wadsworth Longfellow. 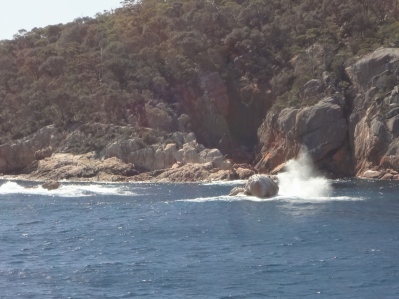 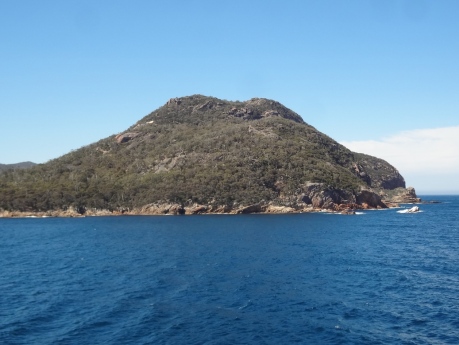 Peaceful and calm as we enter the Bay. 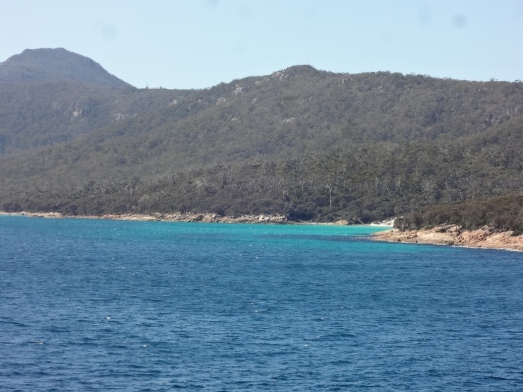 Clean, clear water – ‘civilisation’ has yet to arrive. 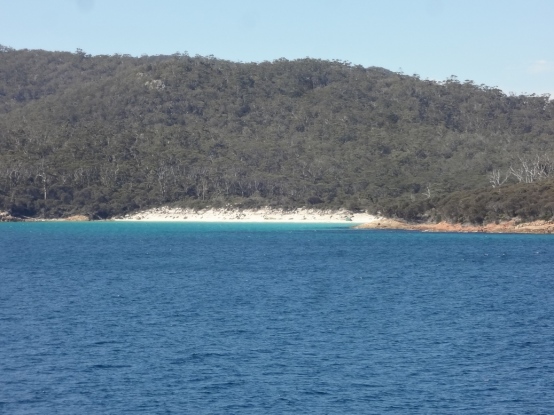 Like the long waves on a sea-beach,
Where the sand as silver shines,
With a soft, monotonous cadence,
Flow its unrhymed lyric lines;–
The Secret of the Sea – verse four – Henry Wadsworth Longfellow. 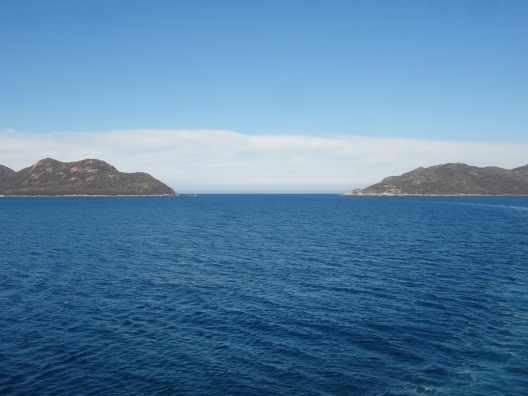 The entrance through which we passed to enter Wineglass Bay. 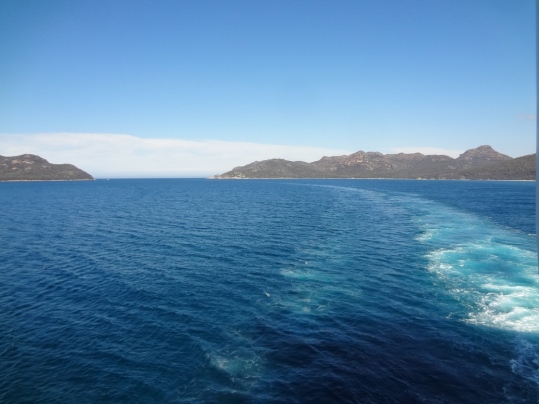 Blue on Blue with our wake drifting astern. 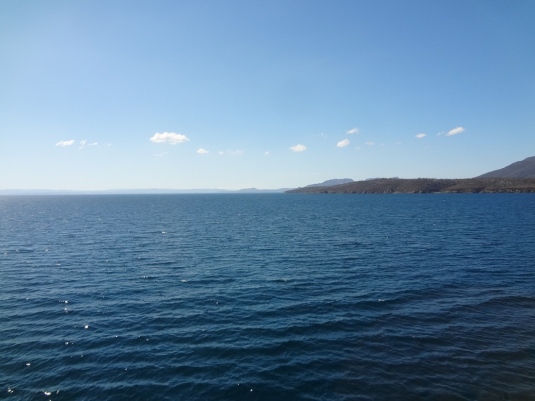 At peace with the world – our ship is hardly moving. 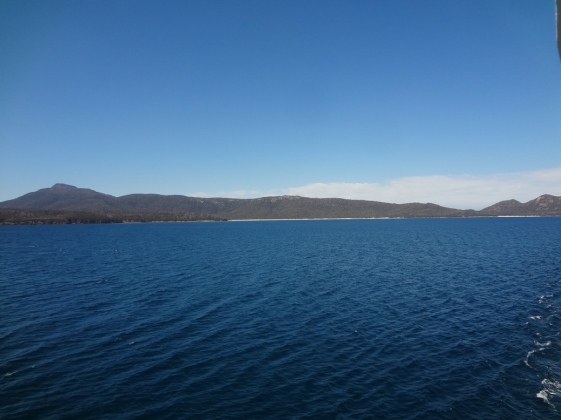 We curved through Wineglass Bay, followed by Oyster Bay, and exited via another gap in the coastline. 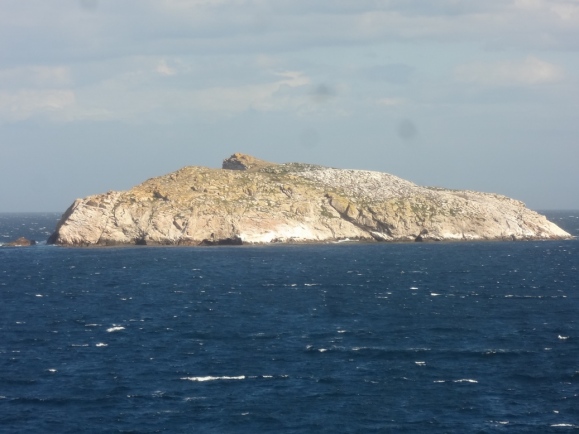 White caps can be seen as we leave the shelter of the Bay and head out to sea. 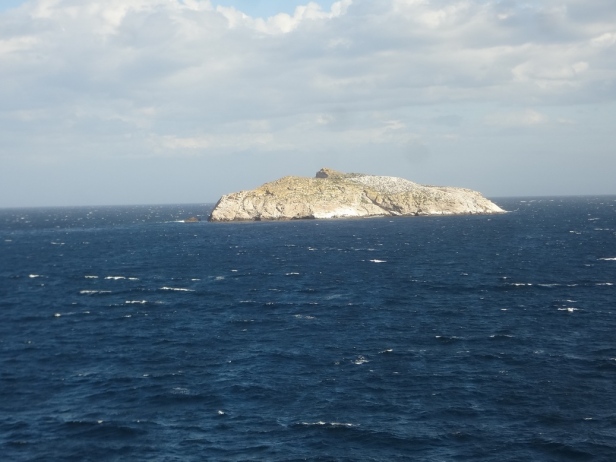 Till my soul is full of longing
For the secret of the sea,
And the heart of the great ocean
Sends a thrilling pulse through me.

I must go down to the seas again, to the vagrant gypsy life,
To the gull’s way and the whale’s way, where the wind’s like a whetted knife;
And all I ask is a merry yarn from a laughing fellow-rover,
And quiet sleep and a sweet dream when the long trick’s over.

Nice and quiet at night in the middle of an ocean, when you touch the stars, because they were so clear, and so close. 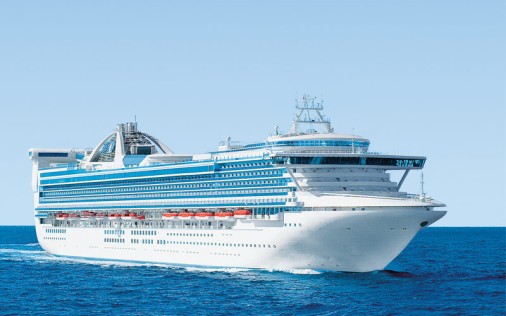 Seven of us are off on a short cruise next week to Tasmania, a place that neither Maureen or I have visited. The cruise is just a week, and for us it is a taste of the Apple Isle, which might convince us to return later for a driving holiday. 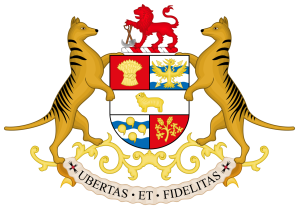 Tasmania’s coat of arms, and the meaning of the moto being, Fertility and Faithfulness.

And now for a real Devil.

In 1803 a small detachment was sent from Sydney to the island, because French explorers were investigating the southern coast of Australia, during the time when Great Britain was at war with Napoleon. The British, in Sydney, wanted to make sure that the French did not lay claim to the island. At that time the island was considered as part of New South Wales.

In 1642 the island was been named Van Diemen’s Land by Abel Tasman. This naming was in honour of Anthony Van Diemen who was the Governor General of the Dutch East Indies, who had sent Tasman on his voyage of discovery. The island did not become Tasmania until 1856, after petitioning Queen Victoria for the name to be changed. 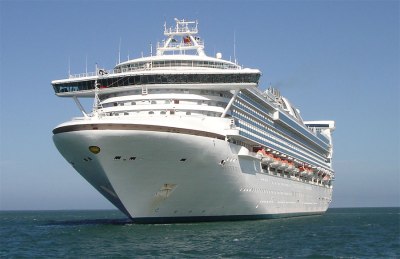 Golden Princess was built in Italy and was launched in 2001, she is 108,865 gt and has accommodation for 2,600 passengers. She is registered in London, UK.
Her last refurbishment was in May 2015, so the smell of paint should no longer be around.
I have read that it is planned for the Golden Princess to be transferred to P & O Australia in 2020. One has the feeling that it is my fault that ships, in which Maureen & I sail, don’t stay long after our cruise before Princess Cruises move them over to P & O.
Dawn Princess, in which we sailed last February is now Pacific Explorer under the P & O Australia house flag, and now I read that Golden Princess will follow.

We sail from Sydney and return to Sydney exactly a week later. Our first port of call will be Melbourne, and as we have all either lived in Melbourne or visited the city, I doubt that we will do anything more exciting than to visit Queen Victoria Market. 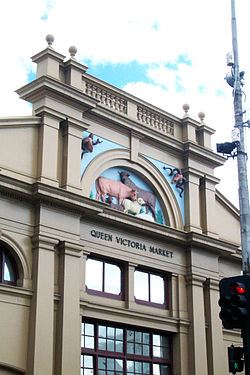 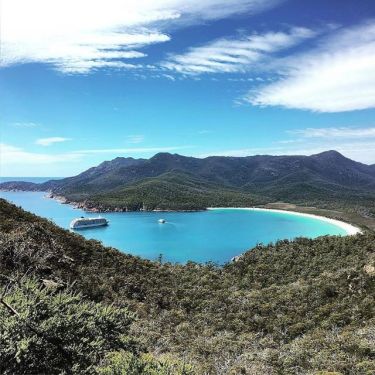 With a bit of luck, we might be able to share Oyster Bay, New Zealand with Oyster Bay, Tasmania.

We then cruise to Port Arthur, which used to be a 19th century penal settlement. We will anchor off and go ashore by tender. 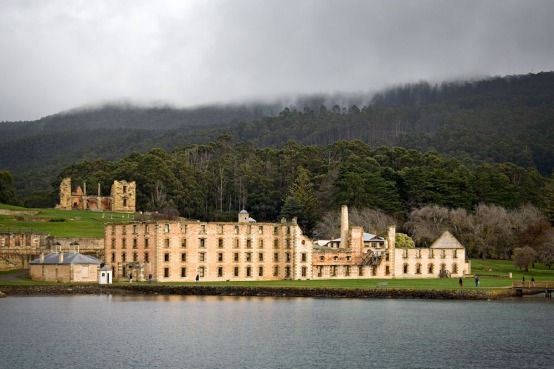 Next stop is Hobart, the capital city of Tasmania. Originally called Hobart Town, or Hobarton, so named after Lord Hobart, who was the British secretary of state for war and the colonies. 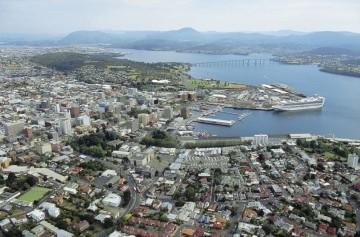 We stay overnight and then sail for Sydney the following evening.

Arriving Sydney at 7.00 am on Wednesday 01 November.