Thirty six hours after disembarking our first Baltic cruise students we embarked another full complement for our second cruise to the Baltic.

For this cruise our first port of call was Stockholm; what a beautiful interesting city.

We arrived off the coast of Stockholm during the night, and picked up our pilot and sailed quietly through the archipelago of the many islands that stretches 80 km offshore.

By sacrificing some of my night’s sleep I was able to make out, what I believe was the distant northerly lights of the Aurora Borealis. We hadn’t reached the man made lights of Stockholm and the night was free of light pollution. When it is full summer, which means hardly any ‘night’, it is very unusual to see the Aurora Boreslais.

The above picture is from the internet to try and illustrate what I saw, but I saw the ‘light’ well before we reached the light pollution of Stockholm.

Dawn came up before 5.00 am, which ended any further chances of seeing the Northern Lights, but instead we had the city of Stockholm waking for a new day.

During the tour of the city we visited the Vasa.

The Vasa was a sailing ship that sank in 1628 on her maiden voyage just 1400 yards in to her voyage.
Her guns were removed in the 17th century and she was left to rot until she was found again in the late 1950’s.
She was salvaged in 1961 and placed in a special building where the ship was sprayed with a chemical to stop her rotting away in the air. The mist in the above photograph is the chemical spray.
When I saw her in 1965 we were able to walk around the outside of the vessel on a special suspended catwalk.
Today, if you wish an update of the Vasa click on the link for the blog about our visit in 2018, it was a wonderful experience.
The image of the ship had been in my mind for over fifty years and in 2018 I was fortunate to revisit the Vasa.

We stayed overnight is Stockholm and sailed the following evening for Leningrad.

On arrival in Leningrad (now called St Petersburg again) at 6.00 am, we were greeted by hundreds of school students, dressed in gym wear, running around a large concrete area alongside to which we berthed. We were not in the cargo area of the port, nor where we in a cruise area, (if they had one in 1965), so I assume that because we were carrying so many students, we berthed at a special wharf to maximise the propaganda aspect of our arrival. We felt sorry for the gymnasts because it was quite cold at 6.00 am, even in May.

The athletic exhibition carried on for about an hour, after which the athletes left the area in a disciplined manner.
After about twenty minutes I think most of our students had left the viewing deck, partly because it was cold, but more likely for their breakfast.

The flag of the USSR in 1965 – one didn’t feel welcome, and the cold war was still on going.
The Cuba missile crisis with the US was only two and a half years earlier, in October 1962 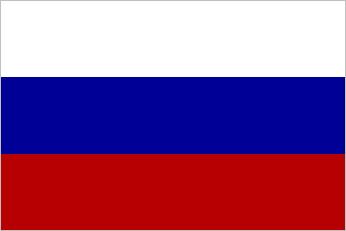 The current flag, which is less threatening . . .

Later in the morning a fleet of coaches arrived to take our students on an educational visit around Leningrad.

As the students disembarked, I noticed that many had bulging pockets, but thought nothing of this as they were ‘children’ around thirteen or fourteen and many kids carried junk in their pockets. It was only later that I found out that some of the Scottish students had already completed a cruise a year earlier and had visited Leningrad. This time they had come prepared with their pockets full of ball point pens, Bic Biros we used to call them, which they sold to local Russians for a very fat profit. I don’t know if they received rubbles or dollars for the pens. Others had common cheap items, pencils, rubbers (erasers if you are from the US), bought cheaply from the likes of Woolworths in Scotland. I had a lot to learn from these Scottish ‘students.’

As an aside – in 1965 the French ministry of education approved the Bic Cristal for use in classrooms.
In 2006 the Bic Cristal was declared the best selling pen in the world after the 100 billionth was sold.
When I was at school we were not allowed to use ‘ball point’ pens on account that it would ruin in our handwriting. We could use fountain pens or the pen & nib and dip it in to an inkwell – for those who are younger than fifty years of age, you might not know what I am talking about . . .

Once again I scrounged a seat on the students bus and went ashore for the tour, and of course we all visited the Winter Palace, which was a fascinating place and the Russian guide was able to bring the whole tour to life. She did such a good job extolling the virtues of the Tsar I wondered if she really was a communist. 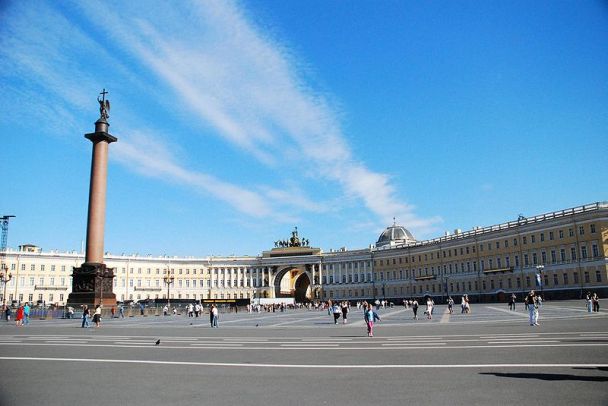 The Palace Square of the Winter Palace.

After we left the Palace we made our way along the river bank to the bridge called Troitskiy Bridge near Liteyny Avenue. The bridge is now called Trinity Bridge, and was opened in 1903, to commemorate the 200th anniversary of the founding of St Petersburg (Leningrad in 1965).

The bus stopped and we exited the coach to hear more about the sites of Leningrad. Towards the end of her talk I asked if there was a toilet nearby and the guide waved her hand in the general direction of Liteyny Avenue. I crossed the road and looked for the international signs of a gent’s toilet. Not seeing one I entered what I thought was a commercial building thinking that the toilet would be on the ground floor. The existence of guards on the door was not unusual, so I just walked in as if I knew where I was going. I found the toilet and entered the gents and stood on the high step near the urinal and then noticed that due to the low separation wall and the high step all the men could see into the ladies toilets, which was a little disconcerting as many were occupied.

As I came out of the gents, I was grabbed by two security guards and frog marched to the door and thrown out, with what I assumed was great abuse, but the abuse was all in Russian and wasted on me.

On returning to the coach I commented to our guide on my experience and she went white. She immediately made sure all her passengers were on board and ordered the driver to drive quickly out of the area. It appears that I had wandered in to the ‘Big House’, which was a euphemism for the KGB building in Leningrad!
I have my doubts that it was the KGB Big House, but after she told me what she thought, I was still glad that the bus was speeding away from the area.

The wide boys of Scotland must have passed on their entrepreneurial spirit to me, because I managed to swap a ball point pen for the red metal cap badge off one of the guards on the dock gates. I’d bought a ‘fur’ hat in Philadelphia when on the tanker (Ellenga) and I’d always wanted the red badge to attach it to the front of the American hat to create a ushanka (which mean ‘ear hat’ in English) – now I had one! I still have the hat, but have miss placed (lost) the badge.

The main difference between my hat and a real ushanka is that the ear muffs on my hat clip together, rather than being tied as per the Russian picture.

Isn’t politics a stupid game  . . when I was at sea I carried three main ID documents – passport, discharge ‘book’, and a seaman’s card. 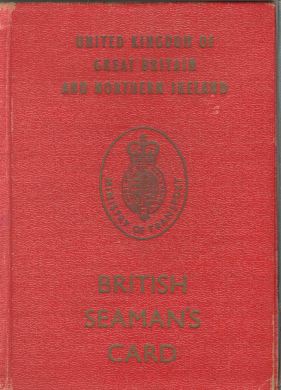 On arrival in China I used my seaman’s card and not my passport, because I knew that the American authorities were not happy to allow anyone to visit the USA with an entry visa for communist China in their passport. You’ll note that the card is red – how convenient. 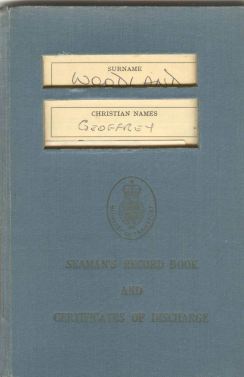 In the USSR ( Russia) I used my Discharge book  when landing in Leningrad, because the Chinese and the Americans didn’t like a Russian entry stamp in ones passport. The blue discharge book also has a place for my ‘Christian’ name, which is very un-PC in today’s world. 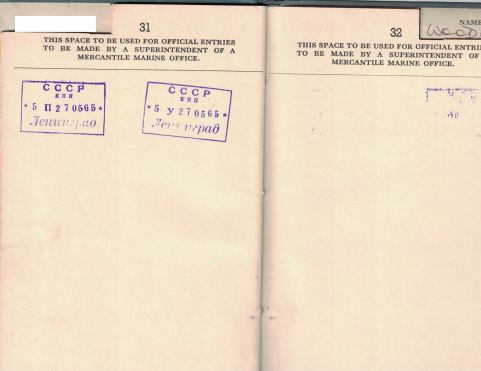 I still have my discharge book with the USSR stamp for my visit in 1965.

The daft thing is that all three countries the USA, China & the USSR knew which book to stamp so as not to cause offence to the other  . . .

I used my passport when going ashore in the US, which at that time, didn’t require a visa.

We sailed at midnight for Copenhagen. I’m pleased that I saw a little of Leningrad, but can’t say I was unhappy to leave. Copenhagen was a huge difference to Leningrad with the multi-coloured buildings, Tivoli Gardens and an open and happy feel to the city.

The negative feeling of Leningrad returned in 2018 when Maureen and visited St Petersburg (Leningrad). It was something that I just can not put my finger on . . . I suppose the guide we had in 2018 said it best, that they look forward to summer for nine months of the year, and then spend three months being disappointed.

Next stop was Grangemouth on the Firth of Forth in Scotland where I paid off the Dunera  and dragged my suitcase on and off trains for the next nine hours. The suitcase didn’t have wheels in those days, so had to find a trolley & lifts at each station that I visited. . . .

My first train was from Grangemouth 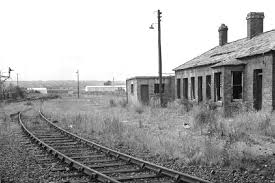 Grangemouth station just a couple of years after I waited for a train.

so as to catch another train to Edinburgh, 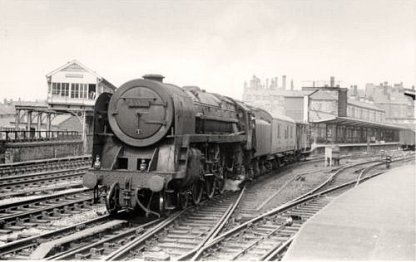 where I had to walk half a mile dragging my case to the underground metro system for the train to Birkenhead Park, which was the nearest station to my home. 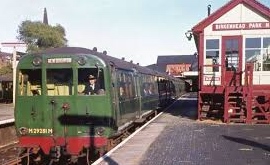 All of the above trains station pictures have been taken from the internet for 1965 or ’68 for Grangemouth
Liverpool Lime Street is now part of the underground system, but it wasn’t in 1965. At least I didn’t meet Maggie Mae.