After seeing Catherine’s Palace we had lunch and were taken to see the fountains. There are 144 fountains and they are fed from a reservoir about 4 kilometers (2.5 miles), and none of the water is pumped because it is all gravity fed. 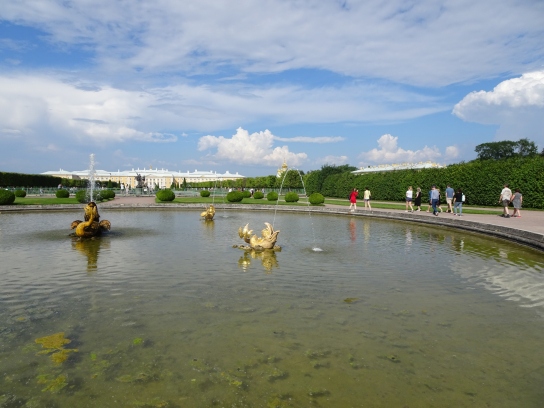 We approached the palace from the landward side rather than the seaward. We did not enter the palace itself. 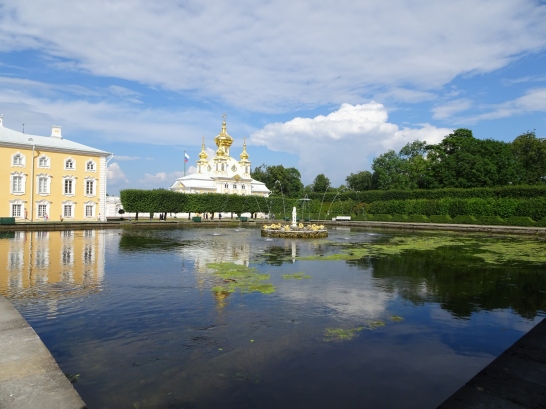 The white building is the church of The Grand Palace.

Where ever you looked there were fountains.

We moved round to the front of the palace only to see more and more fountains. 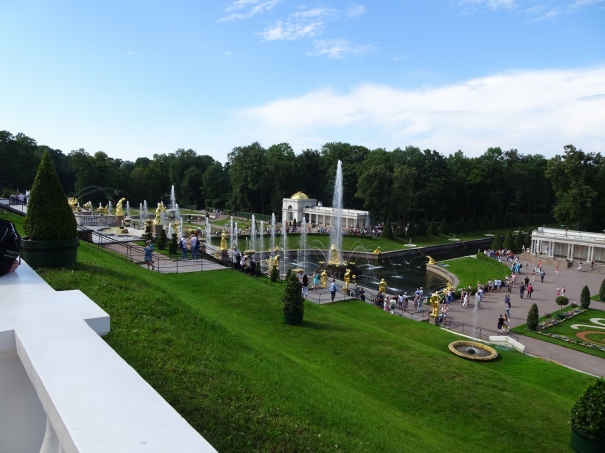 I’d read about the fountains and I’d been told of them, but when you see them in ‘real life’ it is something else considering their age and the sophistication of funneling the water to each of the 144 fountains in operation. 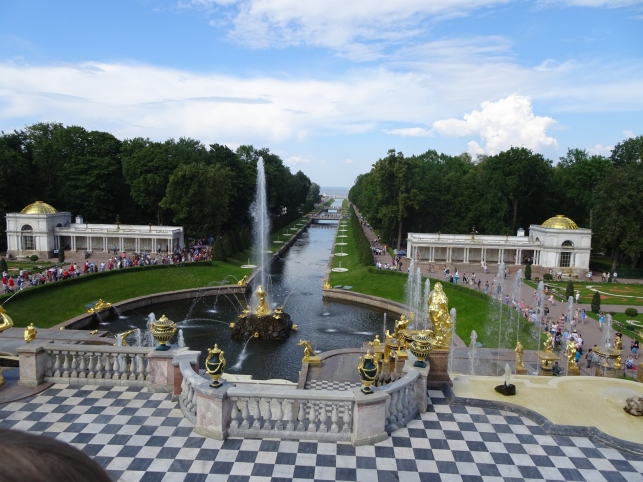 The Sea Canal, which is open to the sea – you can visit the Palace area via boat from St Petersburg. To get to the Palace one would walk alongside the canal bank.

You could have your photograph taken with people in period dress and the fountains in the background. The crowds around the period dressed attendants were to my left, the above picture is just to give you an idea what would be in your picture other than yourself. 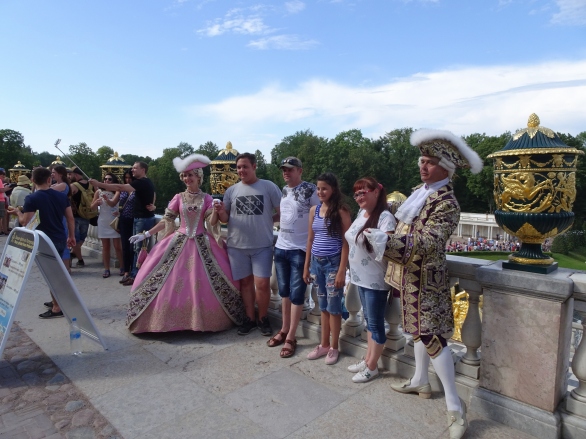 I can’t remember how much they charged. 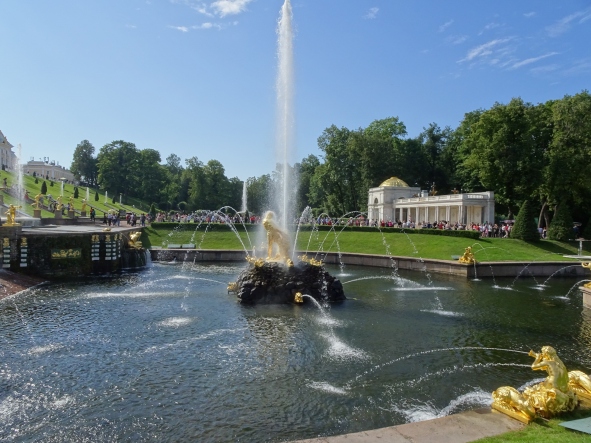 In the centre, on the rock, is a Biblical statue from the Old Testament – Samson and the Lion – it also represented Russia’s defeat of the Swedes.

A closer picture of Samson killing the lion and the water pours forth.

In 1734 the Russians decided to commemorate the 25th anniversary of the Battle of Poltava. Once again it was a symbol of Russia defeating the Swedes, and they chose Samson as the hero, and of course the Swedes were the lion.
A special pipeline was built to carry the water because the Russians wished to maximise the height of the water. They created wooden pipes to carry the water the four kilometers from the water supply. It was completed in 1736 and the water shot up to a height of 20 mtrs (66 feet).
During WW2 the statue was looted by the German army, but the statue was recreated by the Russians in 1947. 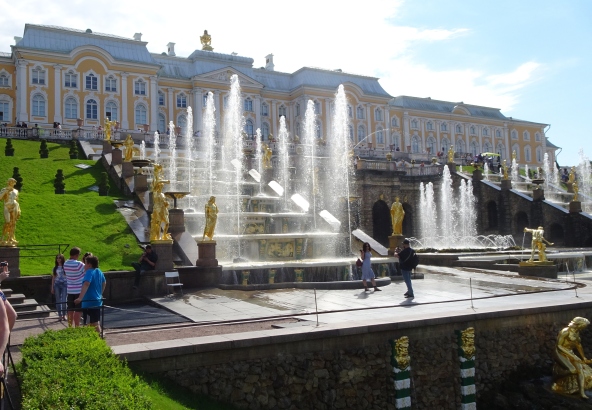 In the centre of The Grand Cascade is a grotto, which contains a small museum of the fountain’s history.
There is an exhibit of a bowl of fruit (it’s not real fruit), which is a copy of a bowl of fruit on a table built under Peter the Great’s directions. The table is booby-trapped with jets of water that soak visitors if they reach for the fruit. I’m told that the grotto is linked to the Palace by a hidden corridor, which is so well hidden I didn’t see it . . . .

Here’s the sad part with a sliver lining.

The Grand Cascade of the fountain, and the Palace behind, at the end of WW2.
Picture taken from the internet. You can see the grotto openings.
The Russians have done a marvelous job of reconstruction.

Everyone was photographing everything – a perfect day thanks to the weather. 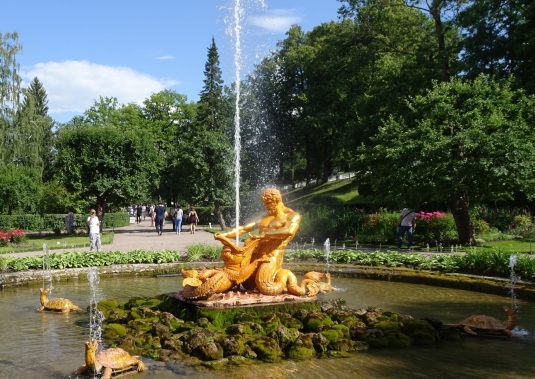 The Sea monster attacks Triton, the messenger of the sea and the son of Poseidon, but Triton’s powerful hands pulls the sea monster’s jaw open, and we have an eight meter (26 feet) water jet gushing out. The turtles crawl away in terror from the fighting enemies. Water jets spurt from their mouths.

Triton represent the young Russian navy that defeated the Swedish navy  in 1714. The Swedish fleet is the sea monster and the four turtles the allies that supported Sweden.

Chess Hill or Dragon Hill as the water flows down. Funny, but this cascade reminded me of the cascade at Chatsworth House in the UK, which was completed in 1703. 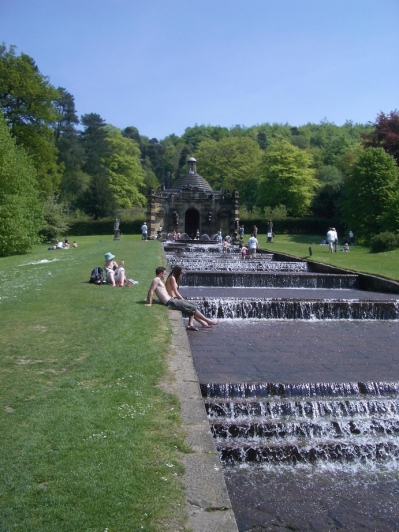 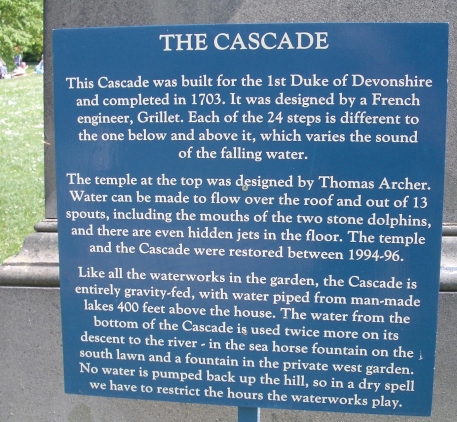 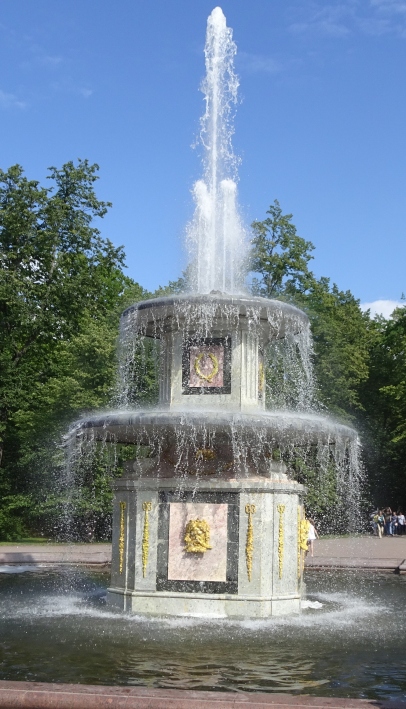 I think this is called the Roman Fountain, but I’m not sure. 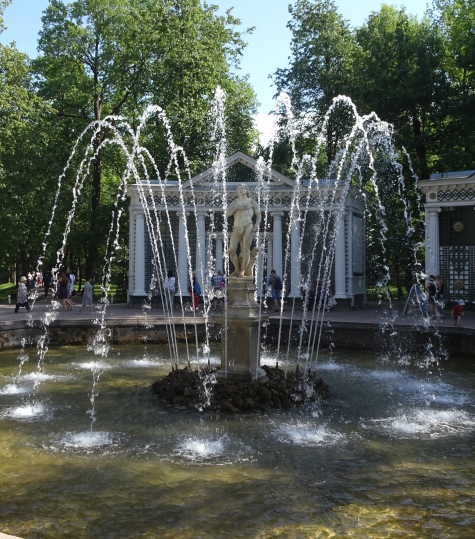 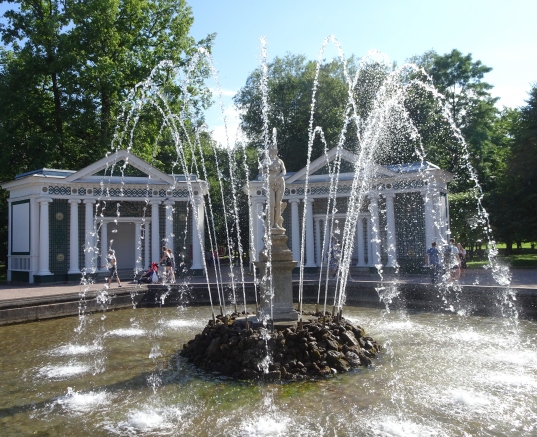 Both located on Marly Avenue, which is equidistant from  the Sea Canal. The water from the fountain does not get sprayed, but jets up, and upon reaching seven meters splits in to large drops and falls back to earth. These two fountains were never defaced or stolen so they are the originals created in the early 1700’s

Sea Canal as we walked over a bridge toward the park and our transport. The Palace and The Great Cascade can be seen. 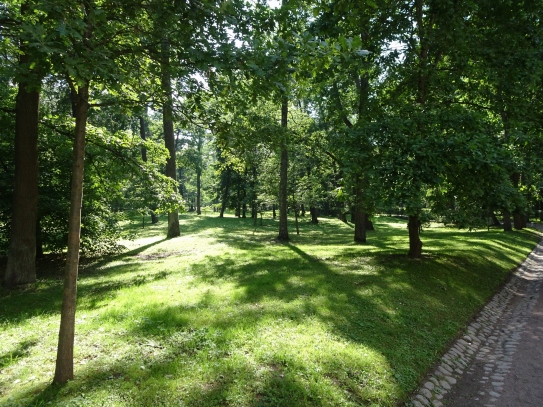 We’d met our guide at 8.30 am, visited various places of interest along the Niva River, and walked around Catherine’s Palace – all before lunch.
A short break for lunch and we started walking again around the fountains. It was a hot day, and a full day, and now we had a thirty minute walk through the park to our transport.
I must admit that I was very pleased to see the bus, and climb aboard into a cool air-conditioned environment. We had a forty five to sixty minute drive back to the ship.
We arrived at 6.30 pm, educated up to my eyes balls in history, admired the fountains and felt jealous of the children running in and out of the water spray on such a warm day, but overall it was a great day, and well worth the money – which we had yet to pay on the morrow, befor our second full day of touring.

After we’d hit the freeway / motorway, it didn’t take all that long before we saw the ship. You can see the freeway built over the water – I took the picture from the rescue centre at the stern of the ship – aka The Sunset Bar.