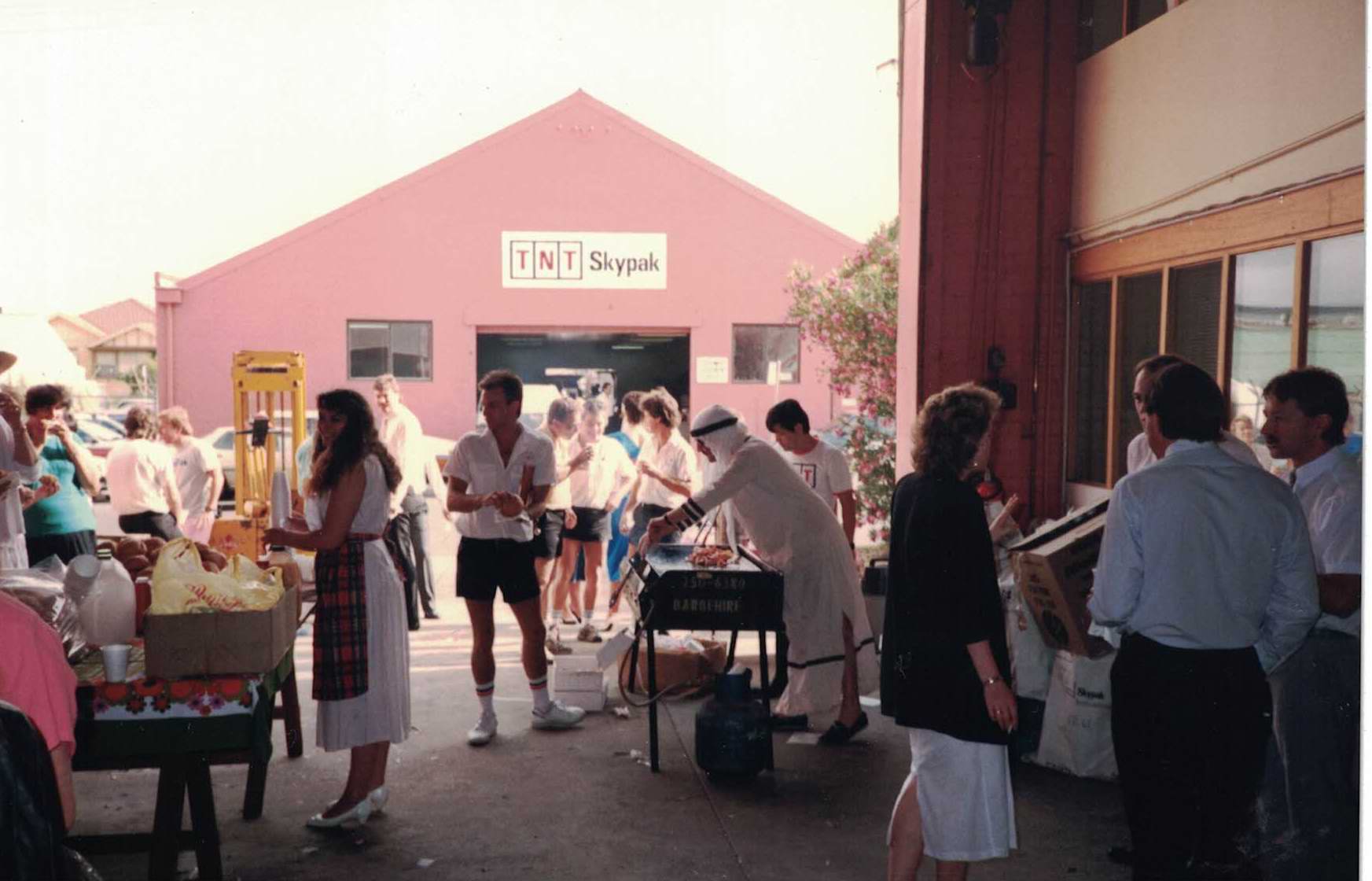 The photograph was taken from within the Sydney building that I worked in the mid 1980’s.
On this particular day we were having a lunchtime BBQ, partly to farewell the person in the Arab costume, (he is at the BBQ), he was being transferred to the Middle East.

Between the building in which I worked, and the other building that can be seen was a public road – we were expanding fast. 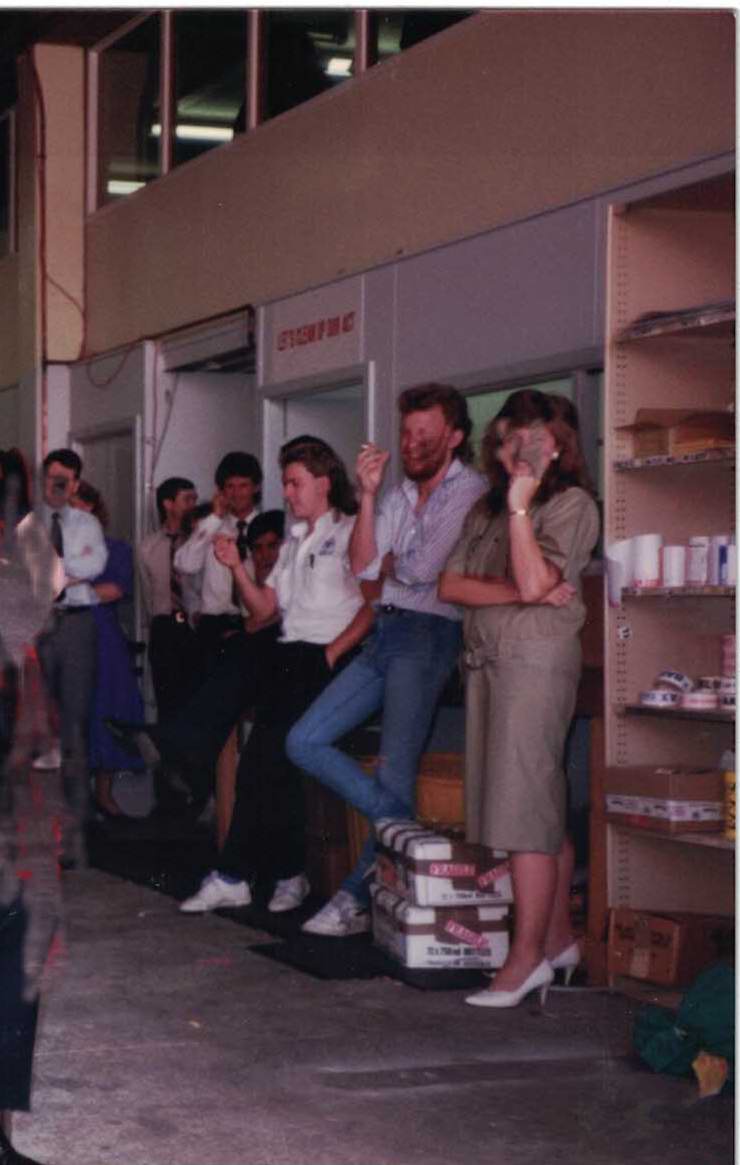 The windows above the staff are part of the mezzanine floor, and this is where I worked. I was not responsible for the daily running of the Sydney operation, but I liked to watch the processing of the consignments. When the above was taken it was a presentation for a sales person’s birthday.

I had been working in Sydney for some months and had settled into my new position and was enjoying the whole experience and regional responsibility.

I think it was a Thursday, which was pay day, that it happened. I was stretching my legs as I walked the length of the mezzanine floor and stopped in front of my desk.
I glanced down as the pay van was about to leave after handing over the staff wages to the paymaster. At that time, the nonmanagerial staff were paid in cash and the paymasters office was on the ground floor. All appeared in order, so I sat down at my desk. As soon as I sat down the robbery began.

To get everyone’s attention the robber fired a revolver, and the bullet went through the glass window in front of my desk, over my head and hit the air-conditioning pipes. The bullet drilled a hole through the glass window, which did not shatter.
The bullet bounced off the solid pipe and landed on my desk!
A few seconds earlier when I was looking down on to the operations floor the bullet would have hit me in the head.

Nobody was hurt during the robbery and the bandits escaped with the staff wages.
The police arrived and took statements from everyone in the vicinity, including myself as the police removed the spent bullet.
Some week later six or eight of us (I cannot remember the exact number) were required to attend court and testify against the accused – the police had caught the gunman and his accomplice. Of course, we made the newspapers, but the Company had already switched paying the staff via the banking system.  Paying in cash was a hangover from the origin of the Company when things were a lot smaller and easier to control.

Sometime later I was asked to be in an advert for selling international newspapers – grey hair turning white opens a few doors. 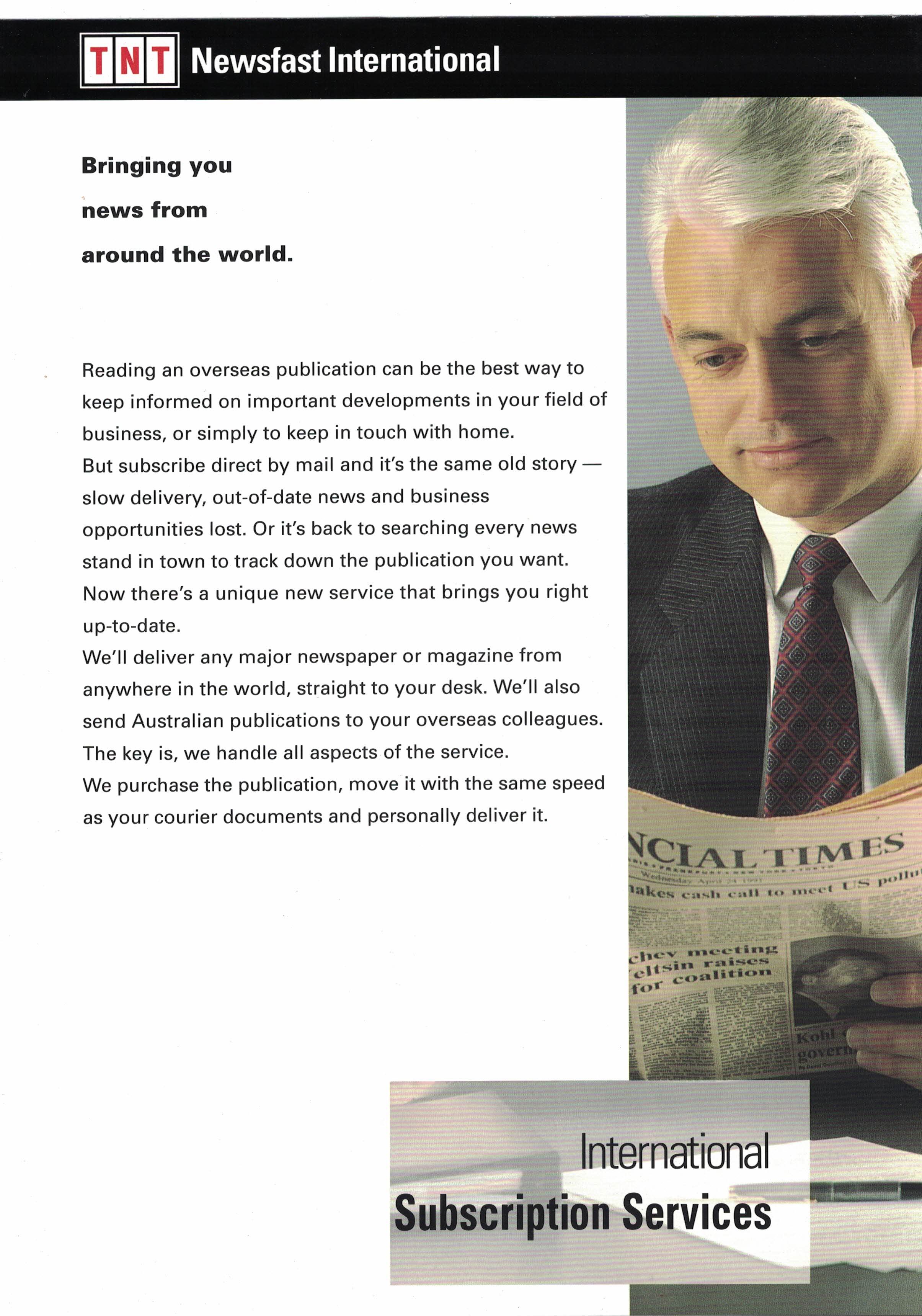 I do not know how many newspapers they sold using the above advert, in any . .

Above is the reverse side of the advert explaining the details of Newsfast, basically whatever newspaper that you wished to receive Newsfast could supply.

This trip in to advertising caused a small demand. . . only from TNT Skypak of course . . . . 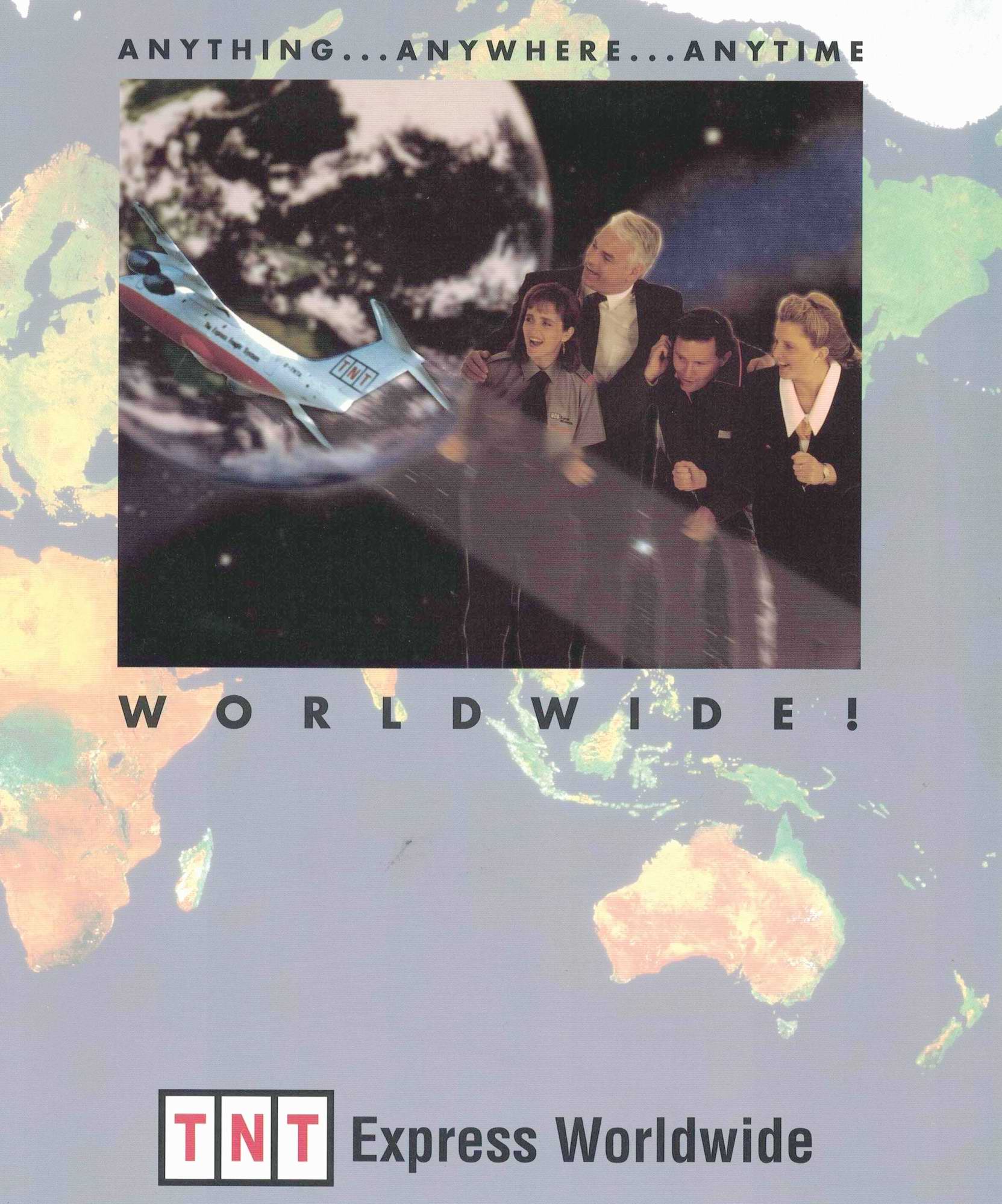 Later the Company decided that they wanted a TV/cinema advert to illustrate transporting documents, via OBC, (On board courier) from London to Sydney.

There was a script of sorts, but the pleasant thing was that the Company had hired a professional film crew and we were out on the harbour in a large private ‘cruiser’, something like the one below, but not this one as it was about thirty years ago.

There were four Company staff members, including myself and the film crew. I was to play the General Manager of the Sydney company, the Company’s financial controller played the finance man, and we had one of the female staff to play the secretary, but I cannot remember the fourth person’s position.
None of us had done any acting or film work in the past so to get us relaxed at 9.30 am the film ‘director’ opened a bottle of Champaign, and after a couple of glasses we were all relaxed!
We cruised around the harbour bridge area zig zagging in and out of the bridge’s shadow depending on the shot and the position of the sun.

As the General Manager I was obliged to use the latest piece of executive equipment to show how important I was – a mobile phone like the one shown above. How things have changed.

A few weeks later we had the ‘Premier’ of the advert, which obviously concentrated on how TNT Skypak could satisfy the London client’s requirements.
With shots of the Sydney courier driving to the client’s office and the ‘Manager’ (me) asking for more speed of our cruiser (shots of the harbour bridge) as I had just received a telephone call (see above picture) that the urgent document had arrived early . . . also in the advert were shots of planes, and the processing system within the Company’s Sydney premises.

The four new acting sensations were just a flash in the pan, but the Champaign was very welcome.

I have never seen the advert since that ‘Premier’ showing, nor could I find it on the Internet. Perhaps it has been censored for being too corny.

A Shot In The Dark