During our visit to Hanoi we’d booked to visit Halong Bay for an overnight sail. The drive was about three and a half hours. It was an interesting trip, particularly watching the motorbike drivers taking live pigs to market on the back of their bikes. The pigs didn’t seem distressed, perhaps they were used to days out on the back of a bike!

We would only be away from Hanoi for one night and the standard practice for hotel guests to Halong Bay is for the hotel to lock the guest’s suitcases in a secure area. We only carried an overnight bag. On our return, the hotel allocated the same room as we had at the beginning of our Hanoi visit.

On arrival in Halong Bay we looked for our ‘Junk’, but which on was ours. . . . there seemed to be dozens all clamouring for jetty space. The picture below doesn’t give the full ‘picture’ if you will excuse the pun. We were told that there are 500 junks operating in the bay. . .

Eventually we found ‘Halong Green’ which was our junk – the above picture.
The junk had six en-suit cabins, but as we were a party of four couples, the whole junk had been allocated to us. The cabin size was OK for the one night. The cabin was air-conditioned, had a double bed, plus they also had small fans. We found the temperature to be cool enough not to require the air-conditioning, but warm enough to sleep with just the fans. The en-suite consisted of a toilet, shower and washbasin. Towels etc were supplied.
As soon as we boarded, we sailed. Because of the number of junks involved it was like a small armada when a number sailed around the same time. I wondered if we would be in a race, but all the junks just sailed slowly through the still waters of the Bay. 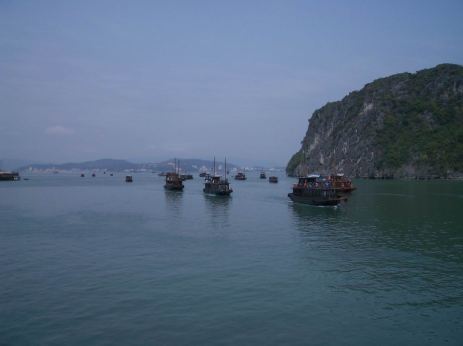 Later our junk rigged the sail, but at the beginning we used the engine.

On the top deck they had sun lounges, which was a little optimistic considering the weather, but we still used them as we sailed past the islands of the bay – we were well wrapped up.

Next deck down from the viewing area was the ‘public’ area – which consisted of a small bar, dining room and lounge area. 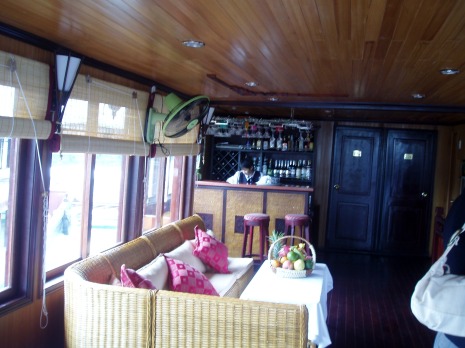 All meals were included in the rate and an honour system allowed one to help ones self from the fridge for soft drinks and beer. Wine was also available, and it was chilled correctly!
As soon as we boarded and dropped our overnight bags in our cabins, lunch was served. Three course lunch while we floated past beautiful scenery, with small islands everywhere. In the afternoon we reached an island of grottos called Hang Sung Sot. We disembarked and climbed the stairs to enter the grotto, along with a number of other people from other junks. 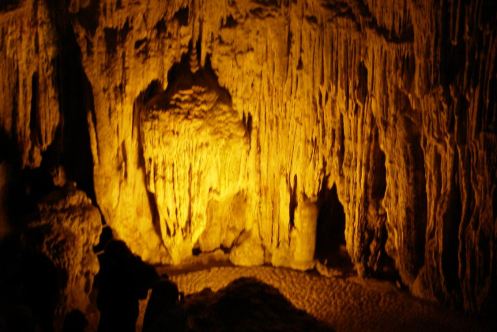 You can see how large the caves are as the visitors walk along the man made paths. 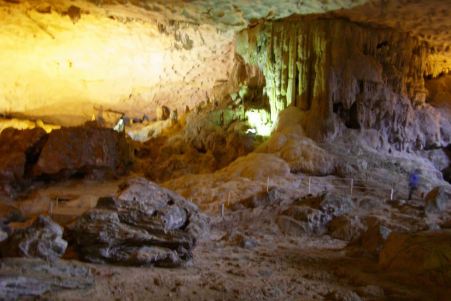 You can just see the fence posts to designate the path way.

Later we stopped at Tip Top Beach on Tip Top island, which gave a panoramic view of Halong Bay as long as you didn’t mind climbing the 500 steps to the top.

Back on board to watch the sunset from the top deck as we cruised in to a secluded bay where we met other junks, all lit up for the night. I had a feeling that they ‘circle the wagons’ just in case anything goes wrong during the night – pirates perhaps?

Then it was dinnertime.

The birds and flowers were carved in the afternoon from vegetables, while we were sightseeing. The chef used cucumbers, large white radish, carrots and melon. The swans were made from the radish plant – note the rose carved in to the melon.

After breakfast we climbed in to a sampan to be rowed in to an old volcano. The entrance was through a hole in the side of the volcano – and for some reason as soon as you passed in to the flooded volcano everyone, without exception, only spoke in whispers. 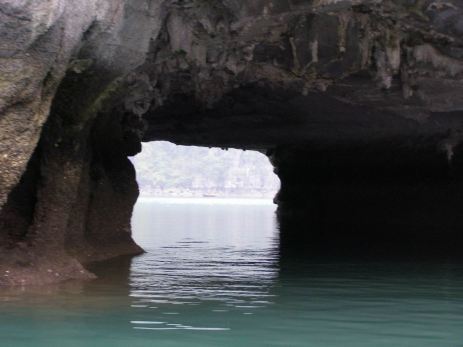 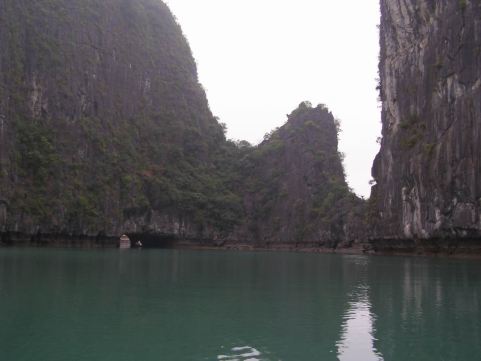 Once inside the volcano we where not asked to lower our voices, but it was just something about the place that demanded silence. It was a beautiful feeling of absolute quiet except for the occasional bird call. We just floated, even the oarsman at the stern stopped rowing so as to experience such tranquility. 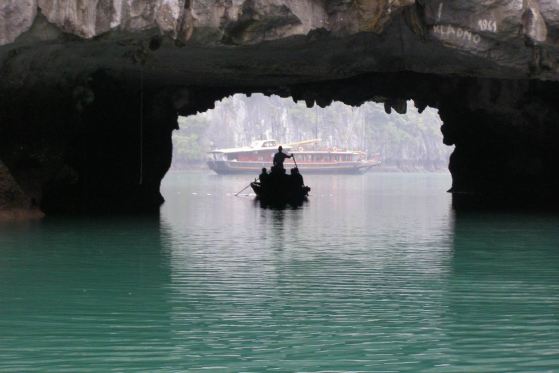 As we started our return others where still arriving – I don’t think the junk in the background is ours.
As we left the volcano area a sea mist drifted in and began to gather all around.
Many of the island now appeared as shadows. Some of the islands had special names due to their shape – Indian Chief – the island on the left. 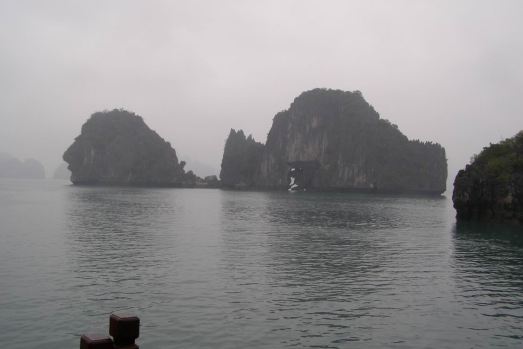 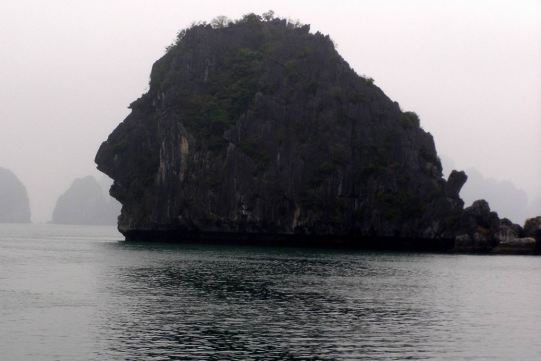 We were served an early lunch as we were now on our way back to the wharf and civilisation.

Followed by a three and a half hour drive back to Hanoi.