During the night of the cruise from the Bay of Islands to Tauranga I was woken around 2.00 am to the sound of the ship’s foghorn, which was set to sound every two minutes.
In the ‘old days’ of the 1960’s  when sailing in a cargo ship the officer of the watch would haul on a piece of rope when ever he thought he should, unless the ship was close to land or the captain was on the bridge.
The regular sound brought back memories of yesteryear.
https://silverfox175.com/2016/01/03/judy-judy-judy
The above link will take you to a foggy experience that I had in Hong Kong.

As we closed on Tauranga the fog became thinner and the foghorn was stopped. The above photograph shows the thinning as we approached our berth. 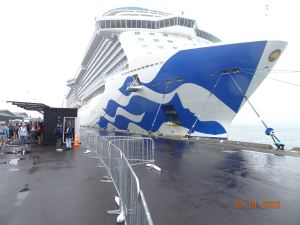 It rained as we moved alongside, but fortunately it stopped as we disembarked.

Our daughter-in-law parents live in Tauranga, and they were kind enough to show us around. The area where we berthed was Mount Maunganui and a walk along the main street reminded me of certain seaside towns in Australia. 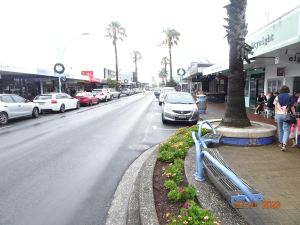 It is a very popular a beach suburb with great beaches for surfing along Marine Parade.

We sailed from Tauranga later afternoon for the South Pacific Ocean and and a night of cruising before entering Auckland harbour. As usual the evening meal took precedence over gazing across the evening ocean.

We slid quietly into Auckland and moored next to the Hilton Hotel. On stepping onto our balcony, I received quite a surprise.

At first I thought the building was part of the port authority building until I noticed the name of Hilton, which is not too clear on the photograph taken from the balcony. 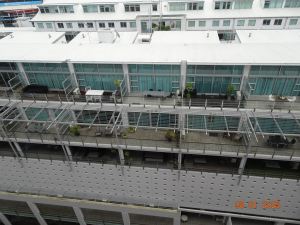 The view directly from our balcony as we overlooked the private balconies of the Princess Wharf Apartments. 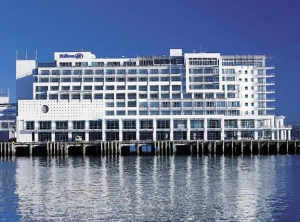 The Hilton Hotel from the water – picture from the Hilton web site.

We also had company of the port side of the Majestic Princess – the Silver Whisper, which is a Silversea Cruise ship.

A better picture than mine – Silver Whisper alongside in Sydney, unfortunately I cannot afford to sail in a Silversea vessel. 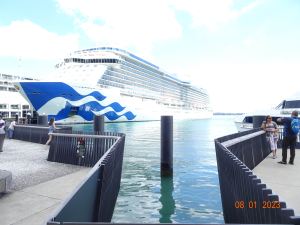 It was a short walk from Majestic Princess to Quay Street.

During our last visit to Auckland we had experienced the Hop on Hop off bus, so this time, we thought a DIY stroll around the shopping centre.

The streets were quiet, but the ‘feel’ of the area was very positive. 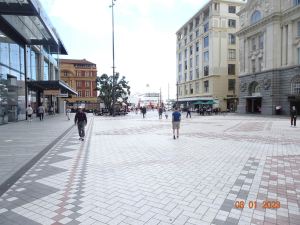 The buildings were a mix of old and new, the ship that can be seen is the Silver Whisper.

Even though it was Sunday many of the shops were open, so passengers off the ship were able to buy what they required.
We bought some small items, and we did not have a problem using my credit card for low-cost items, much easier than changing Australian cash for New Zealand cash. 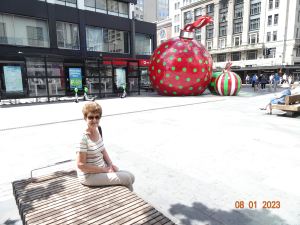 The weather was very kind to us after the two previous ports of call and it was a pleasure to walk around without an umbrella or a raincoat ‘just in case’. 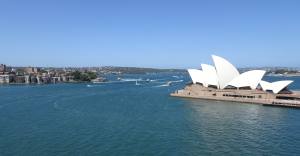 The photographs in this blog were taken by me as we prepared to sail. 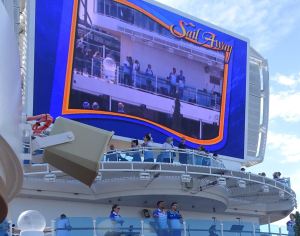 The large TV screen on the main pool deck was highlighted with the words ‘Sail Away’ – music from the ship’s band and dancers to get the passengers in the mood.

The ship’s dancers to encourage the passengers to join in the dance – perhaps if I was sixty years younger, I might have joined in . . .

While all the music and dancing took place on board the ship left her Sydney berth at Circular Quay and set sail for New Zealand. The weather was perfect.

We had a pilot onboard while transiting Sydney Harbour and as we reached the harbour entrance at South Head (see photo above) I watched a pilot boat manoeuvre alongside to collect the pilot.

Once the pilot had left us it was full ahead for New Zealand.

It was a two-day cruise from Sydney to the area of the North Island of New Zealand known as the Bay of Islands, which was our first port of call. 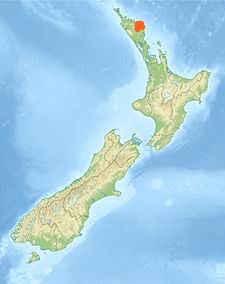 Auckland is south of the area indicated.

As we approached the Bay of Islands, I went on to our balcony to take a photograph of our approach –

It was heavy sea mist and visibility was limited. Later the mist cleared and the rain began – it poured!

Maureen & I had plans to go ashore and visit Paihia and take the ferry across to Russell.
From the ship to the small town of Paihia was a 25-minute trip in one of the ship’s tenders (see the orange boat above in the rain) and even though the passenger area was covered it would not have been a pleasant trip. We decided to stay on board  . . .the previous time we visited the Bay of Islands it was beautiful weather and we used a ship’s excursions to see the highlights of the area, which included where the signing of the Waitangi Treaty took place in 1840.

In the afternoon the rain began to ease by which time it had become too late to go ashore. The above shows the weather conditions towards Paihia – not very encouraging.

I watched the above sailing vessel braving the weather as Maureen & I considered a visit to the Vines Bar – which became our favourite.

Our next stop was to be Tauranga 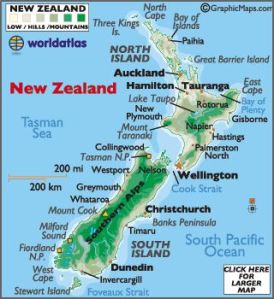 The above map shows the Bay of Islands (near the top of the map) and the location of Auckland (which we will visit after Tauranga) – it is about two-and-a-half-hour drive from Tauranga to Auckland.
We sailed from Tauranga for an overnight cruise into the South Pacific before arriving in Auckland early the next morning.