Our four nights in Barcelona just flew past, and on the final morning we were once again making our way to the railway station for the rail trip to Madrid. Once more we paid a little more for the extra room, but this time we were unable to book the four seats around a table, even though I had booked several months in advance. The trip, at three hours and twenty minutes, was smooth and comfortable. We reached speeds of 300 km per hour on some of the stretches, but one never had the feeling of rushing past the scenery in a blur.
On exiting the station area, we were met by our driver. I’d booked a chauffeur driven car to meet us in Madrid, and at the end of our stay, take us from our apartment to Madrid airport. I did this because I wanted reliability on our departure day. The trip to our apartment was about thirty minutes. 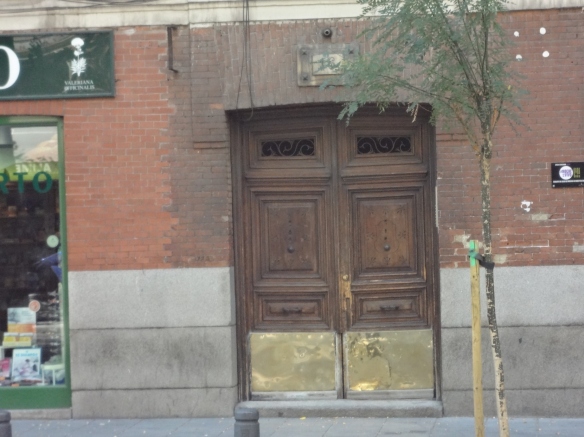 When I saw these doors, I had thoughts of Paris all over again.

At the beginning of the holiday we tossed a coin to see who had first choice of the rooms – we won in Paris, so our friends had their choice in Barcelona, and we had Madrid, and they would have Lisbon.
The apartment was on the second floor and the building had a ‘cage’ type continental lift that worked well. 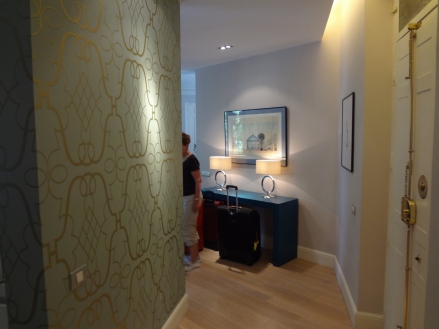 The entrance area of our apartment. The main door on the right of the picture had coded locks.

On our departure we would be flying this time, rather than travelling by train. Although the chauffeur driven car was more expensive it accommodated four passengers and our entire luggage with ease. The trip to the airport would be during the morning rush hour, and we might have required two taxis, due to our luggage, and the thirty-minute trip could have been stressful and uncomfortable. I booked the transport through Spain Select, (www.spain-select.com/en) the company that handled the renting of the Madrid apartment. They were very efficient and easy to deal with over the Internet. Our greeter, Alex, met us at the apartment and explained everything in detail. A very nice touch was the welcome gift of individual small packets of tea, coffee, milk, savoury biscuits etc. To top it all, the apartment had a big ‘Wow’ factor particularly after seeing the old wooden door that led from the apartment block to the street.

Then we walked in to our apartment – it was beautiful!

I took the picture from the laundry door past the kitchen bench to the dining area.

The above picture was taken from the agent’s web site.

The kitchen had everything you could possibly want, from a microwave, specialty oven, to a sink disposal units for waste food. Everywhere was spotlessly clean and all of the appliances were hidden in the walls – a gentle touch and a hidden cupboard door would open. We couldn’t have asked for anything more.

Hallway from the kitchen area to our bedroom. The first door on the right was the third bedroom. 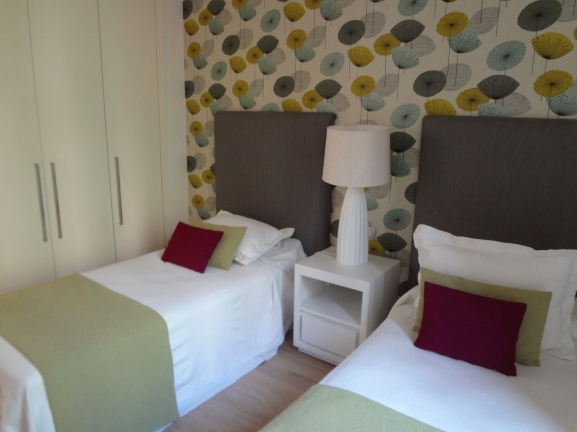 Further along the hall you san see an indent that is our friend’s bedroom. 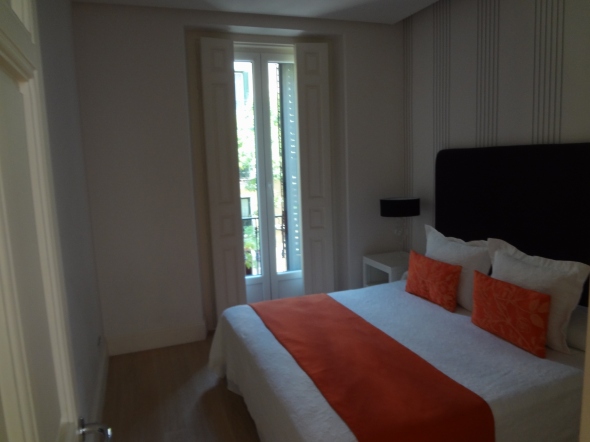 His and hers sinks in our friend’s bathroom. 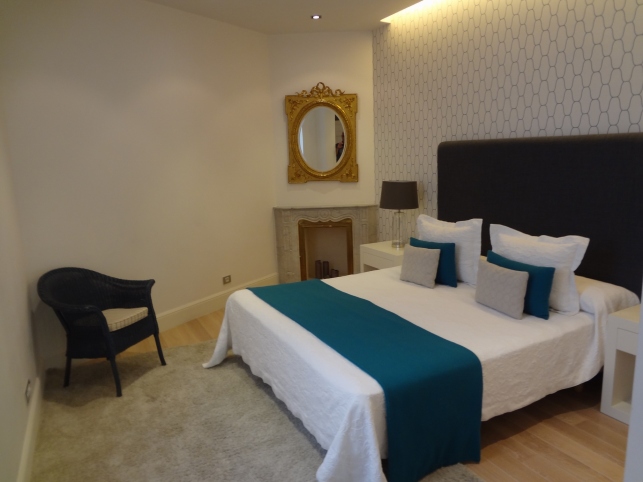 We had his & hers storage areas.

As well as his & hers sinks in our en-suit. The chair that can be seen is in our bedroom. 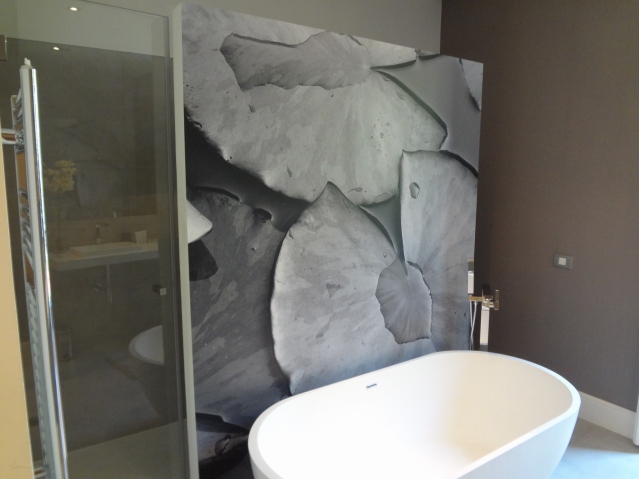 Fancy a bath – the shower is a stand alone shower on the left.

Taken from our small balcony. 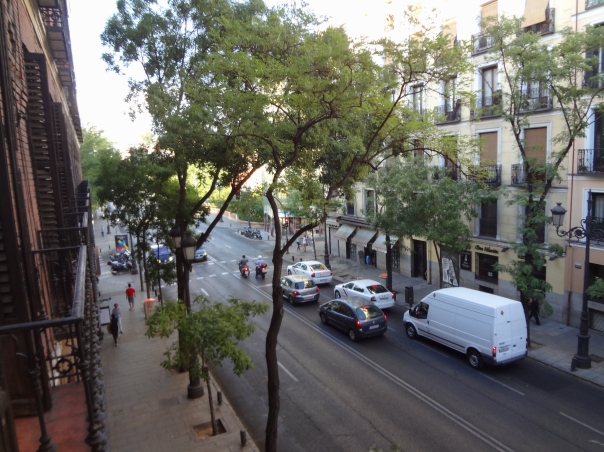 Our Madrid location was about five or six minute walk to the Royal Palace. 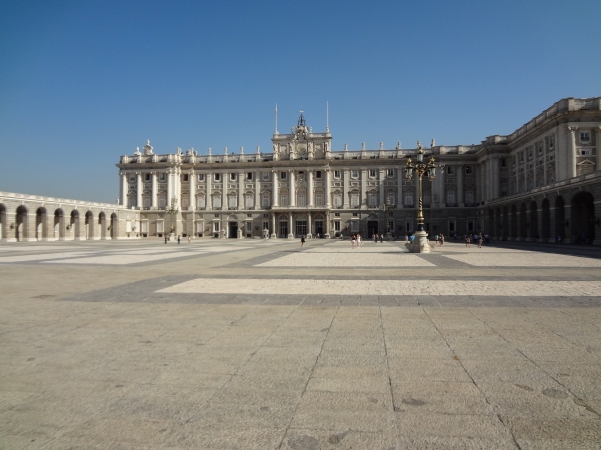 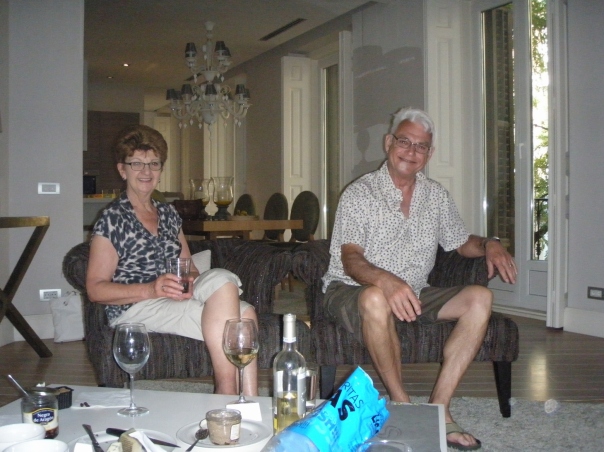 Happy hour – local wines, pâté, cheeses, and bread or crackers along with good company, what more could we want?
In our opinion the city of Madrid is less vibrant, but with a more historical culture than Barcelona. The free tapas with a beer or wine were noticeable, because in Barcelona all the tapas that we had with our drinks, were charged to the final bill.

Madrid tapas were a good size. 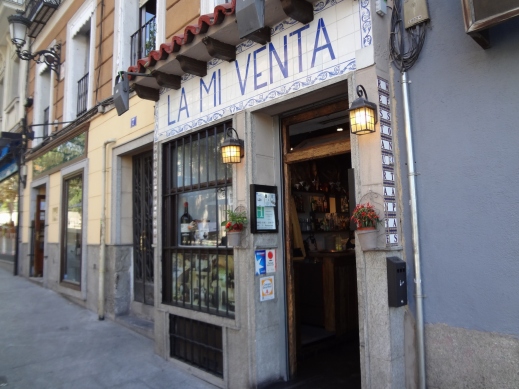 Every time we ordered a drink we had tapas. We sat outside under a sun shade and watched the world pass us by.

Inside the La Mi Venia

Bar across the road from our accommodation – just right for a night cap.

Just one small disappointment while in Madrid, and a warning to my ‘older readers’.
We booked a hop on hop off bus trip through a local travel agent, which was located not far from the apartment. It cost us Eu 25.00 each, about $39 AUD.
On boarding the bus, we were given route maps, which included various pieces of information. Reading the information I noticed that for those of us over 65 were entitled to a discounted rate of Eu 13! ($18.50) I asked at the information centre when we left the bus if I had understood the information correctly and was told that we should go back to the travel agent and ask them for a Eu 12.00 refund.
Of course, when we did return to the agent they were closed for siesta and due to our other commitments we never did have the time to challenge the travel agent. There is no way that I would be considered under 65 (my age at the time was 70), so I would expect a competent travel agent to offer the discount without being asked. The youngest of my group was sixty-seven, so the agent failed in her job and her customers felt cheated.
I wrote about this on Trip Advisor and the travel agent responded blaming us for not asking for the discount, as if we, as foreigners should have known. Fortunately, this experience did not spoil our enjoyment of our few days in Madrid.

On our departure day we opened the street door a couple of minutes before our departure time, to find our transport waiting for us. The ride to the airport, during rush hour, took us thirty five minutes, even though the driver diverted a few times to avoid traffic jams. I do love efficiency, and reliability.
Check-in education started as we entered the airport building. We checked the departure board for our Iberia flight (the national airline of Spain) for our check-in counter and made our way to the correct area. On arrival we found it all to be self-service.

I placed my passport in a reader and it pulled up our booking. On completion of the check-in the computer required the number of bags that we were lodging. I input four, and the machine started to print our boarding cards followed by four self-sticky luggage labels. The machine then started a short video on how to strip the backing from the labels and to attach them to the bags, along with instructions to remove the sticky receipt label.
We then dragged our bags to a lodgment counter where a ‘real’ person accepted our boarding passes; asked us to load the bags on to a conveyor belt, and then pushed a button to activate the belt.
The whole episode made me wonder how far the self-service aspect of flying would be taken – perhaps the next step is to use a flight simulator before boarding, and the person with the best score gets to fly the aircraft. Those who just fail the flight test might become cabin crew to explain the safety procedure to the rest of us who are too thick to get involved.

The aircraft was an AB320 (not sure of the version) 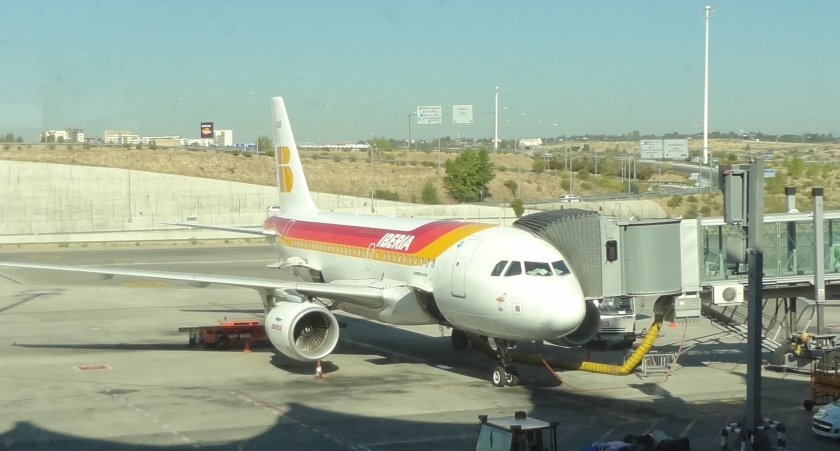 The seats had been packed too tight. I am over six feet in height, so my knees were jammed in to the back of the seat in front. Every time the passenger in front moved I had to stick my legs out in to the aisle so as not to have my kneecaps damaged.
The flight was just over the hour, but it seemed much longer. Our destination was Lisbon, a city famous for its sardines, which are exported worldwide packed in tins. Of course after our flight, we re-christened Iberia to Air ‘Sardinia’.

We had planned to take a night train from Madrid to Lisbon to experience the rail en-suit sleeper service. After I’d investigated the train I realised that the train would arrive in Lisbon station at 7.00 am, and we would not be able to check in to our accommodation until 2.00 pm.
What would we do with all our luggage for seven hours – I suppose we could have found a left luggage office, but as the station is not in the centre of the city we would have to find places of interest in a town that didn’t open until mid to late morning. It all seemed too hard so we decided to fly and have a leisurely breakfast in the Madrid accommodation and leave at a civilised hour of 8.30 am for the airport.

The additional benefit was that the airfare was cheaper than the rail fare!!