On one diversion that had monkeys as cargo we had to remove them from the aircraft to have the hold cleaned and also to feed and water the animals. Unfortunately, one of the monkeys escaped and ran across the warehouse floor to the wall and within a few seconds had scaled the wall and was now sitting on one of the roof beams.

This was a huge problem because we did not have any idea if the animal was healthy or what deceases it could spread amongst British animals and humans.

How to get it down . . . use bananas of course – a monkey will do anything for a banana, or so we thought.

We tried to tempt it down with various fruits in the hope that we could capture the animal.
Ollie, one of my colleagues, was adamant that we should do our best to keep the problem in house before we called in a sharp shooter.

Ollie tried his best to entice the animal down and spent a considerable amount of time placing fruit at strategic places. The animal did come down partway and took some of the fruit, but it was always just out of reach of being captured.

Ollie was very concerned and kept telling me that it was only a matter of time before the animal would trust him . . .

Finally Ollie did get close to the monkey, which emptied its bowels and threw some of the contents at Ollie and hit him in the head – Ollie was upset to say the least, so he rang the police for a sharpshooter muttering about the ingratitude of monkeys.

The monkey was shot with a tranquilliser dart from memory, rather than a bullet.

Found the picture on the internet of a tranquilised monkey.

I’ve called my colleague Ollie, which was not his name, I haven’t seen him for over forty years, but I do not wish to cause him any embarrassment if he sees this post. 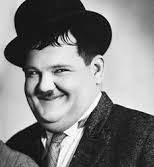 I named him Ollie, because he reminded me of another Ollie, not in looks, but in ‘off set ability’.

One night Ollie and I were on nights together (there were two of us because a freighter was due from New York), I was working on the load plan for the final leg of the flight to London and I’d left Ollie to listen on the radio.

Around 3.00 am the aircraft was still over the Atlantic, and they called us for the local weather to assist them when landing.
Normally we would ring the airport control tower for a full weather report because the aircraft dealt with us rather than the tower.

This night Ollie decided to go outside to see what the weather was like, and then wandered back to the radio.

‘Speed 066 this is Speedbird Manchester, – it’s raining!’ this in a strong Bolton accent

There was silence from the aircraft, until the aircraft replied and asked if we could be a little more explicit!

What they wanted was cloud height, wind strength, and wind direct etc.

After that night I refused to work nights with him ever again.