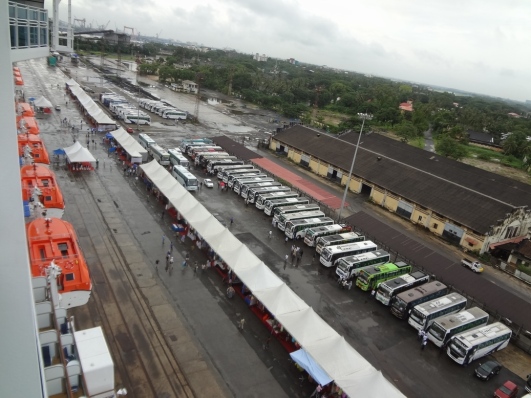 I think that every bus in Cochin (Kochi) had been hired for our arrival. This time we didn’t take a ship’s tour because it is just as easy to DIY.

Two of our friends had decided to join us for a tuk tuk tour of Cochin. Our other two friends where having no end of trouble with immigration, because my other friend’s wife who is Chinese had to be processed differently than the rest of us even though she had an Indian visa issued in New Zealand.

We checked various tuk tuk drivers for their command of English and picked one who had a business card printed in English with a list of the main places to see.

I wanted an English speaking guide so there would not be any misunderstanding about the rate agreed, on our return to the ship.

There isn’t a lot of room in a tuk tuk for two – make sure you are both close friends. 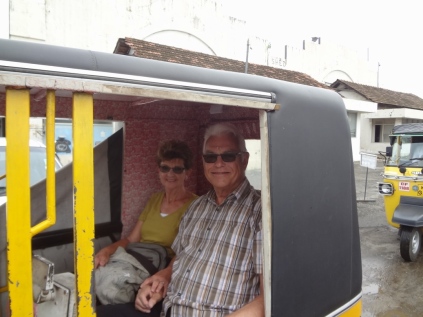 It was monsoon season so I took precautions of carrying a pair of flips flops because I didn’t want my shoes ruined in water.

View from the back seat – these machines will turn on a sixpence. 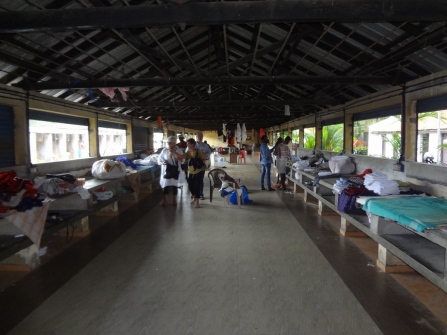 First call was the dhobi wallah – local laundry – one of them had the contract for all the bedding of a local hotel. The above picture is the main area where the ironing takes place.

This man was ironing a shirt – the iron was heated by red hot coals in the base of the iron – the whole ironing ‘item’ weighed eight kilos! (nearly 18 lbs). As we watched it looked as if part of the shirt was going to be marked with a burn but it wasn’t and he handled the heavy unit with great dexterity.
We were told that the weight was 8 kilos so I checked on the empty weight (the iron is called a charcoal iron) and the empty weight is 2.75 kilos, but I doubt that it would hold 5 kilos of burning charcoal so perhaps they meant 8 pounds, regardless it was interesting to see him work.

This man was belting the life out of a piece of clothing – his washing tub was behind him – solid concrete.

All done by hand – washing tub at the back, soap powders, and a constant wet floor. If it is the same as Mumbai (Bombay) then each ‘cubical’ is an individual businessman rather than part of a larger company. 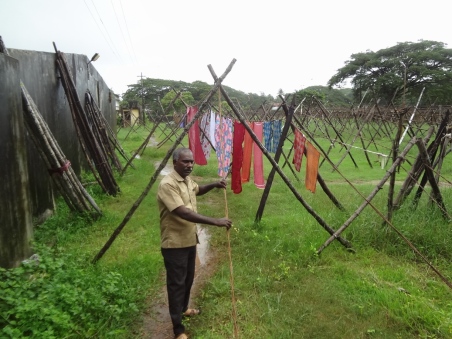 Even in the monsoon season people were optimistic enough to hang washing out. The washing was not held on the line with pegs – the washing line was made from twisted coconut fibre and a couple of lines were platted so that the clothes could be poked through the platted line and strung between the ‘A’ frame poles. 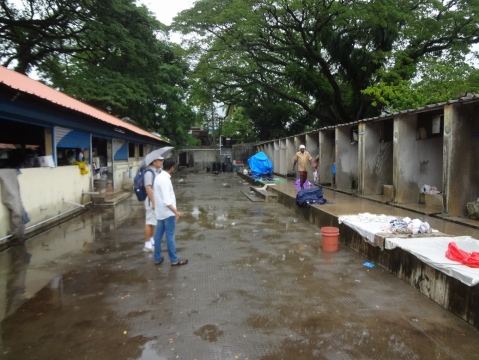 Behind me is the garden where the clotheslines are located, to my left is the ironing room and on the right is the washing area where people in each cubical / section beat the dirt out of clothes – see below – I should have used a flash.

Flip flop time – it is still raining – I changed shoes after which I didn’t care whether my feet got wet or not.

In our tuk tuk Maureen sat on the right & I was on the left. The right hand side had a heavy plastic sheet to keep the passenger dry from rain & spray of the traffic. The left hand side was the entry / exit point for the passengers so it didn’t have a plastic sheet, but our driver used his customer service skills and obtained an umbrella for me to hold open, while he drove, to try and stop the rain coming in to the cab area and wetting his passengers. I was always concerned that when it was up I couldn’t see what was ahead of us, or if I was going to belt a pedestrian or scratch a car / truck. ‘Elf & safety . . . . wots dat? 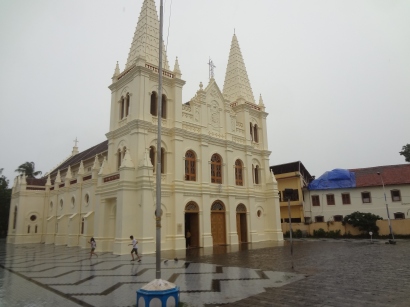 Maureen & I and our friends were not in to sight seeing churches, temples or mosques, but at times a particular place of worship has strong historical link.

It was built by the Portuguese and became a Cathedral in 1558. When the Dutch arrived  they destroyed many catholic churches, but not this one. When the British arrived in 1795 they demolished the old building (the church), because the Dutch had been using it as a store for their arms.
In 1887 a new building was started on the old site and this was consecrated in 1905, and Pope John Paul 11 proclaimed it a Basilica in 1984.

The day we visited I expected to see Noah gathering the animals because the rain was so heavy. 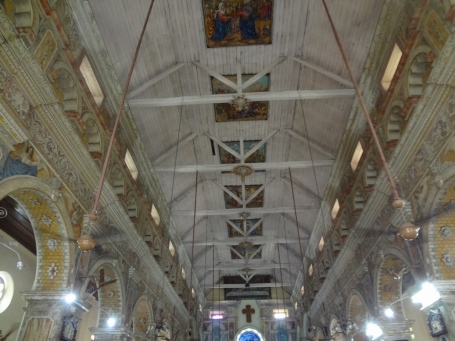 Inside the church – I found the painting in the ceiling interesting, they depict the 12 stations of the cross.

I’d been telling our friends of the Chinese fishing nets, and how unusual there are, but I should have warned them that not everything is as it should be – the above is from an advert. 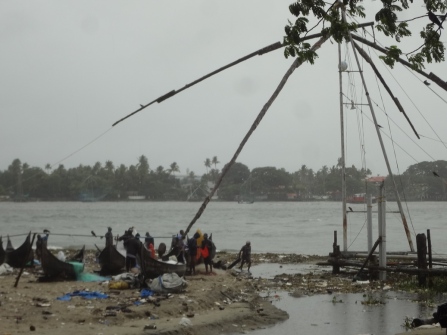 I took the above in heavy rain while trying to keep my umbrella from blowing away. The rubbish on the beach devalued the whole image.

The stalls selling fresh fish were also a disappointment, due to lack of shoppers and the miserable weather. 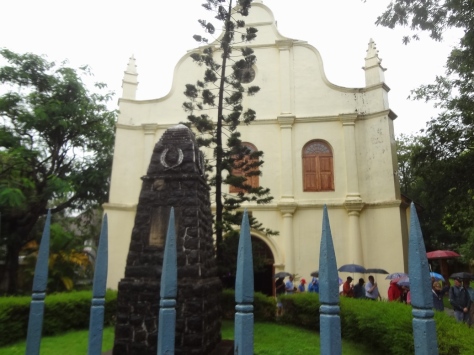 St Francis was the first European church to be built in India, originally of wood and then of stone in about 1516. Being a church for the Portuguese it was catholic, until the Dutch arrived in 1663 when it was reconditioned and converted to a protestant church. It remained a Dutch church even after the British had captured Cochin in 1795. It was given, by the Dutch, to the British Anglican community in 1804.

Vasco de Gama, the famous Portuguese navigator, died in Cochin in 1524 and was laid to rest in this church. Fourteen years later in 1538, his remains were removed to Portugal and he was reburied in Lisbon.

For those interested in researching their family history this church has the Doop Book, which is a record of baptisms and weddings from 1751 to 1804. Many Dutch who are interested in their family history visit the church, because visitors are able to study the Doop Book records. The original book was sent to London in 1932 to be repaired by experts, and rebound in the original way. Due to the importance of the original book the copy available for research is a facsimile.

The Minister or Predikant of the church, Peter Cornelius kept the Doop Book up to date in his own hand writing for forty years.

The Church of South India, which has 22 dioceses across four States of southern India, and Sri Lanka, currently owns the St Francis Church in Cochin (Kochi). The church holds regular services each Sunday, and is open the other six days for tourists and visitors.

Since the arrival in Cochin of the Portuguese the reason the trade began was due to spices, and it hasn’t changed in centuries. 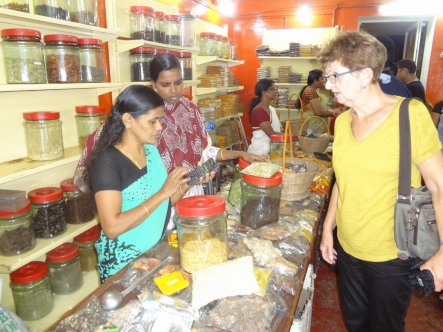 The latest trader was Maureen as she bargained for a bag of cinnamon – it was offered at USD $7, we offered $5 and they were happy. Considering the price in Sydney USD $5 was cheap, but the transport from Cochin to Sydney was free :-o)
Australian quarantine checked the bag and its contents, before returning it to Maureen, and allowing it in to the country.

The smell of the spices was pure magic – I did ask about the small brown seeds that can bee seen, but can not remember the answer.

How about spices in liquid form.

or powder form – your choice. 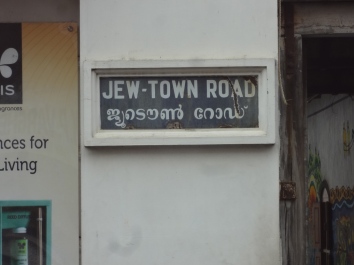 The Jews in the early days had a lot to do with the trading.

Interesting shops from jewellery to clothing to souvenirs and more colours than you can shake a stick at  . . . 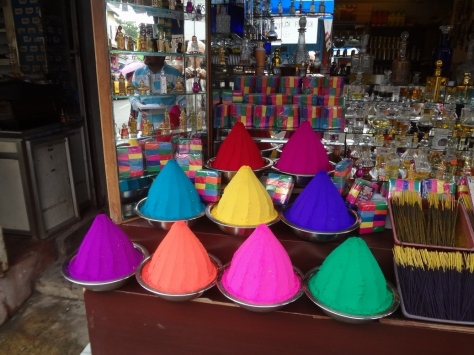 Perhaps for the festival of Holi – which is The Festival of Colours – Lord Krishna is thought to have loved jokes and would drench girls in water and colour.

I obtained the above & below pictures off the net 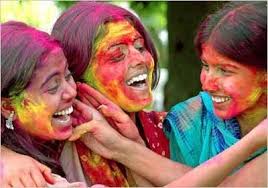 The dhobi wallah must love this ceremony.

We were never too far from spices

Even elephants had to have a doze in the monsoons season.

Back to the ship for a late lunch and a dry wine – the only dry bit of the whole tour.