This was the second part of our ‘back to back’ cruising from Sydney in Diamond Princess.

We spent a day in Yokohama before sailing to cruise the Japanese coast and a single foreign port in South Korea, Busan, which is across from Japan via the southern part of the Sea of Japan. We would stay there for a day, before sailing back to the western coast of Japan, and then to return to Yokohama where we would leave the ship and fly home.

Entering Busan port. Busan used to be called Pusan, but was renamed in 2000. We sailed passed miles of container storage areas, cranes and wharfs, confirming that Busan is Korea’s busiest port, and the ninth busiest in the world. We then sailed under the  Gwangandaegyo or Diamond Bridge, before going alongside. 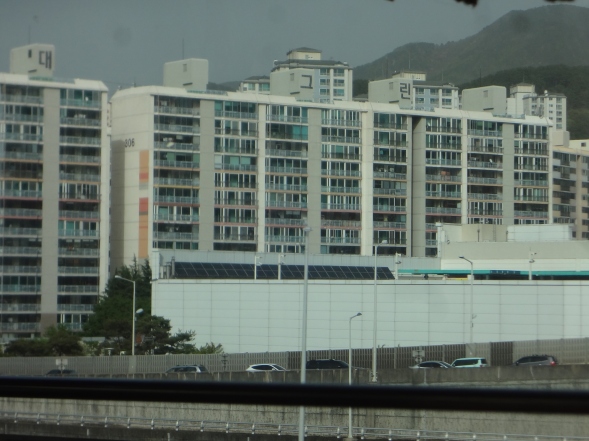 Maureen and I had booked the 100 steps climb to a temple – not being a keen viewers of temples the tour included a visit to a famous fish market, which for us was the main reason for taking the tour.

The one thing that has stuck in my mind of our visit to Busan was the very large number of apartments – block after block, it reminded me of a Lego city that my grandchildren build. I suppose with a population of about 3.6 million and the usable land being hemmed in by two rivers and a range of mountains the only place left was to build upwards. 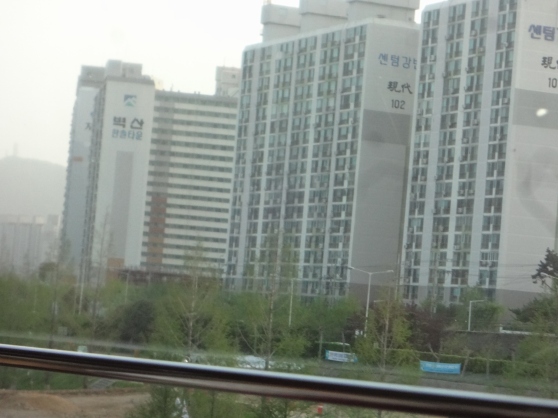 All the city photographs were taken from our coach, some might appear slightly blurred. 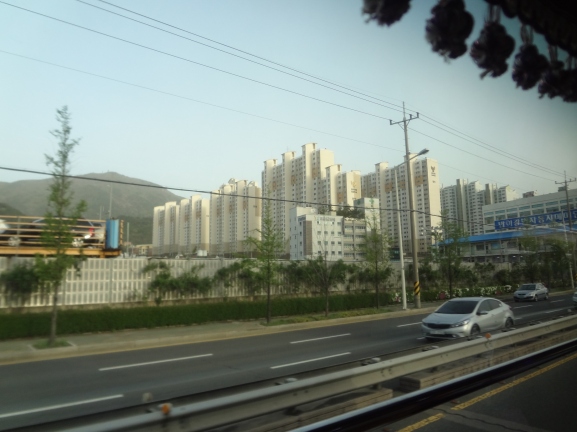 Note that this is block number 108 so they have 107 others just like it, but how many more are in this area? 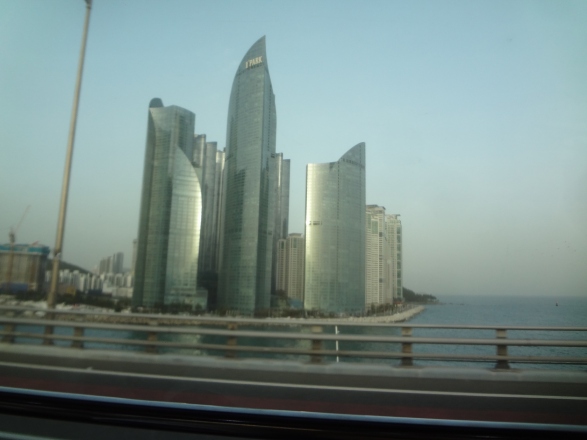 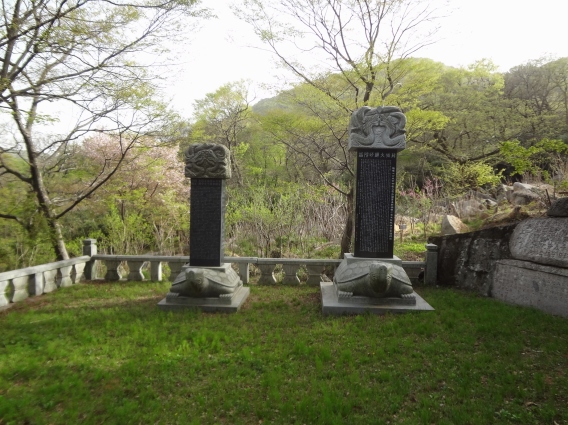 After over an hours dive we left the bus and started the climb, not the hundred steps, just a inclining path, which got steeper. The above is a picture of Monuments to family members of the past. 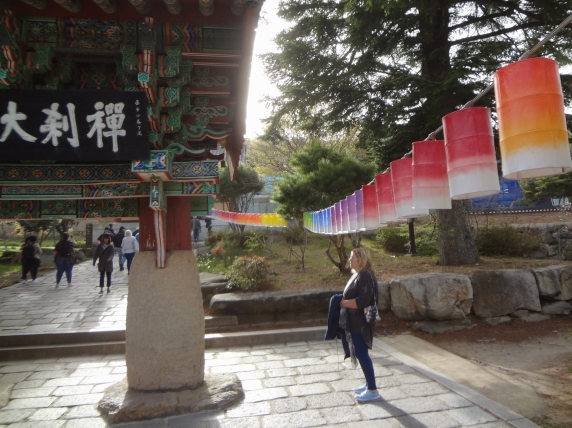 The start of the Beomeosa Temple, which is 1300 years old.
The lanterns are lit at night and I should imagine would add to the overall ambiance of the climb.

As you see we are now at the beginning of the temple area – still haven’t reached the hundred steps.

The Gate of the Four Heavenly Kings is guarded by theses statues – they guard the entrance to heaven. They look like the do, because they wish to subdue any unruly spirits to their will. 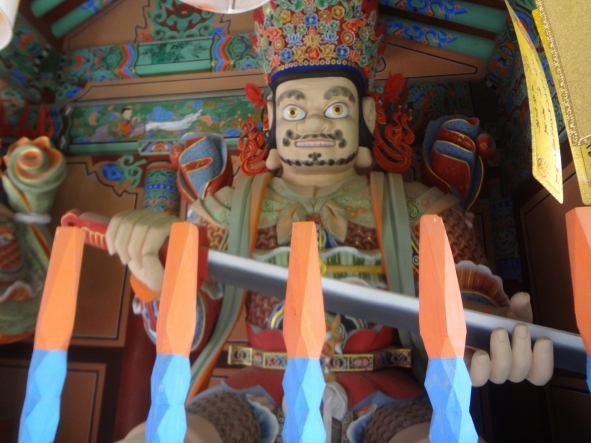 The final few steps of the one hundred to the top.

Inside the temple grounds. 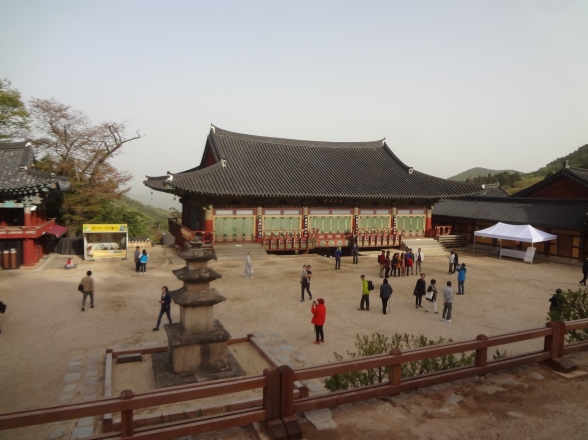 It was a lot easier going down, but one had to be careful as the height of the steps varied, and in places there weren’t any side rails to hold. A sign of age when you look for rails at the side. . . 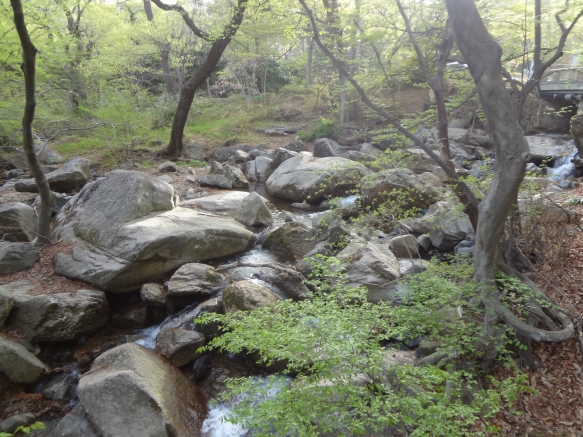 At least going down, once one had passed from the hundred step area, the sound of the small river was pleasant.

Once we were all down, it was back on the bus for the trip to the fish market, just under an hours dive – the traffic was a little lighter. 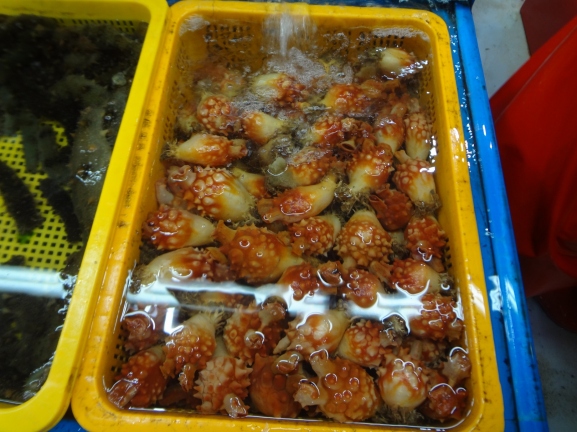 Not sure if they were a type of octopus or ????

All In know is that the pale worm things were not sausages.

Overall I was disappointed in the fish market – not a bit like I imagined.

It was not at all like other fish markets that we’ve seen – plastic containers holding packed fish, (still alive) and filled with continuous running water from hoses. Nothing on display, I suppose it is all about what one is used to seeing.

If you can’t afford a place within the market, use the pavement outside.

From the fish market we moved across a main road to the market. Very few items for sale that were not food. The market entrance is under the pink hoops. 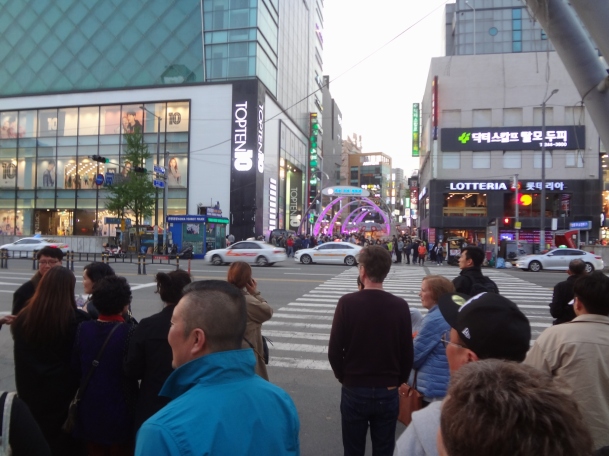 We were only allowed a very short time in both the fish market and this market because we were running late due to traffic jams. 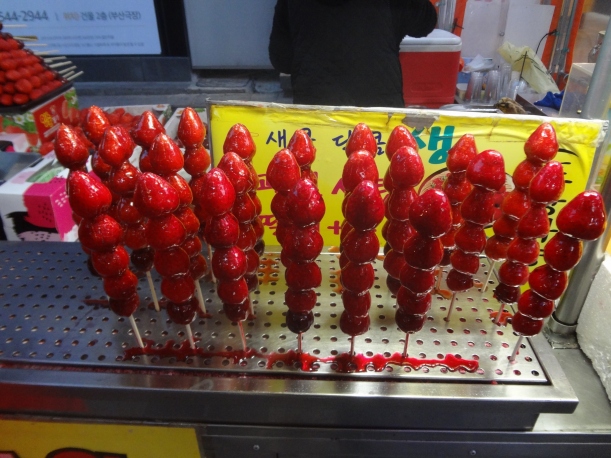 Strawberries on a stick – you bought the whole stick, which was dripping in some kind of syrup.  I wasn’t sure what they were until I got a very close look.

The road we crossed to get to this market looked interesting with int’l shops and local shops all mixed, but we didn’t have the time to explore.

It was getting dark so it was back to the ship, which wasn’t all that far from the two markets, and shortly after we sailed for Japan. 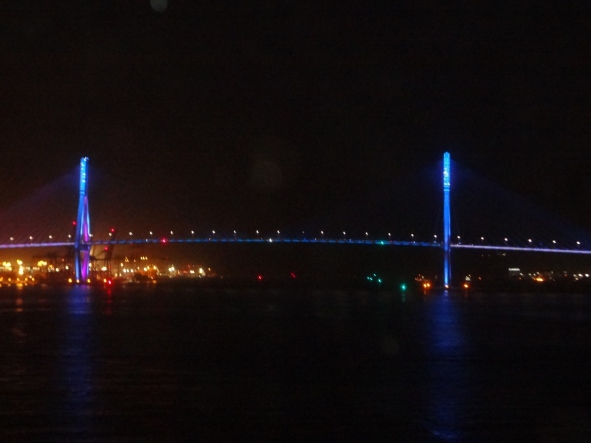 Gwangandaegyo or Diamond Bridge -the same bridge as in the first picture.