We visited Sachsenhausen concentration camp after meeting our ‘walking’ guide at the Berlin Zoo suburban station. He escorted us to the main Berlin station to catch the train for the fifty minute trip to Oranienburg, which is the nearest station to the camp. On arrival this guide handed us over to a camp guide.

From the railway station to the camp it is a 20-minute walk through the town. As we arrived at the camp local houses where pointed out to us, because they used to be the houses where the camp commander and his senior officers lived.

Our camp guide was a German tour guide, so it was interesting to hear how he explained the various facts of the camp.

He was knowledgeable and overall ‘neutral’ about the history and the various details of what happened in the camp. He did not dwell on the atrocities or make any comments.

At the conclusion of the tour he told us that the camp tour was the hardest tour for any tour guide, because the guides considered it disrespectful to make the normal friendly jokes to help the tourist to feel relaxed.

I studied the build up to World War Two, and the rise of Hitler, at college; so to visit this camp was a very moving experience because it brought to ‘life’ the Nazi era of the late 1930’s.

If you have the time while in Berlin it is a ‘must see’ place just to make sure that the world doesn’t repeat this type of history.

Prisoners were strung up by their wrist and flogged. 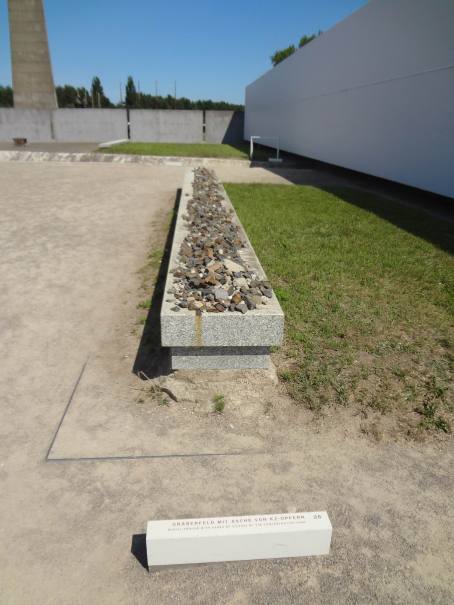 This is the burial ground of the ashes of the victims of the concentration camp. As you see the photo above shows a small wall with stones on the top. The stones were placed there by Jewish visitors in remembrance of the murdered Jews.

The camp was created in 1936 to house political prisoners, homosexuals, Jehovah’s Witnesses, and a small number of Jews.The Jewish numbers increased greatly later. Thousands of Russian & Polish civilians, and later in 1941, 12,000 Russian prisoners of war were also sent to this camp, most died.

Visiting the camp takes a full day, and is a very sobering experience. I am glad that I had the experience, but I can not comprehend why or how anyone could be so calculating barbaric and inhuman, to another human being.

The photographs above are just a small sample of the many that I took during our visit.