The Hawks Bay earthquake of 1931 flattened Napier, and killed 161 people and injured thousands. The local newspaper at the time wrote that the town had been wiped off the map. 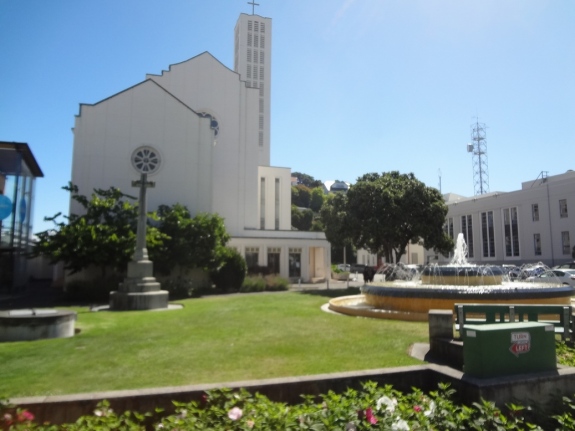 This is what is there today – still a church, and a garden of remembrance.

The landscape changed for ever. Near Napier there had been a large lagoon called Ahuriri Lagoon. The land around Napier rose two metres and the bottom of the lagoon rose 2.7 mtrs, which cause the lagoon to drain away and became dry land. Today this land is home to an airport, industrial areas and farmland.

Before the earthquake – picture from NZ Encyclopedia.

After the earthquake – picture from NZ Encyclopedia.

One of the first jobs was to clear the dead fish from the lagoon as the water receded – the stench must have been terrible.

During the quake fires broke out and the water lines burst, so the fire brigades were limited in their fight against the fires, and many buildings were destroyed.
Fortunately, a Royal Navy vessel, HMS Veronica, was moored off shore so she sent crew members to help the town and acted as the communication centre by contacting the authorities in the Wellington (the capital) and letting the world know of the disaster. The crews of two merchant ships also gave help to the town.
Later two additional Royal Navy ships sailed from Auckland with emergency supplies of food, tents, medicines etc.
The history of the rebuilding of Napier has the feel of a novel. The authorities appointed two men to oversee the clearing away of the damaged structures and to start rebuilding quickly. They realised that the population was falling as people moved away to find shelter or jobs etc and the only way to stop the population decline was to start rebuilding quickly. 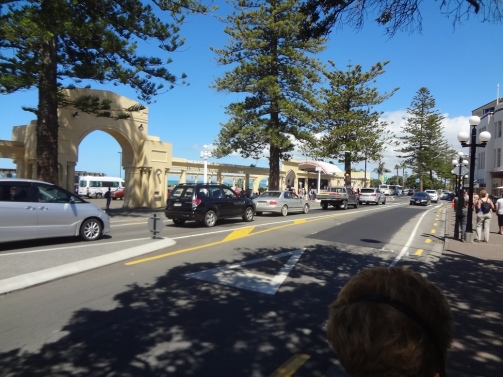 The rubble from the town was pushed out to sea to create this shore side garden and recreational area. Skating areas, put-put golf, music and some beautiful gardens. A great memorial to those who perished. 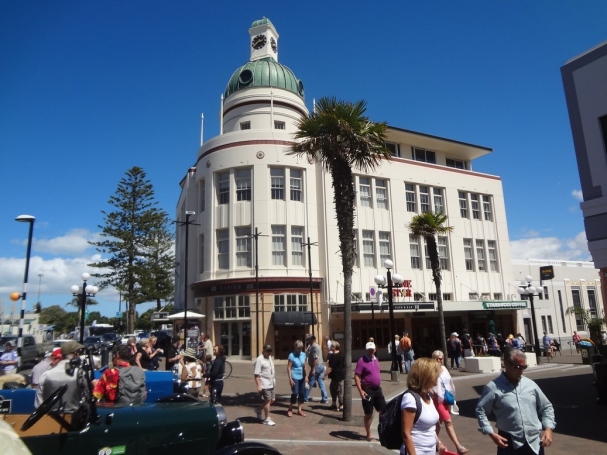 The town was rebuilt in the art deco design and fortunately has not been allowed to change. There were moves to pull down certain buildings and to build ‘new’ 1960’s style, but the local historical (Art Deco0) society managed to block most of these moves. 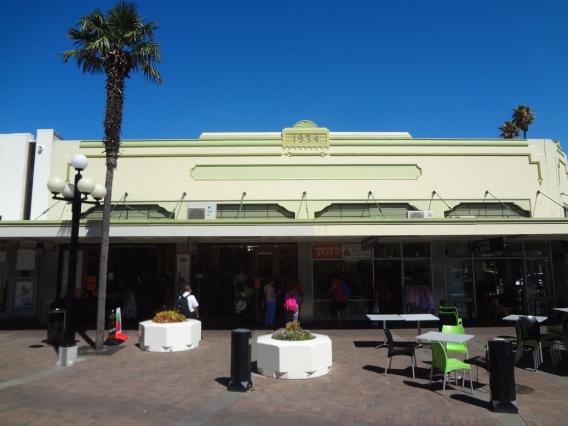 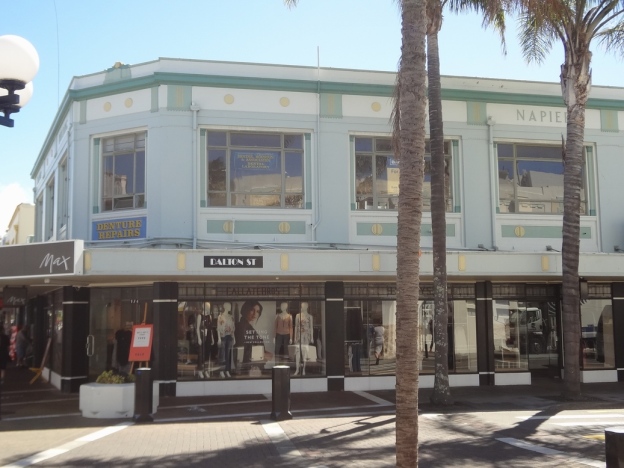 My memory of Napier of the mid 60’s was that every building was painted white, but when I saw the town recently, I thought my memory had played tricks because all of the buildings were painted in pastel colours of the 1930’s. Note the street sign, which is in the characters of the 1930’s.

Maureen and I had decided to do a guided walk offered by the art deco society of Napier and during the short intro chat, the guide mentioned that the buildings used to be all painted white in the 60’s, which pleased me that my memory was not at fault.

Bertie Wooster would have felt quite at home.

The locals take being in the part very seriously, which added to the enjoyment of our visit.

The boy was real when this statue was made – he is waving at his mother.

The model for this was not a ‘model’ as such, but a local lady of some standing in the community. Our guide pointed her out to us and mentioned that a year or so earlier he had completed a few small jobs for this lady’s home. She still lives in Napier and is now in her late eighties.

Many of the shops are dated from the 1930’s – our guide explained about the lead lining in the glass, the type of wood and even the ‘in go’. Double frontage windows i.e windows on both side of the entrance door.

The ‘in go’ for the shop above – i.e the area between the pavement and the actual shop door. When I was a child most shops had an ‘in go’, but I didn’t know what it was called then, but it was an area where you could stand and look in, before deciding to go in, and speak to a staff member.

Theater built in 1938 and later expanded to the right, but I was more interested in the original frontage. Our guide had the key so in we went, 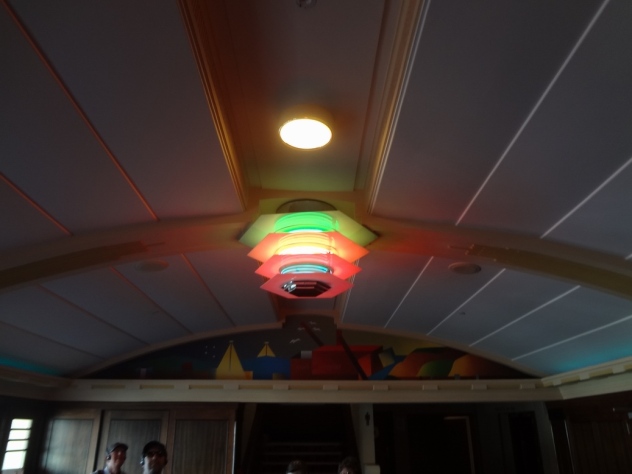 Remember this type of lighting in the foyers of cinemas in the 40’s & 50’s? This was well before multiscreens had been ‘invented’.

A better view of the ceiling in the foyer of the theater. 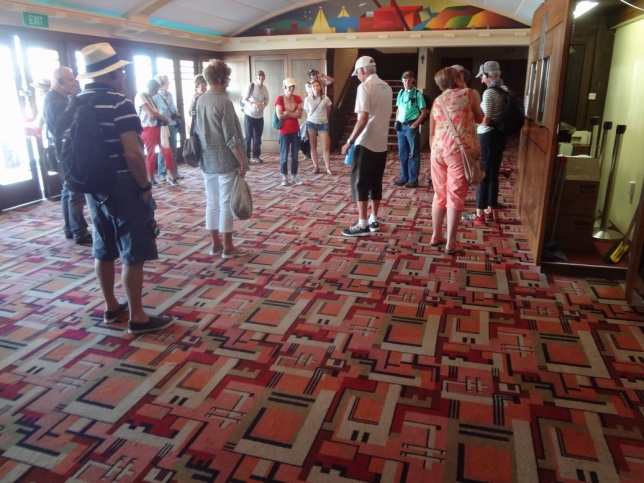 Some years ago the management realised that the carpet had reached the end of its life, so they decided to replace it, but they wished to keep the art deco theme. They found a clean piece of the original carpet and sent it to Australia where a carpet manufacturer copied the design of the 1930’s and now they have a new carpeted foyer à la 1933.

An unusual art deco building – the two flags are New Zealand and Germany and the owner of the building, Mr Hildebrandt, being an immigrant, wanted to show the friendship between his old home and new home and that he arrived in Napier by sea.

Mr Hildebrandt’s building in on a corner, and the design is carried all around.

For the old Conway readers I found something that I just had to photograph, 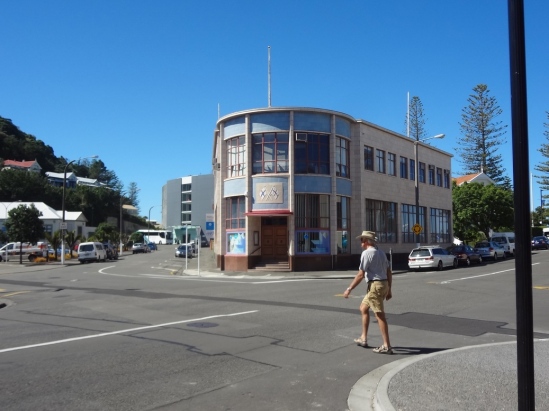 The art deco building above had been designed with a nod to a ship, such ‘naval’ designs being common in the 1930’s.

With the zoom on I took the next picture.

New Zealand Shipping Company, a company in which many old Conway’s sailed . . .

Art Deco expressed all the vigor and optimism of the roaring twenties, and the idealism and escapism of the grim thirties.

Its decorative themes are:

Sunbursts and fountains – representing the dawn of a new modern age.
The Skyscraper shape – symbolic of the 20th century.
Symbols of speed, power and flight – the exiting new developments in transport and communications.
Geometric shapes – representing the machine and technology which it was thought would solve all our problems.
The new woman – revelling in her recently won social freedoms.
Breaking the rules – cacophonous jazz, short skirts and hair, shocking dances.
Ancient cultures – for oddly enough, there was a fascination with the civilizations of Egypt and central America.
All of these themes are represented on the buildings of Napier, most of which are still standing today and are lovingly cared for by their owners.

Maureen & I walked the main street before taking the Art Deco walk, and we must have had our eyes closed, because we didn’t see anything until the guide pointed out the various styles and shapes. His talk was fascinating and he had the ability to bring all that jazz to life.

If you ever manage to get to NZ, make sure Napier is on your bucket list.

I managed to get some picture of the inside of a few buildings (point and click through windows etc), but I don’t want to bore readers.