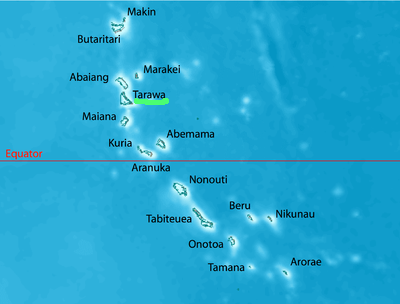 In 1788 Thomas Gilbert was the Captain of the Charlotte, which had sailed to Australia as part of the first fleet carrying convicts.
After discharging his convict passengers Captain Gilbert sailed for China and passed through a group of islands that we now know as The Gilbert Islands.
He made sketches of the islands and named Tarawa (marked with green above), Mathew Island after the owner of his ship. He also named the large lagoon Charlotte Bay after his ship. Fortunately his sketches have survived. 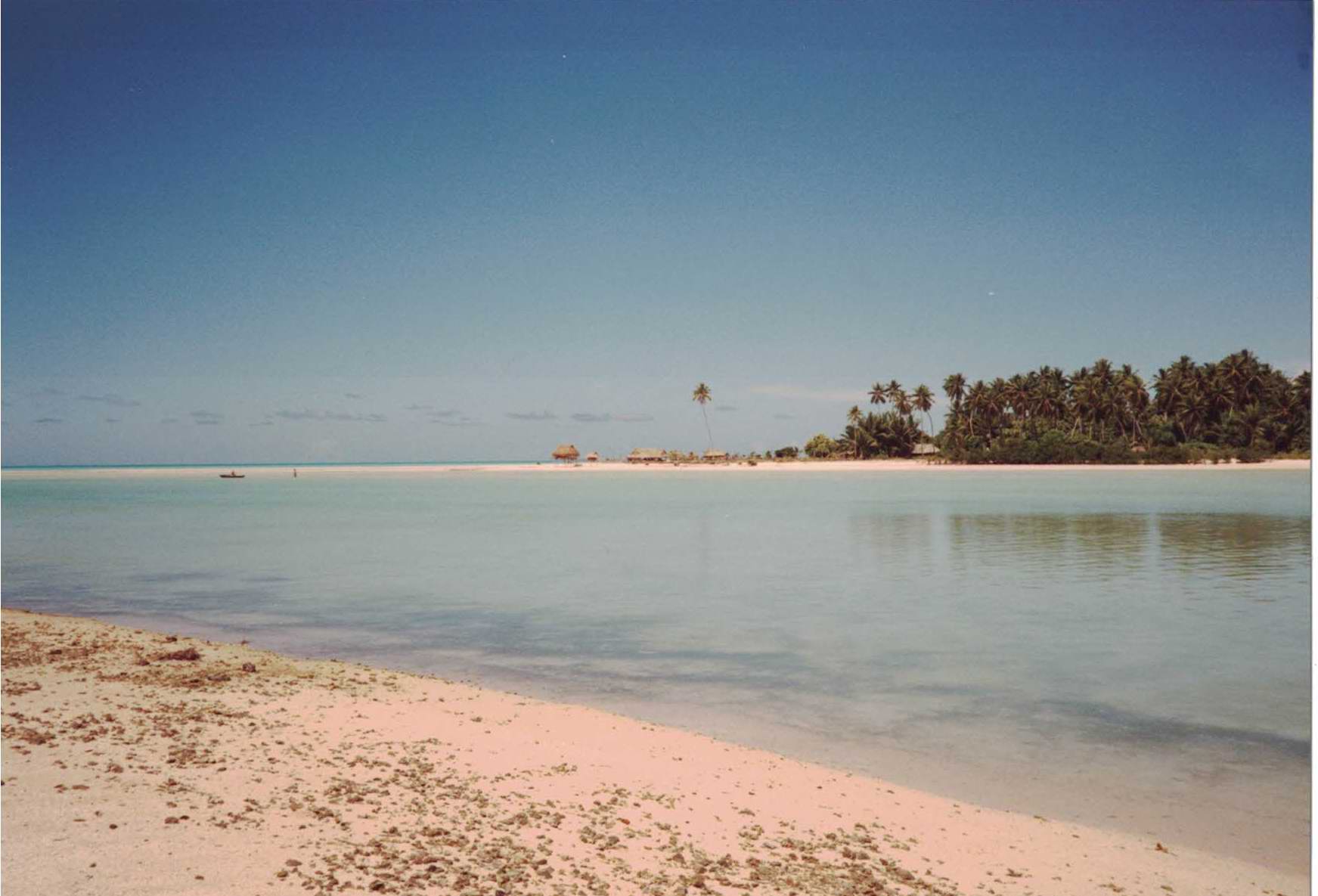 He did obtain a cargo for the East India Company and sailed back to England.

South of Nauru you can see an island called Kiribati, which is the new name for Gilbert Island. Kiribati (pro Ki-ri-bass), which is how they pronounced Gilbert in their own language (Gilbertese).

Kiribati consists of a thirty-three islands with a land mass of 803 sq km (310 sq miles) but spread across 5,180,000 sq km (2million square miles) of ocean. Tarawa, the atoll where I landed, is 208 km (80 miles) north of the Equator, which was home to about 2000 people, or one third of the total population of Kiribati.
Of this total, about 300 were Europeans mainly British, Australian & Kiwis mostly employed as ‘advisors’.
The people were big in to ‘Manyana’, but done very politely.

The height of the land above the sea was about 2.5 mtrs (8 feet), fortunately the weather was fine. 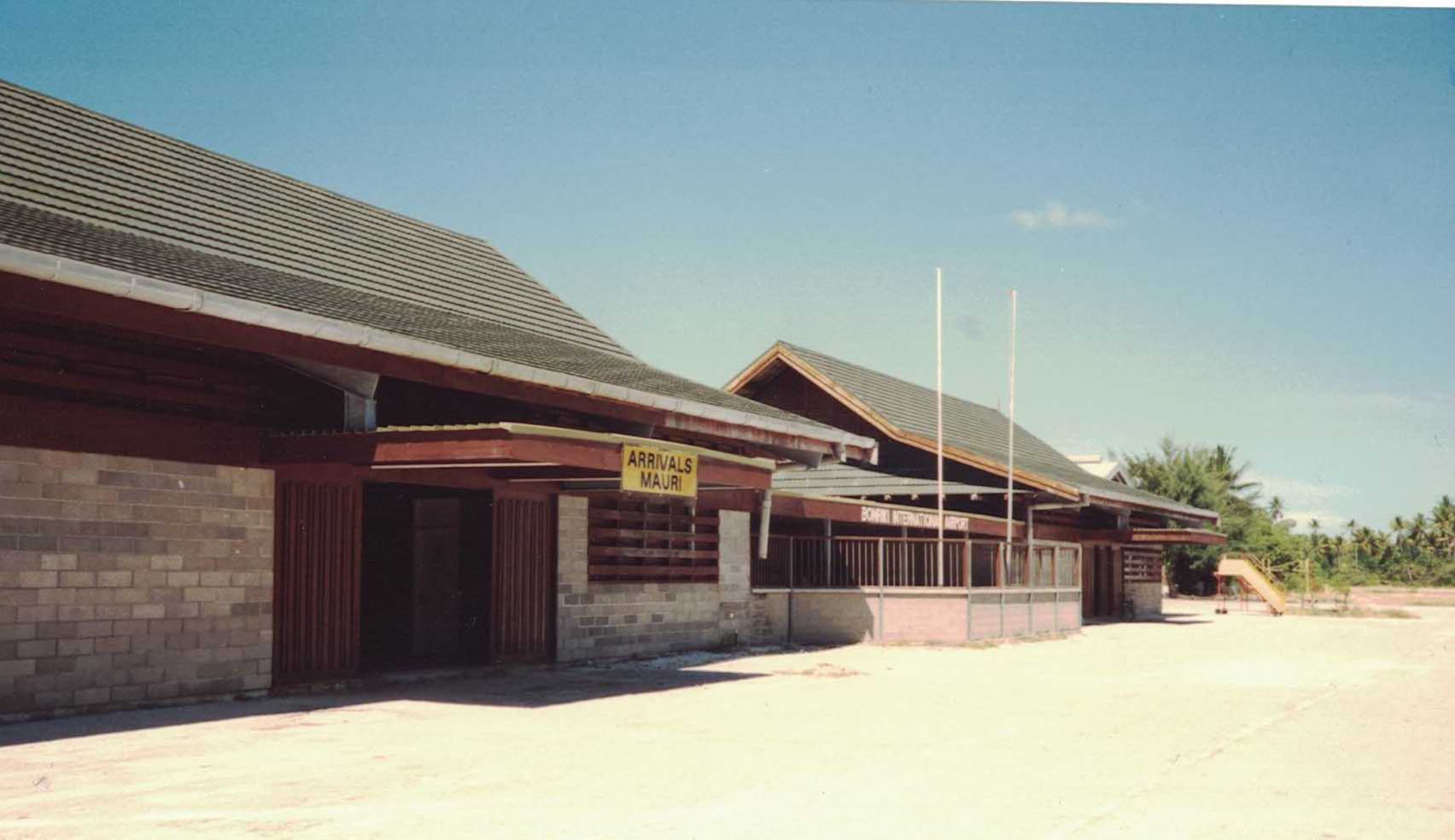 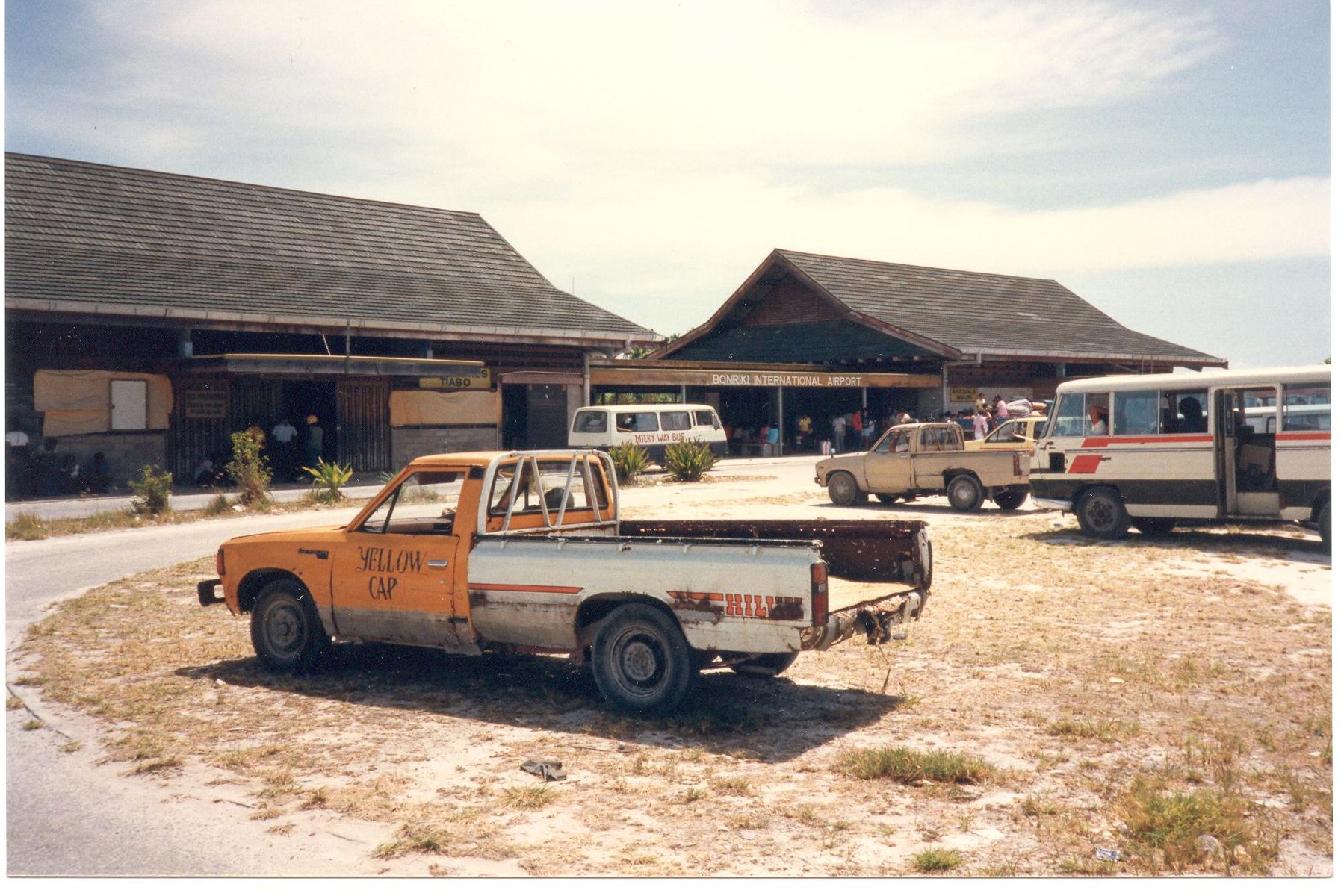 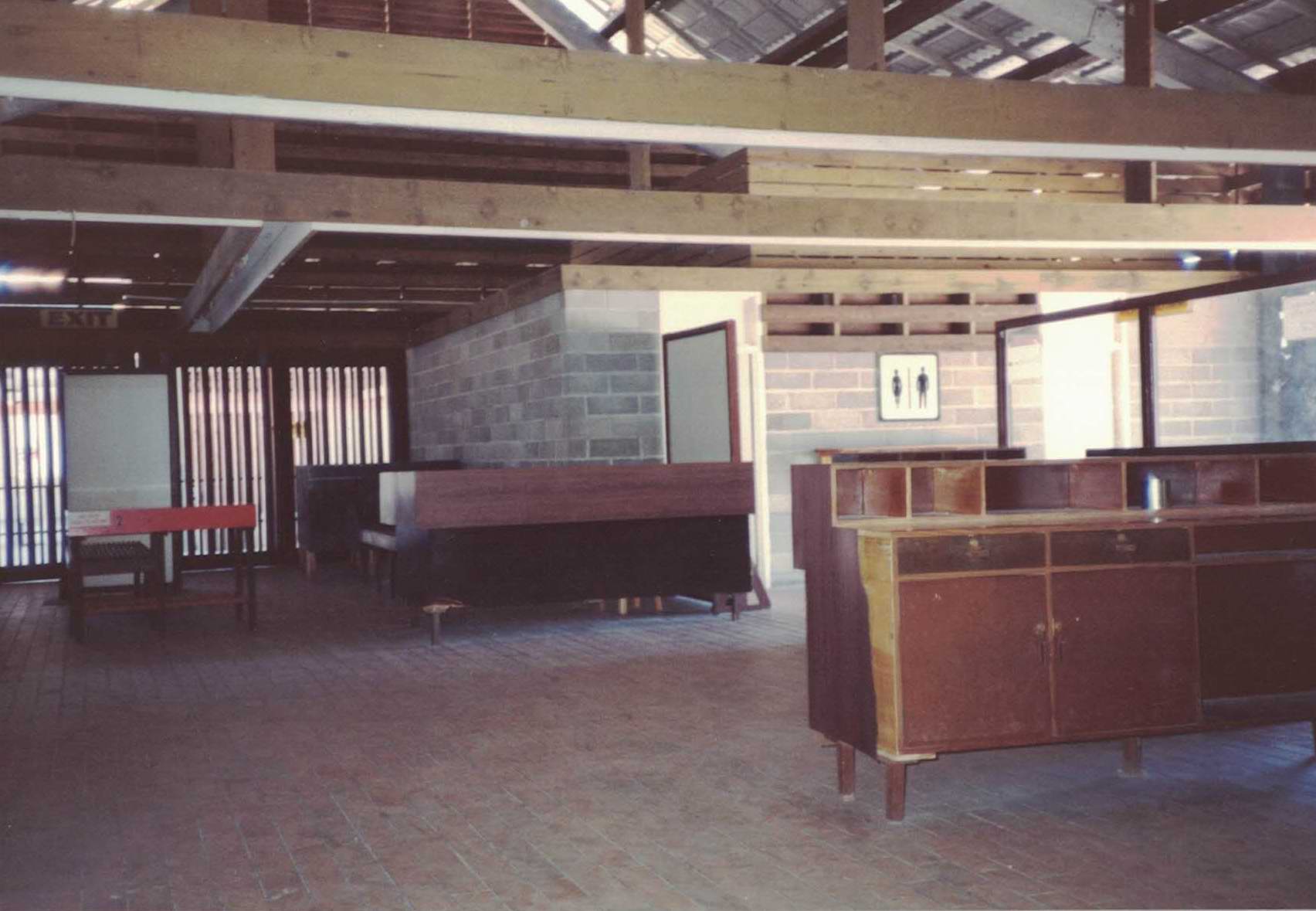 The flight from Nauru was not a long flight but when I stepped out of the aircraft the heat hit me. Above is the passenger terminal and arrival hall, where I was met by our agent Kenton, who was the British Government advisor to the Kiribati Co-Op Wholesale Society, thankfully shortened to KCWS, but known locally as K-C.
He took me to a hotel in Batio, (pro Bay-she-oh), which is the capital on the main atoll of Tarawa. 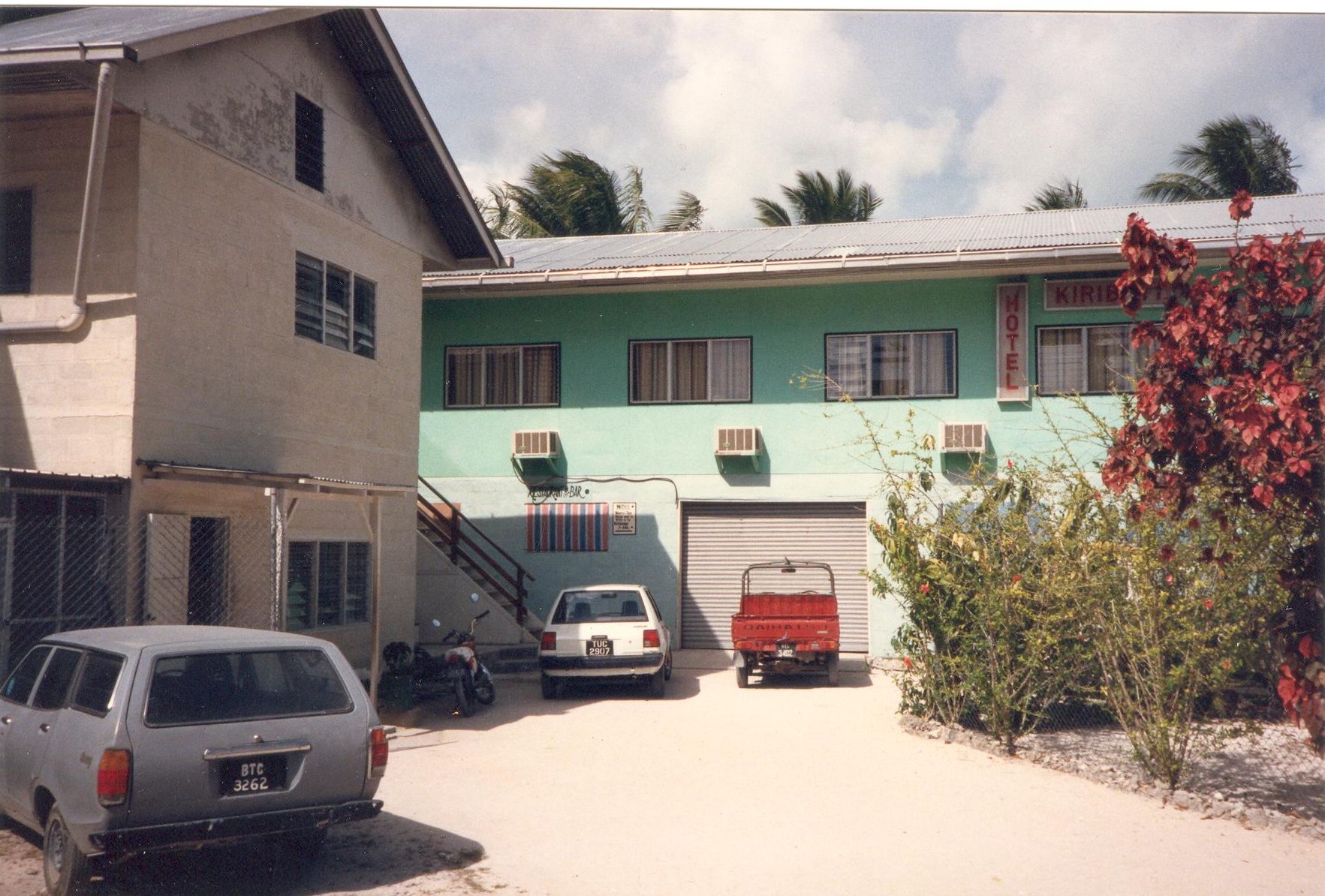 My hotel is the green building. 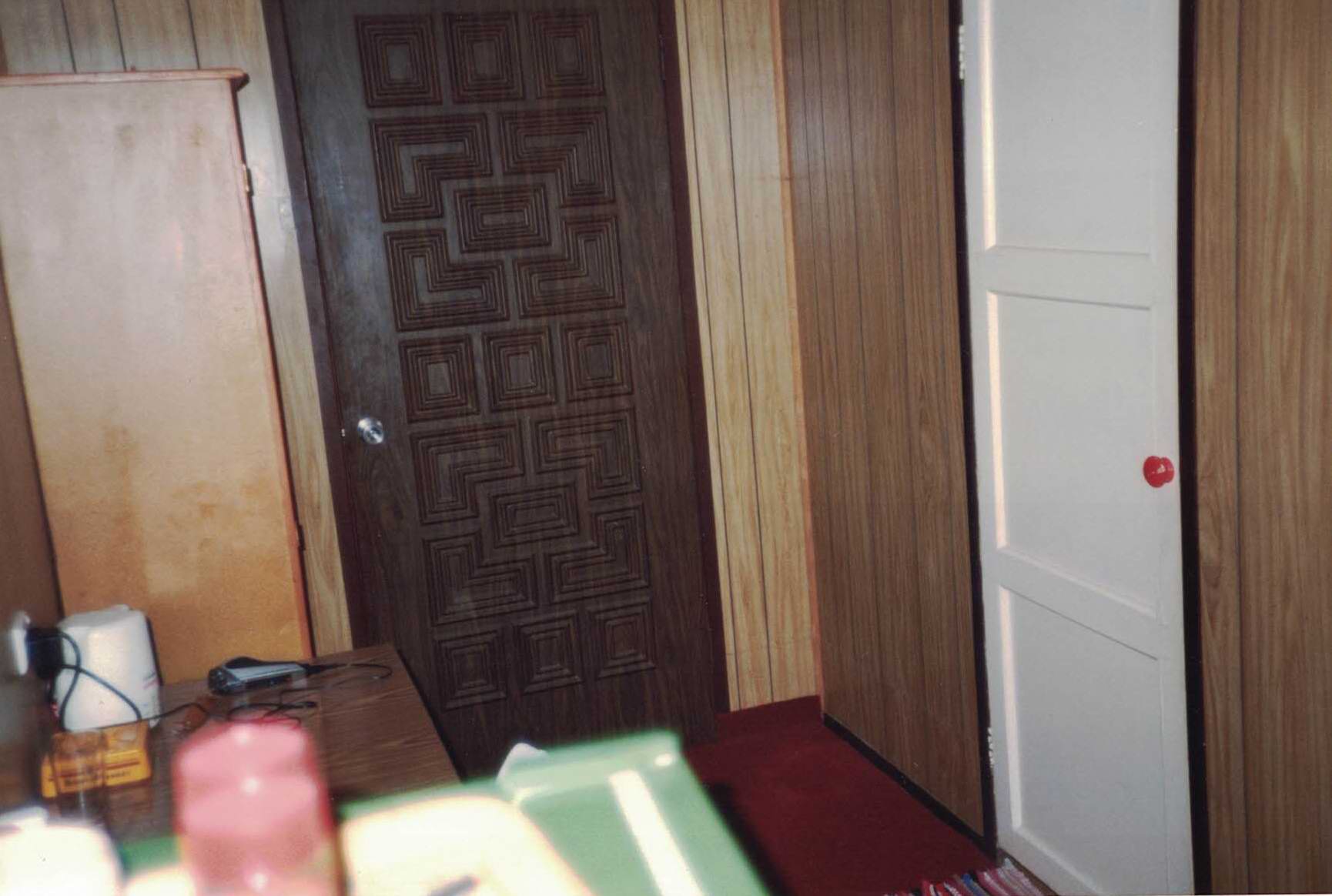 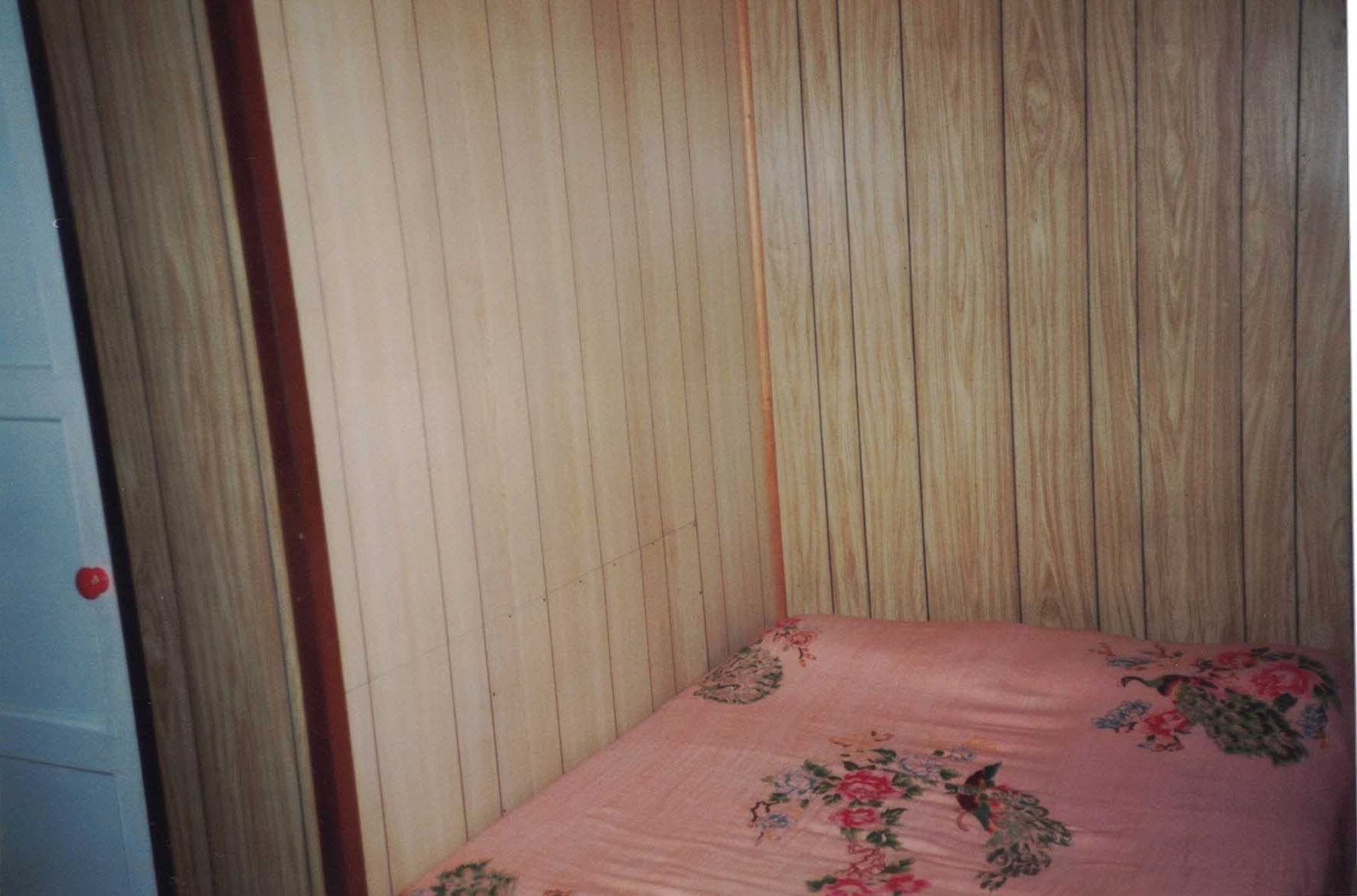 After the empty suite in Nauru my room in Batio was small . . . . the white door with the red knob was the bathroom door.

I switched on the air-conditioning unit in the hope that it would cool the place down – the agent and I had agreed that he would show me around in the morning – he said that it would be cooler. I only hoped that I would not fade away with heat stroke in the meantime.

I tried to cool off in the shower, but the water pressure was not all the at good, so I sat in the bar, which was the coolest place in the hotel. At that time, they did not have their own beer but imported Australian beer, I did not care as long as it was cold. 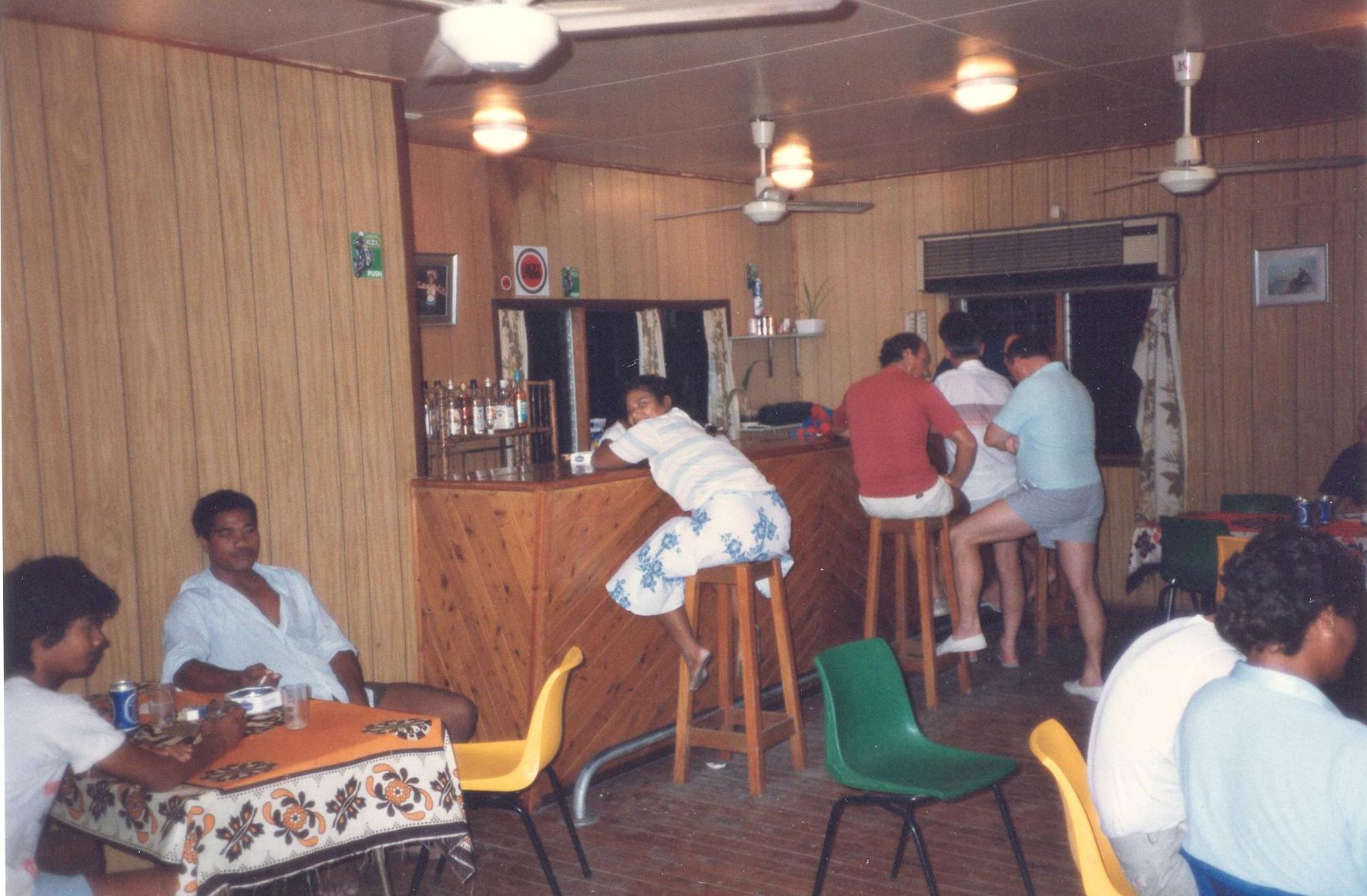 The drinks were cold, and the people were friendly, and the tuna fish was fresh.
During one conversation when ordering a beer I did ask about the strange patterns on the wooden floor. Apparently, they were ‘argument’ patterns – a few beers and a wrong word and it was fight time with bottles and knives.

They did not have TV and the radio only broadcast for three hours a day.

I went to bed early.

Next morning at breakfast I picked up the menu – it was the same one from the previous evening. I realised that the menu was not for choosing anything, but to read and be aware of what you might not receive, because the food was reliant on what had arrived from Australia or New Zealand in the last week or so. The one thing that was super fresh was the fish, all locally caught, but most other foods came from overseas.

I commented to the young lady who wanted to know what I wanted for breakfast, that the pattern had changed on the floorboards. She shrugged and said, ‘They fight’, and then asked what I would like for breakfast as if the blood stains were normal, which I suppose they were.

I asked for black coffee, toast, and marmalade.
‘Marmalade is Off’ she said.
‘What kind of jam do you have’, I asked.
‘We have jam jam and we have marmalade jam.’
‘I would like toast and marmalade jam, please.’
‘OK’ she said, everything was very proper and it was hard to keep a straight face. 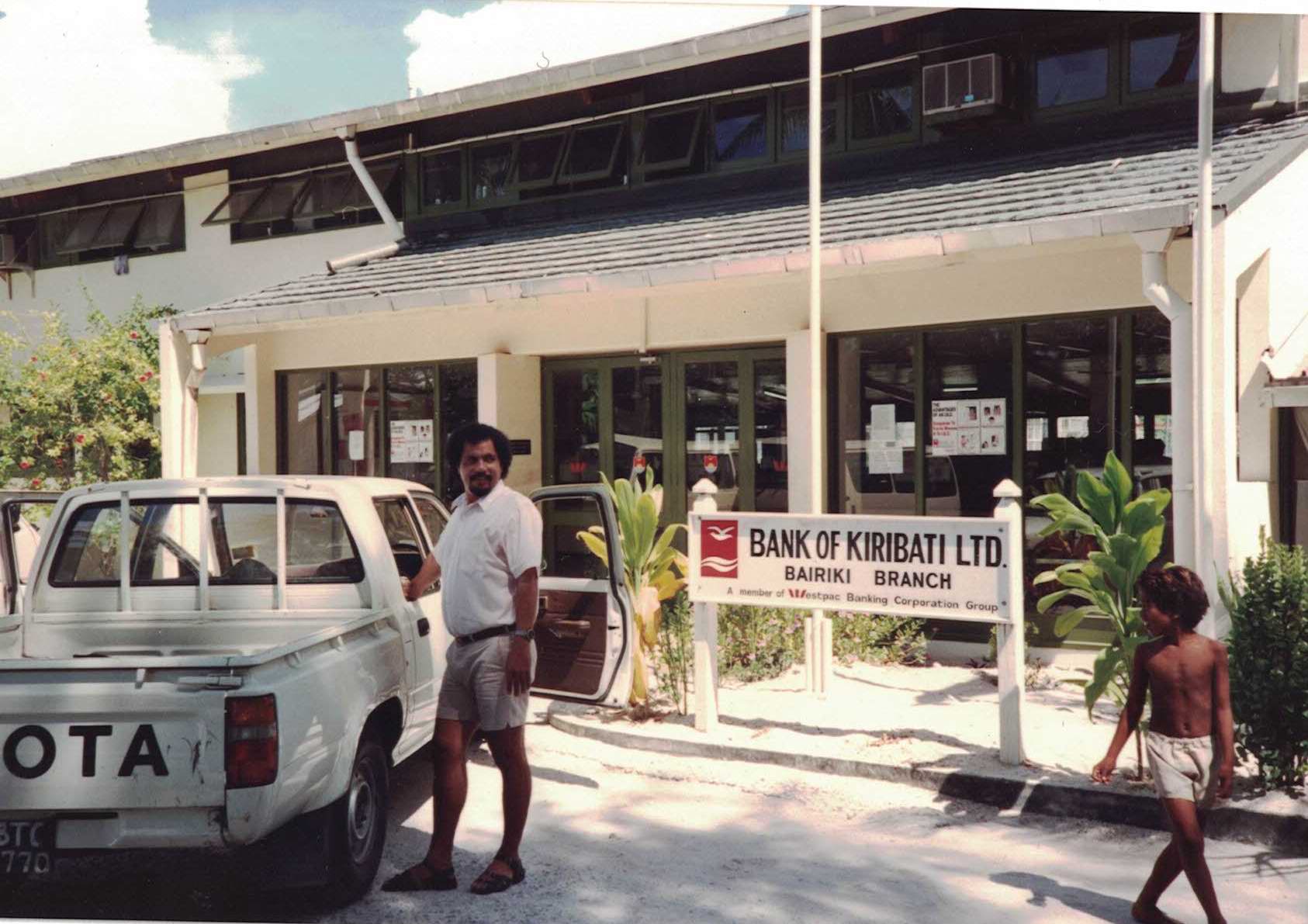 Kenton arrived on time and I was given the Cook’s tour of the atoll. 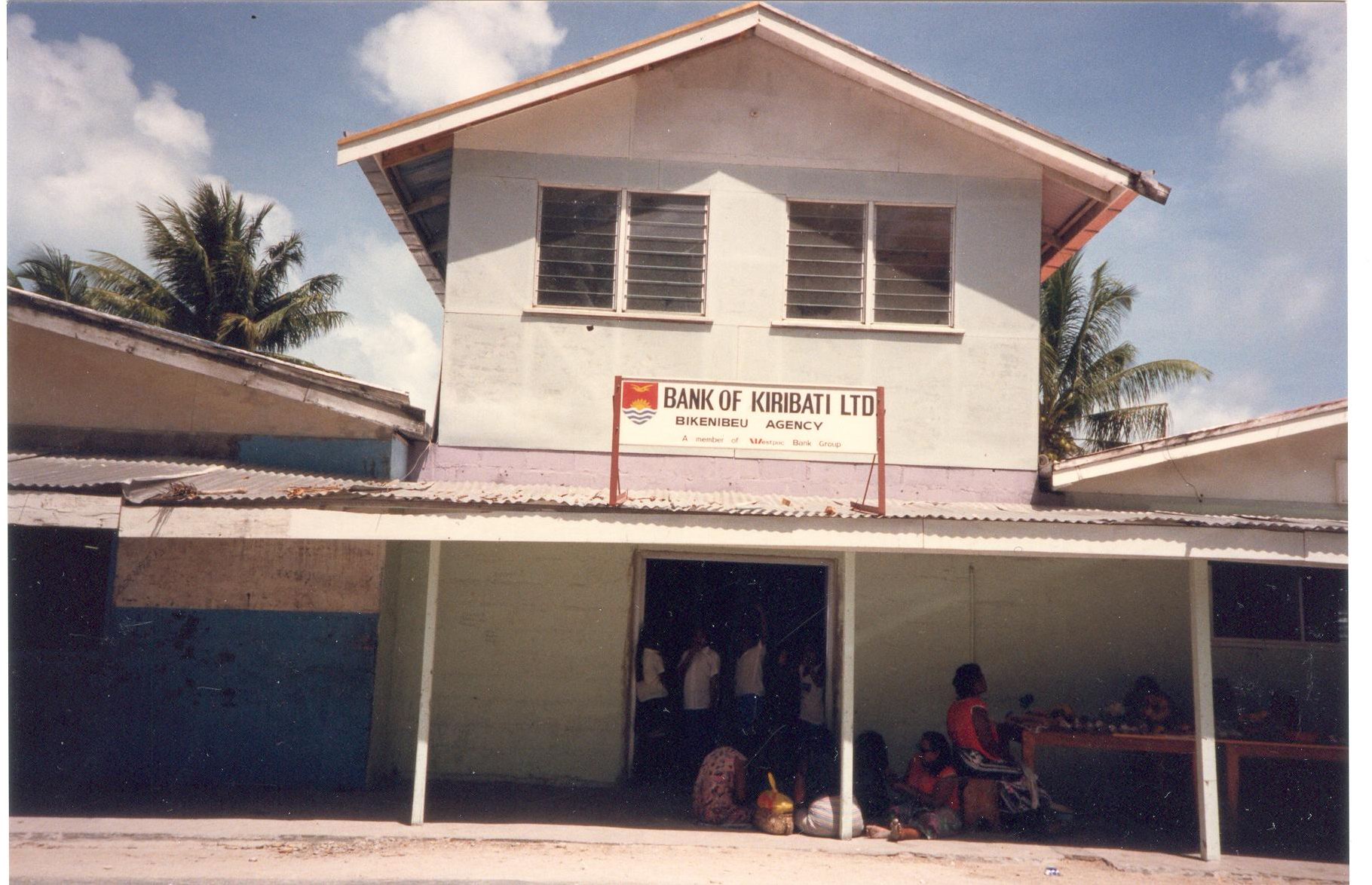 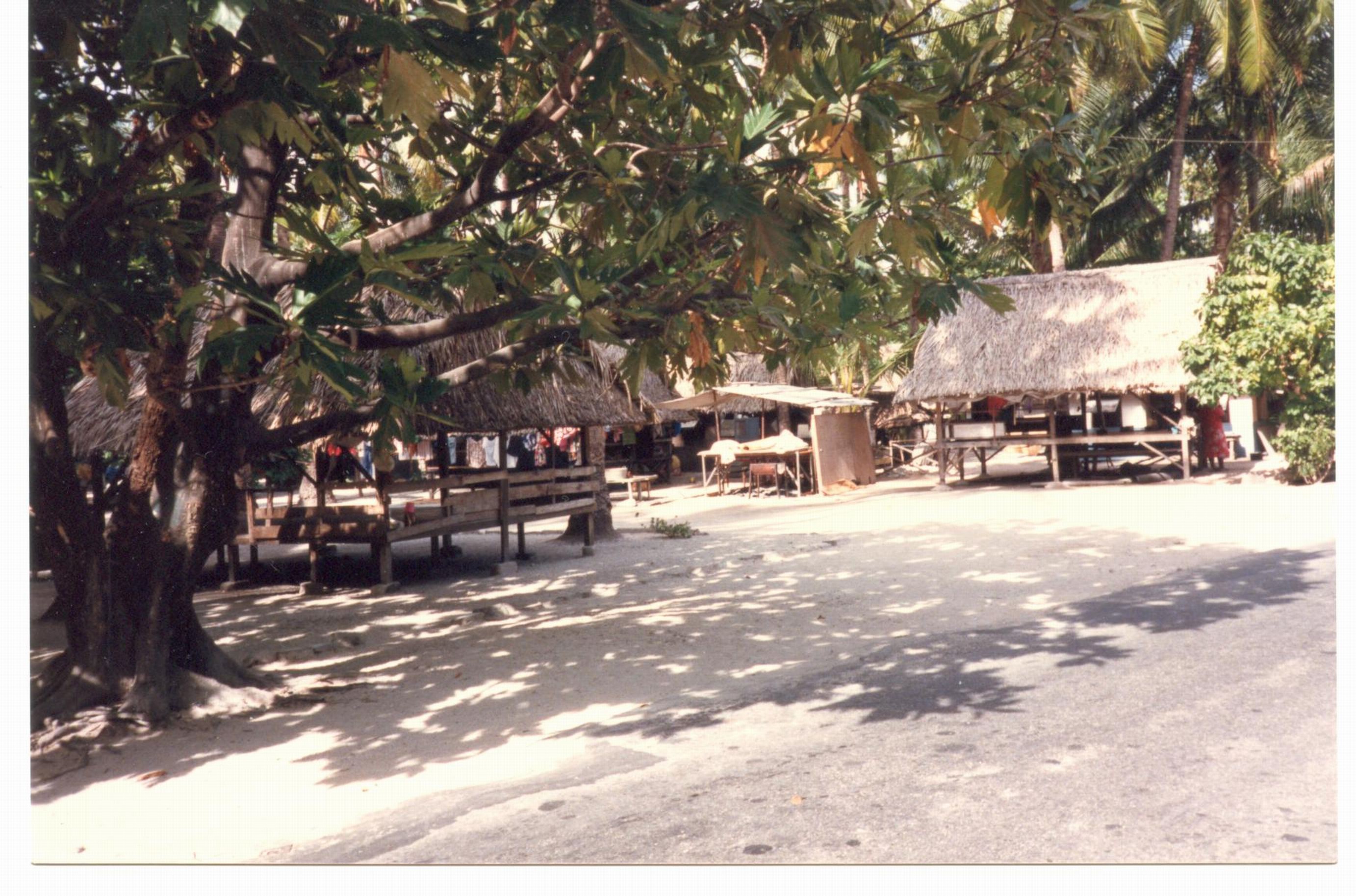 It was a mixture of traditional and modern, but interesting and as English is the national language I could ask as many questions as I liked. 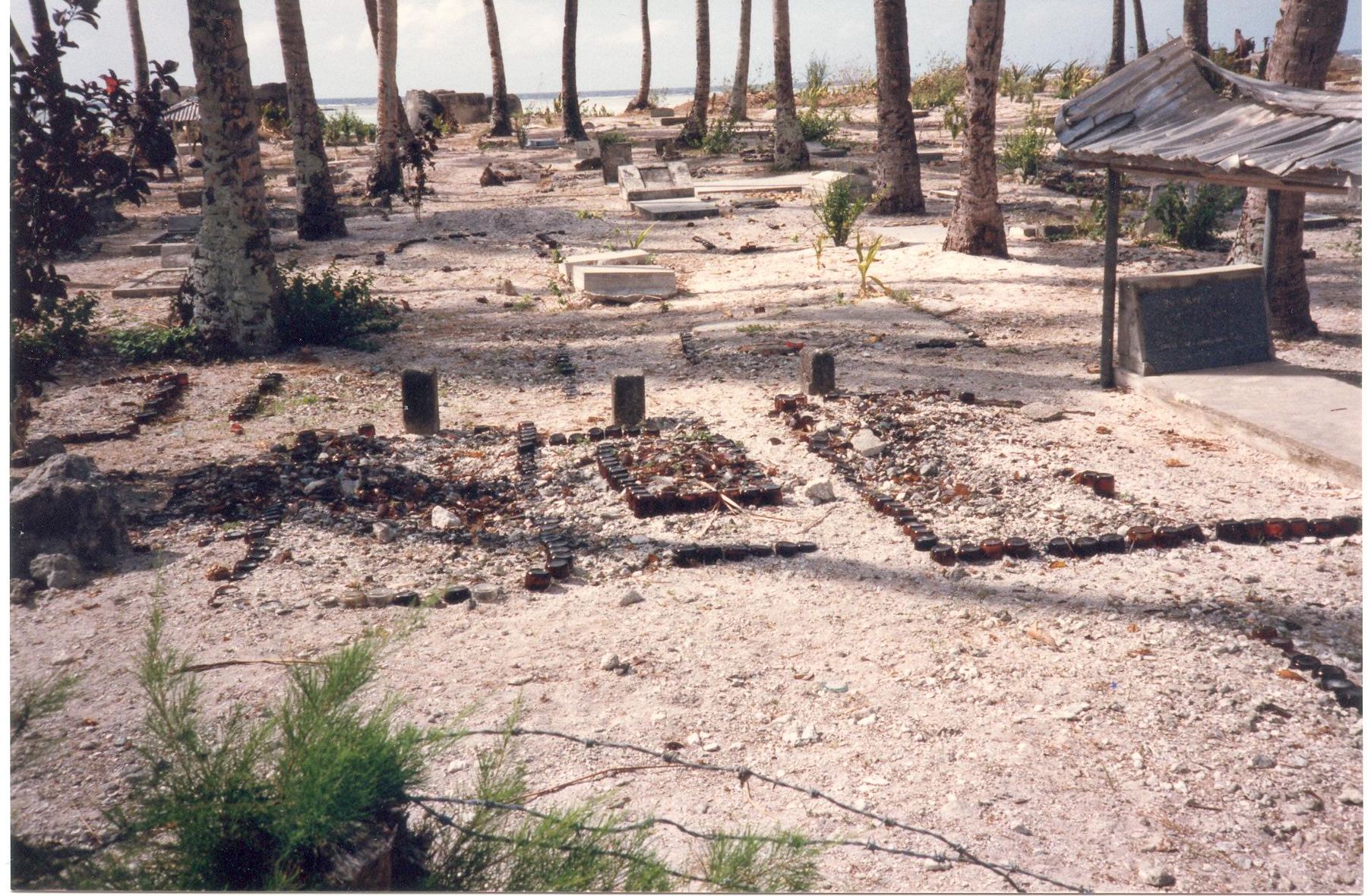 Near the old WW2 airstrip, I was shown a local cemetery. The depth of the soil is very shallow and to mark a grave they would use old beer bottles. 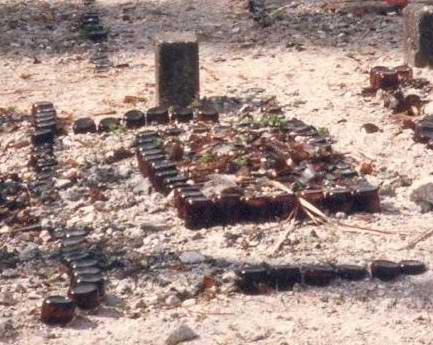 Above is a closeup of one of the graves. 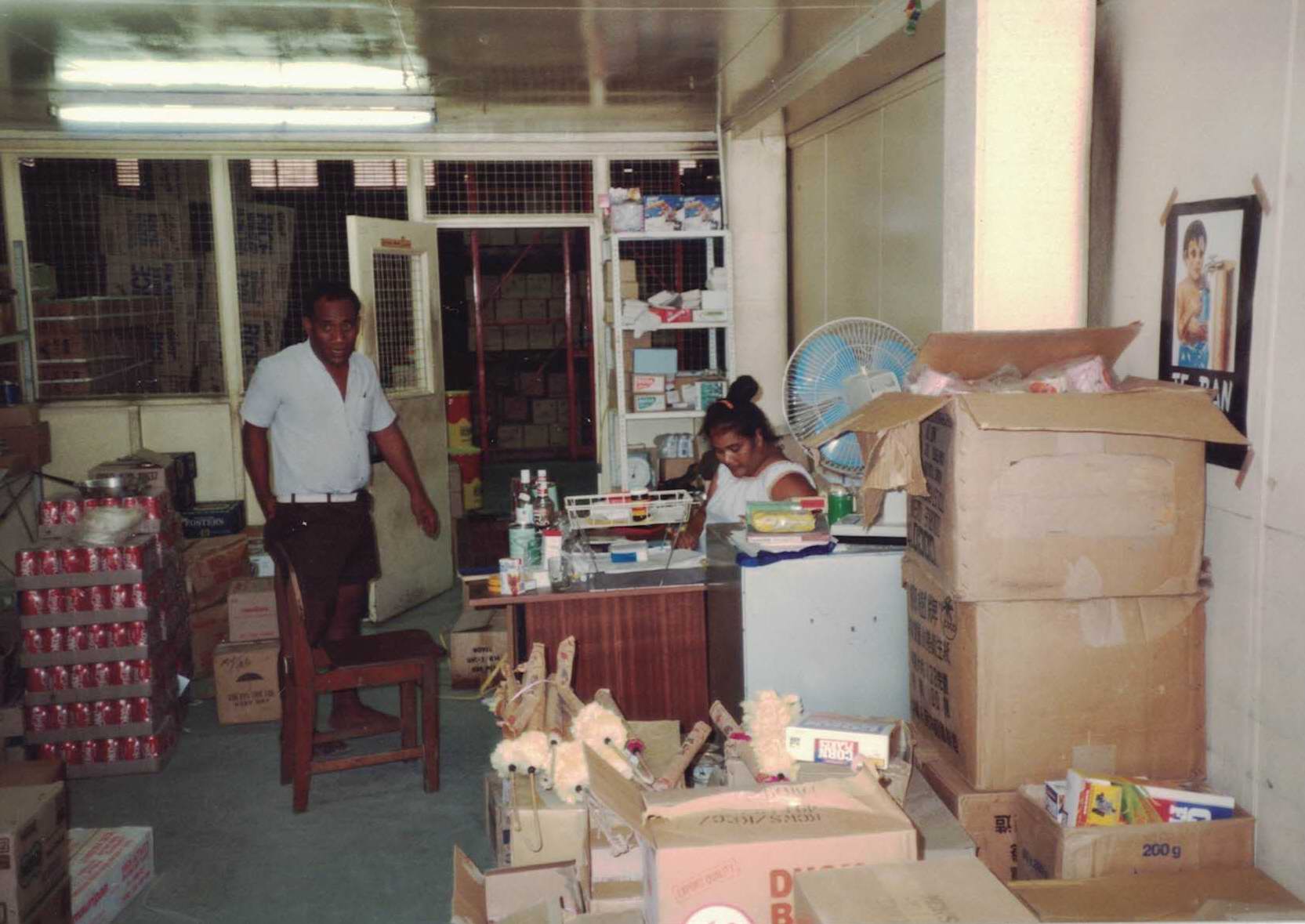 KC imported basic foods and general items, mainly by sea, and then they would supply the various shop who were members of the Co-Operative.

I knew that our agent would not survive on our traffic alone – it was just a sideline for him – but it was a pleasure to see our company name SKYPAK displayed prominently, and he wanted more stickers & signs.
The people in the above picture worked for KC.

The main problem that I had was communicating with Kiribati from Sydney – Kiribati was not linked via ISD so if I wished to speak to Kenton I had to go through an operator. . . which sometimes was very time consuming.

The flag of Kiribati

The flag of Kiribati is red in the upper half with a gold frigate flying over a gold rising sun, and the lower half is blue with three horizontal wavy white stripes to represent the ocean and the three island groups, Gilbert, Phoenix and Line Islands.
The 17 rays of the sun represent the 16 Gilbert Islands and Banaba Island, which used to be called Ocean Island.

Next stop Ellice Is. now called Tuvalu = Eight standing together . . .