We were a small group of three ‘mature’ couples on our first visit to Bali.
After a lot of research we decided that Ubud would be our first stop rather than the beach side resorts, and that Kenanga Boutique Hotel would be our Ubud accommodation – a good choice.

Our drivers were waiting for us just outside the arrival hall. We had booked the Kenanga Boutique hotel’s transport on the basis that it would be efficient and on time – it was. We expected a single large vehicle to accommodate all of our bags as well as ourselves; instead we had two five-seater vehicles with plenty of room for our luggage. We split three and three, so we had a comfortable ride to the hotel, which took 65 minutes. Unfortunately the trip was in the dark so we didn’t see much of the countryside.

Checking-in was fast, during which time we were offered fruit drinks and cold towels.

This photo was taken next day, which is why it is daylight.

Our first floor bedroom was large, as was the bathroom, which had a rainwater shower head with plenty of pressure. The abundance of space allowed my wife and I to fully unpack and sort ourselves out.

We had a large balcony over looking rice fields. The balcony was large enough to accommodate all six of our group for an evening chat and a glass of wine. 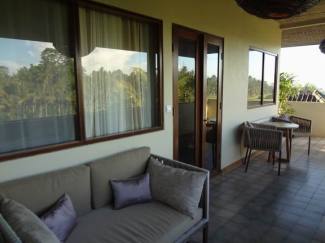 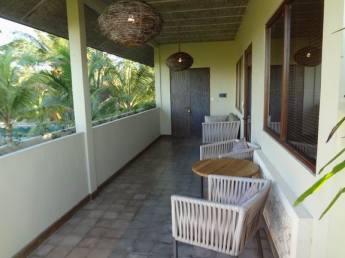 In addition the lock on our room door (top picture) we also had a lock on the outer door of our balcony (lower picture).

Breakfast was al la carte with various choices of Asian or Western meals. The staff members were very friendly and happy to answer our questions.

At the end of the meal the Manager of the hotel introduced himself and asked us how our rooms were for comfort, and if we slept well. It was a pleasure to complement him on his hotel, because few managers bother to ask guests for their opinion.

Later in the day a French couple arrived who turned out to be the husband and wife owners of the hotel. The following morning Patricia (one of the owners) asked us for our opinion of the hotel, and whether we had any suggestions to add to the already high service. We were happy to chat with her about her hotel, and the relaxing ambience that her and her husband had created.

The appeal of the hotel, with only fifteen bedrooms, was pure relaxation. The hotel owned rice fields behind the hotel and we would wake in the morning to the distant sound of ‘bird scarers’, as these ‘scarers’ chased very small birds from the rice fields. The rice was close to being harvested. The people who scared the birds had plastic bags tied to sticks and as they flicked the stick the bag would give off the sound of a crack, which was enough to scare the birds, but not the peacefulness of the day.

View from our balcony.

The farmers who grew the rice had an arrangement with the hotel that they would work the hotel’s fields and split the profit with the hotel owners – it seemed to work well for both parties.

The horizon pool was always welcome after a day of site seeing.

The evening meal was cooked to order; nothing was held ‘just in case’. The food was a mix of French and Bali influences. 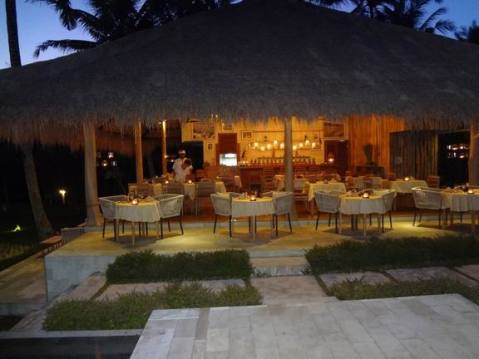 The hotel’s Terracotta restaurant; about to start serving the evening meal.

We did eat out one evening, at a French / Balinese restaurant recommended by the hotel, but we all considered that the hotel food was better.

Part of the walk from our rooms to the restaurant for breakfast.

A delightful hotel in which we slooowed down . . .after all isn’t that what a holiday is all about?