Cowra is the only place in the world that has a Peace Bell and is not a major city.

In 1951, Chiyoji Nakagawa, who at that time was a council member of the UN Association of Japan visited Paris at his own expense to observe the 6th General Assembly of the United Nations.
He obtained the aid of Benjamin Cohen, who was the Secretary General, so that he could appeal to national representatives and said

“I want to collect coins and medals from people all over the world, going beyond differences in ideas, principles, regions, races, and nationalities, to melt them into one moulded piece to cast a bell as a symbol of the wish for peace and present it to the United Nations headquarters. I want the bell to be tolled for peace.”

Starting with the coins that he collected from the member of the Assembly, he collected coins and medals from sixty countries. He spent the next three years collecting coins and eventually he was able to commission the creation of a bell. When completed the bell had the Japanese writing carved on it that said – “Long live absolute World peace .”

A hand full of sand from the atom bombed area of Hiroshima, sent by a Zen Priest, and another handful of sand from Nagasaki, sent by a Christian girl, travelled with the bell to be buried under the foundation stone of the bell.
The bell is located in the Japanese garden of the United Nations and is rung twice a year – 21st March, which is Earth Day, and 21st September, which is the International Day of Peace. 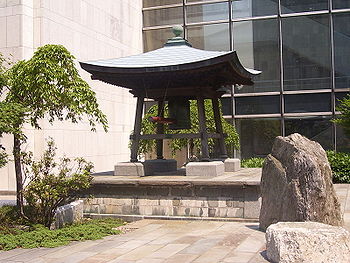 The original bell located in the UN

The Australian Peace Bell contains coins from 106 UN member countries and is a replica of the bell in the UN. The Australian bell was awarded to Cowra in 1992 for their contribution to world peace and international understanding.

A ceremony is held on World Peace Day – 3rd Tuesday in September.

I do hope we have peace in Ukraine before September! 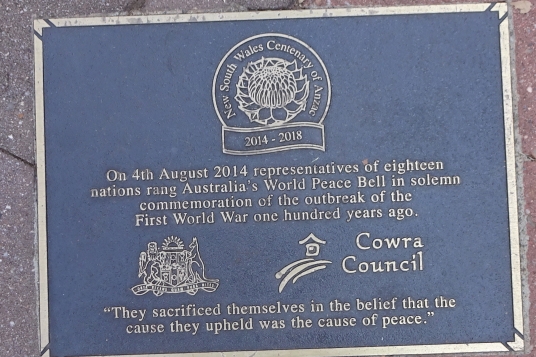 If you are unable to read the plaque – see below

On 4th August 2014 representatives of eighteen nations rang Australia’s World Peace Bell in solemn commemoration of the outbreak of the First World War one hundred years ago.

‘They sacrificed themselves in the belief that the cause they upheld was the cause of peace’.

For Whom the Bell Tolls
by
John Donne

No man is an island,
Entire of itself.
Each is a piece of the continent,
A part of the main.
If a clod be washed away by the sea,
Europe is the less.
As well as if a promontory were.
As well as if a manor of thine own
Or of thine friend’s were.
Each man’s death diminishes me,
For I am involved in mankind.
Therefore, send not to know
For whom the bell tolls,
It tolls for thee.