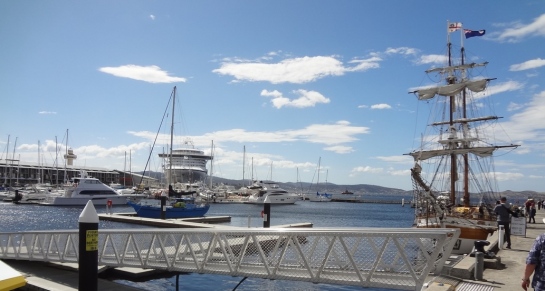 The old and the new – Golden Princess can be seen with a sailing ship along side. We berthed close to the town, which allowed for a short walk to many places of interest.

A touch of yesteryear where ever we looked. 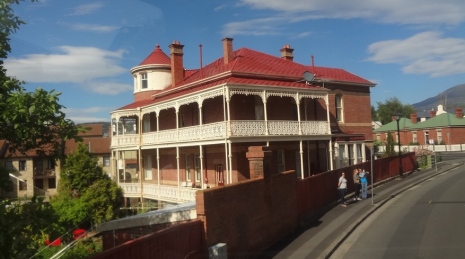 Many of the streets and homes reminded me of New Zealand, quiet and civilised.

We did a hop on hop off bus tour to get a feel of the place – with a population of just under 250,000, most streets were quiet. To be fair it was a Sunday. 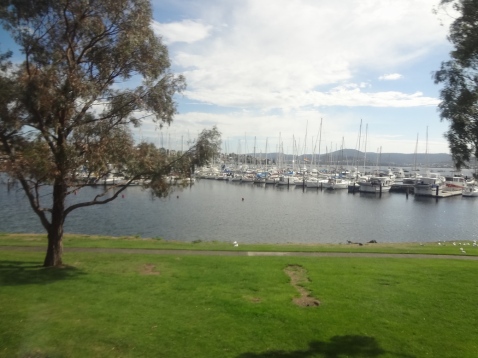 A blast from the past at the traffic lights.

You couldn’t fault the locals – they began brewing beer in 1824 and the same brewery is still brewing beer – Cascade Brewery, a well known drop that I drink in Sydney.

Back to the waterfront area – Flying Angel – Mission to Seafarers. When I was at sea in the 60’s it was called Mission to Seamen, but even the Mission has to be correct in today’s PC world.

Plenty of memorials around the harbour area.

This plaque was just a taste of what we would experience the following day at Port Arthur. (see my previous blog). 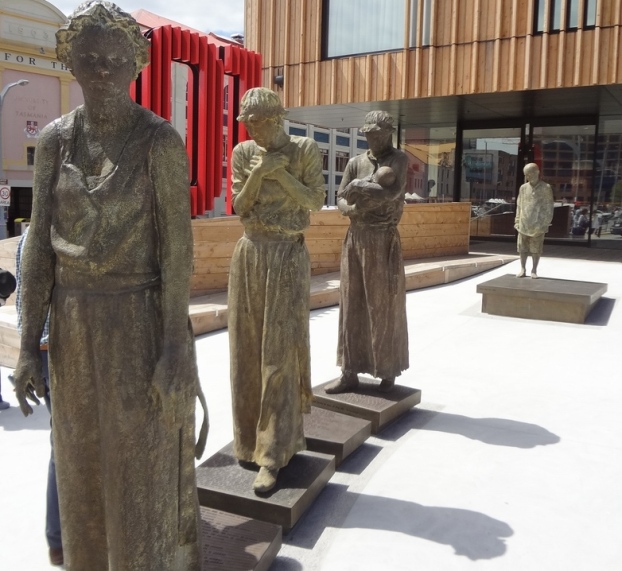 Statues near the ‘Footsteps’ plaque. 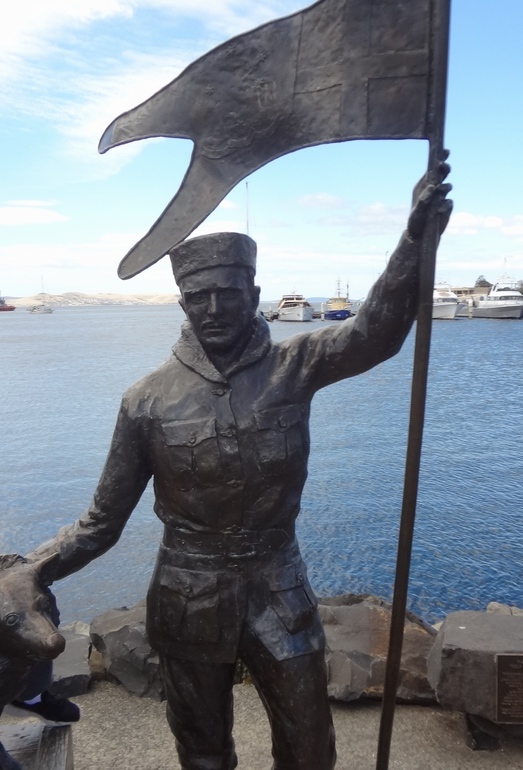 Louis Charles Bernacchi taking a self portrait with one of his dogs before leaving for the Antarctic. I cropped the picture from a photograph that I took, because it had a young boy in the picture, and I didn’t know him, and I could tell that he wasn’t going to move. 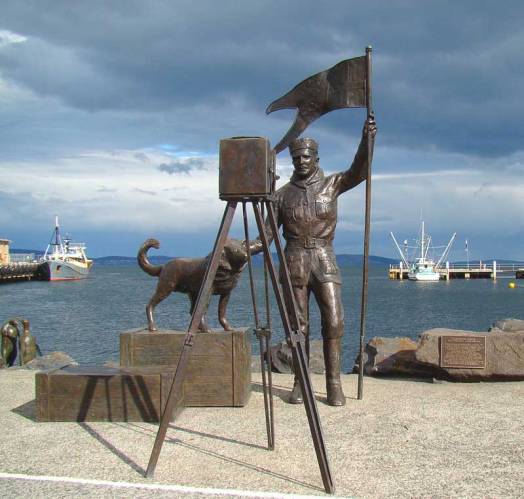 The above is from a Hobart travel site, which is the full picture that I wanted.

Louis Bernacchi with one of his dogs. I Found the picture on the internet.

He was Belgium by birth, and arrived in Australia when he was seven, and grew up in Australia.

Robert Scott was Bernacchi’s best man at his wedding, and Scott invited Bernacchi to join his ill-fated expedition to the South Pole – Bernacchi turned him down.

A few feet away from a great explorer we had a steam crane, built in 1899. Notice the boiler at the rear, which supplied the steam to drive the crane. 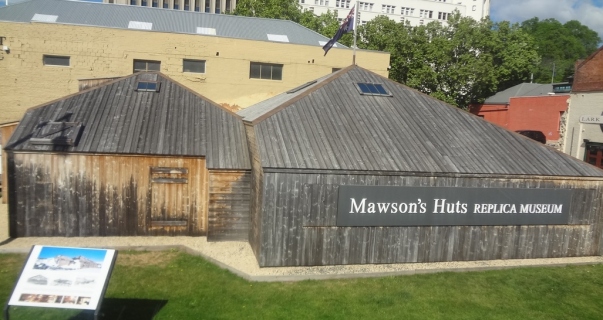 Check him out via the above link, particularly if you come from Yorkshire . . .

We missed the markets in Salamanca because they are held on Saturday. 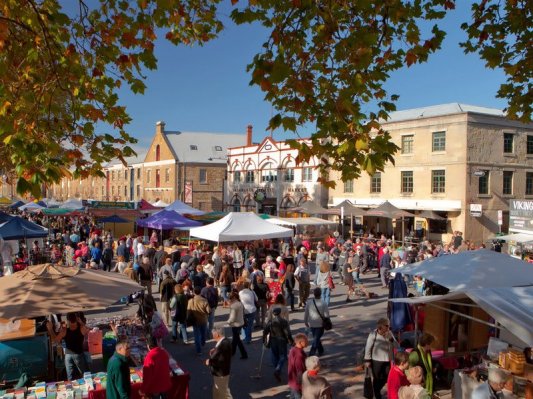 What we’d hoped to see, but we were a day late. Picture off Tasmanian tourist site.

The small bars and restaurants were doing a good trade.

The best time to go shopping – when most places are closed – think of the saving.

At the rear of the area when Maureen is standing. 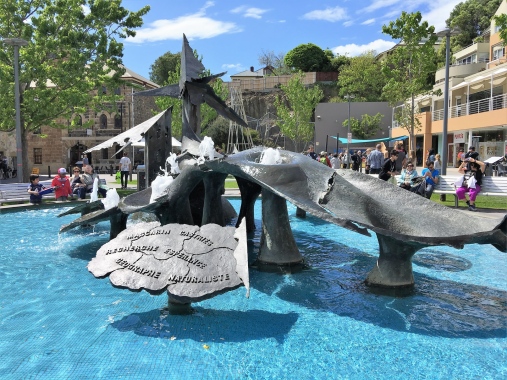 Close up thanks to V.I

Another blast from the past. 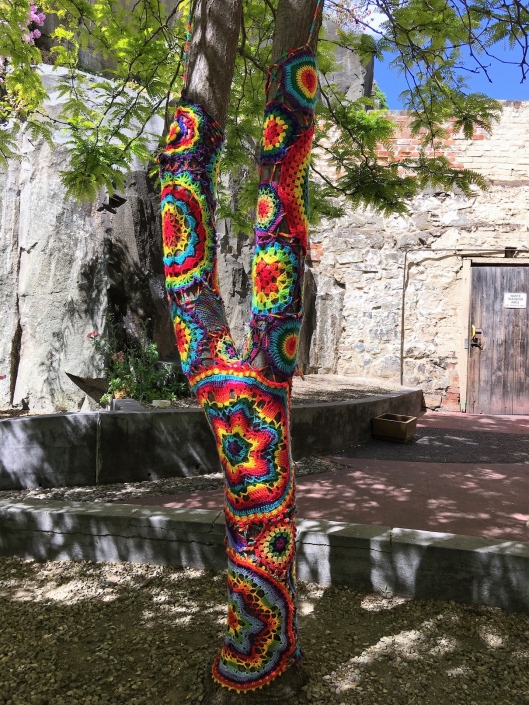 Wrapping your trees in a woollen jacket must be a Tasmanian thing . . . thanks V.I

On a positive note the Tasmanians have not forgotten their roots – note the Dutch flag for Abel Tasman. Picture from V.I.

Abel Tasman who started it all. (picture off the internet)