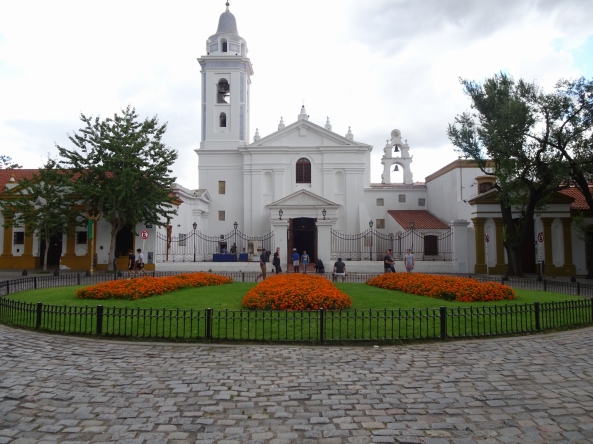 When 4780 vaults, containing the remains of people, becomes a tourist attraction, it can be hard to think of them as no longer alive.
Recleta Cemetery in Buenos Aires is such a place – the above photograph is the entrance to the cemetery. I’m not sure but I think the last person to be entombed here was in 2009.
The cemetery has been considered to be a National Historic Museum since 1946 – it is free to visit. The authorities did have tours, but they were in Spanish. 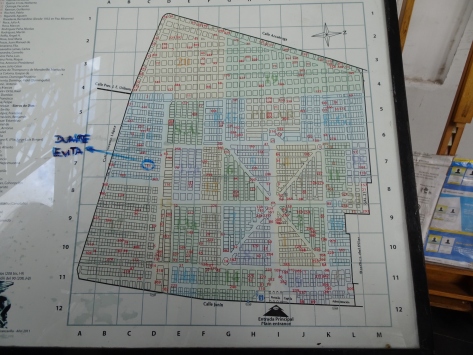 On entering we came across a large map of the graves and as you can see one is marked – the tomb of Evita. 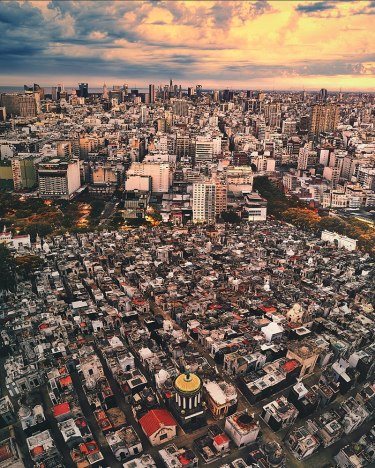 When you view the cemetery from the air it is hard to see the border between the living and the dead – such is life. 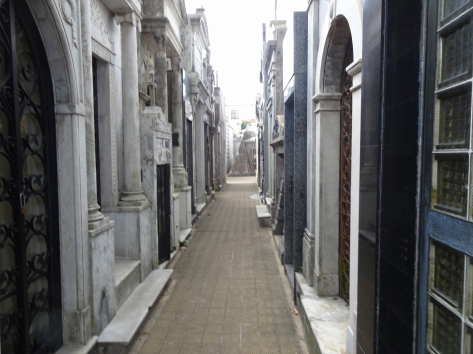 There are narrow streets, just as there are in life, 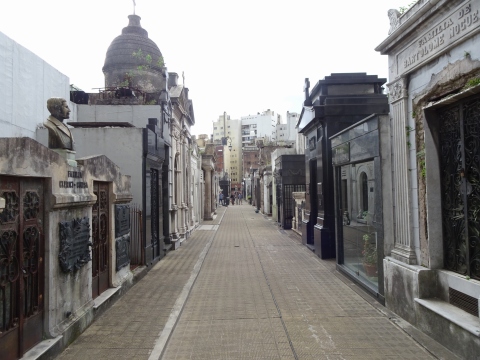 and there are wide boulevards – 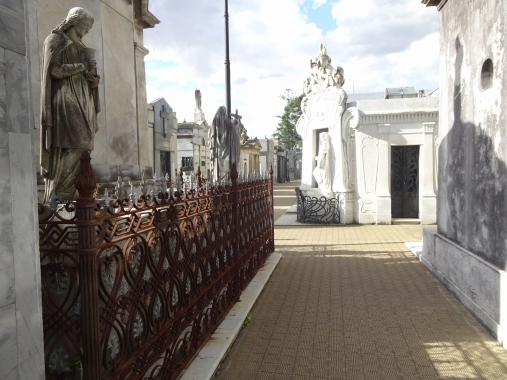 cross streets – so the small map that we were given on entering came in handy. 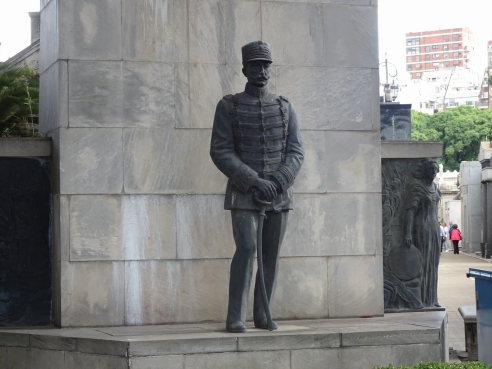 Where ever you turn you come across the tomb of someone famous – this is the tomb of General Eduardo Lonardi, who was the president of Argentina after the death of Juan Peron. 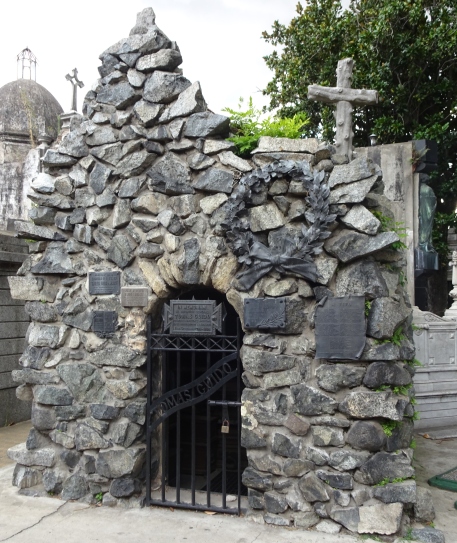 Remember in my previous blog I mentioned Tomas Guido (1788 – 1866) after  military service he moved in to politics and eventually became vice president of the Senate of the Argentine Confederation in 1857. When he died he was buried here. 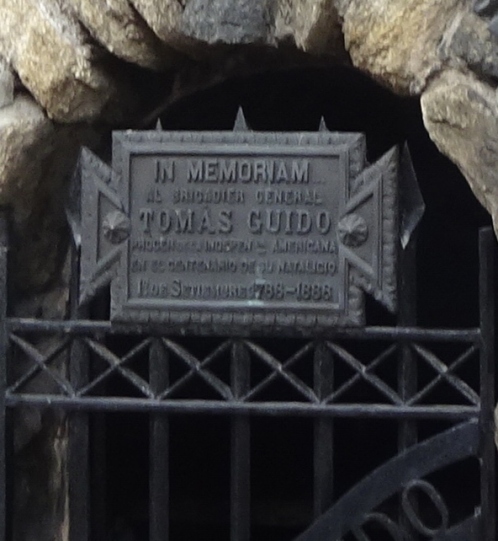 But the authorities thought that such an important personage should not be in the family crypt, but in the  Metropolitan Cathedral and guarded by soldiers. 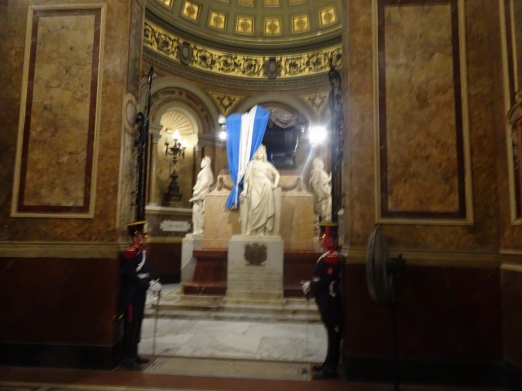 There were sad stories of ordinary people, such as Liliana Crociati, a young bride who was killed in an avalanche during her honeymoon, while skiing in Austria.
The family buried her here in her wedding gown, and they reproduced her bedroom and placed her statue at the entrance, and she can be seen stroking her favourite dog.

The golden glow of the dog’s nose is due to visitors stroking the dog – why I don’t know. 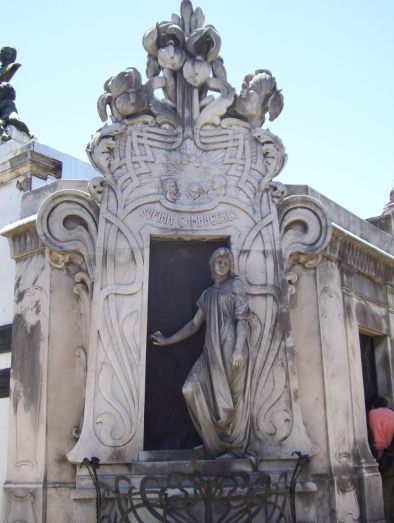 The tomb of Rufina Cambaceres is a tale of woe – she was eighteen and getting ready to go shopping with her mother when she collapsed. She was checked out by doctors and certified that she was dead, due to a heart attack.

She was placed in the family crypt in this cemetery – some days after, the funeral workers noticed that the coffin had been moved and the lid was broken. They feared grave robbers, so checked further and opened the coffin, only to find scratch marks on the underside of the lid, and Rufina Cambaceres’ hands and face showed bruising due to her trying to break out of the coffin.

Out of the corner of my eye I thought I saw Michael Caine’s tomb, but fortunately I was wrong.
Talking of death, Michael Caine did say that he was in so many movies that are on TV at 2.00 am that people think he is dead. . . . . 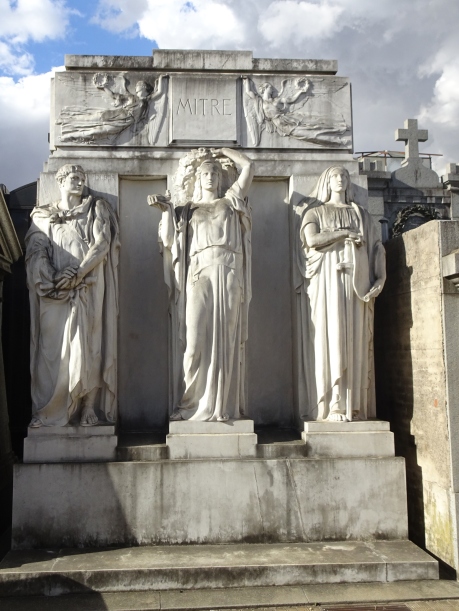 When I looked at this tomb, the name seemed strange until I realised it was Bartolome Mitre Martinez 1821 – 1906 who was President of Argentina from 1862 – 68.
He had quite a life, having been a solider, a journalist, he’d been exiled, became a colonel in the Uruguayan army, lived in Peru, Bolivia and Chile, all before he became President of Argentina. 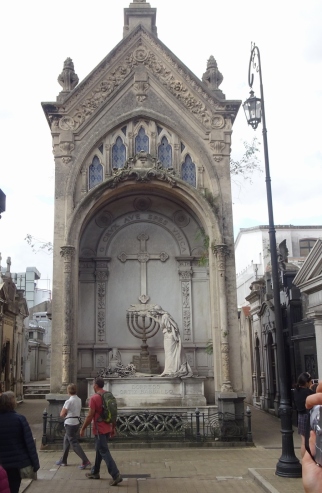 Some of the tombs were huge, as you see when compared to the adults. 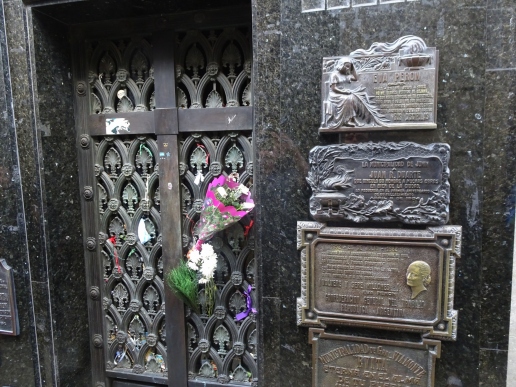 Of course the most ‘popular’ (if a tomb can be popular), was Eva Peron.
This is her family tomb. 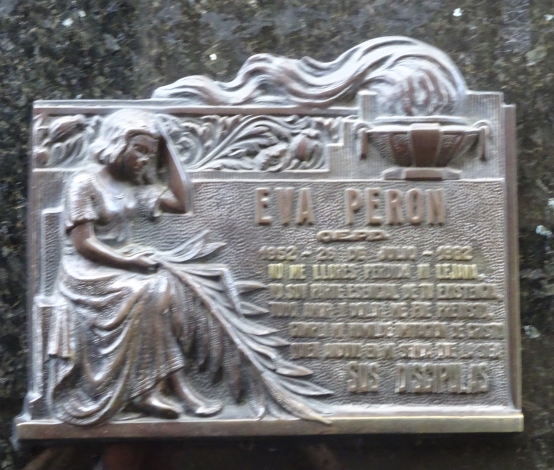 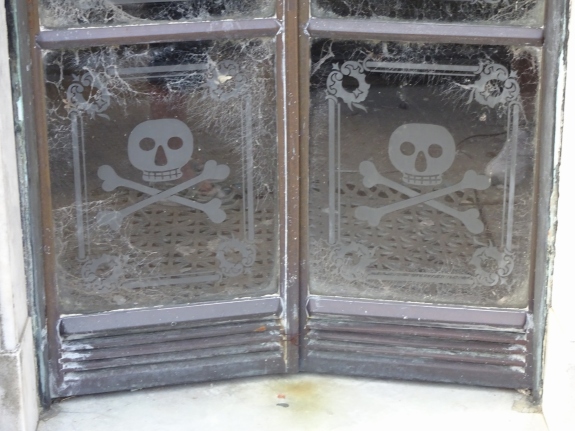 The doleful bell began to clang in the late afternoon, it was time to leave.

As we walked to the entrance area I noticed a tomb that needed a lot of TLC, which was a reminder that this life is only transitory.

Most visitors were respectful, although I did see a couple of tourists sitting on a stone edging of a mausoleum eating a take away meal – I wonder why they didn’t eat in the park outside, after all entry and exit to the cemetery was free.

I suppose in the PC world of today I bet my comment of eating while sitting on somebodies mausoleum will offended someone :- o)