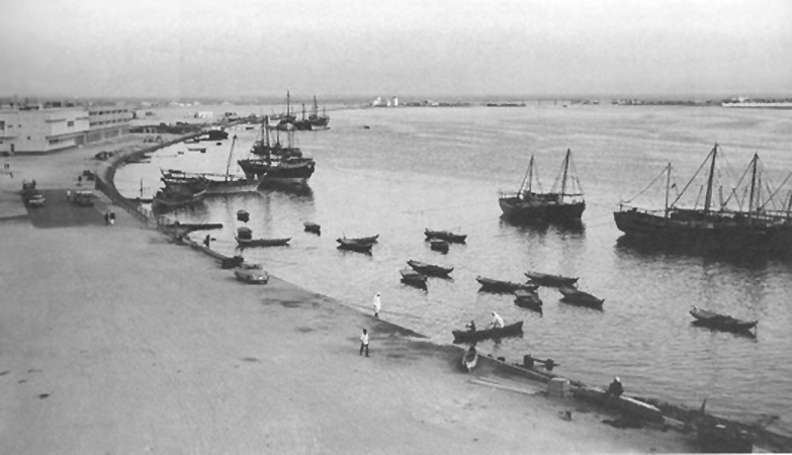 I wrote three months ago about out recent visit to Dubai, with air conditioned bus stops, very clean railways station and the largest shopping centre in the world.

The above photograph shows Dubai Creek flowing sluggishly towards the Persian Gulf in 1964 – I never dreamt that I would return as a tourist fifty two years later!

The Dubai of 1964, which was my first visit, was nothing like the Dubai of today. In 1964 cargo was unloaded in to dhows or barges, because they didn’t have the docking facility for ocean going vessels.
We went ashore in small dhows and walked up the beach or the bank of the Creek to get to the market. Our buying interest was for Japanese radios, record players, and Chinese toys which were made from tinplate with very sharp edges. I bought a mechanical cat requiring batteries to take home. I doubt that it would be allowed in to the country today – health and safety. The market and the town was always very hot and dusty.

The local Dubai market or Souk in 1964

To put things in context, in 1964 it was two years before oil was found, and a year before the airport runway was asphalted. Dubai was a trading port, and had been for hundreds of years, but what a leap of faith for the people to build for the day that the oil will run out. Currently I think only five present of the country’s revenue comes from oil, the remaining ninety five percent is mainly trading and tourism – i.e selling sun shine (and snow skiing, would you believe), to sun shy Europeans, particularly in the European winter.

I think that Dubai is a destination that is on many ‘bucket lists’. If you do visit Dubai try Emirates Airline, which has been voted the best airline in the world for 2016 by Skytrax based on fare paying passenger ratings. Unfortunately I haven’t flown with Emirates, yet.