Our next stop was Tallinn, which is the capital of Estonia.

Estonia’s flag is blue, black & white as you see in the photograph. The blue, black and white flag was consecrated by the members of the Estonian Students’ Society on the 4 June 1884.

Apparently there are a number of reason why they have such a flag, but the most popular is that the blue is a reflection of the sky and the lakes of the country. I’ve read that the black represents the black coats warn by Estonian men, but I have also read that it represents the oppression of foreign invaders, such as Russia, when she was known as the USSR, and Germany during the Nazi regime in the early 1940’s. The white is for the aspiration of the people for purity and light.

Tallinn is where we docked along with a number of other cruise ships, 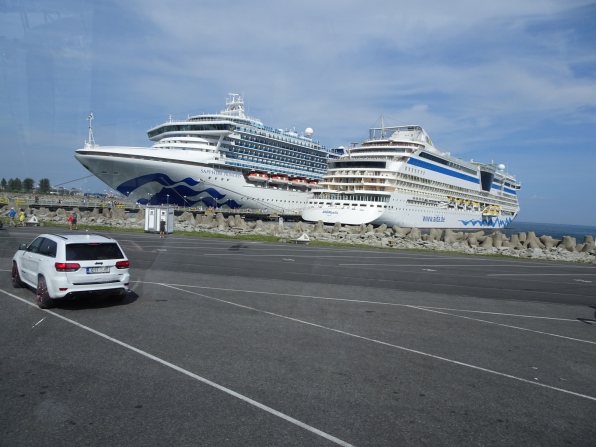 Sapphire Princess (on the left) – I think she has a ‘thing’ for Celebrity Silhouette, because she has followed us from Southampton.

The city and her port was a strategic location for trade between Russia & Sweden since the middle ages.

In 1651 the city was known as Reval and was a dominion of Sweden. During the great Northerner war between Sweden & Russia and her allies ( 1700-1721). Reval changed again after they surrendered to Russia in 1710, but managed to retain self -governing, and retained their economy and traditions.

During WW1 Germany over-ran Estonia as the Russian army retreated. In February 1918 Estonia issued a declaration of independence, which Germany did not recognise, but when Germany was defeated, she withdrew her troops from Estonia and handed over power to the Estonian Provisional Government. This when Reval became Tallinn.

Later in 1918 Bolshevik Russia invaded Estonia and a war of independence followed, with support for Estonia from Latvia, Finland, White Russians and the British. The Russian were defeated and Estonia was international recognised, and she joined the League of Nations.

Tallinn’s Old Town is one of the best Medieval cities in Europe and is now a UNESCO world heritage site. It is a place that Maureen and I would like to visit again and stay a few days.

I know it isn’t medieval, but we were on our way to the old town and the tram attracted me.

I was told about this building, but have now forgotten the details. The shape of the shirt in the brick work was unusual, which I why I clicked the camera. 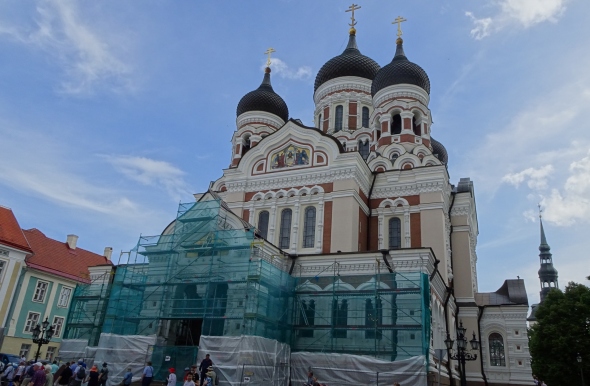 Alexander Nevsky Cathedral in the old town area. Opened in 1900 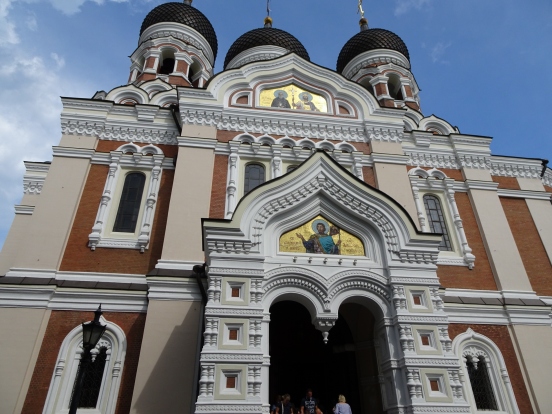 The other side – I did take a picture inside, but was asked not to take any more, which is why I don’t have any inside shots. It was a typical Russian Orthodox church with gold icons, ornamental displays and electric candles.

Tourist train in front of the Russian church.

I wonder what Estonian is for Thomas . . . the registration plate begins with TH . . .

Voldemar Panso memorial –
he was a producer, actor, teacher, drama critic 1920 – 1977. Unfortunately the picture is not clear enough to show the hand stretched out to those who listen and watch

This is a better image I obtained form the internet.

Estonia is in NATO & the EEC, the EEC flag is behind the flag on the left you can just see the stars. 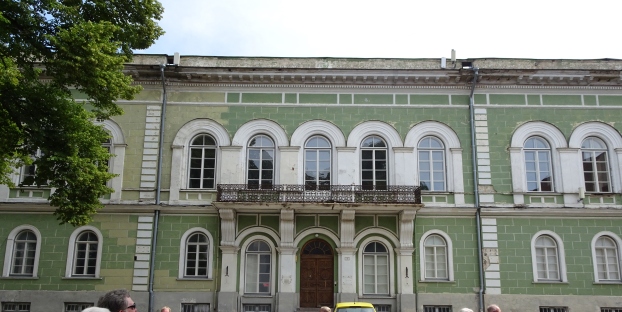 Pastel colours wherever I looked . 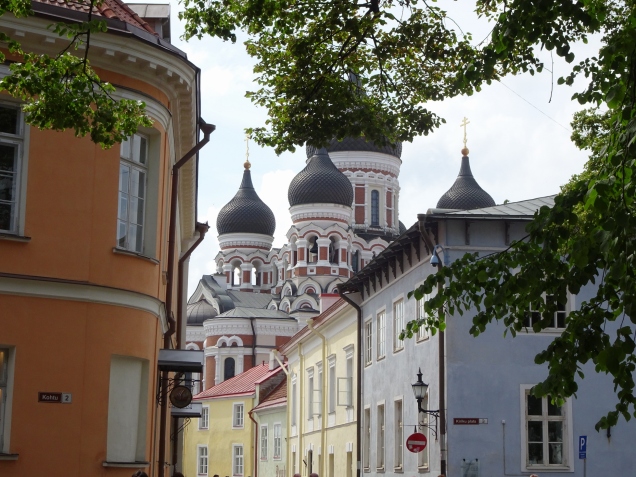 We walked around the old area of the heights, but were never very far from the Russian church.

There was always a street that I wanted to walk down, but the guide kept us together.

St Nicholas’ Church’s spire, and a view across the old town.

The church was originally built in the 13th century, but was bombed in WW2 by the Russians, and the fire destroyed most of the interior. It was restored after the war starting in 1953 and completed the work in 1981. Unfortunately in 1982 fire destroyed the tower. It was once again restored and turned in to a museum and concert hall in 1984. As a concert hall it very popular due to the acoustics. 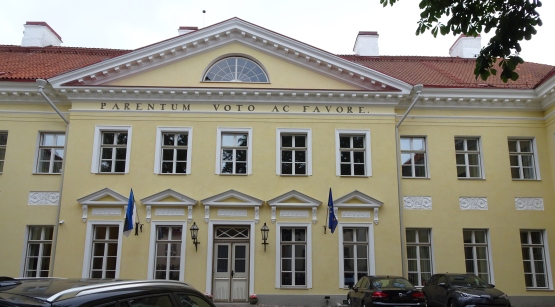 This building used to be the home and palace of a Swedish officer who moved from Sweden. The main house was built in 1809 and after restoration in 2003 it became the Office of the Chancellor of Justice of the Republic of Estonia.

The motto over the front means something like – with the good wishes and favour of family. 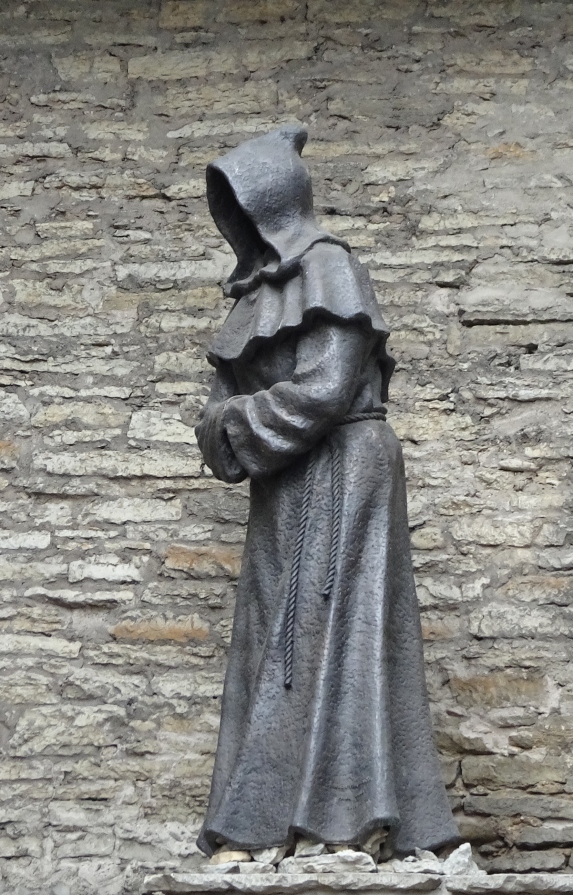 As we passed through the walls we met  . . . . . there are three of them and they are all faceless (bit like a government bureaucrat). They stand in the Danish King’s Garden, 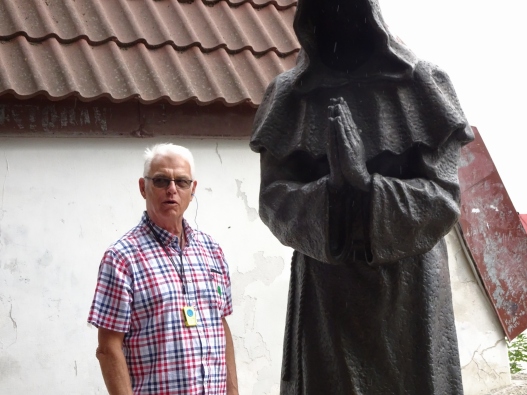 In my opinion they are not all that attractive, but what would I know of art . . . I’m six feet tall so it gives you an idea of how big the guy is on my left.

A passageway down to the lower area of the old city – it had just started to rain so the steps were slippy.

A short walk from the bottom of the steps and we were in the old town. 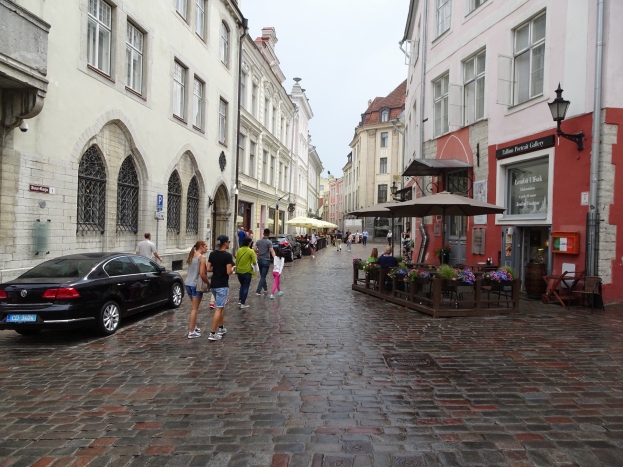 A town where you could spend hours just wandering around, or sitting in a cafe and watching the world pass you by.

More hidden alleyways. We did walk through this archway later but approached it from the other end. 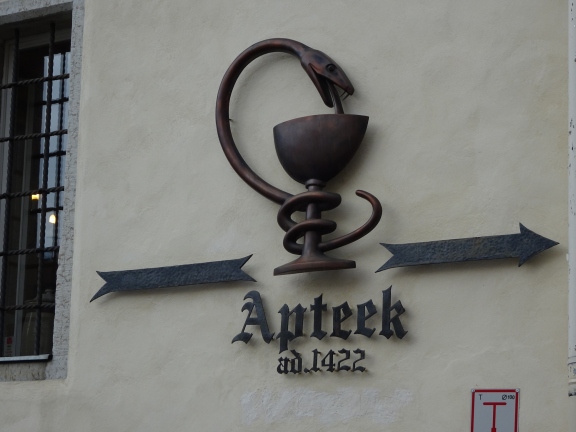 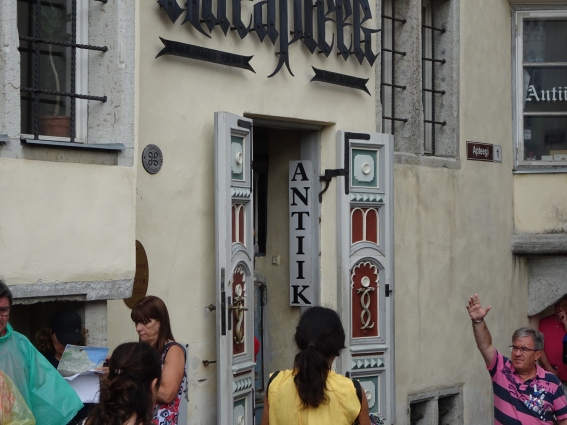 A few doors later we passed an EEC import –

I’ve read that is used to be Molly Malone’s.

Perhaps it is me, but why would I want to visit an Irish bar in Tallinn? I want to experience local drinks and ambiance . In Dublin I thoroughly enjoyed my time in the Irish pubs.

As well as being  seaport and encouraging tourism, Tallinn has also been called the ‘silicon valley’ of the Baltic by the New York Times. For those who use SKYPE you must thank the people of Tallinn, because this is where it originated. The city has now become one of Europe’s main IT centres, and the city is now twined with Los Gatos in California.

This bird wasn’t a bit frightened of us  . . .I must admit that for me, it is only in the UK that the cry of the seagull is so distinctive that it brings back childhood memories of the seaside.