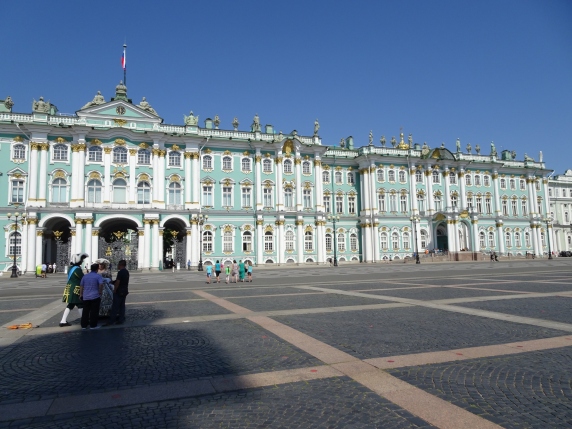 Being part of a group tour we didn’t have to queue to get in through the main door. I took the above after we came out, and the crowds were now inside.

The museum began in 1764 when Catherine the Great bought two hundred and twenty five paintings from a Berlin merchant. Among the paintings were  thirteen Rembrandt paintings and eleven of Ruben’s. Over her life she bought more and more artwork, and when she died in 1796 she had collected thousands of items, not just paintings, but books, drawings, jewelry, sculptures, coins and frescoes from the Vatican.

There are now three million items that can be seen, so if you spent one minute at each item it would take over five and a half years (without rest) to view them all. I was happy with two hours or so, and we only scratched the surface, figuratively speaking – we were not allowed to touch anything! 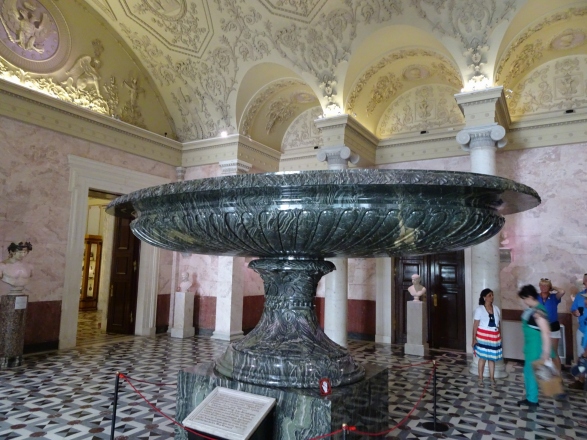 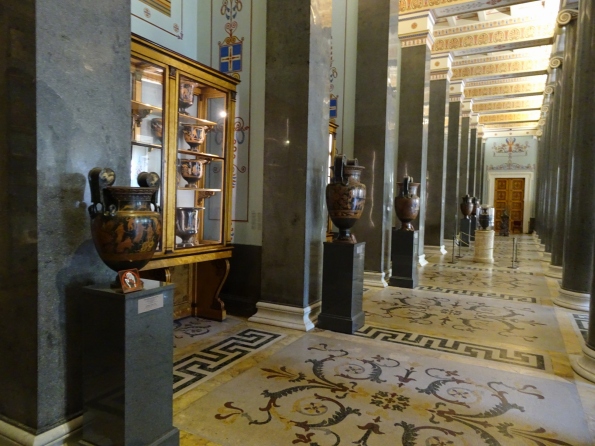 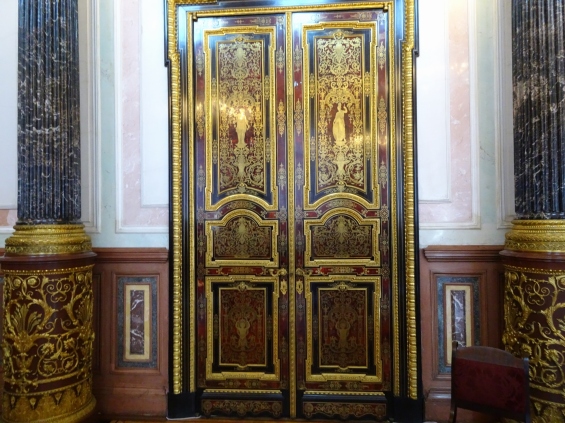 Gold doors- there seemed to be gold everywhere.

I took well over a hundred photographs, so I am just posting a few as an example of what you will see if you ever visit, but I suggest that you have a guide – the collection is vast. 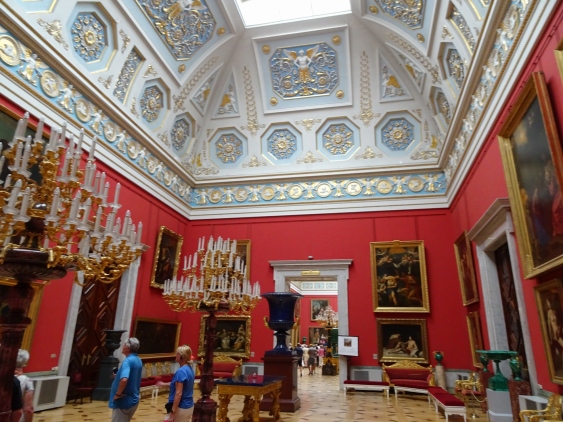 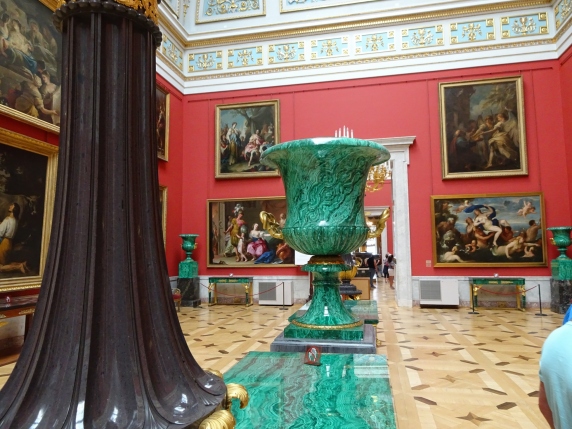 Malachite urn, and the table is also malachite.

There is a Malachi vase in Windsor Castle . It was presented to Queen Victoria in 1839 by Tsar Nicholas I. It used to be in the Hermitage.
There is a story that during the 1992 Windsor castle fire there was a green urn that weighed over two tonnes, and in addition was filled with water due to the firemen trying too put out the fire. It could not be moved and the firemen saved those items that they could.
The water protected the vase and when the fire caused the water to turn to steam the outer Malachi covering fell off. After the fire had been extinguished they were able to use the pieces to reconstruct the vase to its original condition. This reconstruction was one of the longest reconstruction works after the fire. 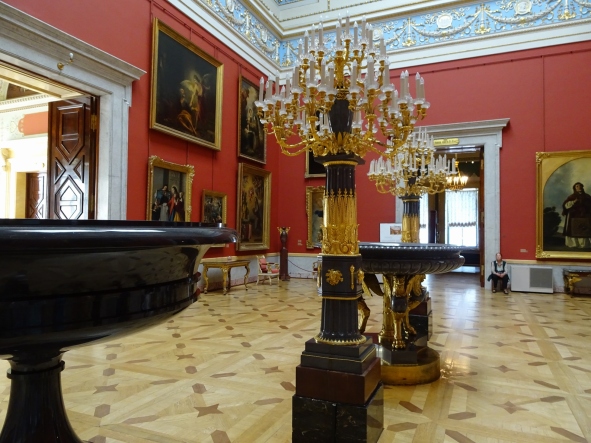 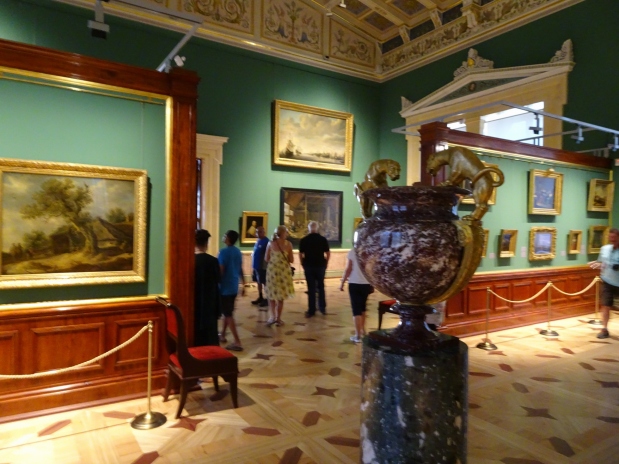 So many paintings, and the more famous artists had many admirers, so much so, it was difficult to take a photograph. 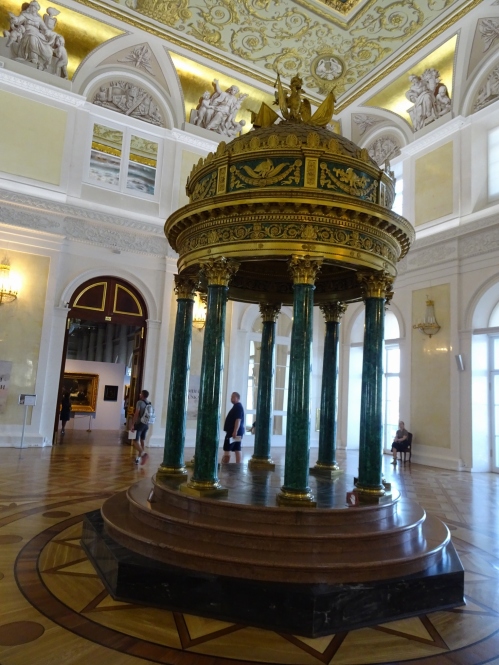 Kiosque (Kiosk) or pergola –
the poles are malachite. The original deposit of malachite was found in the Urals. 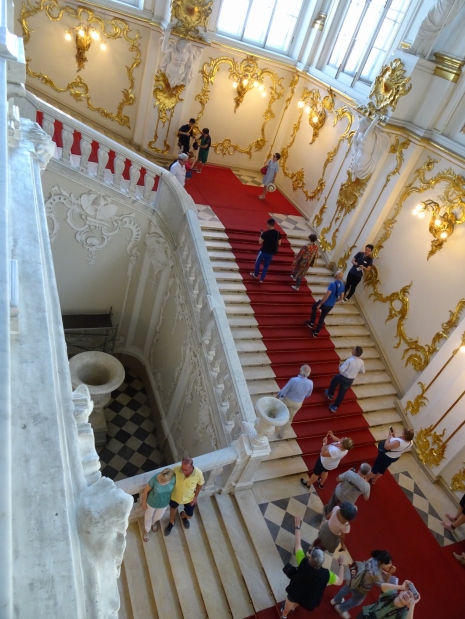 Jordan Staircase in the Winter Palace (which is now part of the Hermitage Museum).

The name of the staircase refers to the River Jordan, and the Epiphany. The Tsar would descend these stairs for the ‘blessing of the waters‘ of the River Neva, which was a commemorative celebration of the baptism of Jesus in the River Jordan.
In all, there are one hundred staircases in the Winter Palace alone, fortunately we only had to contend with about four. 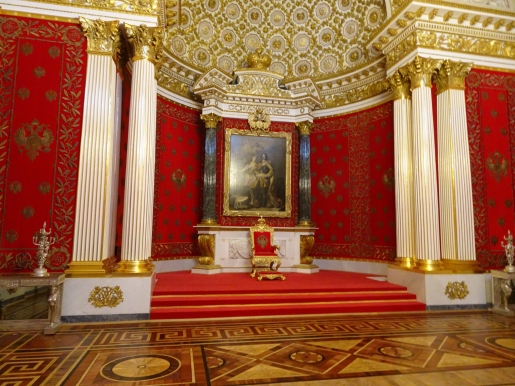 The Small Thrown Room –
diplomats would gather here on New Year’s Day to wish the Emperor well for the New Year. 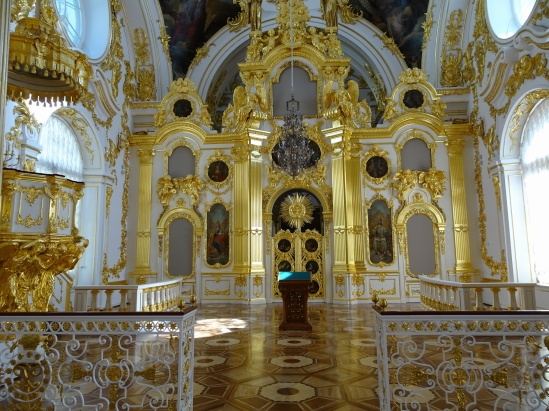 The Great Church of the Winter Palace. 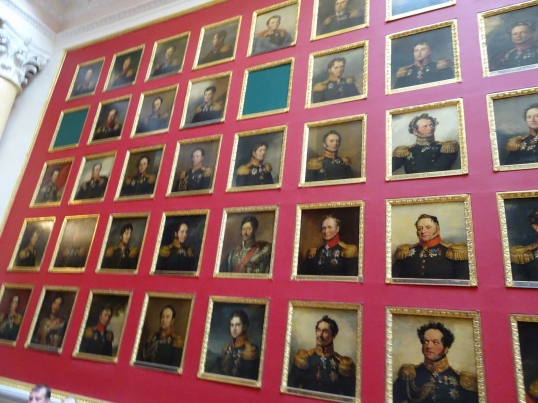 The Military Gallery in the Winter Palace.

There are 322 portraits of generals who took part in the Great patriotic War of 1812 against Napoleon. 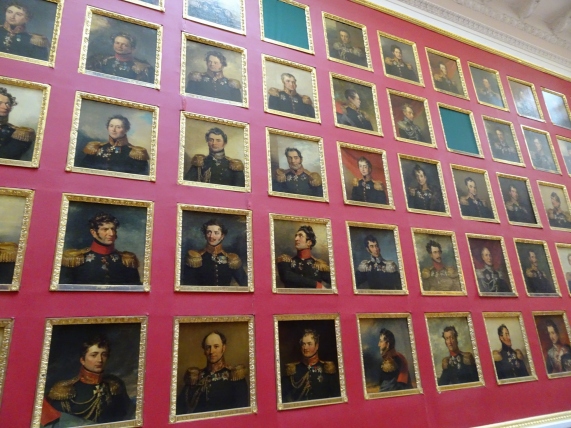 Of course I had to find my old mate Kutuzov (Battle of Borodino).

Our guide did make one concession by pointing out a portrait of the Duke of Wellington, that he ‘contributed’ to the fall of Napoleon. . . .
I bit my tongue . . . . . 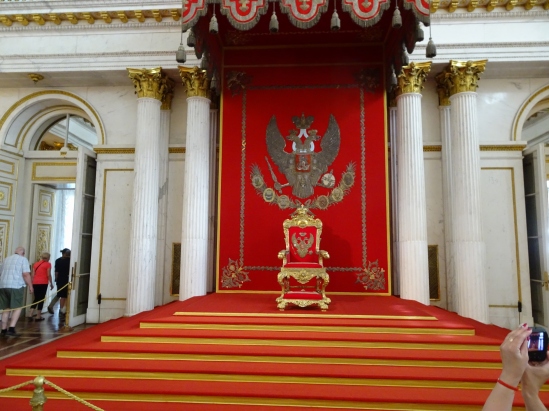 St George’s Hall, AKA The Great Thrown Room, – which was where the opening of the First State Duma (representatives of the people) took place by Tsar Nicholas II in 1906. 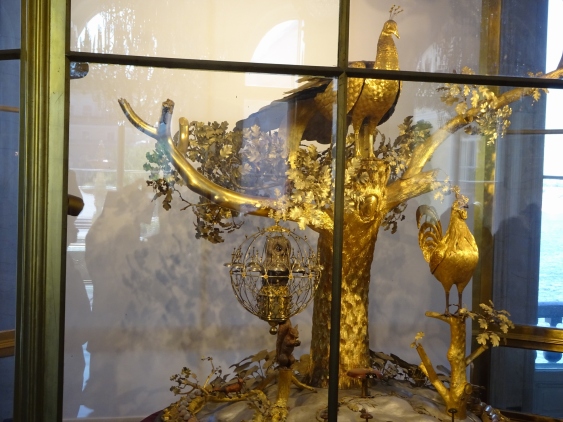 The Peacock Clock, which has three life sized mechanical birds, built by James Cox of London in the 1770’s. Today it only plays on a Wednesday.
Prince Grigory Potemkin bought it as a gift for the Empress Catherine II in 1781, 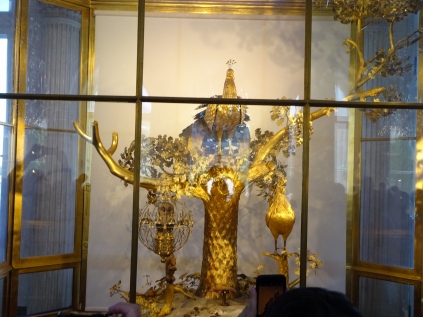 Peacock Clock click on the link for a more detailed explanation and see what happens at the ‘right time’ – the film is only three minutes long. 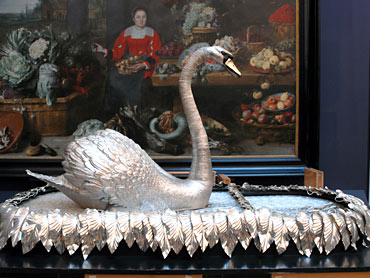 Thanks to friends of ours who live in the North East of England, I became aware of another James Cox’s mechanical item, which is much closer to ‘home’, if you live or are visiting the UK.

May I suggest that you pay a visit to The Bowes Museum at  Barnard Castle, Co Durham where you will find the Silver Swan, which dates from 1773.

The swan is life-size and is controlled by three separate clockwork mechanisms. The Silver Swan rests on a stream made of twisted glass rods interspersed with silver fish. When the mechanism is wound up, the glass rods rotate, the music begins, and the Swan twists its head to the left and right and appears to preen its back. It then appears to sight a fish in the water below and bends down to catch it, which it then swallows as the music stops and it resumes its upright position.

Usually you can see the Swan in action every afternoon at 2.00. This performance lasts approximately 40 seconds.
The above explanation has been copied from the museum’s web page.

After checking the details it appears that the original swan was 3 feet in diameter and 18 feet tall. It is thought that originally there was a waterfall behind the swan, which was stolen while the swan was on tour.

The swan was displayed at the Paris World’s Fair in 1867 where Mark Twain saw it and commented on it in his book,  Innocents Abroad.

Silver Swan  a short piece of film to show the swan moving, it lasts for forty seconds.

James Cox worked closely with John Joseph Merlin who was Cox’s chief mechanician – the name they gave such a person in those days. Merlin was good at promoting himself at balls, arriving in outlandish costumes etc- The Morning Post and Daily Advertiser of 4th March, 1778 described him as “Mr. Merlin, the mechanic”.
At one ball he arrived wearing roller skates, which he had just invented, and skated around the ballroom while playing the violin. The problem was that he had not yet worked out how to stop, and so crashed in to a mirror, worth £500, and destroyed it, and his violin. 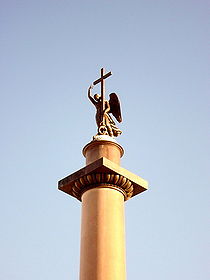 Back to the Hermitage – the above is the symbol on the top of Alexander’s Column, which is an angel holding a cross. 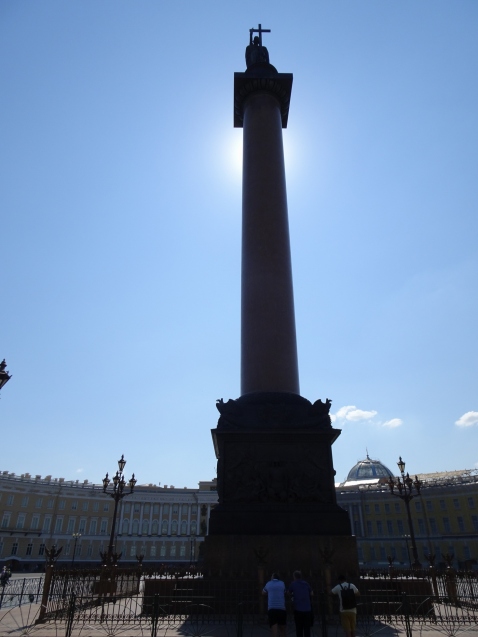 The column was erected in the Palace Square in front of the Winter Palace, now the Hermitage Museum – to celebrate  the Russian victory over Napoleon.
Built between 1830 – 1834 and designed by a Frenchman,  Auguste de Montferrand. . . . . who had served in Napoleon’s army, and had been awarded the Légion d’honneur.