I’d been out East for just over a year sailing in the waters of the Far East and down to Australia & New Zealand, and in the last month or so my sore throat had been getting worse.
Originally I thought it was a standard sore throat and that it would ‘go away’ in due course – it didn’t. Apparently I had a boil at the back of my throat, and I couldn’t swallow and the infection had spread to my teeth & ears

I saw a doctor in Singapore and he considered that I had a problem with my tonsils, and that I should have them out.
It seemed a good idea, until I asked a few more questions (Dr Google didn’t exist) and realised that I would be in hospital for a few days, as this type of operation for an adult is more serious than for a child.

I reported back on board as the mooring lines were singled up, and we were sailing, so the operation would not take place in Singapore.

Our next port of call was Calcutta, and through radio chatter I was offered hospitalisation in Calcutta to have the operation.
To be honest I didn’t fancy this at all, considering what I’d been told in Singapore about the seriousness of the operation, and having limited personal support if anything went wrong, so I refused, and the Company then offered to fly me to the UK!

I think it took me about a second and a half to think about this before I said YES!

I signed off the Bankura in Calcutta, in April 1967, and boarded BA 719 at Dum Dum Airport, which was the name of Calcutta’s air port at that time, now it is called Netaji Subhas Chandra Bose International Airport. The airport was renamed in 1995.

I am certain the aircraft was a B 707 (see the photograph at the top of the blog), rather than a VC 10, which were being phased out by BOAC around that time. Just on the off chance that I am wrong, the flight was BA 719, 20th April 1967, CCU to LHR, someone might have an old timetable. . .

The above picture from British Airways web site, gives you an idea of the difference between yesterday and today.
In 1967 we didn’t have headphones, nor TV screens, and we used to speak to our neighbour, or read a book (which is an old fashioned iPad). The airline would supply various magazines. What we were allowed to do was smoke, if we wished.
Once again I regret not collecting any frequent flyer points . . .

A telegram was sent to Maureen, and because she worked for BOAC in ticketing in the Liverpool office she was able to’see’ me coming via BOAC’s in-house computer system.

Maureen flew down from Liverpool to meet me at Heathrow, and we both returned to Liverpool by train.

It wasn’t the Silver Fox, unfortunately (excuse the pun).

The end of standard gauge schedule service for steam trains in the UK came about in August 1968. After that it was diesel or electric.
Today people speak of ‘high speed’ trains as if it is something new, but a ‘sister’ engine (the Mallard) of the above Silver Fox reached 126 miles (202 km) per hour in 1938 . . . .
The Mallard is now in the railway museum York.
If you are ‘in to’ steam trains click on this link to see what she looked like. Mallard was withdrawn from service in April 1963.

Of course once in Liverpool Maureen & I were keen to tell the family that it was now official, and that we were going to get married.
This required quite a number of trips to relatives on both sides to meet each others extended family.
I say ‘extended’ as if we had numerous brothers and sisters, but we are both only children, but there still appeared to be quite a few relatives and friends to visit and not just on Merseyside.

I also visited our family doctor to see how soon I could see a specialist, in the meantime I was on medication.

It was late April when I met with the doctor and the earliest appointment for the specialist was 06th June!
The Company was not happy, because I was due to return to the Far East in mid- May.

When I met with the specialist he told me that it would be three months before there would be an available bed in the local hospital. This would mean that I was unavailable until at least late September.

The Company were definitely not happy.

The specialist was aware of my circumstances, and suddenly a bed became available on the 13th June (lucky 13!).
I was admitted in to hospital as planned, and the operation was scheduled for the 15th June. 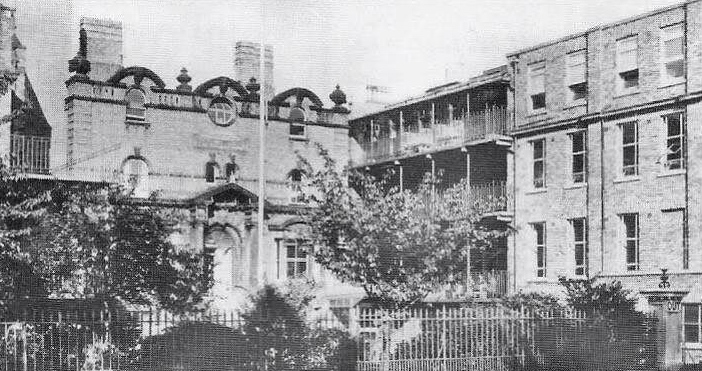 This is the hospital, Birkenhead General Hospital, which was built in 1862 . . perhaps Calcutta would have been better . . . the above hospital has since been demolished.

All went as planned, and I was in hospital for a week.

Early August and the expected telegram from the Company arrived. I was to fly to Bombay (more frequent flyer points missed), to join MV Pundua as third mate. 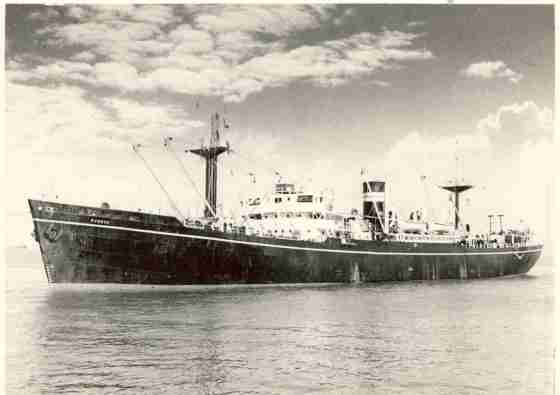 This time I flew Alitalia (known in the industry as Always Late In Transit And Late In Arrival), why the Company picked Alitalia instead of BOAC I don’t have any idea, other than they must have been cheaper.

The aircraft was leaving London at 7.30 pm so Maureen & I took the morning train to London, arriving later morning. It was not going to be

I was obliged to attend the Company’s head office to pick up my airline tickets. This visit at least gave Maureen and idea of the Company. 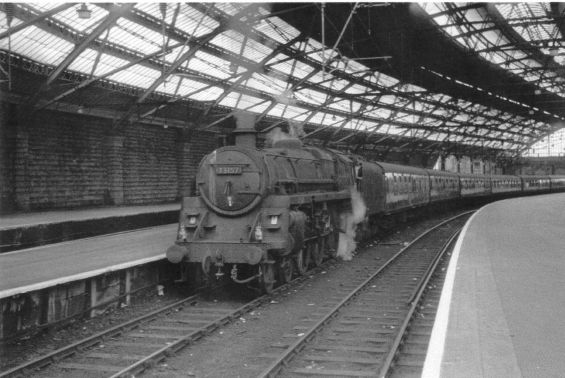 Lime Street station, Liverpool as it was in 1967 – the trip to London was just under three hours.

AZ 279 London to Rome – the aircraft is a Caravelle. The captain had two goes at taking off – first one aborted due to the radio failure, but after we returned to the bay it was fixed, and we took off an hour late.
The one thing that sticks in my mind during the transit time in Rome (late evening) was that all the shops were shut, as well as the bar . . . .

We arrived at in Santa Cruz airport, Bombay, at Noon the next day. The airport was originally RAF Santa Cruz, having been built in the 1930’s and was converted to civilian traffic after WW2 in 1946, and began to grow as such, after independence in 1947.

Once the aircraft door was opened the aroma of India flooded in, which brought back many memories. We climbed down the stairs and walked across to the terminal – this was before the aero-bridge with wheeled gangways, became common.

After immigration and customs I boarded the airport bus for the trip to the city terminus where I would be met by the agent.
The trip in to town was an experience, the whole area around the airport was what a westerner would call ‘slum like’, and the streets were packed with people and animals. It was a thirty minute sight seeing tour for me, because I was the only passenger. The driver only seemed to use the middle of the road so as to avoid the mass of people and animals.

The above is a recent photograph of how people live close to a motorway in today’s Bombay (Mumbai)  – when I arrived 52 years ago I saw similar slums near the airport, but I don’t remember any motorway – is that the only difference?

Once in the terminal I was met by the agent and told that the Pundua was due in to port in a few days. A rush across the world for nothing. . . .

I was taken to the Seaman Mission, which was also known as the Prince of Wales Seamen’s Club, because they offered accommodation and the agent had booked me a room. 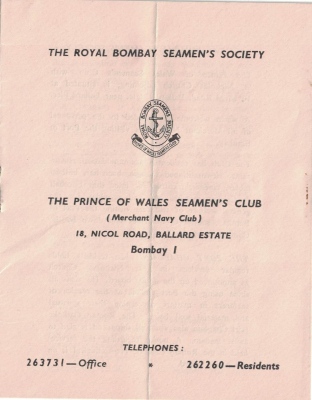 The Seaman’s Club above – the photograph is off the internet

The problem was that I’d been booked in to a room that was already occupied by another British India officer – an engineer – it was sharing time.

The layout of the room was something like the above picture, which is a recent photograph  – of course we didn’t have a TV in our room then, but they did have a good free library.
TV in India only began daily broadcasting in 1965, so I doubt that the Seamen’s building had a TV at all, never mind in a guest room.

The current occupant had already been in residence for five weeks waiting for a ship.

There were quite a few BI officers waiting for various ships and we soon got on well together. Bombay was the capital of Maharashtra State and that State was ‘dry’.

In the later afternoon I entered the bar of the Club to see people drinking beer, so I asked the barman for a cold beer.
‘Chitty, Sahib’
On the ship one didn’t use money, but signed a chit for a case of beer or a carton of cigarettes, the books were balanced at the end of the voyage.
‘Chitty?’ I asked.
‘From the police, Sahib’
At this point a fellow officer took pity on the new boy and explained the system. I had to report to the police and fill in a form stating that I was an alcoholic, and I would be given a chit allowing me to buy a limited number of beers at the Officers’ Club.

Maharashtra State, in which Bombay was located, was a ‘dry’ State! (It isn’t now). So it was pure panic to get to the police station before the senior officer went home for the night. I managed it! I wonder if I am still listed as an alcoholic in this part of India.
The cost of a large bottle of beer (bigger than the UK bottles at that time) was 5/6d (£4.95 in today’s money).

It was forbidden to take alcohol in to the Club. It was available if one knew where to go. 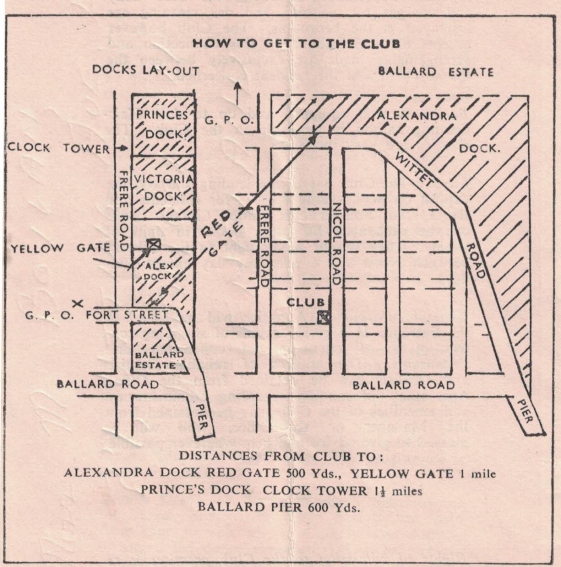 As you see the Club was quite close to the docks.

I’d arrived in Bombay on the 18th August and expected to be staying in the Club for a day or so, but it ended up as eleven days (my stay was much better then my room companion, who was in to his sixth week).

To help pass the time we visited ships of the Company that regularly called at Bombay, and surprisingly I met quite a few old friends with whom I’d sailed with over the years.

We also managed to obtain passes to Breach Candy Club. 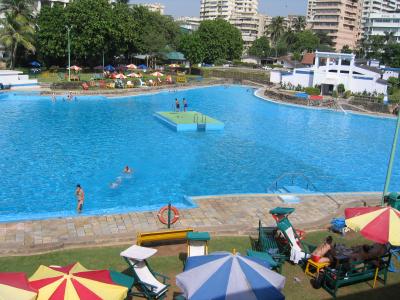 It hasn’t changed all that much since my last visit – a beautiful spot right on the ocean. I think it was opened to the locals in the 1960’s previously it had been Europeans only. It was built by the British in 1926.
During WW2 my father visited India (he was in the Royal Navy) and he used to tell me about Breach Candy, so it was a nice feeling for me to visit the same places as Dad.

I eventually joined the Pundua on the 29th August