After a four month voyage in MV Chilka to East Africa, I was allowed ten days leave before the telegram arrived that I as to join MS Dunera in Venice.

Three days later I flew with Alitalia from London to Venice, via Milan.

Fortunately, ALITALIA didn’t live up to her acronym Always Late In Transit and Late In Arriving – we arrived on time, and I was met by the Company’s agent and taken to Dunera – she was moored alongside St Mark’s Square.

Large passenger vessels are no longer allowed to berth alongside St Mark’s Square.

The above shows MSC Fantasia, at 137,936 gt, with 3,300 passengers –
MS Dunera was 12,620 gt with 834 students, in dormitories, and 194 first class cabins.
Is it any wonder the authorities put a stop to large cruise ships berthing alongside St Mark’s Square.
I think that berthing at St Mark’s Square was stopped in 2014, when the new cruise terminal opened. Now they are talking of banning large vessels in the Venice lagoon altogether, because of the vessel’s wash, even when moving very slowly, is causing damage to the buildings.

MS Dunera was a troop ship for the British Government, having been launched in 1937. She trooped to the Middle East, South Africa, Singapore and Australia between 1939 and 1941. In 1942 she took part in the Madagascar landings during Operation Ironbark, which has a link to me. During this operation my father was involved in the landings as a sailor aboard another Company troop ship named Karanja. It was only many years later that I found out about this long link of six degrees of separation.
MS Dunera was also the headquarter vessel for the US 7th Army during the invasion of Southern France in April 1944.

HMT Dunera, as a troop ship.

In 1961/2 the British Government decided to suspend all sea going trooping and only to use air, which left several troop ships unemployed.

B.I.S.N.C had experienced operating school ships in the 1930’s, so they thought that they would reintroduce the concept in the early 60’s, and convert their troop ships to becoming ‘school ships’ – ships that specialised in taking school children on educational cruises.
In its first year as a school ship, Dunera carried over 10,000 school children around Europe to famous historical sites.

Once I’d stowed my gear in a cabin that I shared with three other cadets, I spent some time familiarising myself with the ship.

We sailed the following evening with a full compliment of British school children who had been flown out by chartered aircraft from the UK.

Our first day at sea was instructing the students about lifeboat drill, and how to put on a life jacket, which were different, but similar to today’s jackets. The main purpose in the ’60’s was to force ones head above water,. The current jackets do the same thing, but in a more ‘friendly’ fashion.

Just a  little bit of trivia – the first life jacket was created in 1854 by Captain Ward who was  a British Royal National Life Boat inspector. He created it so that his lifeboat crews would have a better chance of surviving, considering that most of the time they only put to sea in bad weather, to rescue crews of stranded vessels.

The next job for the cadets was not as pleasant as chatting to the passengers and showing  them how to wear a life jacket – it was to chlorinate the swimming pool, before it could be used.

Picture thanks to John Coulthard, who also sailed in MS Dunera as Staff Second Officer in 1965. He joined MS Dunera the day I left.
As you see the pool was nothing like the fancy pools on offer by today’s cruise ships. I never heard of any complaints though, particularly when it was hot.

Our first port of call was Corfu – the photograph below was taken in 1965.

MS Dunera anchored off Corfu, or Keykyra in Greek.

The island didn’t have the facilities even for such a small (in comparison to today), cruise ships, so we anchored off and the motorised lifeboats were lowered, and it was the cadets job of coxing a lifeboat each full of passengers, and take them ashore. There was a small pier that we used to discharge the passengers safely. The ferrying began at 9.30 am and it wasn’t long before all of the passengers were ashore. 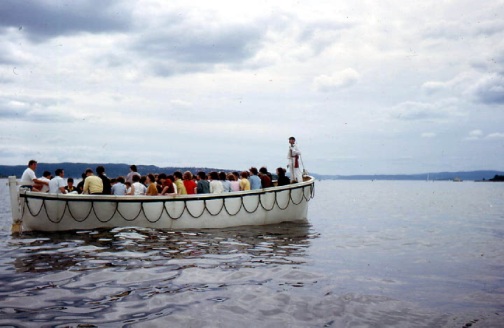 Once again I am indebted to John Coulthard for the above two photographs.

As you see the ‘tender’ boat, (lifeboat) taking passengers ashore was nothing like the tender boat (lifeboat) of today, see below during our cruise earlier this year.

At each port that we visited coaches were waiting for the students, with an English speaking guide, and the students were shown around the main sites, and had talks on the history and culture of each place visited.
The students knew that they had to pay attention, because they had essays to write, either during ‘lesson’ time on-board, or when they returned to their schools.
The big plus for the cadets was that we could board one of the coaches and visit the location for free. I took advantage of this facility in each port, because I knew I wouldn’t pay to return.
I was wrong, because fifty years later in 2015, I did return to some of the places that I’d visited while in Dunera.

When ever we took advantage of the free tour we had to make sure we were back in time to man the lifeboats for the return trip to the ship. The return trips in Corfu began at 3.30 pm the last boat from the shore was 5.45 pm and we sailed at 6.00 pm, for Itea.

Itea and once again the passengers were ferried ashore.
Today they have a jetty that can take larger cruise ships. 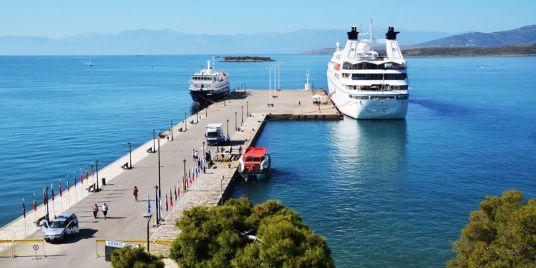 Both of the above were found on the internet – royalty free.