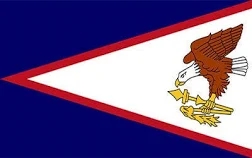 American Samoa is the only area south of the Equator controlled by the USA, not counting the Antarctic.
The above is the flag of American Samoa and Pag Pago (pro Pango Pango) is the capital, which is located on the island of Tutuila.

The US had been interested in this part of Samoa from as early as 1839 and when Germany & Great Britain were expanding their influence in the Pacific the US  wanted to block Germany who had taken control of W. Samoa in 1899.

In 1871 the US signed a treaty with the local chieftain for an exclusive use of the harbour, which was one of the deepest in the Pacific. The US wanted to create a coaling station for their steamers. It was also in an area of one of the best whaling areas in the world.

In April 1900 the US flag was raised over Tutuila, which is the name of the island, to stop Germany from expanding their influence, because they had already claimed W. Samoa.

My visit to American Samoa was in 1987, which had been arranged by our W. Samoa agent because TNT Skypak wanted an agency in Pago Pago. 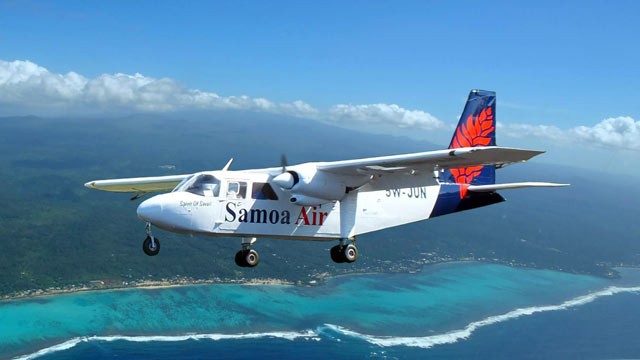 We flew to American Samoa from Western Samoa, at that time Samoa was called Western Samoa, the name did not change until 1997 when the country became just Samoa.

Some of the passengers on our flight were weighed before being allowed to board, and some of us were not.
As you see the aircraft was small, so every kilo was counted and the Western Samoans are known for their size.
The flight from Apia to Pago Pago was not long, about forty-five minutes, but it was still an international flight. Our baggage was stowed behind the last passenger.
We flew at our maximum height, which was 4,500 feet (about 1370 mtrs) above sea level, and there is a lot of sea to be seen in that 45 minutes.

Our Samoan agent and I acted as OBCs (on board couriers) carrying documents from Australia, New Zealand and Samoa. Our new man in Pago Pago was an accountant who already had three businesses as well as being a public accountant, so he now had to learn the international courier industry jargon, because we were carrying his first consignments.

We landed at Tafuna Airport (airline code PPG), which is about seven miles (11 km) from the city.
The road to the city wound round the base of the mountain, which only allowed one lane of traffic in each direction. The road was very crowded and narrow so trying to pass the vehicle in front was not recommended. The journey took us over half an hour and the humidity was off the scale, plus the vehicle was not air-conditioned so within minutes of leaving the airport we were dripping with perspiration.
My first impression of American Samoa was not positive due to the very poor maintenance of such an important road between the airport and the city.
In 1987 the population of Tutuila Island was about 36,000. 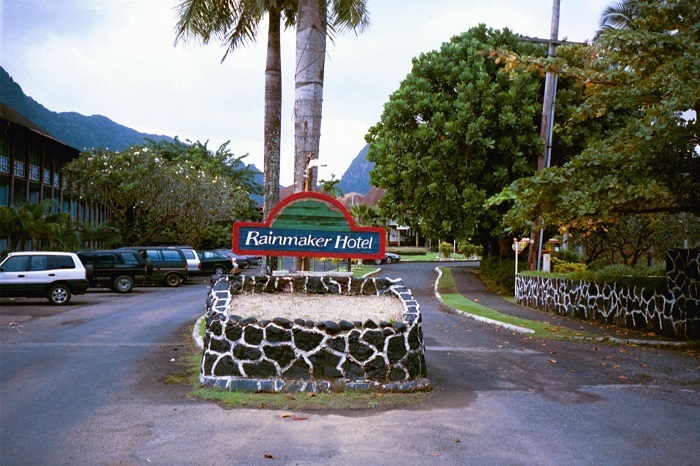 The hotel that our Samoan agent had booked looked very inviting, the Rainmaker Hotel, which used to be called the Pacific’s Intercontinental Hotel.

The above is from an early advert for the hotel – it was not as attractive when I visited, but it was the only hotel on the island!

The hotel began life in 1965 and was refurbished after a US fighter plane crashed into it in 1980. The accident cost the lives of six servicemen and two tourists.

A shot of the hotel when closed.

After a nice cold shower, I was given a tour of the town by our new agent. It was interesting, but my over whelming memory is the smell of fish. It did not matter where you were I could smell fish. Pago Pago housed the fourth largest tuna processing works in the world.
The canning of fish and pet food, with the processing of fish bones and skin into fish meal did not help the atmosphere of the island.

In 1946 Pan American Airlines started a service from the US to Sydney via Pago Pago using a DC4. 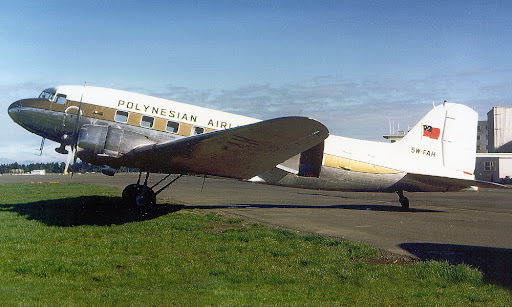 In 1959 Polynesian Airlines (Apia based) began a service between W. Samoa and American Samoa using a DC3.

This is how the rich and famous arrived at Aggie Grey’s Hotel in Apia.

Once again, even though the fish smell was strong I still found joy visiting places that I had read about, so of course I had to follow in Somerset Maugham’s footsteps as I had read Rain, which he wrote while in American Samoa. 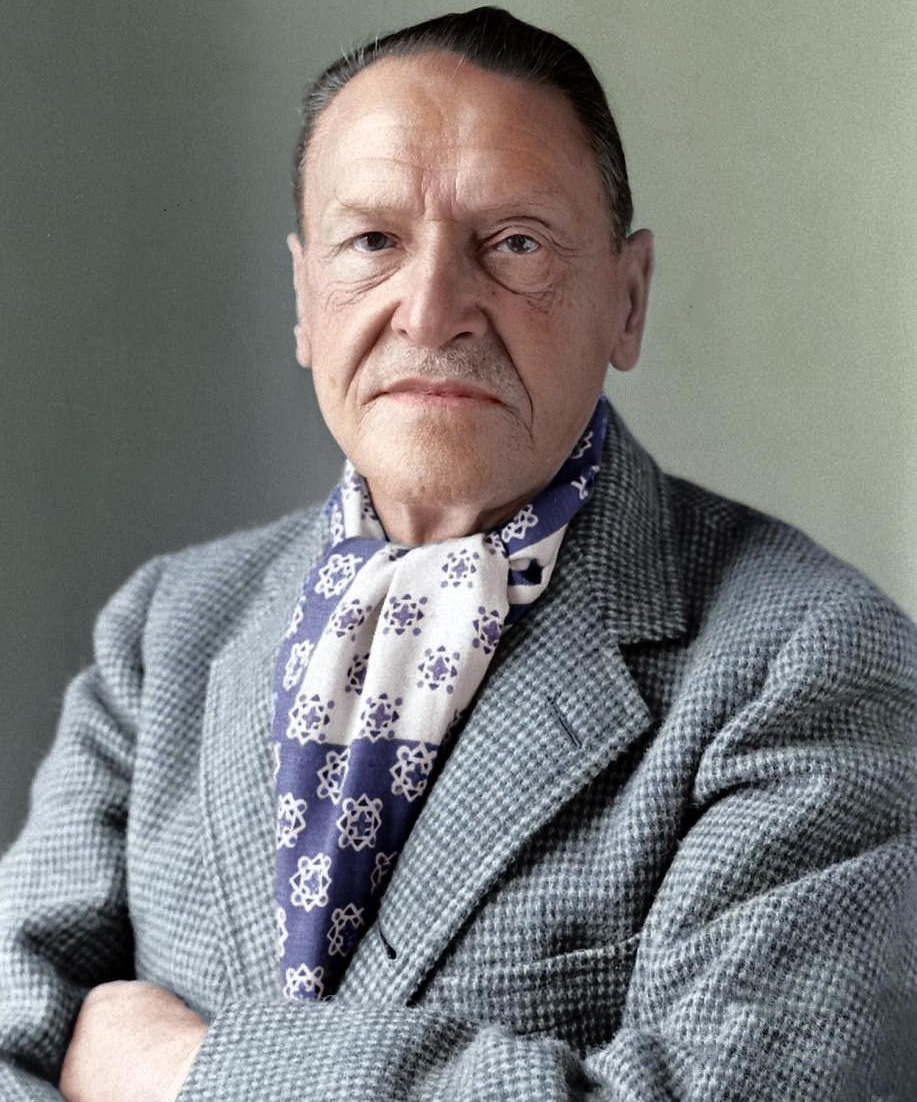 Somerset Maugham was visiting the Pacific Islands in 1916. His ship Sonoma arrived in Pago Pago where he left the ship and took up residence in a guesthouse. 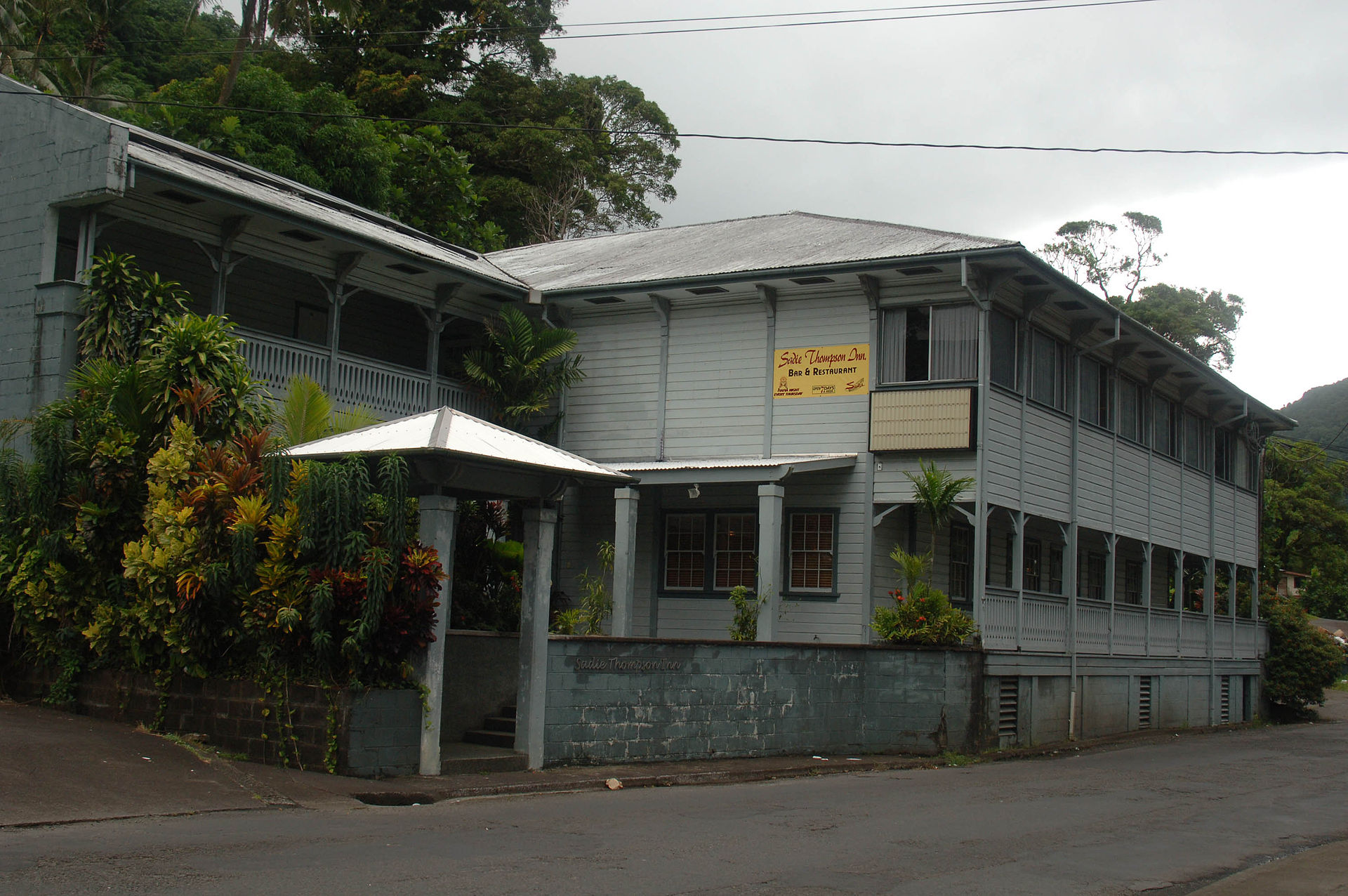 This is the guest house were Somerset Maughan and his companion stayed for six weeks while he wrote the outline of a short story called Miss Thompson.

He used some of the passengers on the Sonoma as models for character in his story. There was a single lady travelling on her own, who became Miss Sadie Thompson in Maughan’s book.

Sometime later when he was finalising his story from notes, while staying at a Hollywood hotel, he met an American playwright who was roaming around the hotel one night because he could not sleep. His name was John Colton and Maugham thought he would offer his new story to Colton to read, and perhaps it would help him to sleep.

The following morning Colton wanted to buy the story and turn it in to a play. Somerset Maugham agreed, but Colton did not have enough money to buy the rights, so Maughan offered his hand and said we split any profits 50 – 50 and John Colton agreed.

While in America Somerset Maughan was also trying to find someone to buy his story. A magazine called The Smart Set bought the story.

It was published in 1921, which opened a new avenue for Maughan’s work.

Later when Miss Thompson was to be included in a book of Somerset Maughan’s short stories the title was changed to Rain.

In 1928 it was made into a silent film with Gloria Swanson in the lead part. 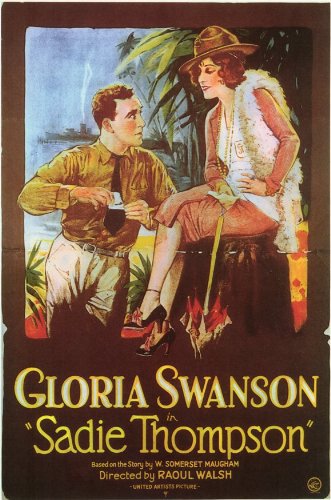 In 1932 it was Joan Crawford who had the lead part in a film called ‘Rain’.

Later it was June Havoc

and in 1953 Miss Sadie Thompson was played by

Click on the link for a little bit of the film and Rita Hayworth singing . . or you might give a round of applause to Jo Ann Geer, who did all of Rita Hayworth’s singing. 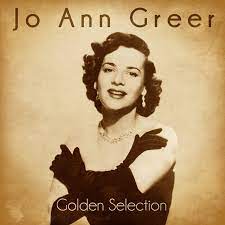 The guesthouse (now renamed) where Somerset Maughan stayed in 1916 has become so famous that they have a sign outside.

On the first picture of the guest house, you will see a yellow sign, I cropped it out for clarity.

Now back to the Rainmaker Hotel – and the surrounds – the ‘mountain’ that dominates Pag Pago is the cause of the high amount of rain that drenches the town, so even though the mountain is called Mt Pioa it is more commonly known as the Rainmaker Mountain, hence the name of the hotel.
Pago Pago harbour has the highest rainfall of any harbour in the world.

The Rainmaker Hotel had 250 rooms and was THE place to stay, with famous guests such as Marlon Brando, William Holden etc who were on their way to Aggie Grey’s in Apia.

The Rainmaker Hotel fell into disrepair and became derelict, and was demolished in 2015

Sadie’s by the Sea flourishes

I wonder what Somerset Maughan would have thought of Sadie’s today,
but sex sells, because Sadie Thomason was a deported prostitute from Hawaii, which is why she was on the Sonoma.