My next stop was to visit our agent in Apia, Western Samoa.

Western Samoa consists of two main islands and several smaller islands.
The island called Upolu is the main island where the capital Apia is located and Faleolo airport and the airline code for this airport is APW, if you plan to visit.

The distance from Faleolo airport to Apia is about 40 km (25 miles) and the trip took about 40 minutes.

Our agent was the Union Maritime Services and the agency generated about six or more courier shipments a day, which for a trading company on a small island was a lot – our agent was also the agent for cruise companies, bus tours and other shipping agencies, so generating outbound courier traffic was not a problem.

Our agent booked me in to Aggie Grey’s Hotel, which was a joy for me having read about this lady. 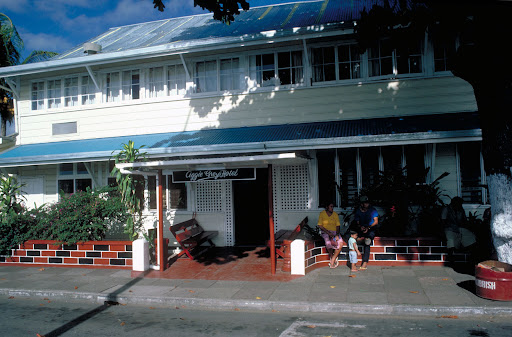 The entrance to Aggie Grey’s Hotel when I arrived.

I was allocated a fale and I knew what a fale was, and wondered how private it would be  . .

The above is a fale – or house without walls – but I need not have worried because I was shown to a fale near the pool at Aggie Grey’s. 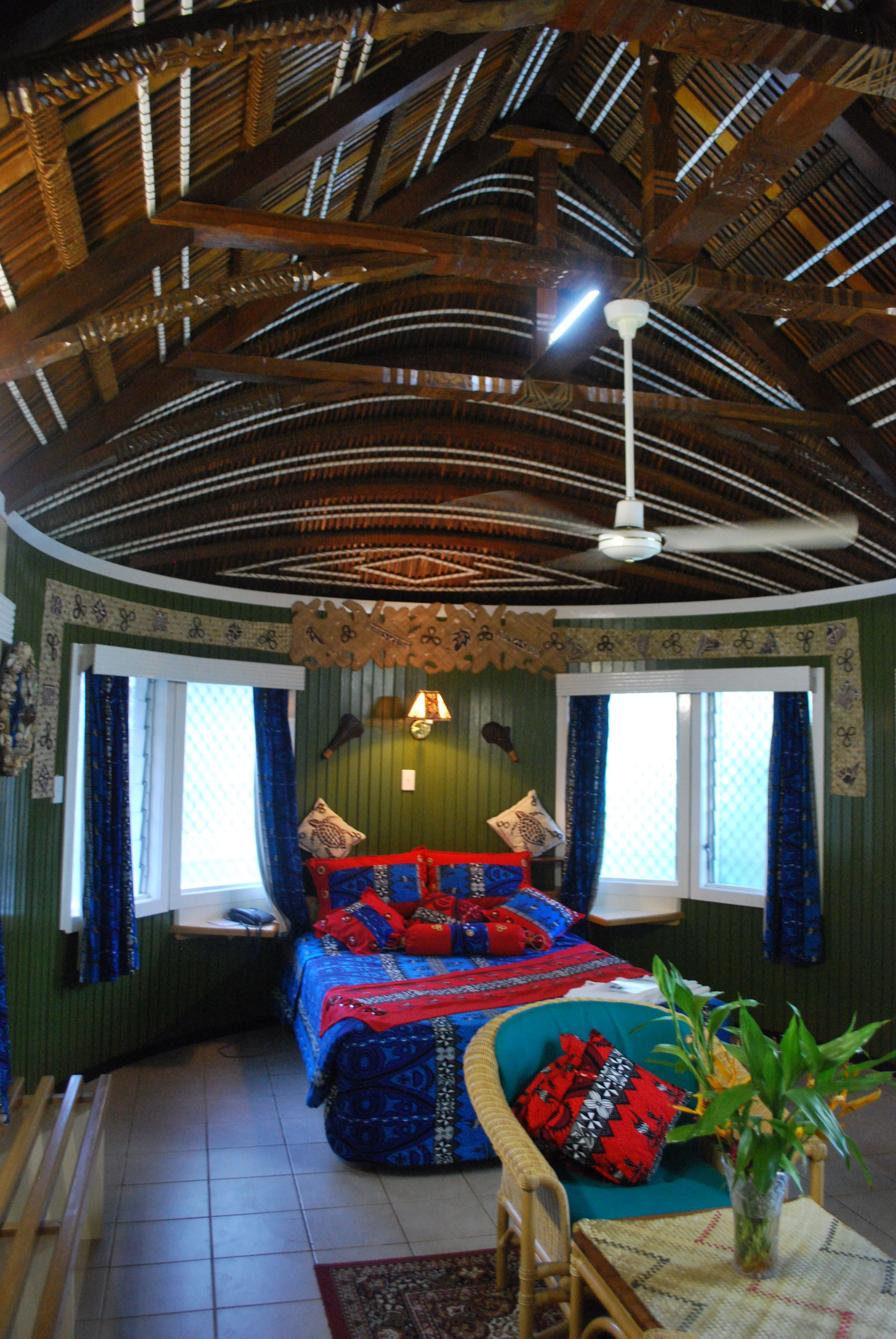 The fale that I was allocated looked something like this, it had a bed that was on a raised area, like a stage, above the rest of the floor and I looked down on the sitting area. 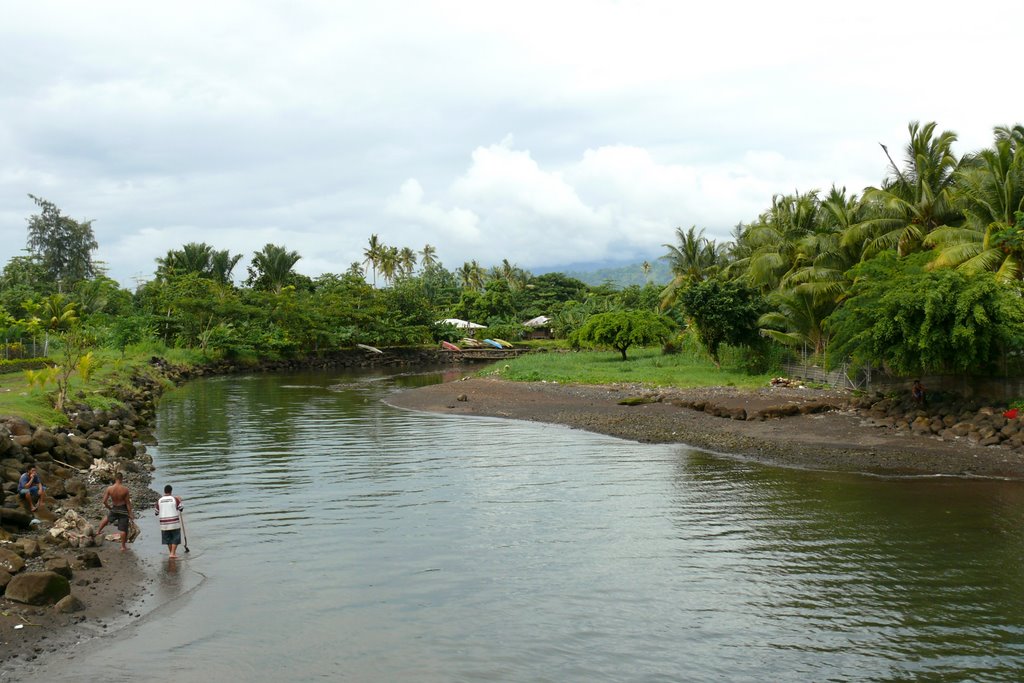 I later found out that because the hotel was located alongside the Vaisigano River, which had a tendance to flood in heavy rain – hence the raised bedded area.

My fale had an air-conditioning unit above the sitting area, a little noisy, but I soon got used to the sound, which was preferable to the humidity at night.

When I stepped out of my fale I had this to look forward to . .

The dining room was tropical with a difference compared to other Pacific Islands that I’d visited – in Aggies a huge amount of tropical fruit was available.
Large ceiling fans kept the dining area cool, and I was never bothered with flies or insects. 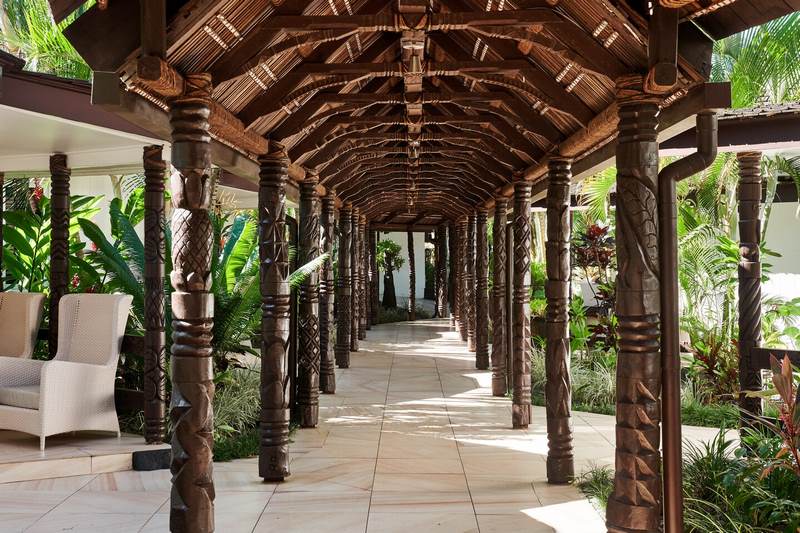 As I walked along the pathway to the dining room bananas hanging from the support poles were available – I could help myself as I walked – the bananas were not very large just over a mouthful, but they had a very pleasant taste.

From memory they were called apple bananas.

The above picture is how the walkway looks today, but not all that different than in 1987.

In the evening being a lone travel, I always have a book with me but instead of being shown to a single table I was ushered to a table with four or five others and introduced by the head waiter.
It turned out that we were all lone travellers wondering around the Pacific Islands on behalf of our companies, and later in my trip I did meet some of my dining companions in other locations.

At the end of the meal a bottle of port was placed in the middle of the table with the compliments of Aggie’s Hotel, a nice gesture that helped the chat amongst strangers.

A little about Aggie – her father was an English man, William J. Swann, who was born in England in 1859 and while he was a boy his family moved to New Zealand. At seventeen he was sent back to England to study medicine. He was home sick but bright, and passed his exams to become a chemist, like his father.

The Swann family moved to Fiji in 1867 where William concentrated on tropical diseases and later became a ship’s apothecary that traded around the Pacific islands. After some years he gave up the sea and decided to settle in Apia in Samoa and opened a business as a chemist.

In 1891 Swann courted and married Pele the daughter of a local chief. The wedding was a great time for feasting and celebration.

At the wedding was an honoured guest of the bridegroom, Robert Louis Stevenson, who had arrived in Apia in December 1889 and loved the place so much that he bought land just outside Apia, which became Vailima estate.

R.L Stevenson became known in Samoa as Tusitala, which means ‘writer of stories’ in Samoan.

Swann and Stevenson became very good friends, and they would often dine at a particular Chinese ‘shanty’ restaurant near the water’s edge. This place was owned by Kai Sue who used to talk about his time with Bully Hayes who was a well-known ‘black birder’ and shady character.
Bully Hayes had Shanghaied Kai Sue because he needed a cook aboard his schooner. Hayes kept Kai Sue on his ship for over two years. 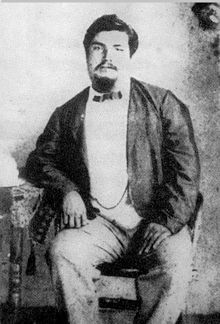 The above picture is of “Bully” Hayes aka William Henry Hayes and is dated 1863 – it is believed that another ship’s cook in 1877, after being threatened by Bully Hayes, shot him and threw him overboard. Nobody was concerned about his death.
If anyone is interested in ‘Blackbirding’& ‘Bully’ check out a book called ‘Cannibal Cargoes’ by Hector Holthouse.

Back to the Swann’s children – their first child was Maggie, who was born in 1893, their second child was Agnes Genevieve born in October 1897, and their third child, Mary was born 1899.

In 1917 Aggie married Gordon Hay-Mackenzie, a New Zealander who was the manager for the Union Steam Ship Company in Samoa.

As you see the church is quite famous and has adorned a stamp for 50 sene, which means 50 cents.
A Samoan Tala (ST) or dollar at today’s rate of ST 1 = about $0.50 AUD 0r $0.36 USD.
In 1918, during the global flu epidemic, Aggie boarded the Talune for the voyage back to Apia after visiting New Zealand.

The passengers onboard feared the disease as did Aggie, but she became ill during the voyage and nearly died.
Once the passengers left the ship in Apia the flu spread far and wide. The Samoans did not have resistance to this disease and thousands died. Fortunately, Aggie survived.

Colonel Robert Logan was the New Zealand Administrator for Samoa having held the position since the outbreak of war in 1914.
He did not have enough people to help bury the dead from the epidemic.
Many were cremated, but the Samoan Islanders were not keen on this so the Colonel gathered Solomon Islanders and Germans who were still in Samoa after WWI to dig a large pit to bury the dead.
The Solomon Islanders were then told to find the dead and to place the bodies in the pit.
To sweeten the unpleasantness for the Solomon islanders the Colonel gave each worker two ‘nobblers’ of whisky, which is about 10 fluid ounces or just under a half of today’s standard bottle of whisky!

They had just about filled one pit and had found a Chinese man in a fale stretched out, so they picked him up and placed him in the pit.
The Solomon Islanders began to scatter lime across the bodies when the Chinese man came back to life (he had been asleep) and ran off.
The islanders chased the man shouting that the doctor had said he was dead, so he must be dead, so stop running so that we can bury you properly.

Thankfully due to the ‘nobblers’ they soon tired of chasing the ‘dead’ Chinese man.

In 1925 Aggie’s husband Gordon Hay-Mackenzie became ill with tuberculosis and went to New Zealand in the hope of a cure, unfortunately he died soon after arriving in New Zealand.

4 thoughts on “Tusitala part one”