Ellice Is. gained independence from the UK on the 1st of October 1978 and anew country called Tuvalu was born.  Tuvalu means ‘eight standing together’ meaning the eight island & atolls that make up the country. There are nine islands, but at the time of independence, only eight islands were inhabited.

Tuvalu is the fourth smallest country in the world, the population of the island when I visited in 1987 was about 8,500, and the land mass of all of the islands is 26 sq Km (10 sq miles). They are a member of the Commonwealth and recognise Queen Elizabeth as the Queen of Tuvalu.

They do not have a military only a police force and a maritime surveillance vessel.

Guardian-class HMTSS Te Mataili II (Her/ His Majesty’s Tuvaluan State Ship) for search and rescue, a gift from Australia in 2019.

Funafuti is an atoll, and the capital of Tuvalu, and of the population 2000 of the 8500 live on this atoll. The country is not as wealthy as Kiribati.

I flew from Tarawa to Funafuti with Airline of the Marshall Island. 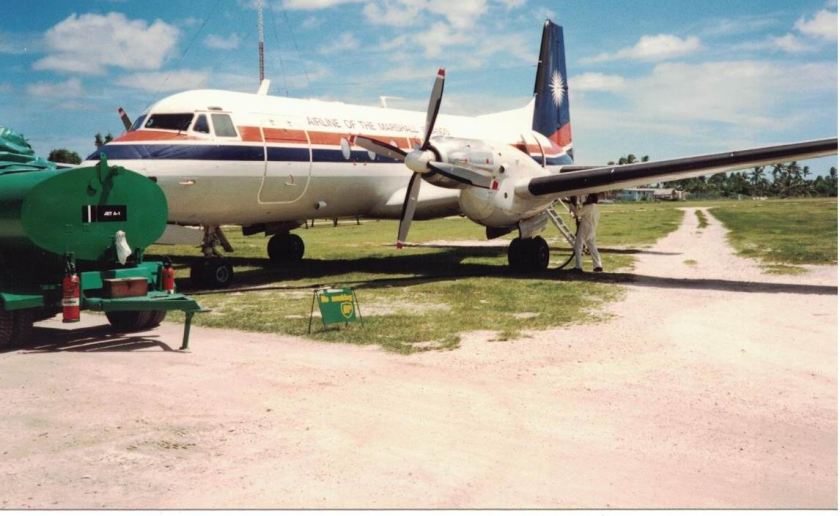 I took the above picture after I left the aircraft after a three-and-a-half hour flight from Tarawa.
The aircraft is a HS748, which first flew in June 1960!
It was a memorable flight because as we approached Funafuti to land the door between the flight deck and the passengers flew open. From my seat I was able to watch a very low island come clearer.
It was then that I realised that we were going to land on a grass strip, which at the time was being used as a football pitch by two teams and a large number of spectators.
As we got closer, I saw one of the players pick up the ball and run to the touchline to watch us land.

The aircraft came to a halt near a concrete structure – the arrival terminus.

Local people milled around on both sides of the ‘security area’, some helping to unload the cargo from the plane, others had just come to see what was happening as part of the day’s entertainment. The sun was hot and nobody moved at any great pace – I was on island time, and I should relax. 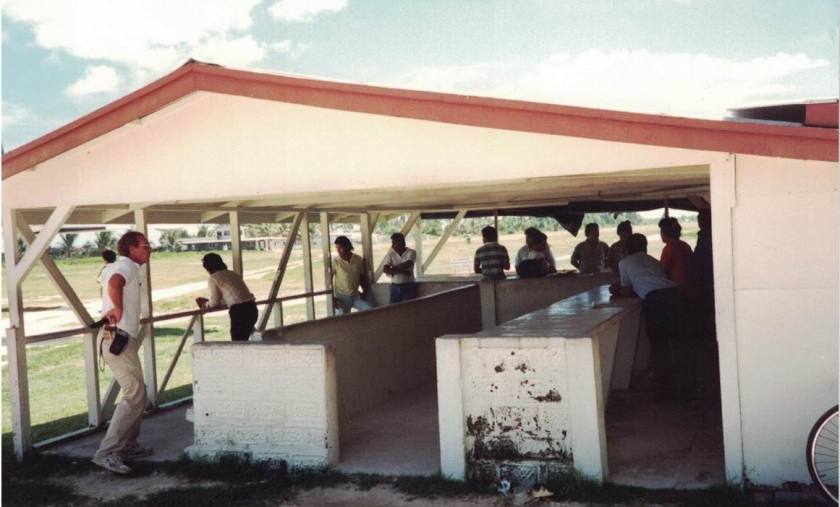 I was the only passenger to leave the aircraft, so I had the undivided attention of everyone.
An officer, in traditional island dress of sandals, and lungi tied at the waist, and a uniform shirt stood waiting at one side of a concrete table with a stamp and an ink pad. I was welcomed to Tuvalu and my passport was stamped.

Customs asked if I had anything to declare – I said No and was waved through the concrete area to a grass patch outside the open walled government building.

I anticipated that my business would not take more than a few hours, but due to flight schedules I was going to be ‘island bound’ over the weekend. I’d arrived on a Saturday and booked my onward ticket to Fiji for Monday.
I looked around for an airline employee to confirm my onward flight and found a young lady in a island skirt and an airline type blouse. I asked her if I could confirm my flight for Monday – she looked at me and asked if I was Woodland, the business man from Sydney?
I confirmed that I was, and she then told me that as I was the only person who wished to go to Fiji on Monday, they were not going to bring a plane in just for me – I was told to come back on Wednesday!

Tuvalu did not have a taxi service, so I started to walk to the hotel, which fortunately was only a couple of minutes from the ‘airport’. 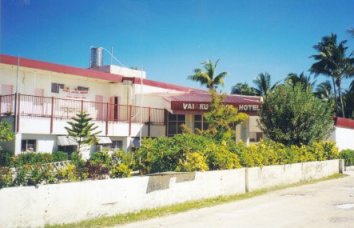 The Vaiaku Lagi Hotel, was government run and the only hotel on the island so I checked-in and was given a room overlooking the lagoon; it was air-conditioned!

I doubt that this view would have changed much – this the view is across the lagoon from my room.

Later I found out that most of the rooms did not have air-conditioning, which would be a problem for Europeans.
The only other guest was a Japanese merchant seaman waiting for his ship to return. He’d been put ashore for medical treatment.
He couldn’t speak English, and most of my Japanese, picked up during my time on the Japanese coast, had faded into history. He did teach me how to play Othello and I liked it so much that I bought the game for my children on my return to Sydney. 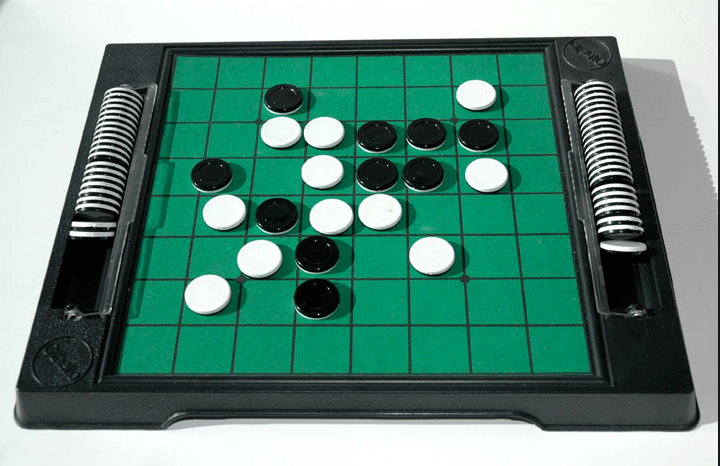 The person I was to meet was on another island and would not be back until the following morning.

After unpacking my few things I made my way to the bar and asked the barman, who was also the  check-in / doorman / waiter and I am not sure what else, what type of cold beer did the hotel stock. ‘We have Fosters’ was the reply – ‘What other kind of beer?’ I asked not being a great fan of Fosters

– ‘We have Fosters’ was his reply at which point he opened the door of a very large walk-in fridge behind the counter, allowing me to see that the fridge was stacked high with cartons of Fosters beer and nothing else. ‘I’ll have a Fosters!’ I said with a smile on my face.
‘Supply ship just unloaded the other day, plenty of Fosters’ was his comment while pouring the glass of cold beer. At times like this, Foster’s was the nectar of the Gods.

In the evening I decided to stay in the hotel for my evening meal. The hotel didn’t have a menu, the Japanese and I were asked what we would like to eat.

I asked what the choice was and was told fish or meat. I asked if the fish was fresh and was told that it had arrived in the morning, so I chose the fish. The meat on offer was a mixture of chicken (locally grown) and meat from Australia, which was expensive.

I asked for salad with the fish and was told that they didn’t have any, just vegetables – so I ordered the vegetables which, when they arrived turned out to be from a tin – I was hoping in such a lush climate to have fresh vegetables. Let’s say it was a disappointment.
I asked if they had any cold white wine to go with the fish – ‘We have Fosters’ was the reply.

Later in the evening while listening to the radio in the bar, I heard the news, and included in the news was the fact that a businessman from Sydney had arrived that afternoon. Was this my fifteen minutes of fame, or was the radio station hard up to fill broadcasting time?

I completed my business the following morning and decided after lunch to have a look around Funafuti.

Knowing that there wouldn’t be any aircraft landing between Saturday afternoon and Wednesday and noticing that the immigration and customs posted had been abandoned, I walked across the football pitch, come runway, to the other side of the island. I passed huts inside a fenced area and wondered what this area was because the gate was wide open.

It was later when I found out that the gated area was the local prison. The above picture is a recent photograph. I did ask why the gate was open and was told – ‘Where are the prisoners going to escape to?’. . .

On reaching the water’s edge (the opposite side of the island from the lagoon) I watched Pacific Ocean rollers charging towards the little island and smashing their way on to huge man-made blocks, which dissipated their energy. I was grateful for the blocks, because the highest point on the island was only 4.5 mtrs (15 feet) above sea level. 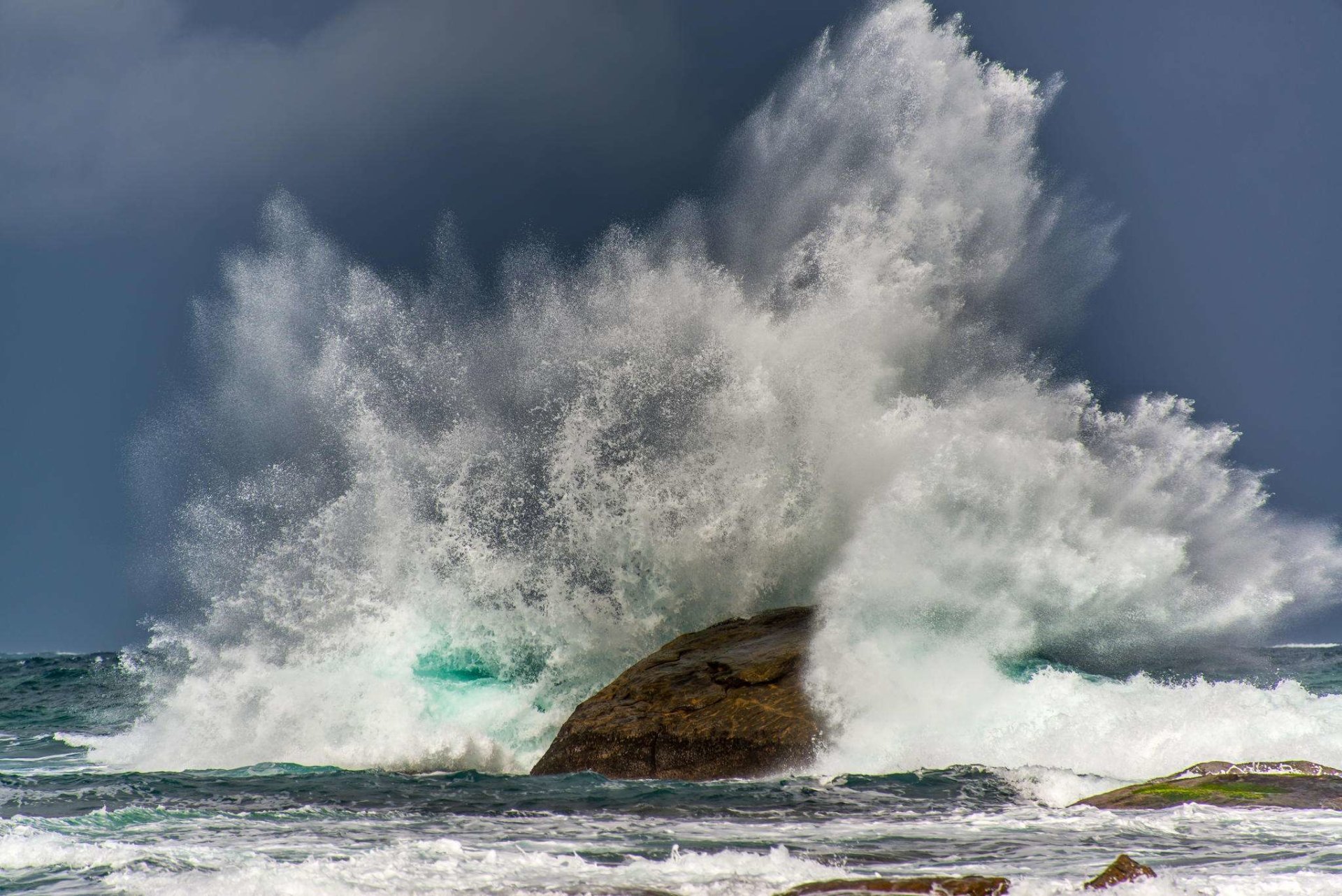 Everything shut down late Saturday and the only entertainment for me was sitting in the hotel bar with a book and the occasional game of Othello. Trying to get through to Sydney by phone, to keep them informed of my movements, helped pass the time. The fact that they had no idea that I was not lying on a beach in a fancy beach side resort somewhere in the tropics, didn’t help matters.

Sunday was a drag but there was a small distraction when the flight that I had arrived on transited Funafuti (the airline code being FUN!) on its way back to the Marshall Islands. The travel shop was open as was the basket shop for transit passengers . . . . I borrowed an umbrella due to the heavy rain any distraction was valuable.
Monday arrived and the post office opened at 10.00 am because I was interested in stamps, and at that time I collected stamps from certain Pacific Islands. It turned out that philatelists are one of the best contributors to the Tuvaluan economy, along with cash sent home by Tuvaluan seaman working on foreign ships.
The next thing I did was join the Tuvaluan library, and I think I might still be a member

The enforced rest can be a strain knowing that all your plans have been shot to pieces and communication with the outside world was difficult.
E-mailing was still in the future, as was the mobile phone.

But overall I enjoyed my enforced rest in Tuvalu, because it was completely different place than anywhere else that I had visited.