Two days after Pearl Harbour the Japanese attacked and captured Tarawa in December 1941.

The island became a fortress, buildings were knocked down and all the palm trees removed. The local population became slaves and were forced to create bunkers, an airstrip and concrete structures with metal spikes concreted into the coral reefs around the atoll, all fishing boats were destroyed along with any other form of boat or canoe etc .
Once everything was completed the local population were forced to leave the atoll and they had to walk up to 25 miles across coral reefs to the northern area of the atoll.
During my trip to Tarawa in the 1980’s I saw eight-inch guns still point out to sea. I was told (not by locals) that the guns had been removed from Singapore, after the fall of that island, and transported to the Pacific to defend Tarawa. Later I read that the Imperial War Museum in London stated that Singapore didn’t have any eight inch guns for the Japanese to capture, so they couldn’t have been transferred to Tarawa from Singapore.
They were in fact manufactured in Britain for a contract to supply eight inch and twelve inch guns to the Japanese navy for the Japan – Russian war of 1904-1905.
The Tarawa defensive guns appear to have been part of this contract.

The Japanese airstrip when I visited Tarawa. The trees had returned, but the actual landing strip was causing problems for even the grass to grow.

Tarawa was the most heavily defended atoll that the Americans would attack in WW2.
The Americans had to estimate how many troops were defending the atoll. The best guess was about 3100 men, which was reasonably accurate, considering that they were unable to send in reconnaissance units to obtain a more accurate number. The Americans realised from aerial photographs, that the Japanese built their latrines over water, in multi-holed wooden buildings. By counting the number of latrines, they worked out the relationship between the number of backsides to a latrine and estimated 3100 troops!

The Japanese commander (Admiral Shibazaki) said that the Americans could not take Tarawa with a million men in a hundred years.
With 100 pillboxes, concrete bunkers, anti-aircraft guns, coral shallow reefs ring with barbed wire and mines plus entrenched machine guns manned by 4500 Japanese troops, it is not surprising that the Japanese commander made such a comment.

When the Americans arrived off Tarawa and sent off the first wave of troops there were problems – the tide was lower than expected and some of the landing craft and amphibious tanks became stuck on coral reefs within range of the Japanese’s guns. Some of the invading troops left the ‘security’ of the landing craft and waded hundreds of yards to the beach under constant fire from the Japanese.

As I walked along the shoreline, I could see the remains of landing craft and aircraft at low tide. It was during the 20th to the 23rd of November 1943 that the Battle of Tarawa was fought between the Americans and the Japanese. 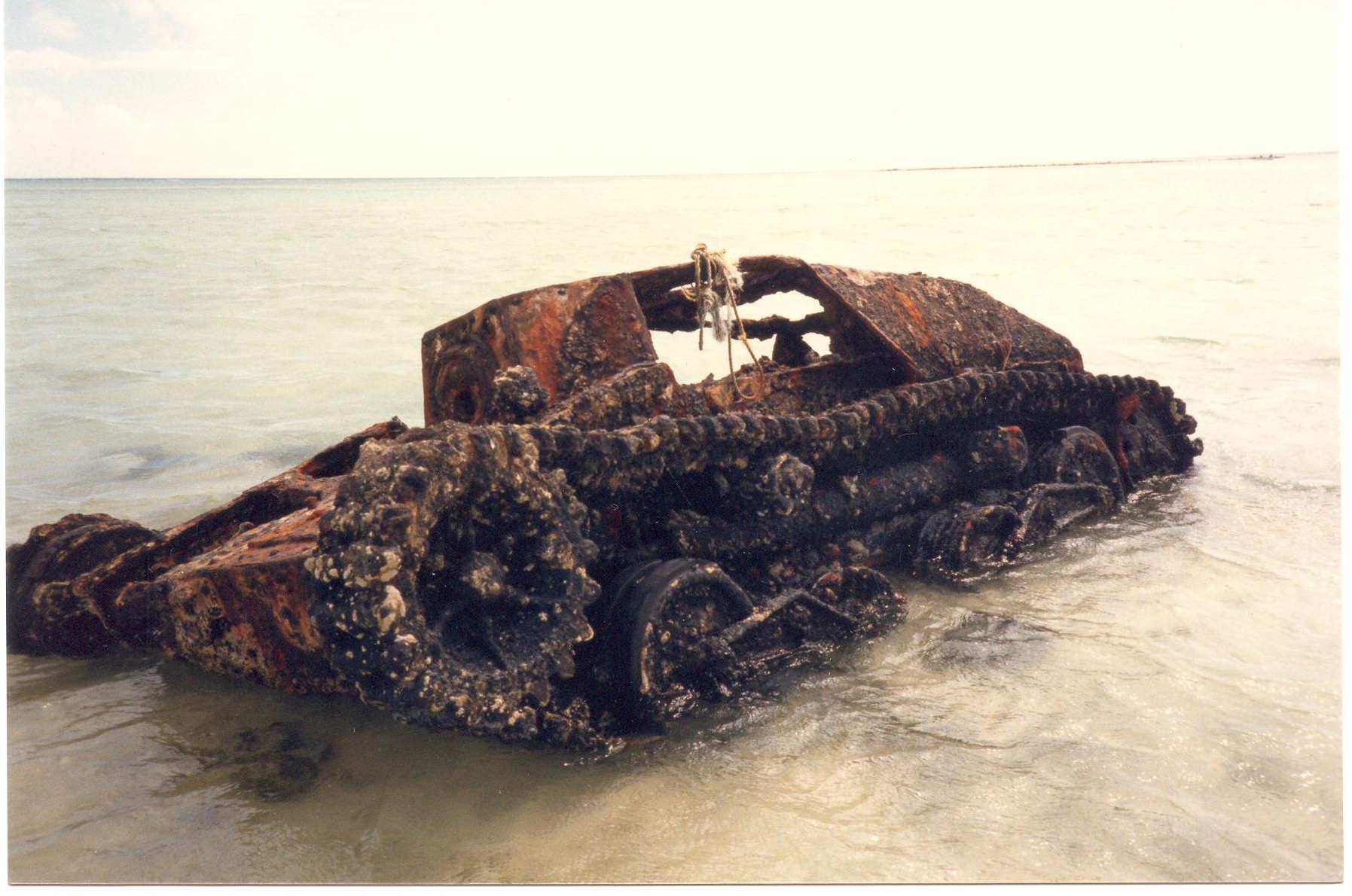 I walked out to the remains and looking back at the beach and thought  is it any wonder the Americans lost so many. On the third day of the battle the tide was higher, which allowed destroyers to get close in and pinpoint the enemy.

The battle lasted 76 hours and in the final hours the Japanese launched a banzai attack. When the battle finished of the 4500 Japanese defenders only 17 remained alive.

The Americans lost more than 1113 dead and 2290 wounded of their 18,000 attacking force in the three day-battle.
They lost nearly as many killed-in-action during the three days of the battle for Tarawa, as they lost in six months when taking Guadalcanal Island. 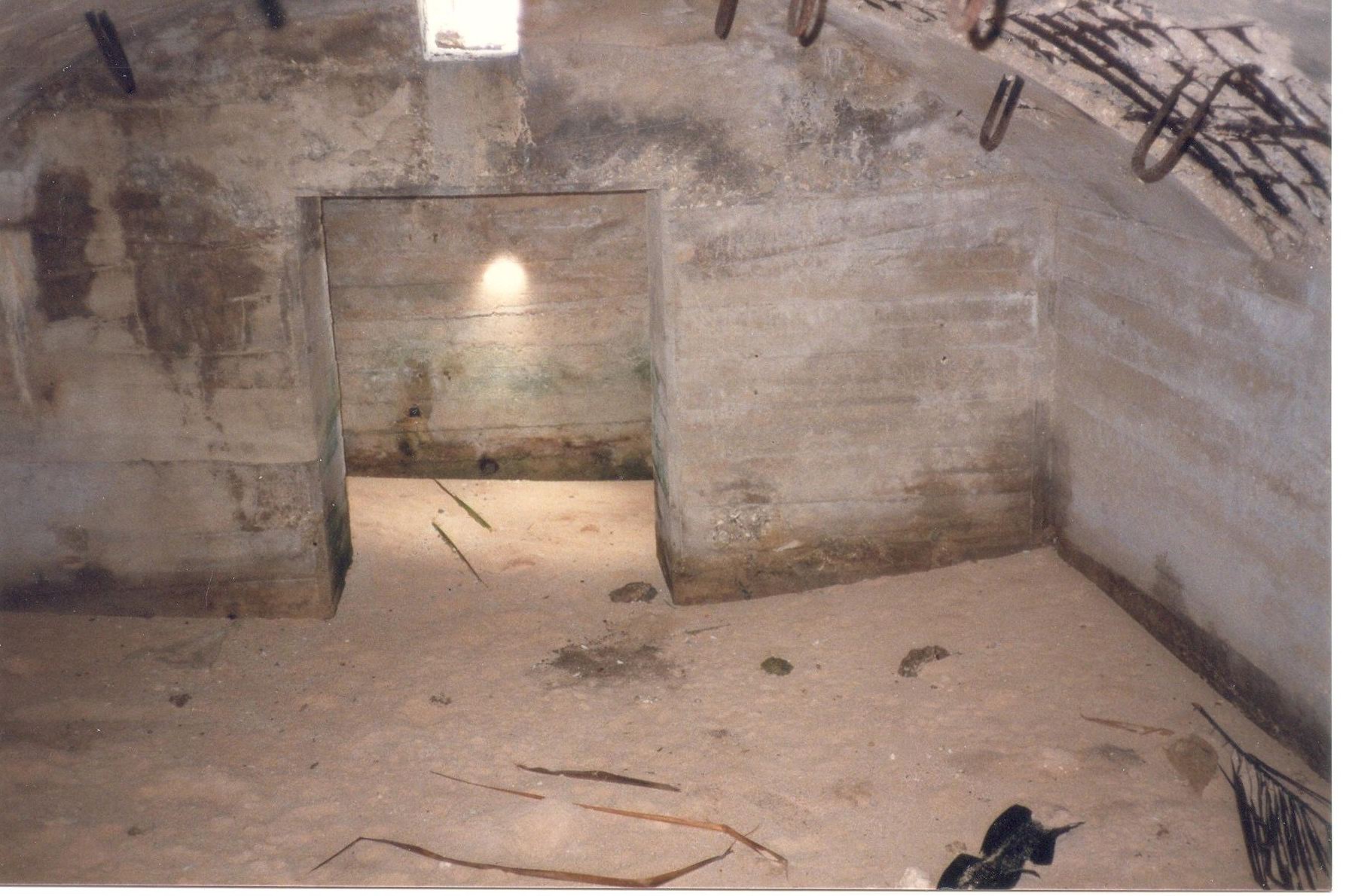 Inside a Japanese pillbox near the beach. 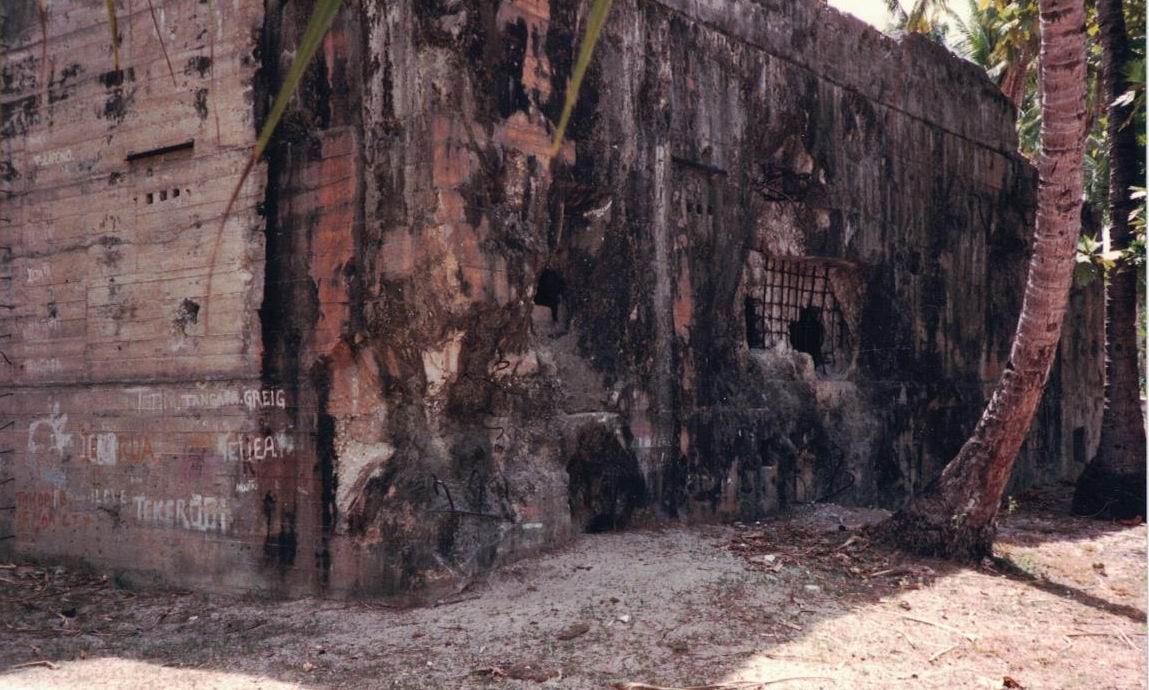 The above pictures show the Japanese HQ building with shell and machine gun damage, which when I visited was being used a simple squash court.

What the area looked like on the 24th of November 1943, the day after the battle.
I walked along the same beach 44 years later – Tarawa Atoll (the area in question) is 3.2 km (2 miles) long and the narrow bit is 730 mts (800 yards) at the widest point.
The link below is a six-minute piece of colour film of the landing.