With a capacity of 800 you had to be seated at least 30 minutes before the show began. 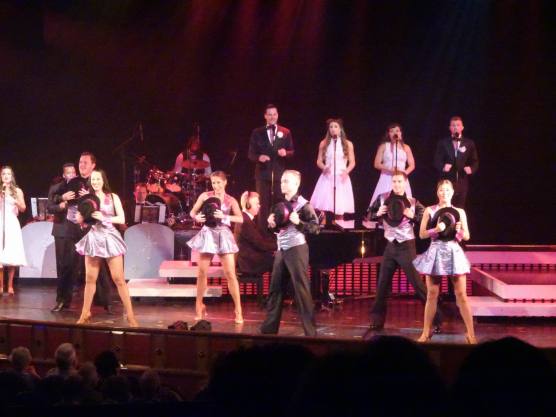 The Princess ships have their own dancers and singers, and their own musical backing – in addition, various outside entertainers are engaged for one or two nights. They would fly in – entertain the passengers and fly out from the next convenient port.

The ship’s dancers and musician were permanent. Maureen & have cruised with four different cruise companies and found that the ship’s resident entertainers (singers & dancers) have been excellent.
Princess cruises has a dance studio in California (I think) where the dancers and singers are trained, and new shows created. The shows are rotated throughout the fleet, but we’ve never seen the same show on different ships. 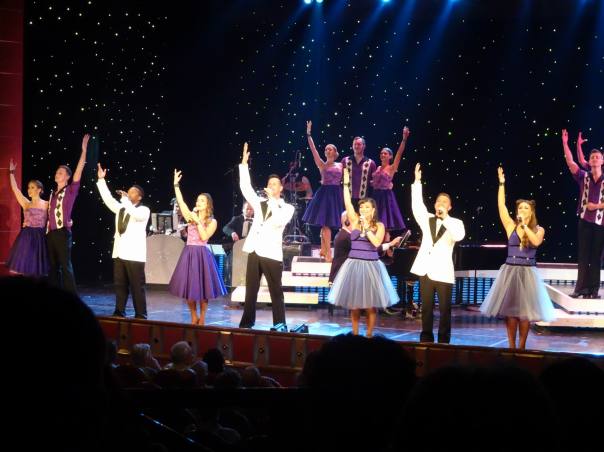 The finally of the first show on the Ruby Princess. 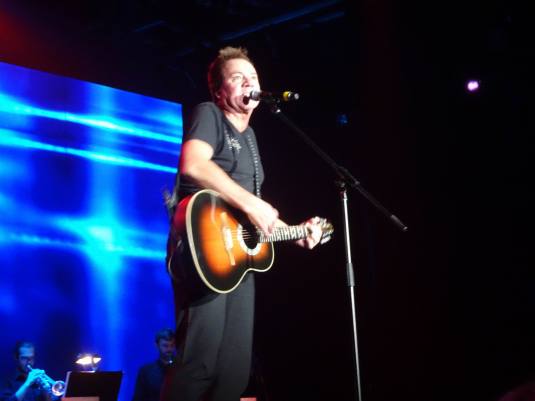 The following evening we went to see Patrick McMahon, singer, songwriter & entertainer. I’d never heard of him, but he was very good and after checking details about him I realised what I’d been missing. He sang a number of different styles of music from country, jazz, rock & roll etc. He was so full of energy that I became tired watching him as he jumped all over the stage while playing instruments.
He has more energy than someone half his age, and when you see the clip remember he is 60 years old!

Boy was this guy good – he could play the clarinet, saxophone, piano, guitar, and he could sing! Chris Gable the link will take you to a sample of his musical skills. If you wish for Glen Miller fast forward to near the end. 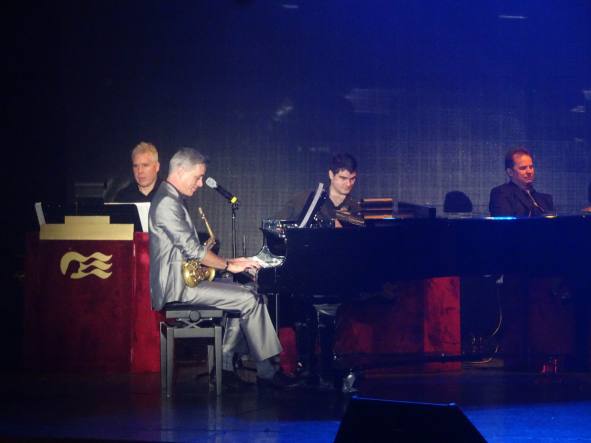 At the end of the show he played the wind instruments for  Golden Wedding and the ship’s drummer at the back was able to match Gable’s skill – the drummer was just great.
The link is not to Chris Gable or the drummer, but to the piece of music.

At the end the audience went mad . . . not just for Chris Gable, but also for the drummer!

Chris Gable was so popular they arranged an additional show later in the cruise, and he produced a different musical show, which was just a popular with the audience.

We also watched comic conjurer, but I didn’t take any photographs as I thought he was disappointing.

Another night we watched Suzanne Ptentice a New Zealand singer from Invercargill.
She sang a mixture of songs, but as my knowledge of country western music is limited I’d never heard of her. She was awarded the OBE by the Queen in 1995 for services to music. She was very pleasant.

The following night is was the resident dancers and singer in a show called Once upon a Dream. This show was a mixture of classical, Beatles and bits of POP – I thought is was well done as it was supposed to be a dream and as we know dreams are always mixed-up. 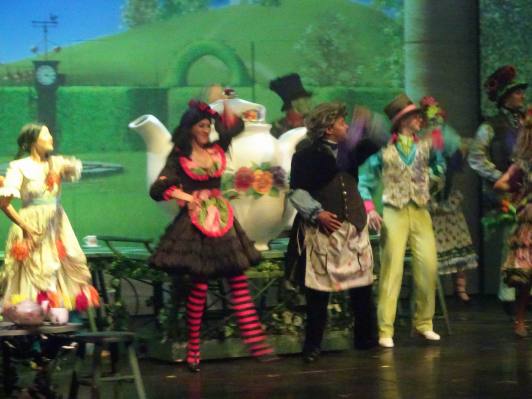 from Alice in Wonderland 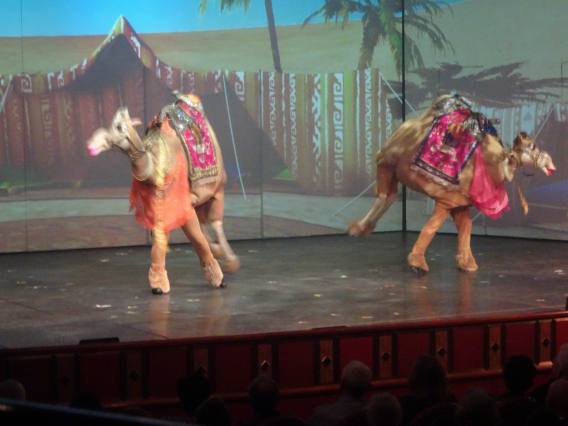 For some reason the dancing camels reminded me of  Wilson & Keppel    from a 1934 film – and before someone asks, no I was not at the premier of this film! 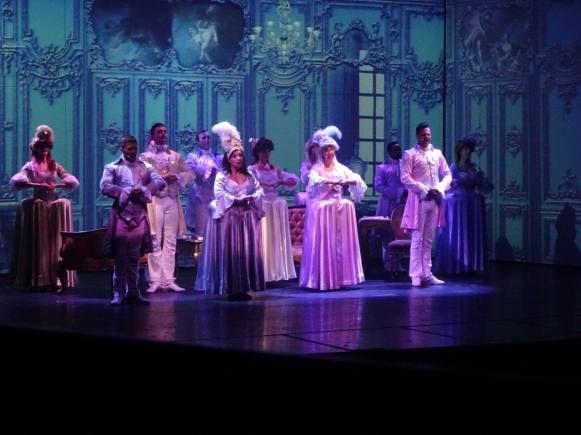 A change of pace and time tone to the 18th century . . . the cast worked hard and were very good – singing & dancing at the same time.

Our last port of call was Noumea, where Jon Darsk joined the ship. Another great entertainer – piano player, violinist, singer and a personality to match.

He would play the piano as fast as he could with one piece of music, and then switch to boogie woogie, everything just flowed.

In the theater staff walked around ready to take orders for drinks before the entertainment started, so I thought I’d post the cost of a sample of the drinks. 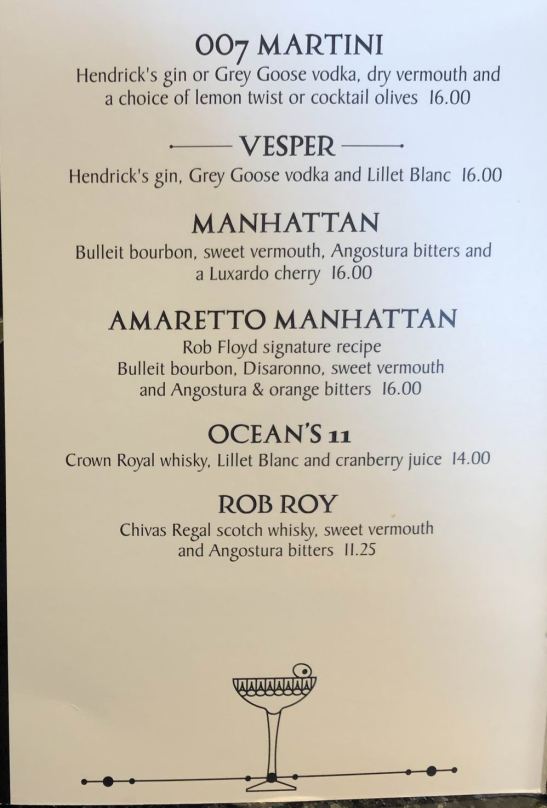 There was a large variety of cocktails – I have only posted a couple of pages as samples, all the prices are Australian dollars. 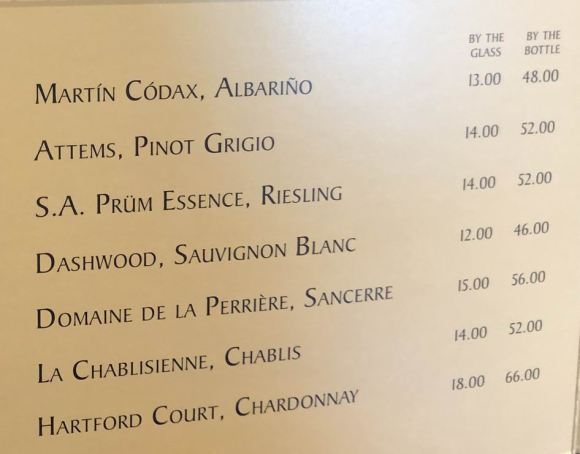 The above is the cost of white wine, it is obvious that you are encouraged to buy a bottle, which will be cheaper than the cost of four single glasses.

But if you only drink beer –

The cost of a non-alcoholic bottle of beer is more expensive than in a Sydney restaurant.

All the above photographs of the drink’s lists are thanks to our friends who were travelling with us.

If you are considering a cruise and you like a drink with your meal make sure you build the above costs in to your budget.

I could have bought a ‘drinks package’ that would have allowed me to have up to 15 drinks for a set daily rate, which was about $89 AUD.
Even in my younger days I’d have had trouble drinking fifteen drinks EVERY day.
To break even you’d have to drink 10 bottles of beer a day or six glasses of red (the package doesn’t include bottled wine), or six and a half glasses of white. The cruise was 14 days so the drinks package would have cost $1,246 (AUD) per person. This has to be taken into account when budgeting.

The idea of inexpensive duty-free drinks that used to be the norm when travelling by sea, before the cruise craze came about, has disappeared.

Mural in the Crooners Bar

2 thoughts on “Entertainment & a drink”