Ushuaia on the Tierra del Fuego archipelago, is considered the most southerly city in the world – also known as the end of the world.

We arrived in Ushusia at 6.00 pm and immediately went alongside. We were all looking forward to the excursion the next day, which was a trip on the End of the World Train.

The six of us had booked 1st class seats for the journey, and the price included lunch. Our plan for the day was to go ashore early and visit the town of Ushuaia, and at around 11.00 am take a couple of taxis to the main station of the End of the World Train,

so as to have a look around the small terminus, and perhaps buy some souvenirs before boarding the train.

From the ship the town looked an interesting place.

The pink roofed buildings is the old prison, which used to hold 600 convicts. The prisoners were used to help build the town, public works, homes etc, and they also supplied the town with firewood, bread, and electrical power; prisoners and citizens relied on each other. The prison was closed in 1947, and it is now a tourist attraction.

After dinner an hour’s entertainment fitted well before an early night.
Helen Jayne  would be leaving us the next day to fly back to the UK.

We rose early so as to be out and about and make the best of our time ashore, but . . .

Over night the wind had increased and by morning we were not allowed to open our balcony doors, nor go out on deck, and the gangway had been taken in for safety, so nobody was allowed ashore. The wind speed had increased to 59 knts per hour (109 km per hour or 69 mph).

Note the white caps in an enclosed bay, as the wind increased.

Maureen & I were in the Living Room, which is close to the bow and we watched the above ferry try six times to come alongside just ahead of us.

After he’d tried six times the authorities closed the port and ships were not allowed in or out. The ferry was ordered out and to anchor in the harbour.

Helen Jayne missed her flights because of the lack of gangway. Early in the day we could see some planes taking off, but later I think they closed the airport as well.

We had nine mooring lines out forward and nine after (I counted them later) when we usually just had four or five. In addition the Captain had ordered the ‘thrusters’ to be used to keep us alongside. The wind was trying to push us off the wharf and the use of the thrusters was to keep us along side.
Thrusters are used in confined areas to assist with berthing and un-dock of ships, and are not supposed to be kept running for a long time – on this day both were running continuous for seven hours.
Later we had a chance to chat to the Captain and we asked about the thrusters and he told us that he was concerned about burnout, but due to the very cold water from the Antarctic the thrusters didn’t over heat.

After lunch the wind dropped a little, which was enough to open the port again. The ferryboat that had abandoned its effort to dock waited her chance to come alongside and this time made it safely. Also, another cruise ship came in and berthed on the other side of our wharf .

She was the Seabourn Quest 32,000 gt, which makes her a similar sized vessel as the Azmara Pursuit, which is30,000 gt.

The port had reopened and ships began to move.

A little later the wind had dropped enough for the Captain to allow the passengers ashore if they wished.

There is an old sailors superstition that it is bad luck to whistle on board a ship, because this can bring the wind or increase the wind’s strength.
The only person allowed to whistle on board was the cook – because while he is whistling he is not steeling food.

By now it was afternoon and we knew that we had missed End of the World Train, but fortunately we hadn’t paid anything.

The six of us walked in to town and had a look around – Maureen bought two stuffed penguins as souvenirs.

As we left the wharf we came across the monument to celebrate the first white settlers to the area.

It depicts the Andes mountains, snow & the wings of an albatross, & incidents of the history of the town are dotted around the main monument.

We did consider a hop on hop off bus but the timings didn’t fit with the ship’s departure.

During our walk we came across a restaurant that BBQ’d their meat in the window – later we realised that this was normal. 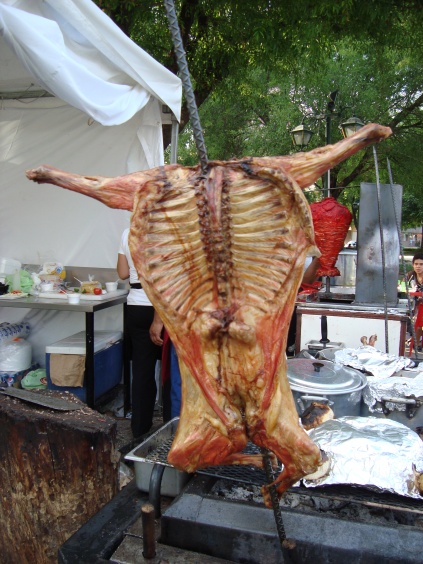 An Argentinian home BBQ . . . a little different than an Aussie BBQ.

Everywhere we looked we saw penguins – I don’t think the locals eat their penguins, unlike the Aussies who eat their kangaroo.

I saw this sign from a distance and thought of a certain book company – and wondered if they’d have any books in English – when I got close enough I realised that it was a chocolate shop – perhaps they do eat their penguins, but wrapped in chocolate.

Ushuaia felt quite prosperous, perhaps they have a tax concession for being at the end of the World. . . .

Plenty of late model cars around.

For those who wish to pronounce Ushuaia click on this link Ushuaia ,
or just try  . . . .  Ush-U-Why-A

Ushuaia is the capital of Tierra del Fuego’s Argentinian area. The town was founded in 1884 by Augusto Lasserre (1826-1906) who was an officer in the Argentine Navy.

Before the Commander founded the town the area was  inhabited  by many who were not Argentinian citizens, including a number of British subjects.
The town was originally founded in an informal way by British missionaries, following the British surveys, many years before Argentine nationals or government representatives arrived on a permanent basis.

HMS Beagle first arrived in 1833 on its first survey of the area, and the town was named by British missionaries using the native name  Yamana after the area.
Much of the early history of the city is described in Lucas Bridges book Uttermost Part of the Earth, which was published in 1948. The name Ushuaia first appears in letters and reports by the S. American Mission Society in England. It was a British missionary Waite Stirling who was the first European to live in the town when he lived with the Yámana people in 1869.
More British missionaries arrived in 1870 and established a settlement.

Lucas Bridge was known as the third white native of the area, being born in 1874. His elder brother was the first, having been born in 1872. Their father was Thomas Bridges an Anglican missionary, who was married to Mary Ann Varder, who was also English.

Lucas Bridges was fluent in English, Yahgan, and Selk’nam (two of the local languages). His book was about his families experiences in Ushuaia and how colonization had affected the local population after the gold and sheep booms that had brought a considerable number of Europeans, and European  diseases, which decimated the local Yahagan &. Selk’nam tribes. 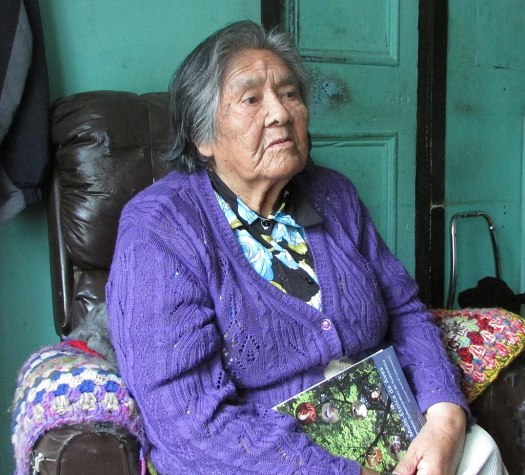 Cristina Calderón (born May 24, 1928 – this lady is the last full blooded Yaghan person. According to the internet she was still alive in 2017.

Often called  “Abuela“, which is Spanish for “grandmother”