Lunch on our second day, was at our own expense, but the guide made sure that the restaurant that we visited was able to cope with 12 of us dropping in for a meal.

I asked the guide for a traditional Russian light lunch, not borscht or beef stroganoff. She’d chosen a restaurant that offered a type of wrap – it’s advertised in the above picture.

We all sat at different tables in blocks of four, which was the layout of the restaurant.

We had a chat with the waitress, who was very pleasant and tried her best to understand us, but her English was very limited and our Russian was nil. I was trying to ask for a gluten free dish for Maureen, and we didn’t get anywhere until I called the guide over to help with the ordering.

Our first priority were the drinks – I wanted Russian beer and the waitress kept pushing German beer, which was not much different in price, but when in a country I like to try their own beer.

The Russian beer, based on the menu card, was fine, but I was a little concerned because of the beer mats. The above beer mat is for Krusovice, which is a Czech brewery named after the village where it originated. 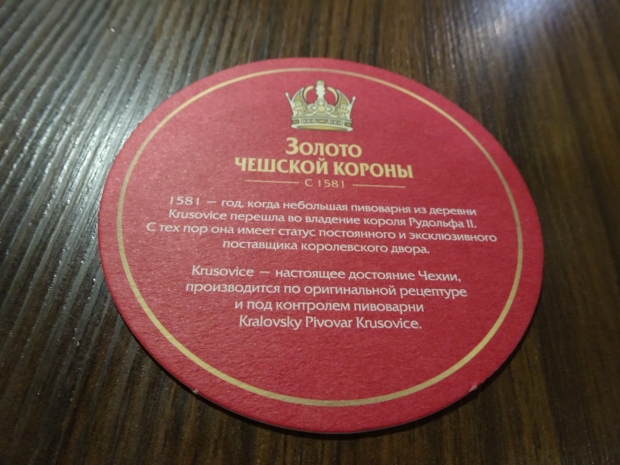 The crown shown, is not Russian, but Austrian, so as the beer I drank was draft beer, I am not sure if it was Russian or  Czech or even German. 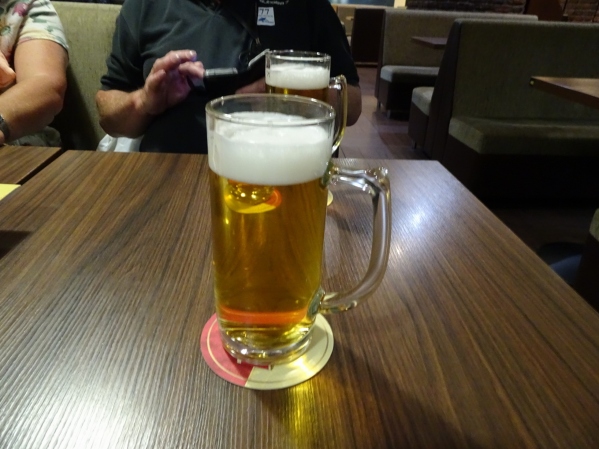 Regardless it was a pleasant drop that hit the thirst spot. 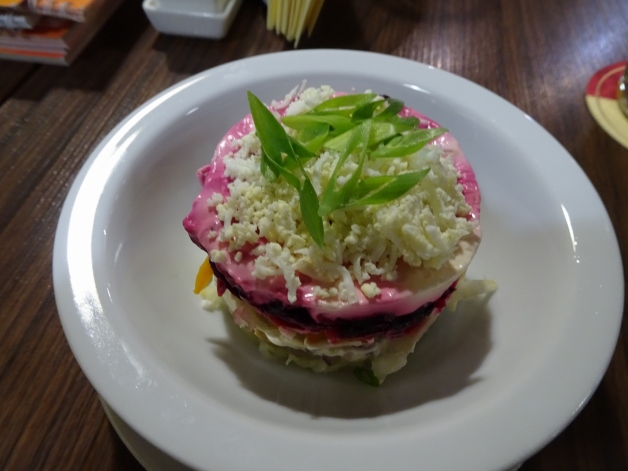 Maureen’s gluten free meal – it looked attractive and from memory Maureen enjoyed it.

I ordered the above, which was filled with a Chinese type vegetables, with chili sauce on the side. I’d only seen pictures and worked out that you could have two for a certain price or one for a cheaper price. I wasn’t sure if they meant double fillings or two full wraps, so just picked one, which was a specialty of the house. I thought that if they were small, and I was still hungry, I could always order another. As you see one was enough. Puff pastry filled with stir fried vegetables – it was OK, but I didn’t think this was particularly Russian – but I might be wrong.

The experience was entertaining, the food OK, and beer cold, and we were on holiday so, can’t complain. The meal & drinks for both of us, cost less than USD $15.