I was sixteen when I made my first visit ‘abroad’ in 1960, I’d been asked to help a teacher  to look after a group of British school children while visiting Germany. We were to stay at Youth Hostels as we made our way up the Rhine by rail and returned via paddle steamer, Bismark

Due to the very long journey from Birkenhead to Ostend, the group leader had booked us in to the Zeebrugge youth hostel, which was a short distance along the coast from Ostend. The one thing I do remember about Ostend was a particular coffee bar, which had a jukebox.
Jukeboxes were not new to us, but we’d never seen a jukebox linked to a TV screen. For one Belgium franc (well before the EEC and the Euro) we were able to play popular songs and watch the singer on the screen. This is the only memory I have about my first visit to a foreign city. 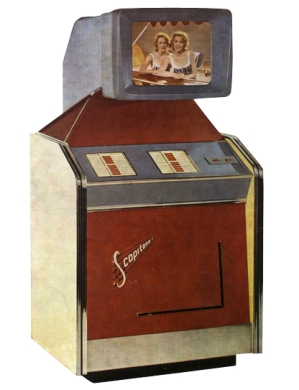 As we entered Zeebruge harbour aboard Celebrity Silhouette recently, I found myself thinking of the Mersey ferry boats, Daffodil & the Iris in WW1, on St George’s Day 1918. 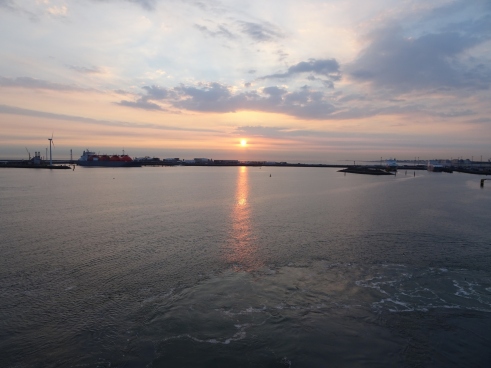 The entrance to the harbour can be seen (beyond the the immediate quay) where the British sank the two derelict vessels.

The two ferries took part in the commando raid to sink obsolete ships in the main channel at Zeebrugge, to prevent German U-boats leaving port. Although badly damaged, and with many killed and wounded, the two ferryboats managed to return to England, and eventually made their way back to Mersey.

Daffodil arriving back in the Mersey after emergency repairs at Chatham

Above is the Iris on her return – both ships carried the HMS prefix during the raid., and both had a large number of shell holes. In addition the superstructure had been riddled with machine gun fire. The funnel of the Iris was kept as a ‘memorial’ for some time, but I not sure where it is now.
Eight VCs were awarded after the raid, unfortunately two hundred and twenty seven men were killed, and of those I think seventy are buried in the cemetery at Dover. The whole operation called for volunteers and of the 1700 who volunteered eleven were Australian. Of the eleven, seven were decorated for bravery and some of their medals can be seen in Canberra.

Dover marked the centenary of the raid earlier this year. The link is a very short video.

In honour of their contribution to the raid King George V conferred the pre-fix ‘Royal’ on both Mersey ships, and they became the ‘Royal Iris’ & the ‘Royal Daffodil’. The second descendant of the ‘Royal Iris’ came in to service in 1951, and it was in the 1965, on this ‘Royal Iris’, that I danced with a young girl who would later become my wife, forty nine years ago.

My day dreaming suddenly changes as the Sapphire Princess crossed my sight to berth next door to us.

Belgium navy ships berthed across from our berth. I wonder if they think of the raid on St George’s Day (23rd April).

On to happier thoughts as we crossed the canal bridge leading in to Bruges, after the coach ride from Zeebruge. The drive was just over half an hour and once in Bruges I had the feeling of stepping back in time.

Maureen & I were part of a ship’s tour and the guide, who was seventy, was full of anecdotes, information and jokes – a perfect guide. 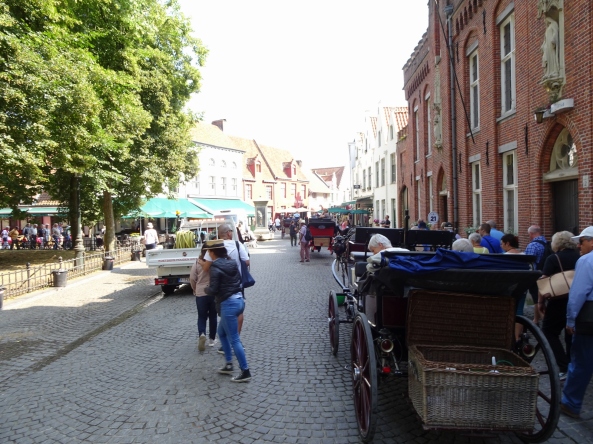 Very few cars but enough horse a carriages to keep the tourists happy.

With two cruises ships in port the crowds were not as bad as I expected. 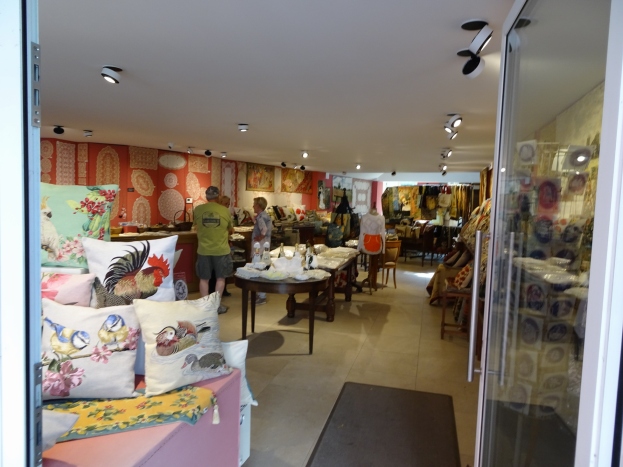 Couldn’t resist taking a photo of the inside of this shop, it looked so colourful and inviting, selling Belgium lace and various other linen products. 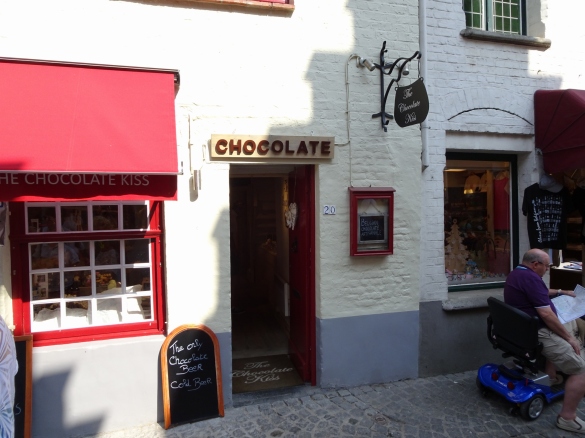 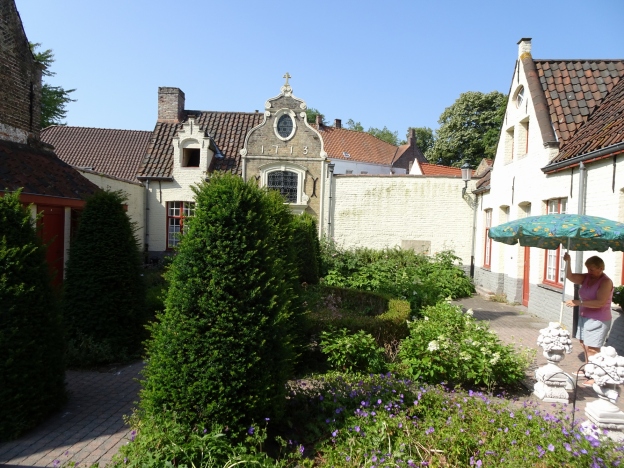 We were in the old part of the town and making our way to the main market square. The central building with the cross on the top was built in 1713 as a place for destitute women – an alms house in English. It is still used today for the elderly of small means.

The wall of one of the God houses – originally built by wealthy merchants for those who could no longer look after themselves.

We passed another during our walk – built in 1330, and still in use.

took this because I liked the scene. 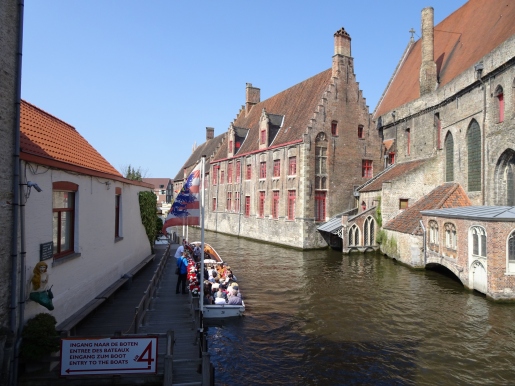 Canal scene with a tourist boat.

To get to the main market square we had to cross a very small bridge that had people coming towards us as well as those behind all moving forward.

I stopped on the bridge for a photo and people flowed around me like water. 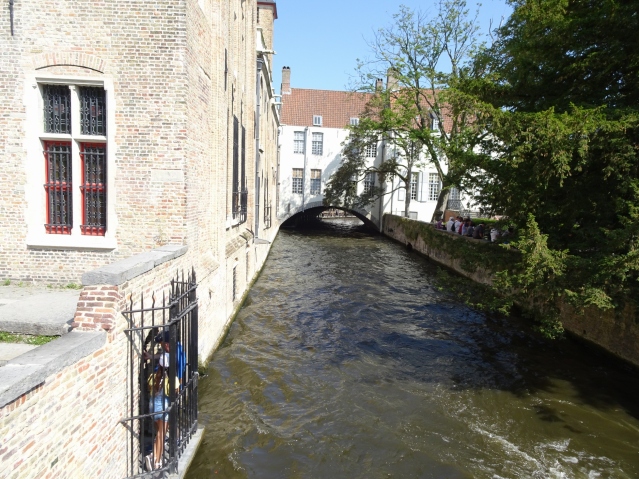 I then managed to get to the other side of the bridge . . 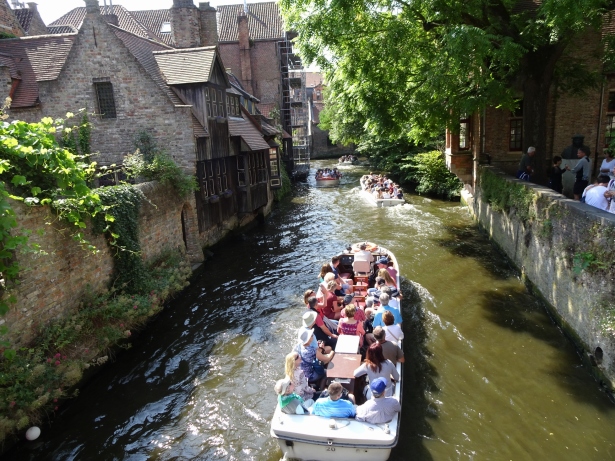 . . . and then back to my original place – the tourist boats were very popular, but our choice had been for something other than a tourist boat. 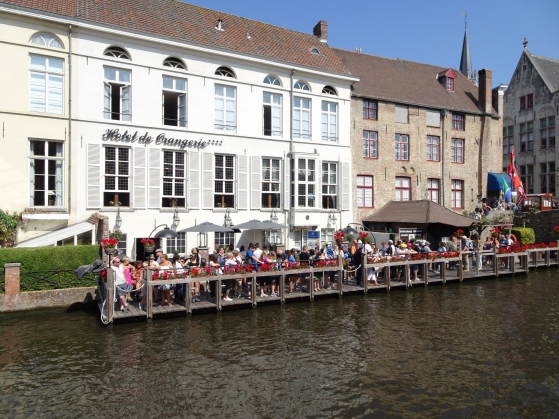 When I saw the crowd outside the hotel I thought what a lovely place to sit and have a drink, only when I got closer did I realise it was a long queue for one of the tourist boats.

The whole area could have been a Disney set, but it was all real. 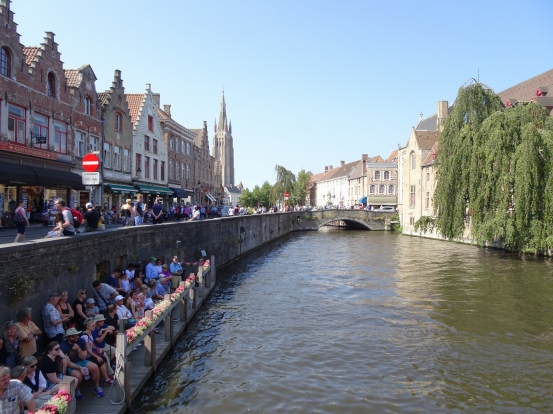 More queues for boats – on such a beautiful day, we couldn’t have asked for better weather.

The main market square, which is the heart of Bruges, is just around the corner. 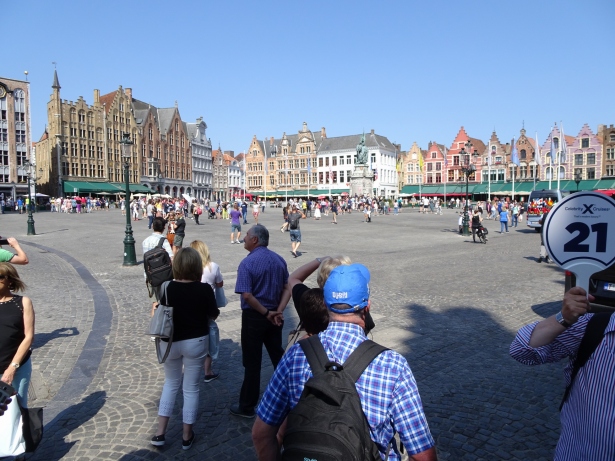 The market square reminded us of Ypres, which is not surprising as Ypres is also in Belgium.

Our choice over the boat trip – Belgium beer tasting. Must admit they were generous with the pouring – 150 ml in each glass. Of course Maureen couldn’t dink hers because it wasn’t gluten free, so being kind hearted I helped her out . . .

The first glass was 8% alcohol – and the guy in the red shirt (standing) gave us a chat about the beer and how it was made on the premises.

The next one, a different taste,was 6% and the final one, again a different taste, around 4.5% – a very pleasant lunch break. The brewery supplied cheese nibbles between the tasting of each beer to clean the palate. 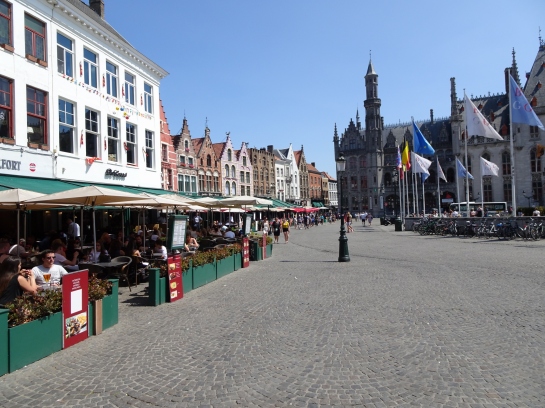 After the tasting we had free time for a wander around the market square. The market started in 958 and is still going every Wednesday.
From November each year it becomes an ice skating rink and a Christmas market.

Plenty of cafes and restaurants.

The statue in the square is of Jan Breydel and Pieter de Coninck , the two heroes from 1302 who were involved in the uprising and massacre of the French occupying forces.
In retaliation the French king, Phillip IV, sent an army of 8000 troops, which included 2500 cavalry.
The civic militia was raised in Bruges, and the surrounding towns. When the two armies met the French sent in their heavy cavalry, but they failed to break the armoured and well trained militia.
The battle ended in a French defeat and many of the knights, including the French leader were killed. At the end of the battle the Flemish soldiers collected five hundred pairs of spurs, which is why the battle is called The Battle of the Golden Spurs. The spurs were offered to the church.

Across the square from the restaurants is the Belfort Tower, which is a belfry.

There are 366 steps to climb to the top, via a narrow staircase (with two-way traffic), so you have to be fit and perhaps younger than me to complete the climb. I’m told that the view on a clear day is fantastic. The lower areas are 13th century.
The carillon of 47 bells weigh from 0.9 kg to 4,989 kilos per bell, making a total weight of all the bells of 27,500 kilos. Chimes of Bruges – is about three minutes and also includes views from the top.

We enjoyed our time in Bruges, and only wished we’d been able to stay longer. It is a town where we’d liked to have stayed locally for a few nights, to see more and to experience the area outside of the town. But we had to get back to the ship . . . .