Where ever we went in Southampton we came a cross history, whether from a few years ago to over a thousand years ago. 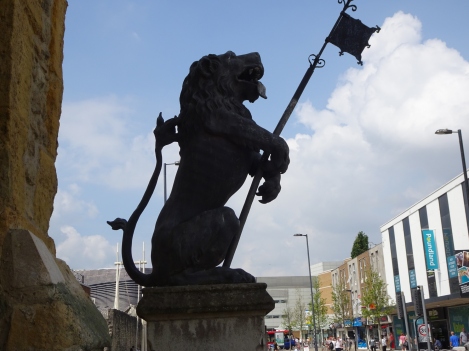 He still guards Bargate, and watches over the peace of the town.

The town has been in existences from the Stone age, through the Bronze and the Iron age.
It was called Clausentum by the Romans from 43 to 410 AD.
When the Romans left the Anglo Saxons came, and referred to the town as Hamwic or Hamtun, both names referred to the same area. Excavations have revealed a street plan of Hamwic, and further excavation found one of the best collections of Anglo Saxon artefacts in Europe.
In the 11th century the Anglo-Saxon chroniclers referred to the town as South Hamtun.
England was split due to warfare, and the Viking king, Canute, was crowned in this town, (the other part of the country chose Eadmund, who ruled in London). It is thought that it was in Southampton waters that Canute ordered the sea to halt.
His action was to prove to his courtiers that he was not divine, but only human. Over the years he has been portrayed as arrogant to think that he could stop the tide, when in fact he was proving that he wasn’t divine, and that only God had the power to still the waters.

King Canute’s name was also spelt as Cnut, but I don’t know where the ‘Knut’ originated. He was crowned King of England in the old St Pauls cathedral, London, in 1017. He was also the King of Denmark and Norway. 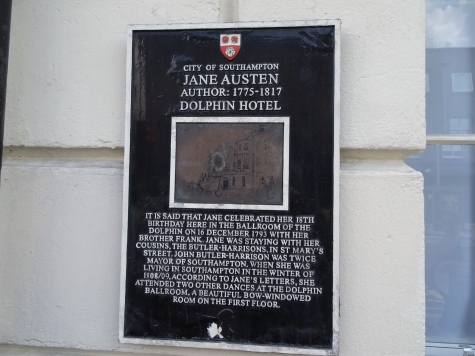 A short walk further on from Bargate we came across the Dolphin Hotel where it is said that Jane Austen celebrated her 18th birthday on the 16th December 1793. Later she lived in Southampton from 1808 to 1809. The home in which she lived has gone and on the empty plot a pub was built.

It looks Tudor and older than it is, I think it was built around 1870. 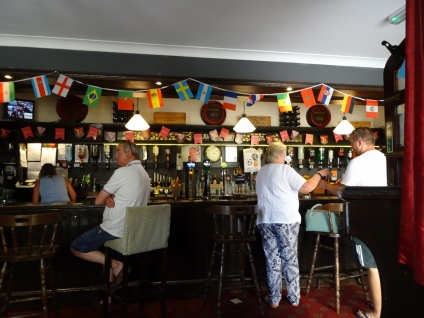 A view inside the current pub, the flags were for the football competition in Russia.

Not too far from the pub is an old church dedicated to the members of the Merchant Navy. It is called Holyrood church and is known to be in existence during the reign of Henry II in 1160. It was originally built at another location, but in 1320 it was demolished and rebuilt at its present location. It has been a place of worship for the Crusaders, soldiers heading to Agincourt, and Phillip II of Spain in 1554 when he was travelling to Winchester to marry Queen Mary.

After being refurbished in 1851 it could seat 974 people and regularly Sunday services had 462 in the morning and 405 in the evening.

It was during the night of the 30th November 1940 that Southampton was bombed by the German air force. The following morning Holyrood was in ruins.

It is now a memorial church to Merchant Seamen, because it has always been linked to sailors. Southampton lost 538 of her seaman when the R.M.S Titanic sank. Of approximately 900 crew on the Titanic, 685 were from Southampton.

The plaque on the wall near the anchor. 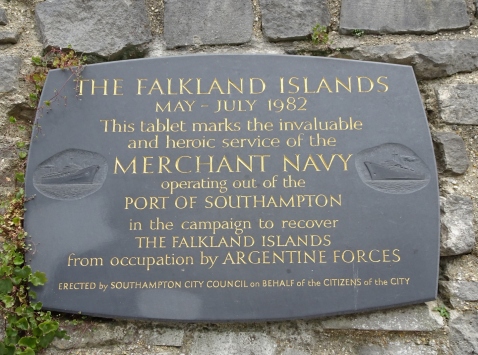 On the pavement at the front of the church is this anchor from QE2, she is still afloat and has been converted to being a hotel on the waterfront in Dubai.

During the bombing the lectern from Holyrood was rescued as the church burned. 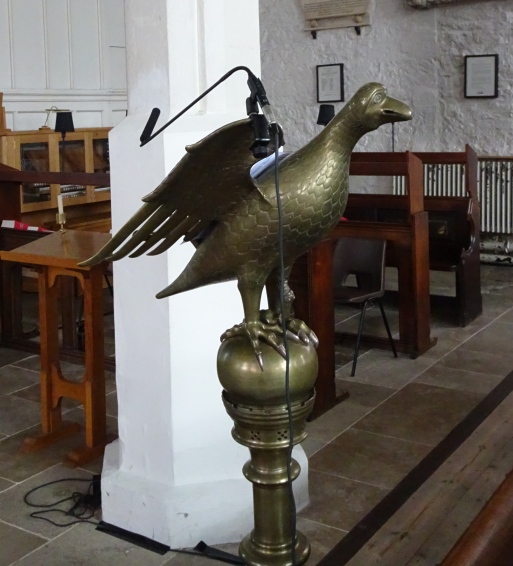 It is the oldest brass eagle lectern in the country dating back to around 1420. It took two men all their strength to carry the lectern to safety, and is now used in St Michael’s church. The jewels are missing from its eyes, and there is some damage on its wings. During the English civil war it was painted brown to look like wood so that it wouldn’t be melted down. 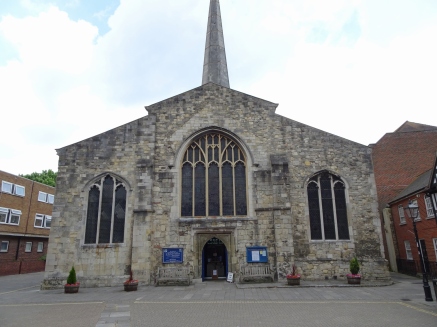 St Michael’s church, a block away from Holyrood, St Michael’s is the oldest building still  in use in Southampton.
The church was founded in 1070 AD and still has Sunday services today

The view inside St Michael’s

I saw this model of the ‘Mayflower‘ in St Michael’s church.

The link is that the Pilgrim Fathers sailed from Southampton. In 1620 the Mayflower  anchored in Southampton water waiting for her consort Speedwell, which had sailed from Holland with more Puritans.
The two vessels set sail for America in August, but shortly after, the Speedwell sprung a leak and the two ships put in to Dartmouth for repairs.
Repairs completed and they sailed again for the Americas. When they had sailed about 200 miles from Lands End the Speedwell sprung another leak. Both ships returned to Plymouth.
Some of the passengers off the Speedwell moved to the Mayflower and others returned to Holland. On the 6th September the Mayflower sailed for America, later Speedwell was sold.
On the 9th November 1620 they sighted what we now know is Cape Cod. The rest is history. 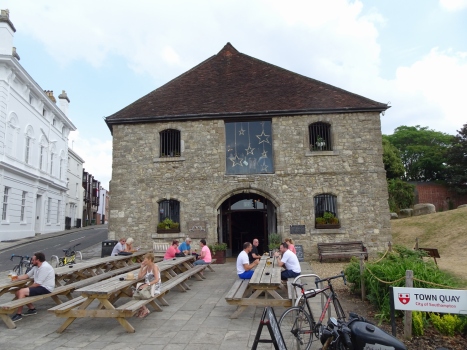 This was our destination close to the waterfront.

The brightest part of the day is that this Maritime Museum had changed in to something else. It has become a micro brewery called the Dancing Man.

The Dancing Man brewery began in 2011 and in 2015 they moved in to this building.

Restaurant upstairs – bar downstairs, or outside in the sun. 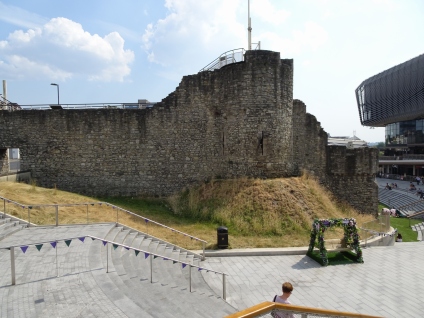 We were never far from a touch of history. The above shows the original walls of the old town. On the right the modern building is a shopping centre.

Even inside a shopping centre they had created a feeling of yester-year. I took the photograph and behind me were very modern shops.

It was school holidays so what did we used to do – we went to the seaside.

Beach Rules but where is the beach?

Is it only the British who sit in deckchairs row after row?

This beach was on the main road in Southampton, miles away from the water and the ships. 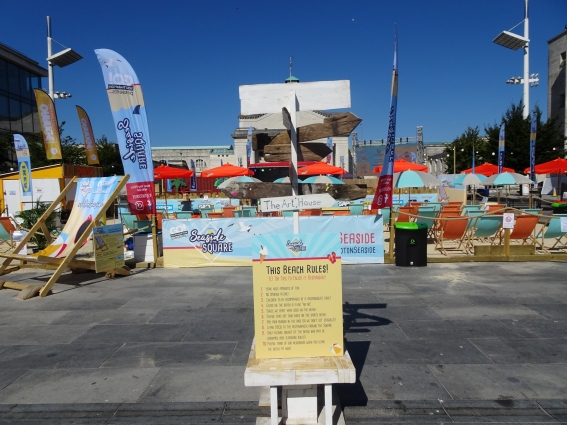 Sand had been spread across what I think was a small square in front of the building with the white roof that can be seen. The large deckchair on the left was part of a competition of about eighteen large deckchairs spread throughout the main old town area and one had to track them down and tick them off a list – we didn’t get involved.

One thought on “Living history”