The last night of the cruise – don’t know how many balloons they go through in a year, because there is a big ‘bash’ at the end of every cruise.

We’d left Akita and headed north east through the night and the following day, which was a sea day.
During the night of the sea day, which was the last night of the cruise, we entered the straits of Tsugaru Kaiko, around 1.30 am, not being a night owl z z z z z I just believed what I was told.
The Tsugaru Kaiko Straits divide the rest of Japan from Hokkaido Island, and around 3.15 am we cleared the straits, entered the Pacific Ocean, and headed for Yokohama.

Morning arrival in Yokohama – later we would cross the bridge shown in the picture.

In the evening of the last night we were asked to leave our heavy luggage outside our cabins. This luggage was removed during the night and the next time I saw it was in the passenger terminal. The whole operation was extremely efficient, we picked out our luggage, after which we were shown were to go for the coach to the airport. We just followed a guide and boarded the bus as our luggage was stowed underneath.

Princess Cruises offered a shuttle service (for a fee) to both airports, Narita and Haneda, but we picked Narita, because our flight would be leaving from Narita the following morning.
On researching the best way to get home I realised that we would not be able to make any morning flights from Narita on the morning that we left the ship, and that we would have to stay at an airport hotel overnight.

We crossed the bridge after which we encountered traffic.

Most of the way we were in a convoy of slow traffic and it took us two hours or more to get to Narita, which is about 100 km or 60 miles. At least it confirmed that staying over night for the following day’s flight was the correct decision.

We stayed at the Narita Airport Rest House, which was only a few minutes from the airport and the price was ‘right’ at AUD $110. The room was a good size, and it was clean, as was the bathroom, and you could see the planes but not hear them, perfect for a quick overnight.
We booked a couple of seats on the 6.30 am shuttle (five minute ride) to the airport. On arriving in the foyer at 6.00 am we were just two of quite a few. We were early, because I had a feeling that the bus might well be full at 6.30 am. The driver waved to us and we all climbed aboard and we left at 6.10 am – initiative and efficiency, because the driver would be back in time to make the first run of the day at 6.30am.

On entering Narita Airport we were surprised at how quiet it was, so we found our check-in area and realised that the airport didn’t open until 7.30 am!
I’d never experienced an airport operating on office hours. Last year we checked in at 4.00 am for a 6.00 am flight out of Sydney, and we consider Sydney to be a ‘terminus’, with a curfew, but Tokyo’s Narita would be a 24 hour airport, or so we thought.

There were plenty of very quiet planes.

After checking in, because we were business class, we were given an invitation to the lounge. We were given a map along with our invitation – it took us a good twenty minutes to get anywhere near the lounge, and we still had to ask in the end. The airport is huge!

We were at gate 93, and passed four lounges (for the same airline – JAL) before getting anywhere near Gate 93 and the lounge allocated for this area. The exercise was good for both of us . . .

Because of our early start we hadn’t had breakfast, so the spread was very welcoming. The blackboard is advertising some sort of food along with Mount Fuji, but self serve was better.

The lounge was very nice and quiet and had good internet reception. 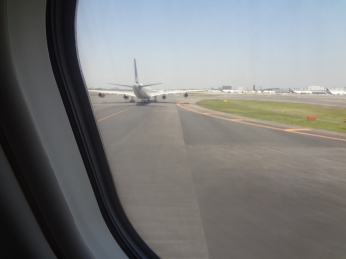 Follow the leader for take-off to Kuala Lumpur, we were flying with Malaysian Airlines. 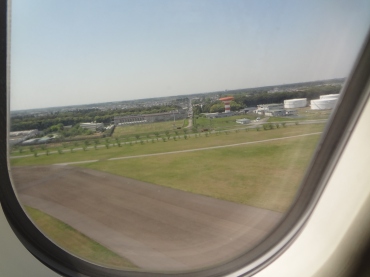 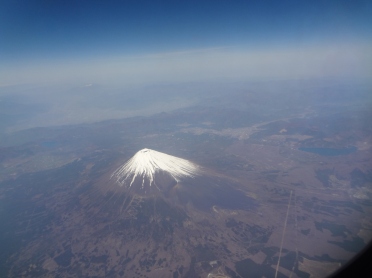 One  last shot of Mt Fuji as we left Japan behind. 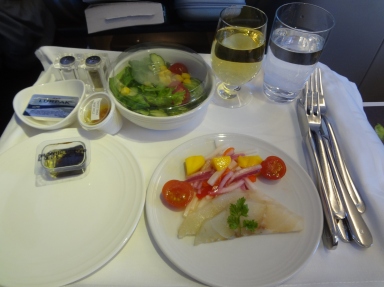 Lunchtime – my starter, smoked fish, thought I’d do the right thing because I wanted the meat dish for the main course.

Very apologetic cabin member (can’t say stewardess anymore), said that they had run out of the meat, but I could have the poached haddock.

Because we don’t like night flying we decided to stay over night at the Kuala Lumpur airport hotel, the Sama Sama, which is a lovely hotel, having stayed there a few times.

Typical Premier Room, which gives you access to the Executive Lounge.

The advantage is that it includes food and drinks from 6 to 8 pm. By the time you’ve picked through the offering you don’t need an evening meal. 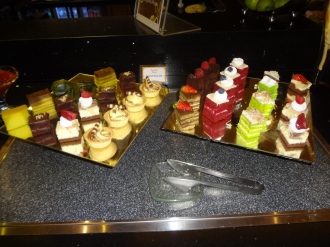 The following morning we check-out of the hotel and checked in for the flight to Sydney – daylight flight 9.00 am to 7.00 pm. Our ticket entitled us to visit the Golden Lounge, which is the name of Malaysian Airline’s lounge in KL.

It has all been refurbished 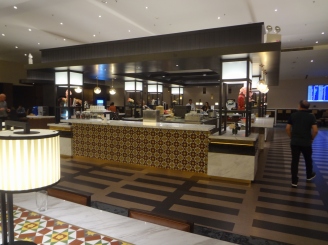 Hot food to order –  just ask for the type of omelette you want and the chef makes it . .

Various types of food for breakfast from western to Asian; hot or cold.

Brunch on the plane.

I was waiting to be told that my main course was not available  . .

I should have had more faith – Nasi Lemak, one of my favourite Malay dishes.
Spiced just right for me – I like spice.

Getting close to home – the wide open spaces of Australia. 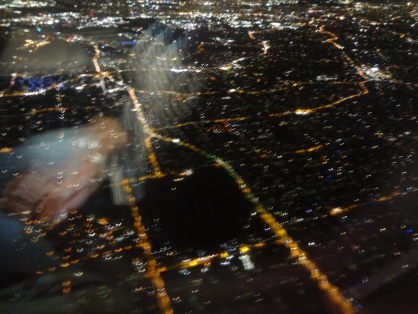 Strapped in the seat for landing and held the camera onehanded across Maureen – must do better next time – give the camera to Maureen, I can be an idiot when I try.

Just for my Sydney readers – from walking off the plane, through immigration, collected bags, through quarantine and outside waiting for our lift home – 20 minutes!!

About 7.00 pm on a Sunday night – never had such a fast arrival.