We docked alongside a working port called Phu My (pronounced Foo Me) in Vietnam.
The port is about a 90-minute bus ride to Saigon, now called Ho Chi Minh. Many of the locals still refer to Ho Chi Minh as Saigon.
The Diamond Princess was too large to sail to Saigon, so we had to dock at Phu My. Maureen and I had holidayed in Saigon some years earlier, so the thought of a three hour round trip was not an attractive option. We decided to stay on the ship.

While scrolling through Cruise Critic because others who will be sailing in the Diamond Princess often have comments about previous cruises, I came a cross a couple from Yorkshire in the UK, who were doing a private tour of Long Tan at a cost of USD $60 each, which would drop to USD $40 if there were six people or more in the group.
I e-mailed the couple that Maureen and I would like to join their tour because my daughter’s father-in-law had been involved in the battle of Long Tan in 1966.
Although born an Australian, he was working in New Zealand when he volunteered for the New Zealand army and ended up as an artillery man in the Royal New Zealand 161st battery, which, along with Australian artillery, supported the Australian infantry during the battle of Long Tan.
It is recorded that the combined artillery fired 3500 shells during the three-and-a-half-hour battle.
108 Australian soldiers were pinned down by an estimated 2000 Vietnamese troops. 18 Australians were killed and 24 wounded. It is estimated that close to a 1000 Vietnamese were killed in the action and 3 were captured. The official figures for the number of Vietnamese killed is set at 245 killed and 350 wounded.
I can not do justice to the troops involved if I was to try and describe he battle, so I suggest those interested use this link Long Tan battle for an over view.

If you wish more details watch this excellent documentary of Long Tan, with many interviews with those who took part in the battle

The local town of Ba Ria, about ten kilometers from the port of Phu My, offered a free shuttle service from the Diamond Princess passengers to a local shopping centre, which was to be the meeting point of our guide for the Long Tan battlefield.
We didn’t have to wait long at the meeting place before a ten-seater air conditioned mini-bus arrived to transport us (five couples) to Long Tan.

Glenn Nolan (retired Australian soldier) was to be our guide. Glen had married a local girl and owned a bar and restaurant called Tommy’s Bar. His knowledge of the battle and the back grounds of many of those involved was encyclopaedic. He chatted all the way to Long Tan with anecdotes and information of the places through which we travelled. Having served in the Australian army about five years after the battle of Long Tan, his personal experiences added to the enjoyment of listening to him.

Fifty-two years ago, this area was the HQ of the Australian forces in Nui Dat, photo taken 2018.

Fixing things after a monsoon rain storm.
The above three photos are copied from Contact Magazine.

On the night of 16/17th August 1966 the Vietcong mortared the base at Nui Dat and wounded 24 men. The following morning (18th August) a patrol from the 6th Battalion of the Royal Australian Regiment (6th RAR) was sent out to locate the firing position of the Vietcong.
Click on the links above to find out what happened next.

From Nui Dat it was a short ride to the area around Long Tan. We passed what used to be a runway.

When I took this photo, I was standing at the end of the runway as it stretched in to the distance. Don’t forget the runway was in use 52 years ago, and the vegetation has grown since. 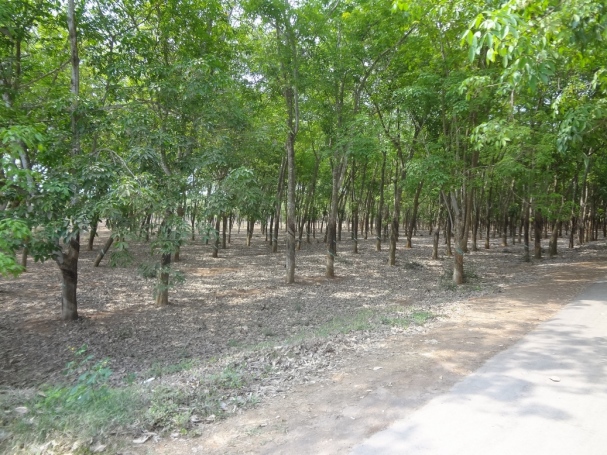 Rubber plantation near Long Tan. This was the terrain in which the battle was fought. 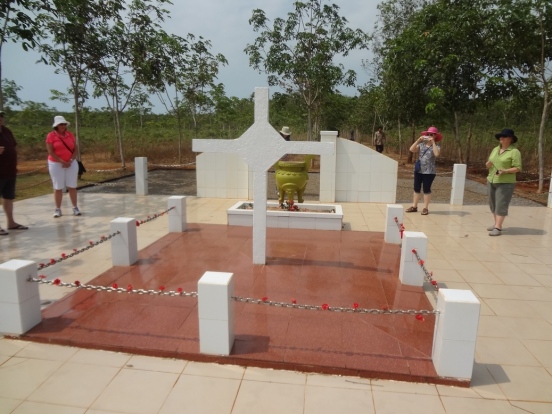 Memorial at Long Tan – only two foreign memorials have been allowed in Vietnam, the Australian memorial here at Long Tan, and the French memorial at Dien Dien Fu. The French lost their battle in 1954.
There used to be a plaque commemorating the battle of Long Tan, but the plaque has been stolen from the centre of the cross. 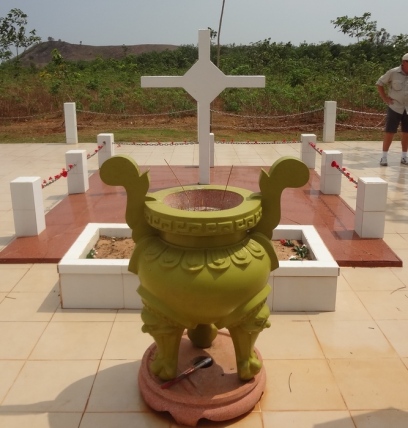 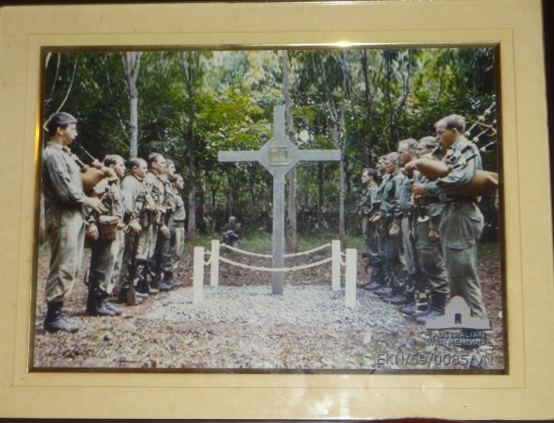 I photographed a memorial photograph taken during the 50th anniversary of the battle. 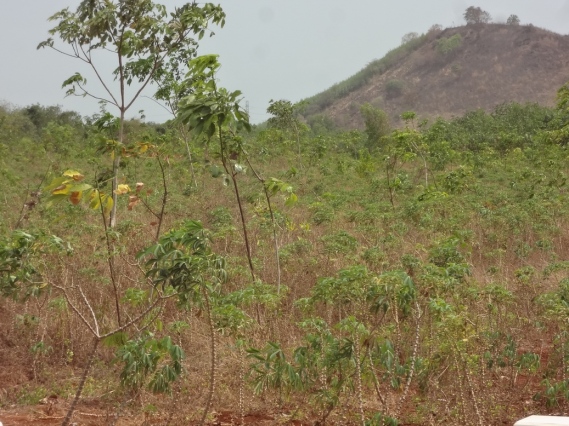 This is the area where the battle took place. In 1966 it was a rubber plantation and the Australian were hard pressed to hold off the attack.
It was monsoon season and it rained so heavy that the rain hitting the ground causes a half meter high mist to form, which made visibility very poor.
The Australian and New Zealand artillery were dropping their shells fifty meters in front of the Australian lines in an effort to hold off the constant attacks.

Current pathway from the road.

As we left we watched famers harvesting their crop of tapioca – a much more peaceful scene than in 1966.

Minh Dam Mountain Memorial, to the soldiers from this area.

The mountain area was a honeycomb of caves and hideouts for the Vietnamese guerrillas that operated in the area to destroy the American and Australian troops. Bombing by B-52 bombers failed to dislodge the guerrillas. 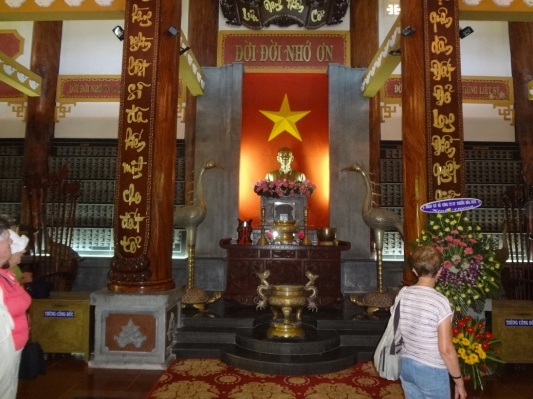 All around the walls are those who lost their lives. 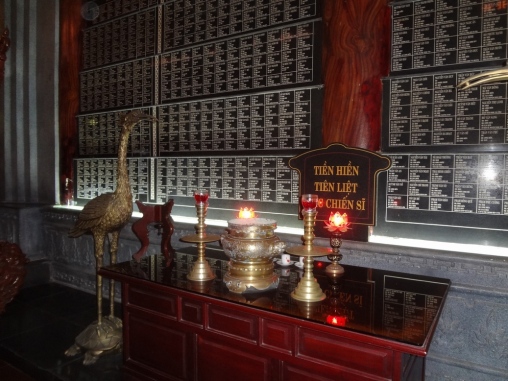 There were thousands of names. 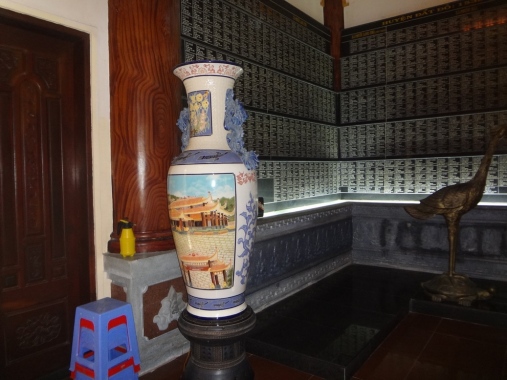 An interesting place to visit, except that the monkeys would throw rotten fruit at visitors. Perhaps they blamed us for the bombing. 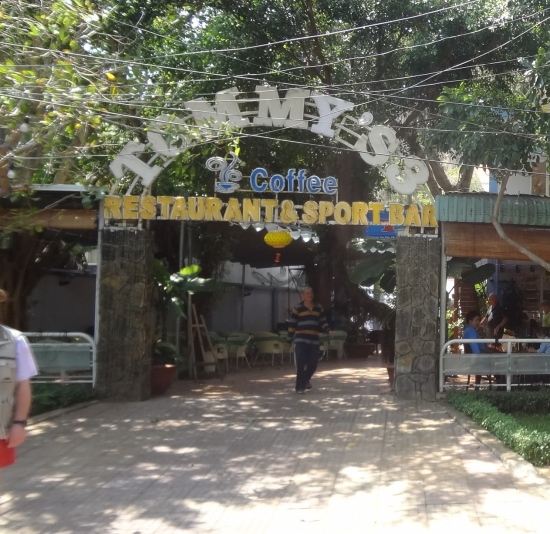 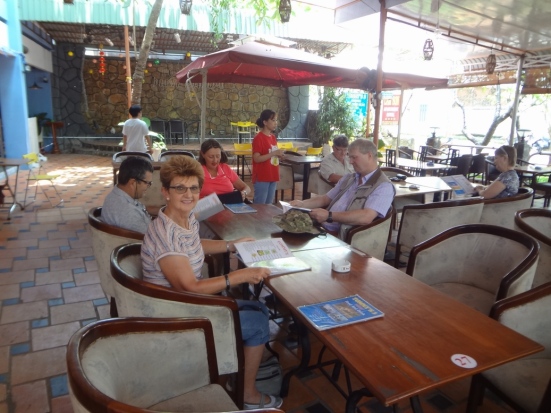 All the food on the menu (a mix of western, & Asian) was cooked to order by Glenn’s staff, over seen by his wife.
Maureen and I had a main course each, and soft drinks for Maureen, and a couple of draft beers for me, and the cost was AUD $23, excellent value.
After lunch it was back to the ship via the scenic route.

A day out of site seeing, education, and memories, what more could you want for USD $40 / person?

One thought on “Long Tan”