Three guesses for our next destination. I was eighteen when I first visited Japan and have always wanted to take Maureen, so when a positioning cruise came up, at the right price, – I booked Diamond Princess.

We sailed in the Diamond Princess from Sydney to Singapore in 2016 so hopefully it’ll be like coming home. If you like days at sea, which we do, look for a positioning cruise because they are nearly all cheaper than a standard cruise, as long as you don’t mind flying home. 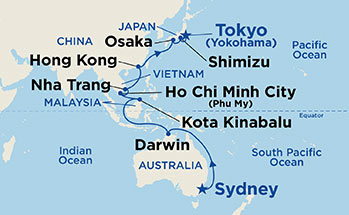 Once in Yokohama many of the passengers will leave the ship and be replaced by a large number of local Japanese for a coastal cruise, which will also call at Busan in S. Korea.

When I made the booking I offered to the cruise company that we would do a back to back i.e buying a further cruise, as long as we didn’t have to move cabins.  They agreed, so we have extended our time onboard by a further seven days for the coastal cruise.

We sail from Yokohama to Busan (S.Korea), Sakaiminato (Japan), Tsuruga, Akita and finally Yokohama where we leave the ship and fly home.

I’ve not been to S. Korea, nor the western side of Japan, so this trip will be new for both of us.

The passengers will be predominantly Japanese, so it should be an interesting trip. I’ve been dragging the old grey matter in an effort to remember a few polite Japanese greetings. When I was at sea, the company for which I worked, traded between the Persian Gulf, Japan & China so I made a point of learning some Japanese and Cantonese. The Cantonese didn’t help much on the China coast, because they didn’t speak Cantonese outside of Hong Kong!

We are hoping that we will be able to repeat the pleasant time that we had in 2016, when sailing from Sydney to Singapore. I doubt that the same piano player, Paul Burton  will be still around, he was very popular.

This will be our second Easter at sea, and on the same ship – 2016 Good Friday was 25th March, which was in Melbourne, and this year it is 30th March, when we will be at sea.

Easter Sunday 2016, was in Adelaide, and this year we will still be at sea. It’ll be interesting to see if Easter at sea is acknowledged as a Christian celebration, or just a choco-holiday. 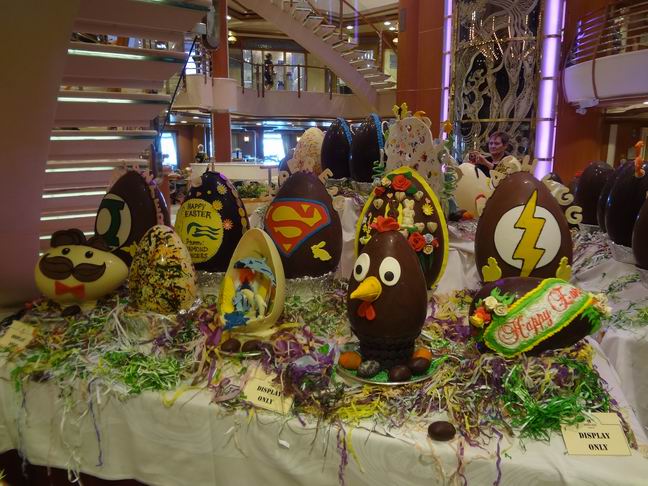 The picture shows 2016 Easter on the Diamond Princess, but as the ship was in port, passengers had the choice of churches in Melbourne & Adelaide.

7 thoughts on “Diamonds of Japan”