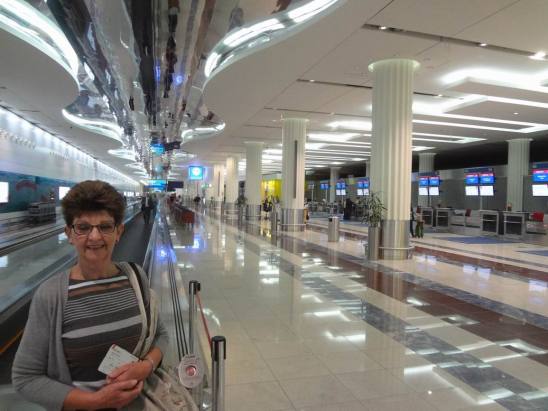 Breakfast was in the hotel, after which, we were ferried by private Emirate Airline car to the airport, for the final leg of our journey to Rome.

We passed through emigration & security & boarded a train for the short ride to the satellite area.
Once in the satellite area we approached the bank of lifts that took us up to the ‘boarding’ area – which was also the shopping area and airline lounges. 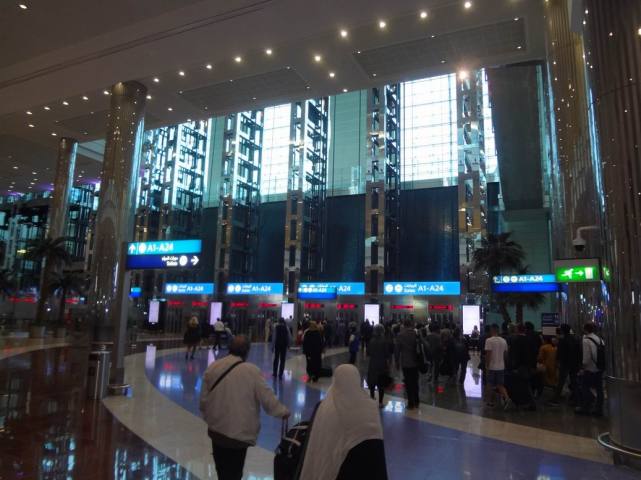 Behind the lifts they had computer controlled fountains to keep you amused while in the lift  . . .

Once inside the Emirates business class lounge we realised how large this area is in comparison to Emirates Sydney – it was huge.

Just one small area of the lounge which contained much of the food and drink.

Dedicated area to Gate A 12 (our departure gate), which is within the main lounge area.

Power and internet sockets at every seat – if you wish a waitress will bring you coffee, just ask.

A view of the public shopping area below – picture taken from within the business class lounge.

When called we made our way to boarding.
Once again, we had ‘staggered’ seats – I was behind Maureen, for the much shorter flight of six hours to Rome. 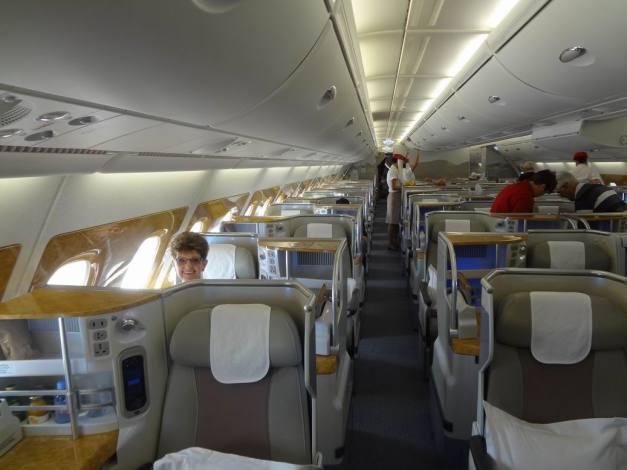 As expected we were offered Champaign, along with menus for lunch.
The airport was busy so we had to wait our turn before turning on to the runway for our take-off.

View from the nose camera as we made our take-off run.

This was followed by chicken Baharat, with Arabic seven spice – the problem was that I forgot to photograph the main dish, and the sweet course, before eating.

But the above shows that I liked the pudding . . . . before the coffee.

On arriving at Rome Airport we found our way to the Emirates chauffer area where we met our driver, and because we were not staying in Rome city, but in Civitavecchia, which is the port for Rome, we had to pay an additional fee for the excess kilometers to the port. Considering the cost of a taxi and the level of service I was ‘happy’ to pay the fee. The driver kept a steady speed of about 130 km per hour (81 mph), so the whole trip only took us about 50 minutes.

The trip was very smooth, comfortable and virtually soundless, so conversation within the car was easy.

One thought on “Dubai to Rome”