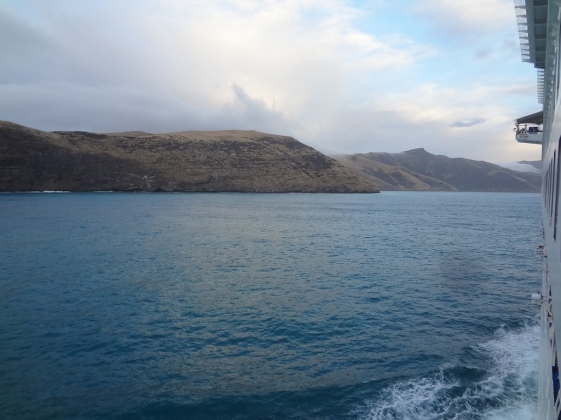 Our ship anchored off the small port and used the ship’s tenders to get the passengers ashore. 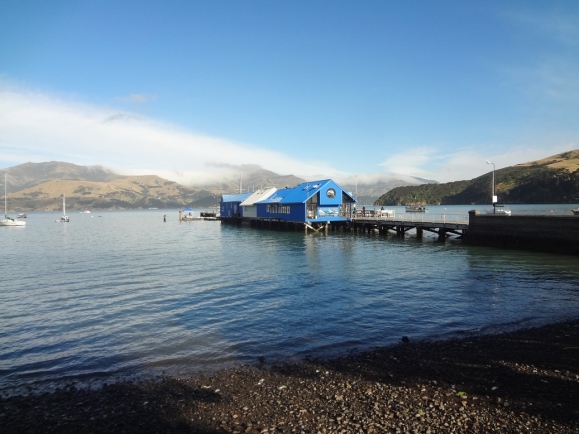 The wharf where we were dropped off by the tenders.

A beautiful area where I just couldn’t stop taking pictures – I only wish my photographic skill had been better.

I’d booked a local travel company to show us around – one because he was cheaper than the cruise company, and two because his mini-bus could only take about eight to ten people, so getting on and off would be a lot quicker and the driver / guide would be a lot more personal than on a fifty six seater coach.

During our trip I found out a little about the area.
Jean François Langlois, was a Frenchman who made his living in whaling.. He ‘bought’ tracts of land from the local Maori people for about £6 worth of goods, and later a further £234 worth, before returning to France to sell land in lots to French migrants. When all had been sold he and his migrants set sail for New Zealand.

In the meantime the British had found out about the plan and they claimed the area around Akaroa as British territory – par for the course at that time.

Anyway, on their arrival the French migrants decided to stay and Akaroa now has a strong French influence even after 180 years .

Street names have a mix of English and French. 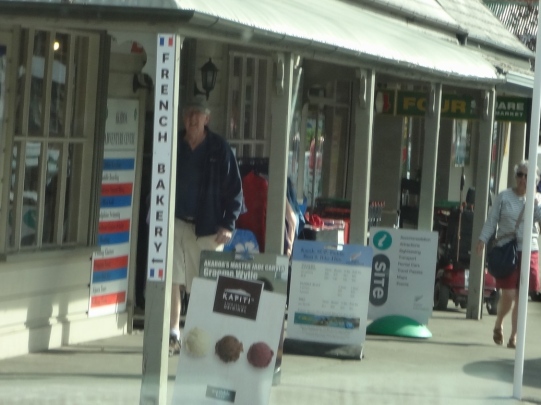 French baker and the French flag can bee seen flying over various buildings.

Even the local police station has a French influence, but with Kiwi policemen inside.

Many of the decedents of the original sixty three French emigrants still live and work in Akaroa, and their family names have not been anglicized.

Along with the Dawn Princess the Seabourne Encore was also anchored in the harbor. 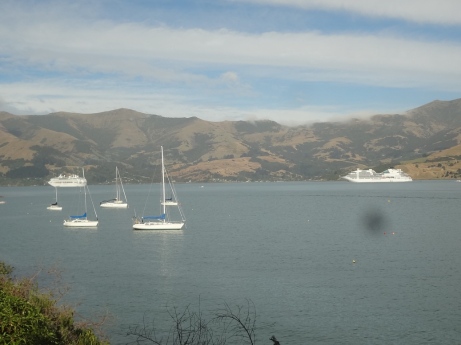 Dawn Princess on the left and the Seabourne Encore on the right.

Our mini-bus had to wait for a couple of passengers off the Seabourne Encore so Maureen and I had a look around.

The lighthouse is now a museum.

A little warmer than Wellington! Picture taken from the lighthouse looking back to the wharf.

On leaving Akaroa for Lyttelton, before making our way to Christchurch, the route took us around the furthest point that the harbor stretched inland. As you see the tide was ‘out’.

A short time later we began the climb to cross the local hills that surrounded the harbour.

Taken from the bus as we climbed – the picture is looking back at Akaroa harbor. 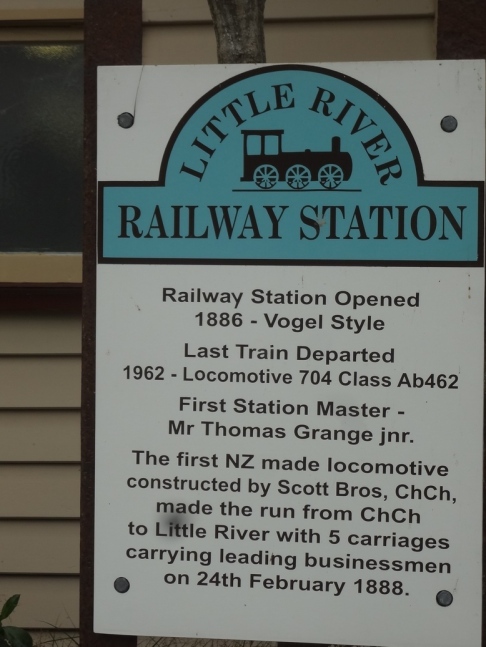 The work man was maintaining the museum piece – the station is close to trains. 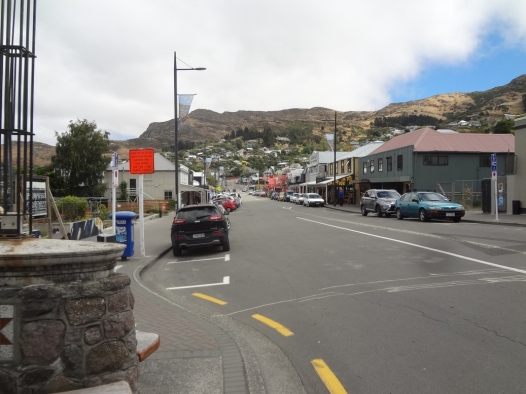 London Street in Lyttelton today – the town was knocked about by the earthquakes, which is why cruise ships no longer call here. I was last here in the late 60’s and only had vague memories of this street until I saw a large photograph on a board. I took a photograph of the photograph.

This I recognized – a pub that we used to visit.

The pub was demolished, (the above shows what it left) due to it being damaged after an earthquake. I read that the after shocks caused more damage to this building than the actual earthquake. The pub was over a hundred years old when it was damaged, but the cost to restore it was too high, and leaving it was a threat to public safety. 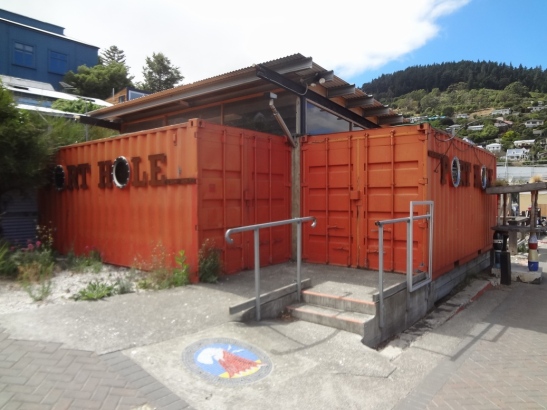 This is now a bar called the ‘Port Hole’ – made from two shipping containers – not sure if it is still in business.

On the road out of Lyttelton we passed The Mitre Pub,  (see photo below) which was the closest pub to where we docked when I was at sea.
At the end of a day of working cargo, and the shore-side ‘Dockers’ had left,  we used to visit this pub and we would often see some of the crew off a Danish ship of the Maersk Line.
I think the Maersk Line ships were ‘dry’ i.e they were not allowed to drink alcohol while on board, so when the crew went ashore . . .  let’s just say they were noisy.
After a few beers the singing would start and the one song they would always sing was  Maersky Submarine – they replaced the word yellow with Maersk – funny how certain places bring back memories.

I wouldn’t mind, but Marsk Line ships didn’t have any yellow colouring.

Leaving Lyttelton we used the tunnel through the hills rather than climbing the hills, to take us to Christchurch.