On our arrival in Lisbon I phoned the ‘greeter’ to let her know that we had arrived and that we were queuing for a taxi. As we reached the front of the queue I indicated that we required a large vehicle to accommodate four people and all our luggage. The vehicle assigned to us resulted in a shouting match between the driver and the taxi rank ‘organiser’.
The driver was eventually persuaded to accept us as his fare. To a point, I sympathised with the driver because he was concerned that he couldn’t see out of his rear window, due to our bags. We left the airport and I handed over a printed card with our address. The driver thought that we wanted a hotel, not an apartment, and this threw him in to a right ‘tizz’, because he didn’t have any idea of our destination, which was only ten minutes drive from the airport. I ended up ringing our ‘greeter’ and putting my phone on loudspeaker so that our ‘greeter’ could direct a very unhappy taxi driver to the correct address.

I’d booked the apartment via Flipkey, which uses Trip Advisor as the link. Our ‘greeter’, Filipa, met us and escorted us to apartment number nine on the 17th floor of the apartment block. The apartment was two stories, the bedrooms being upstairs.

The living area was a combined lounge / dining area with the kitchen separate, but still part of the dining area. Outside we had a balcony with a table and chairs. The rails on the balcony reminded me of a ship’s rail. We overlooked part of the city and the Tagus River.
The photograph at the top of this page is of our apartment block, which was built on top of a shopping centre called Vasco de Gama Mall, so we didn’t have far to go to buy our food.

As we walked in the front door the stairs are on the right, and on the left, is the door to the Kitchen.

Picture taken from the dining area.

In front of us is the living room and near the window on the left (out of picture) is the dining table.

This time our friends had the en-suit bedroom, and next to our bedroom (see below) was the main bathroom. The blinds were electrically operated and we kept them low for coolness, although we did have air-condition throughout the apartment.

Happy hour was always on the balcony – cool breeze off the water, beautiful views as the sun set – what more could I want?

The rails on the balcony reminded me of a ship’s rail. (Picture from the agent’s web site).

Being seventeen floors high we had some great views.

Cable car along the water front.

Getting about Lisbon was very easy via the underground (metro) system. The route from Oriente station (our local station across the road from our apartment) to the city centre was an education. 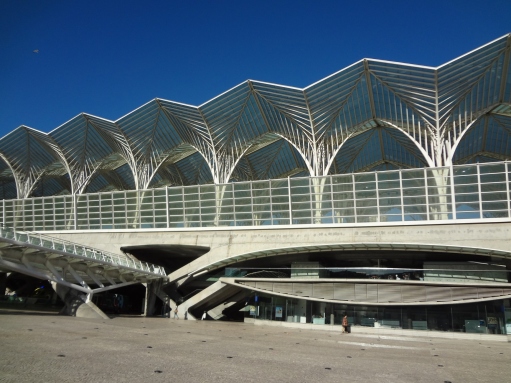 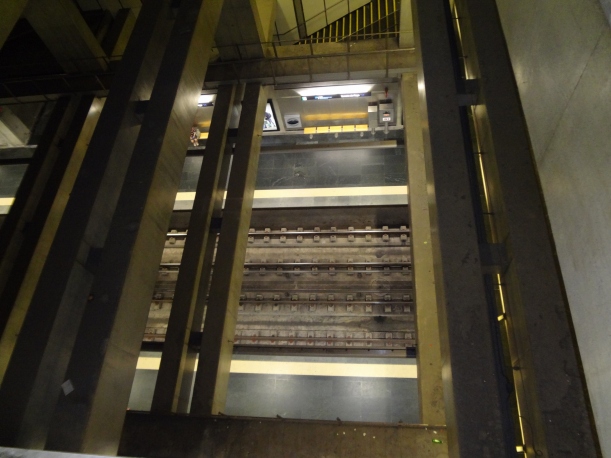 The station is very impressive and once inside and we made our way to the platforms we could see the train coming in below us. 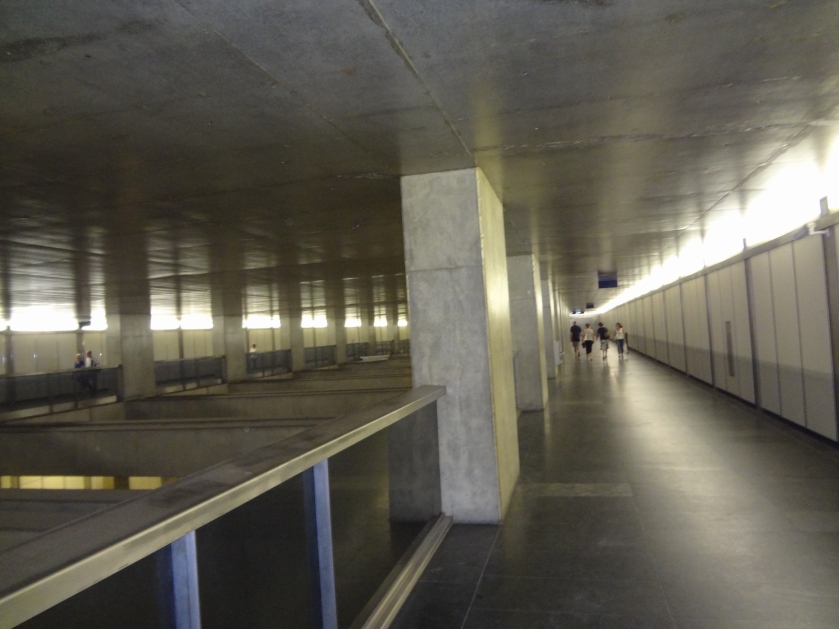 Inside Oriente Station as we walked to our platform. It was spotlessly clean.

Many of the stations had a different ‘art’ theme, which we found very interesting –

This was our local station – not a single piece of graffiti or rubbish.

Further down the line the motif reminded me of Greek colonnades. 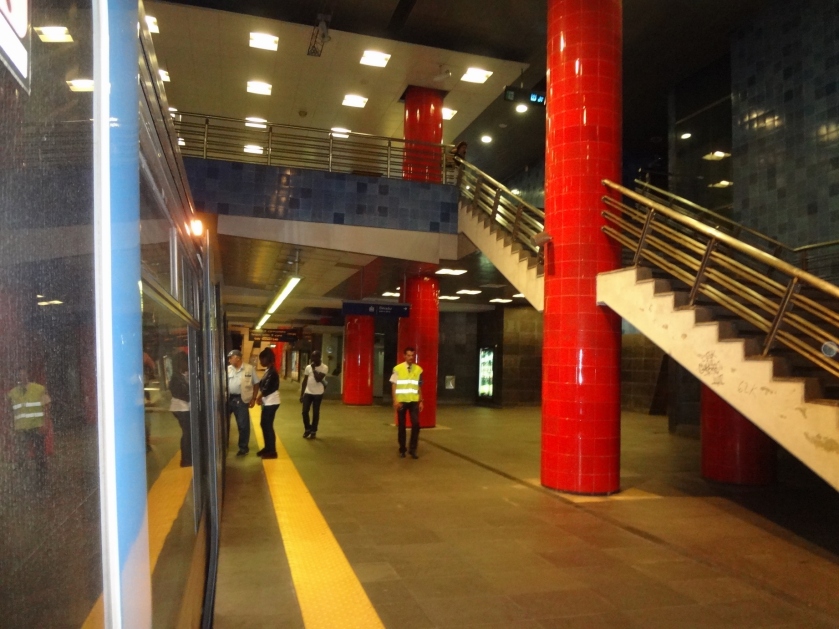 Something different again later in the short journey to the city centre.

If we ever return to Lisbon I’d do ‘self-catering’ again and use the same apartment, because of the convenience to the metro, shopping for necessities, which can cut in to holiday time, and along the river there are many different restaurants and bars. The river was five minutes’ walk away.

Getting rid of the rubbish and empty bottles was quite noisy, although we never heard the noise of anyone else getting rid of their rubbish and bottles. At the end of the public corridor on each floor was a rubbish shoot – one for rubbish and one for cans and bottles. The rubbish wasn’t a problem, but once we let go of a bag full of glass bottles the noise, as the bag or single bottle bounced down seventeen floors, was tremendous, and we quickly closed the outer door in an effort hide the noise.
Nobody ever complained, and as I said earlier we never heard anyone else’s rubbish ‘noises’ so why would they hear ours.
When it was my turn to do the dropping I used to time the beer bottles against the wine bottles . . . .Newton’s Law. My watch wasn’t accurate enough to note the difference.