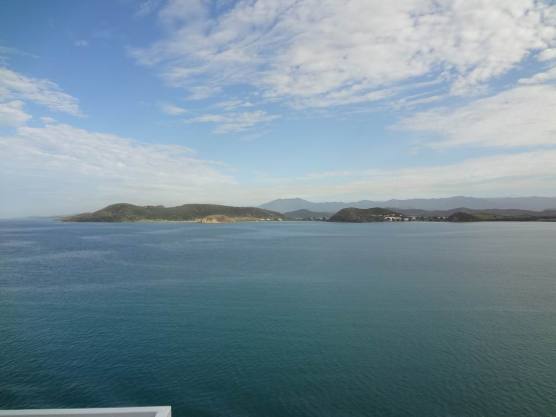 Island in the sun

Local yacht club – last time we visited New Cal we had lunch in this club and I can recommend their lunchtime pudding, which was a large bowl of ice cream floating in a sea of Tia Maria

Being welcomed by a local dance troop. 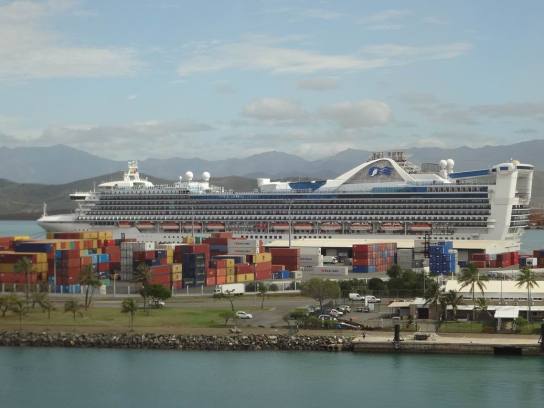 Golden Princess berthed at the container port – launched 2001 at 109,000 gt compared to Pacific Jewel, launched 1990 at 70,300 gt. Being that much smaller we were allowed to berth at the cruise terminal. 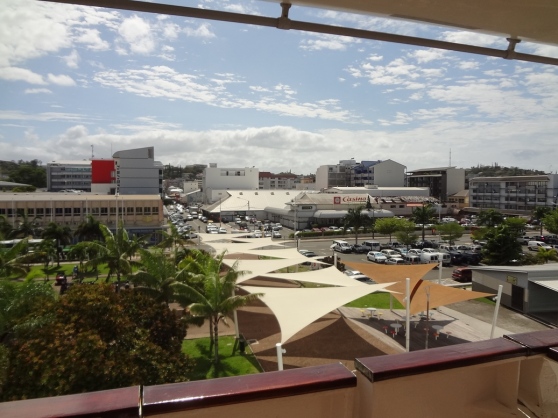 Views of the city.

Passenger road trains run around the city and the beach area. I think the colour of the train denotes the area.
Maureen & I didn’t go ashore because we’d been to Noumea a few years earlier and I doubted that it would have change all that much. Being on an ‘empty’ ship is a pleasure – smaller crowds, easy to find a seat anywhere are just two of the advantages of not going ashore.
As we sailed we had a small boat following us, which was the pilot boat. On our arrival, it was very sedate, but as we left in blew its whistle and started to do turns on the spot.

It never went forward or backwards just round and round on the same spot until the pilot was ready to disembark – it got a large round of applause when it stopped spinning and made its way to the side of the ship for the pilot.
Our next stop Lifou, the largest island in the Loyalty Islands.

The name Loyalty island was bestowed on the island by European merchants towards the end of the 18th century to acknowledge the cooperation of the local people. Whaling and timber were the main trade in the 19th century. Today it is copra, and now tourism.

If you have every carried copra, before containerisation, it is not a ‘friendly’ cargo with all the black bugs that infest the ship from the copra.

We anchored off the shore and the ship’s boats ran a service back and forth for most of the day.

This craft could carry about 140 people.

Maureen and I were on one of the early boats because we had been warned by our daughter that the prime spots were under palm trees because of the heat. Our daughter’s family had  visited this island last year on another cruise, so we were the advance party to secure the correct area for when the grandchildren and their parents arrived an hour or so later. 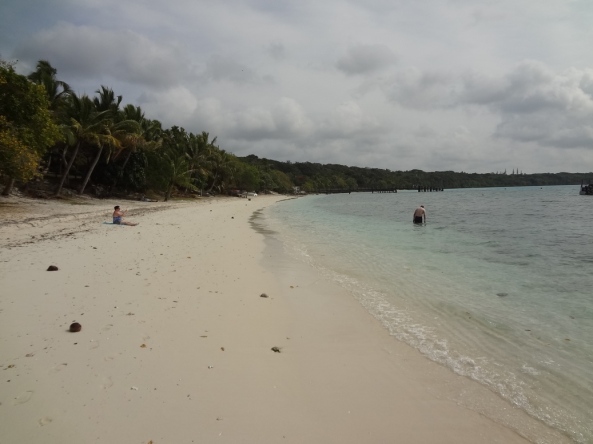 It was a very nice beach and the water was shallow for quite a way out. The coral out crops forced the swimmer to swim instead of wading in the shallow waters because the coral was very sharp. I found it easier to swim out on my back, which of course caused my front to get sun burned, which I paid for over the next few days. Not painful, just peeling.

As Pacific Jewel swung on her anchor she appeared to be quite close at times. The motto on the stern is ‘Like no Place on Earth’. The swimmers in the water were from the ship.

The coral went out quite a long way – but Australia has some of the best beaches in the world, with little risk of being shredded on coral, yet we all swam in waters that unless you were careful, would give you a nasty wound. More and more passengers came ashore – the beach was only used by the passengers; the locals didn’t bother.

– the black pier is where our boats tied up to take on or drop off passengers.

You know who, cast a drift on a desert island.

Back on board the theme of the evening was “WHITE”, so one had to make an effort. 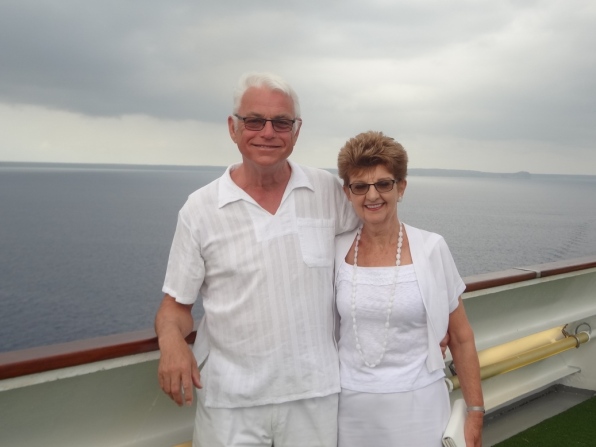 For the Conway readers I must brag a little here – the shorts that I am wearing are at least fifty years old – part of my BI uniform when I was at sea, and I can still get in to them with a little movement of the top button. It surprised me as well . . . . . .As you see with my white hair, I went a little further in to whiteness than Maureen.

Grand-daughters joined in the fun.

The ship’s children’s dance team helped to get the children in to the swing of things.

4 thoughts on “Islands in the sun”