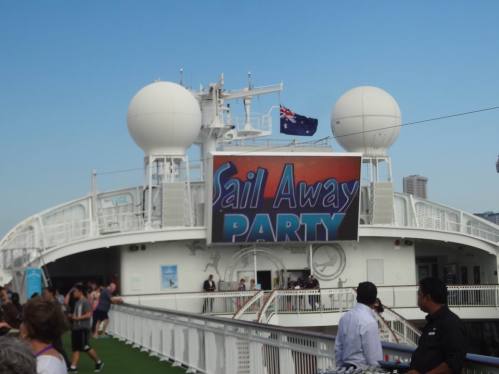 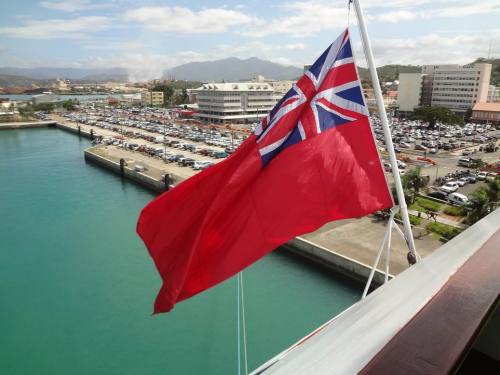 It gave me a very nice feeling to sail under the Red Duster once more, even if I was only a passenger. I took the picture of the ensign when we were in Noumea. 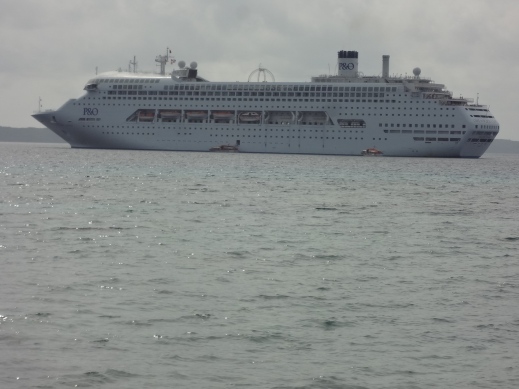 The P & O ship ‘Pacific Jewel’ is registered in London. She was launched in 1989 for Princess Line and in 2006 passed to P & O. She recently underwent a major restoration.

Having experienced cruise checking in at Venice, Sydney (Circular Quay) and Singapore I was disappointed with the check-in at White Bay. People wondered in to the terminal and then realised that they didn’t have the required government document to complete before they could check-in for the cruise. They then exited the building in the hope of finding someone who had the required forms. 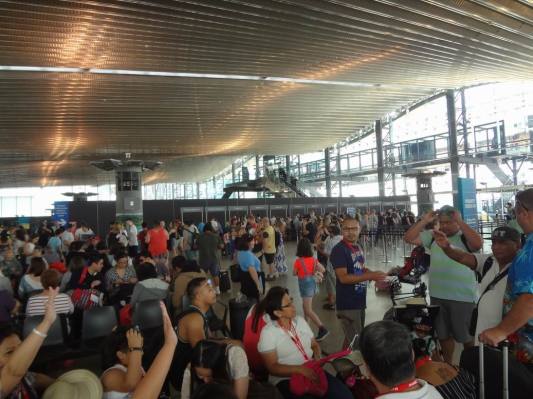 While in the building we couldn’t understand the loud speakers, and only picked up the occasional word and had to work out whether the announcement was meant for us or not.
Eventually we found our way to the processing line and joined the queue to check-in. On reaching the front we were checked in and issued with a piece of paper stating that we were in group 12 to board, after emigration and customs.

As in the other cruise boarding terminals, we waited for our boarding number to be called, but there wasn’t any indication as to the number currently being processed. In Venice they had an electronic board showing the boarding number so you could plan your movements. The Venice system was similar to a railways station indicator board – all very efficient.
Eventually we managed to find out that the ‘system’ was processing group number 10. A guard at the gate had a small card with ‘10’ written on the card, so we waited and watched a few people passing through to customs. The number was quite small and we could see the short line in front of the emigration desk, so we just wondered passed the guard, who didn’t ask for our number, and passed through the system . . .

At security (the walk through scanner) I mentioned my pacemaker and flashed my notification card. I was taken aside for a physical security check. The person who did the checking (a male) made several comments that I had to give him permission to touch me – he was very insistent that I was aware each time he was going to touch me.
It appears that we have become a society that we cannot just accept that we have to be touched for a security search, without the person doing the search to be frightened of the repercussions of touching someone.

Once onboard we dropped our hand baggage and went for lunch. After lunch we returned to our cabin to find out suitcases parked outside our cabin door. We’d released control of our suitcases before entered the terminal.
We had plenty of storage facilities so we were able to unpack completely and stow our suitcases out of sight. 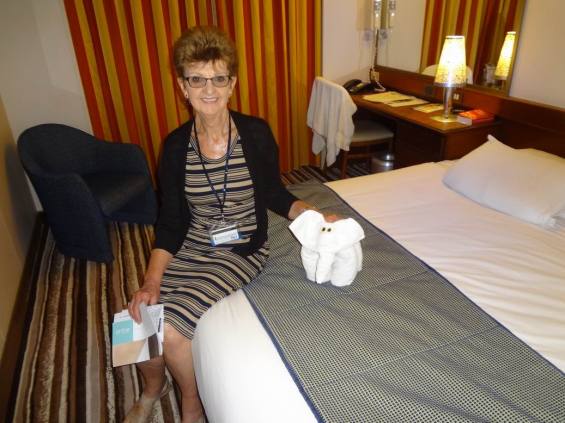 Our cabin was an inside cabin – one of the cheapest – but large enough for our needs. The bathroom was small, but not too small considering that I am over six feet tall. The shower was larger than I expected with very good water pressure. 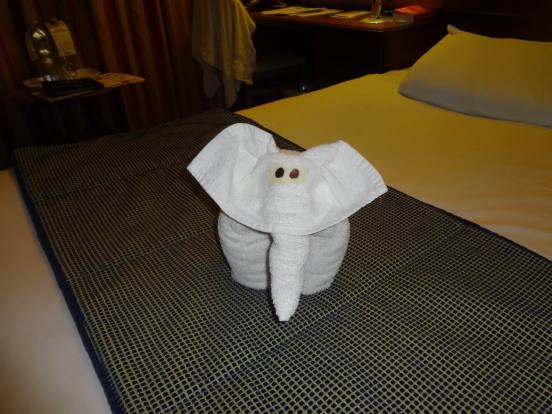 .
Our friendly steward (from Vanuatu) entertained us with towel ‘sculptures’. 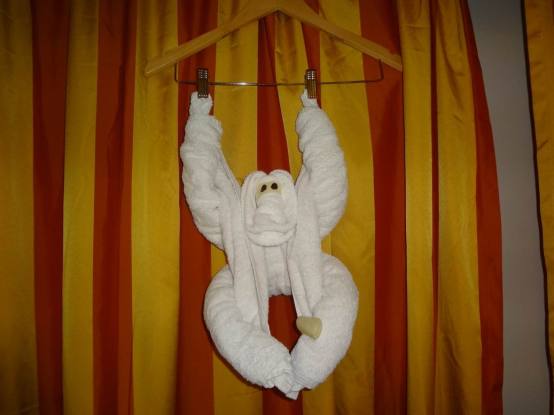 By 4.00 pm we were on the top deck to enjoy our departure – mobile bars helped with the party feel. Click on the link at the top of this page for Enya singing. 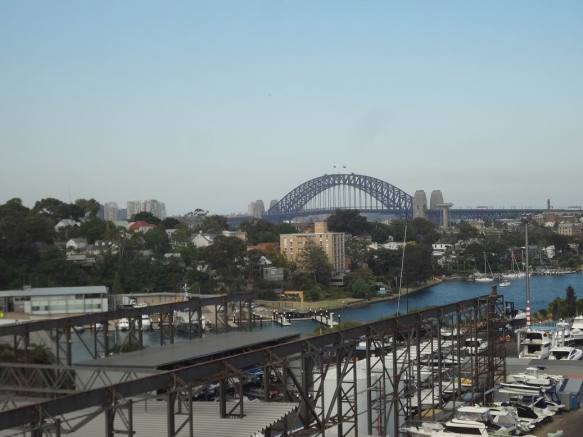 View of the harbour bridge, under which we will sail. 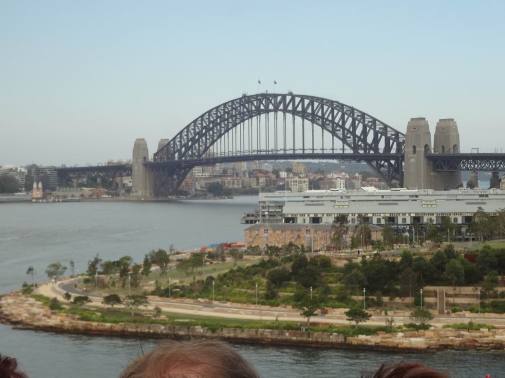 The green park area is the new Barrangarro park, which used to be an industrial area. 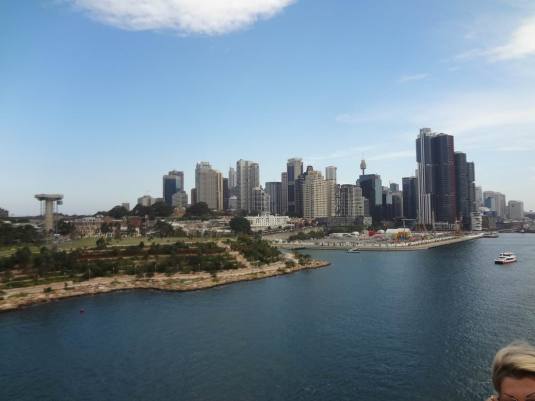 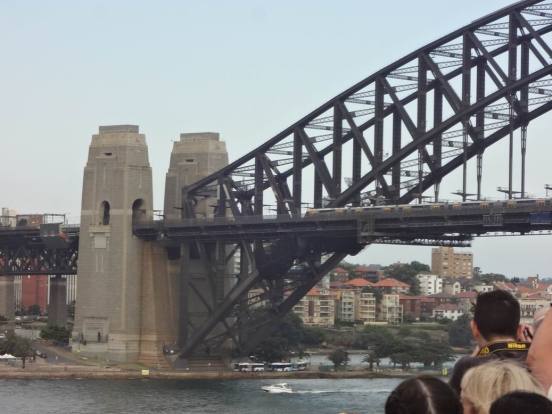 We approach the bridge . . construction was started in 1924, and it took 1400 men eight years to complete. Sixteen lives were lost during its construction. It has six million hand driven rivets, and 53,000 tons of steels was used in its construction. It now carries eight road lanes and two rail tracks, one in each direction. 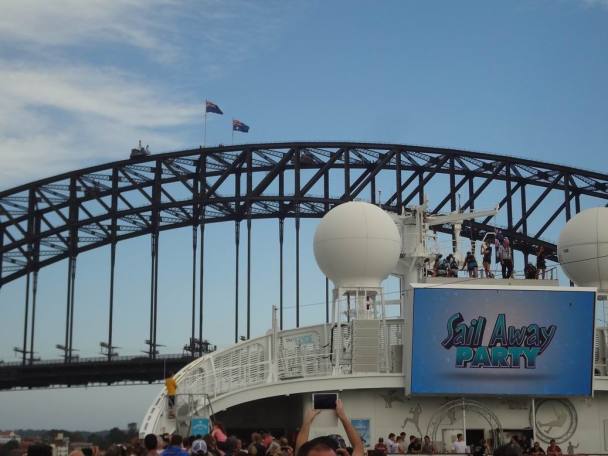 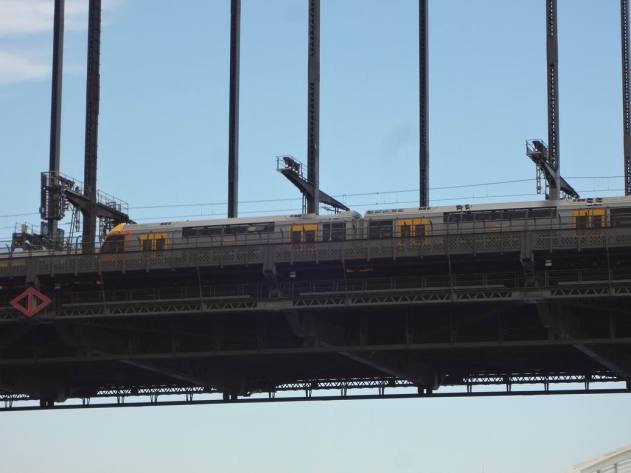 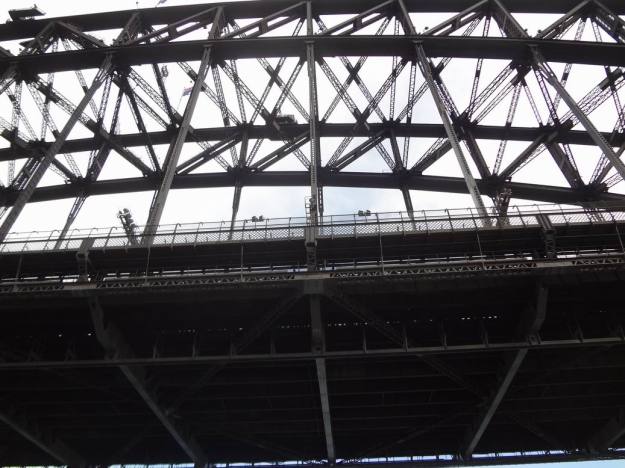 We cleared it with ease; the larger cruise ships cannot pass under the bridge and have to dock at Circular Quay, which is on the seaward side of the bridge. 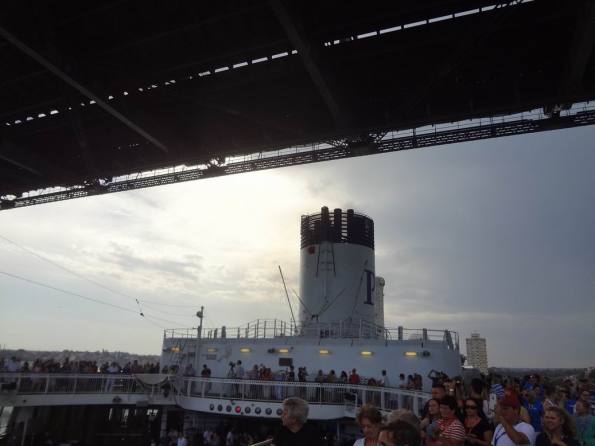 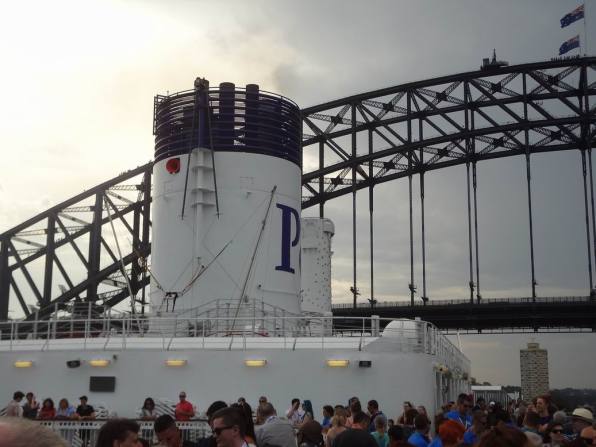 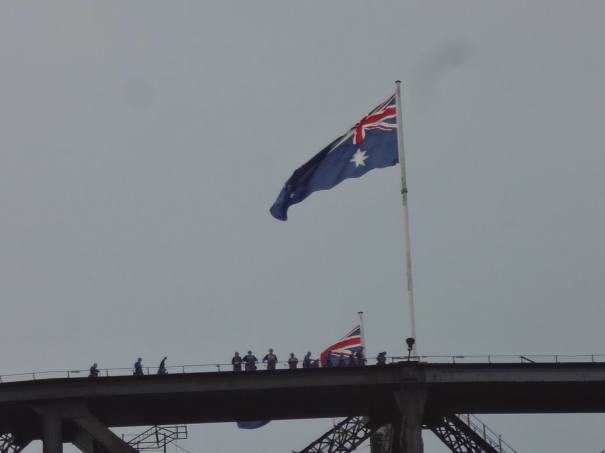 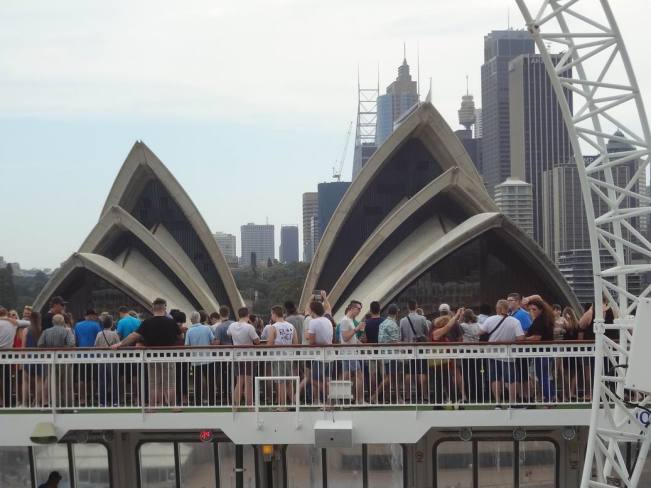 Passing the Opera House – from this angle it reminds me a helmet of a round head soldier during the English civil war. 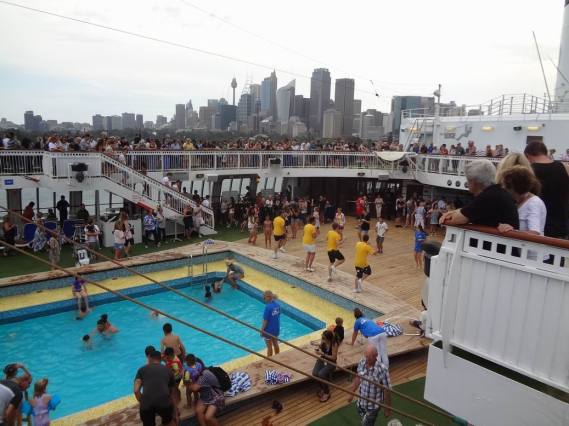 The four in yellow are some of the ship’s crew teaching passengers a particular dance to some very loud and fast music. One couldn’t help but join in the foot tapping. 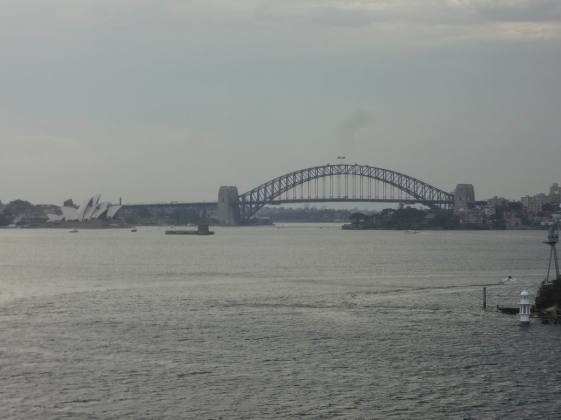 Approaching the harbour entrance and leaving the city behind.

It wasn’t long before both granddaughters were in the pool. 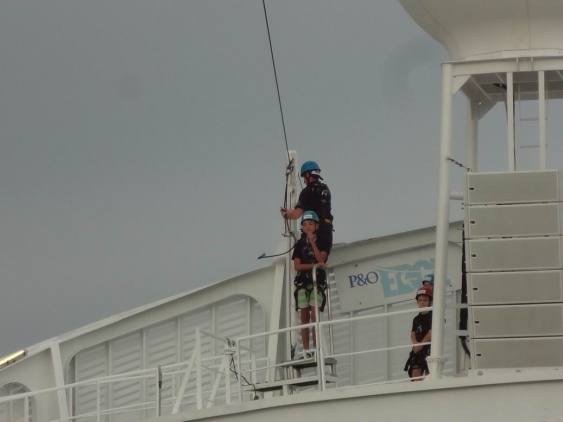 While grandson prepares for his first flying fox experience of this holiday. 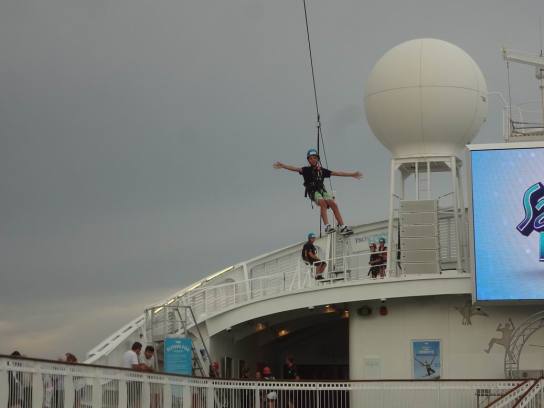 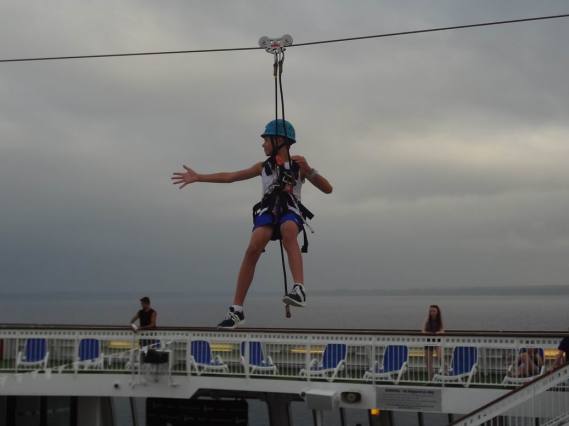 As he zooms passed.

We stopped at the mouth of the harbor, and I thought this was so as to drop off the pilot. We drifted for some time and the ship was kept on station using her thrusters. 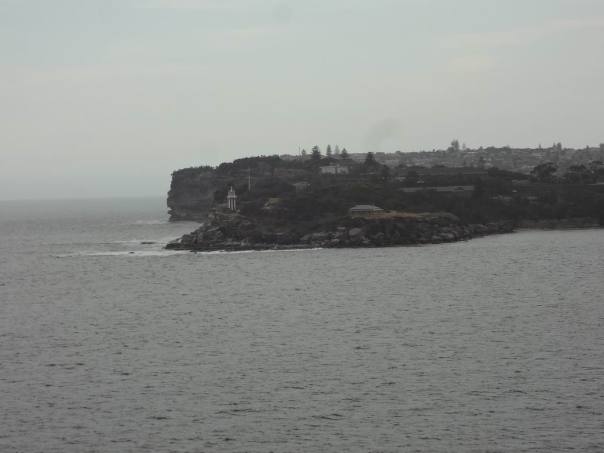 South Head point of the harbour as we waited and waited. Eventfully the Captain made an announcement that there was a medical emergency onboard. A short while later we saw a police boat come alongside, it looked like a medical craft (red and white squares) as if it belongs to the Red Cross.
I was told later that a handcuffed man was seen to be helped in to the ‘medical’ police craft and taken away. This of course generated a number of different reasons for the handcuffs and whether he was a passenger or crew member or even a stowaway.

Once this small boat was clear of us it was full steam ahead for our holiday. 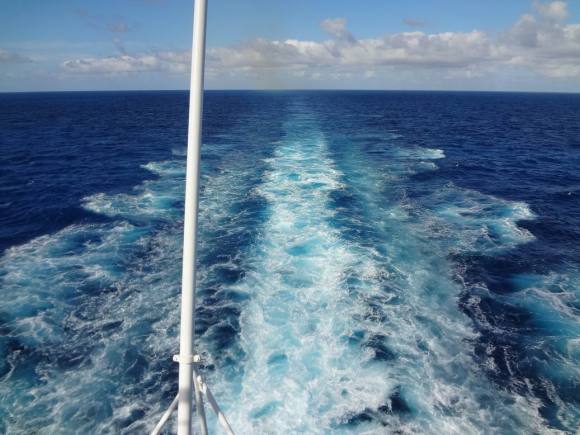 6 thoughts on “Sail Away”