In 1945 the Americans bombed the real bridge on the river Kwai. The centre parts of the bridge (the flat bits) are new, and the original part of the bridge has the curved sides.
We could walk on the bridge; it is a rail bridge only, and not available for road transport. 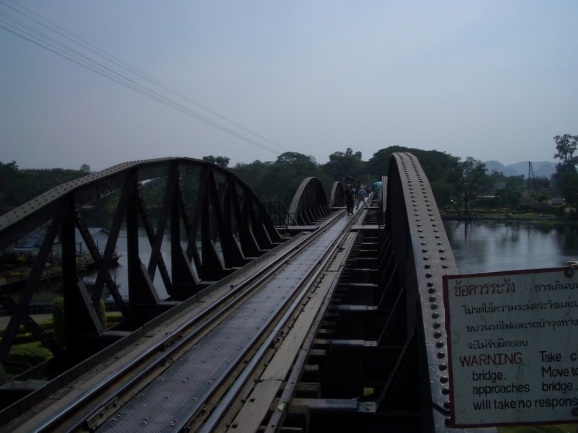 Before we caught the train to Numtok, which is now the end of the line, we visited the Kanchanaburi War Cemetery – a very emotional place as you walk passed thousands of plaques, which list the name, rank, regiment, age and date of death. 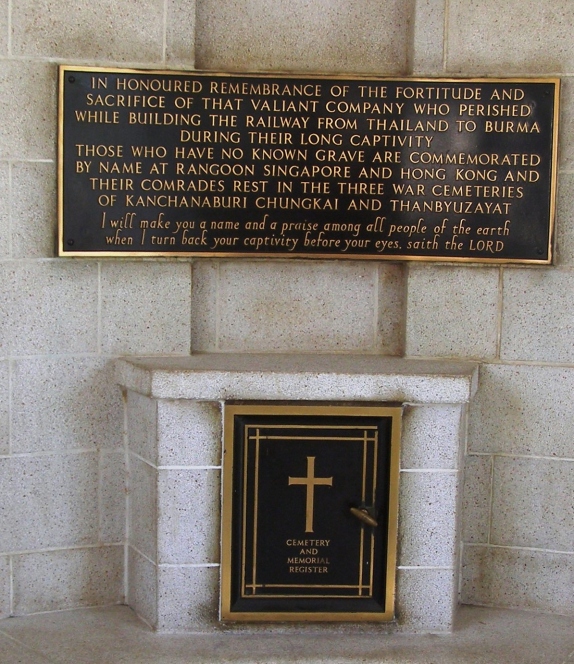 Lest we forget the 6,982 Australian, British and Dutch prisoners. 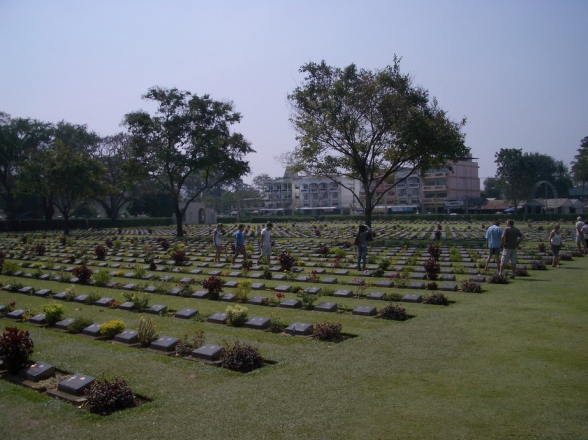 There is another cemetery a couple of kilometers away with a further 1693 prisoners.

One hundred and thirty three Americans also died on the railways, but their bodies were repatriated back to the US.

It is estimated that half of the 180,000 Asians, (Malays, Burmese, Thais, Chinese etc) who were forced to help build the railway, also died, but they are not buried in these cemeteries.

Our destination, by train, is Numtok – the line used to go to the Burmese / Thai border, but after the war the line from Numtok to Burma was ripped up. I have heard that there is a very small possibility that the missing line might be reconstructed.

The notice tells us that the station is the River Kwai Bridge, but it is Kanchanaburi, with a thriving market on the platform area to keep the tourists happy.

Our train has arrive.

Open windows, open doors and ineffective fans trying to keep us all cool. On looking down I was able see the sleepers and track through cracks in the floor. Not something I was used to on European or Australian trains, but all part of the ‘adventure’.

The line is a single line track so if you miss the train you have to wait for it to do the round trip.

We are about to cross the viaduct, which was built by the prisoners in seventeen days.

Approaching the end of the line – Numtok. 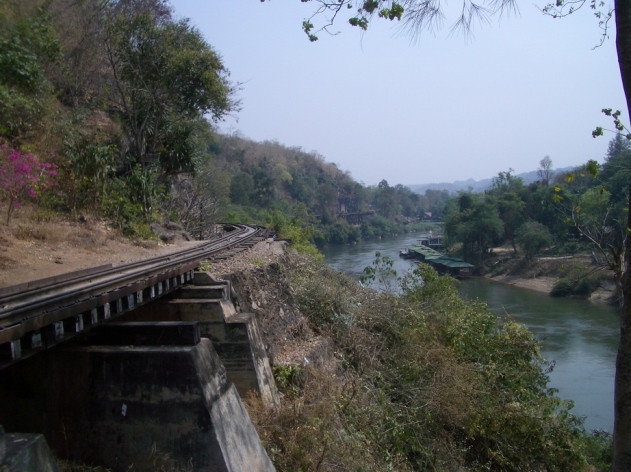 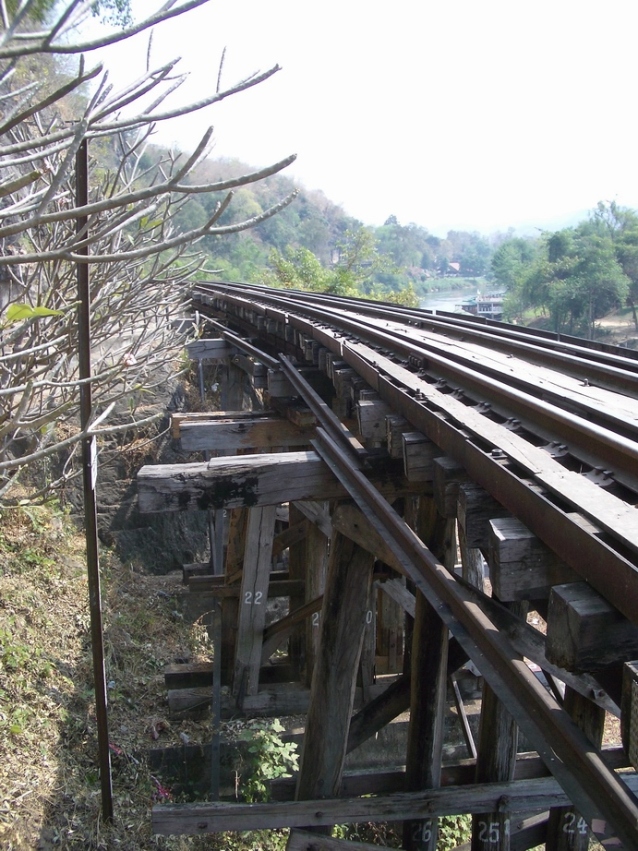 One dead prisoner for every sleeper of the 415 km railway –

They only had elephants to help, because they didn’t have any earth moving equipment.

Along side the viaduct was a large cave. This cave was used by the POWs as a ‘hospital’ it is now a Buddhist Temple in remembrance. 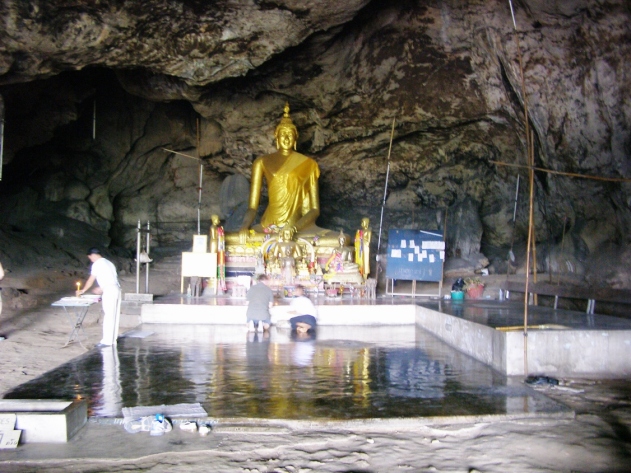 The correct name for the River Kwai is Khwae Noi, meaning small tributary, which merges with Khwae Yai River to create the Mae Kong River.

Pierre Boulle, a Frenchman, who had experienced great hardship after being captured by the Vichy French on the Mekong River, wrote a novel called ‘Le Pont de la rivière Kwaï’ – The Bridge of the River Kwai, which was later made in to a film, which became a great success.

It was such a success that people flocked to Thailand in an effort to find the Bridge of the River Kwai. The river didn’t exist, but the Khwae Noi did . . . .so in 1960 the river was renamed Kwai, which helped the Thai economy considerably.

The other small detail is that the film Bridge on the River Kwai was made in Ceylon (now Sri Lanka) not Thailand.

It’s an odd world – on checking a few facts for this blog I came across Lt Col Philip Toosey, who was the real Colonel in the camp that built this part of the railway.
He was nothing like the Alec Guinness character who collaborated with the Japanese – I believe Alec Guinness was not happy portraying this type of character.
Col Toosey had his men commit as much sabotage as possible, and I heard that he even collected termites and spread them around the wooden bridges in the hope that they would start eating  . . . .

At the end of the war, during the war trials in Japan, Col Toosey spoke up for Sgt Major Saito, who was second in command, (he was portrayed as a Colonel in the film), because he treated the POWs better than many of the guards. Saito respected the Colonel and later they corresponded.

Over two hundred Japanese were hanged for war crimes, and a large number of others spent many years in gaol.

After the war the Colonel returned home and worked in Liverpool, UK.

The odd bit for me is that Col Toosey came from Birkenhead, which is across the river from Liverpool. He lived in Upton Road and went to school at Birkenhead Park High School.

I lived about a hundred yards or so from this school, and between 1956 and 1960 I used to deliver newspapers for the news agency in Upton Village. My delivery area included all of Upton Road to Bidston hill, I just wondered if I used to deliver to the Colonel’s house.

Traveled a great deal - about 70 countries - first foreign country I suppose was Wales, which was only 80 miles away from where I was born. Visited each Continent, except Antarctica, and I doubt that it is on my bucket list - too cold. I love Asian food, Australian wine & British beer & trying to entertain by writing. View all posts by 1944april

4 thoughts on “Bridge on the River Kwai”

write a path far from here

Fine places in France and around the world.

Musings through the journey of writing my first novel

the stories behind the pictures, and vice versa