While in South Australia we visited Victor Harbor, which is about eighty kilometres south of Adelaide. Note the missing ‘u’ in Harbor due to a spelling error by an earlier Surveyor General (he was not an American). Oddly enough the current railway station at Victor Harbor is spelled Victor Harbour.
The town has a history of whaling, hence the water feature in the park, although the last whale caught in the area was in 1872.

Granit Island, just off the coast of Victor Harbor, is linked to the mainland by a causeway, on which a horse tram carries passengers to and from the island.

At the end of the day the tram is locked in the depot, and the horses had their own stable within the depot. They had more than one horse so that each horse had rest days. As the coach crossed the road the driver would ring a hand bell continuously to warn cars. It is such an unusual sight that cars slow down anyway.

The horse tram reminded me of a visit to Southport in the UK when I was a child. I am sure they had horse drawn trams travelling along the pier in the late 50’s. Perhaps I am getting mixed up with the seaside trams of Blackpool. I can’t spell alzheimer’s . . . .

We walked across the causeway to climb the small hill on the island for a view of the Southern ocean – next stop Antarctica. 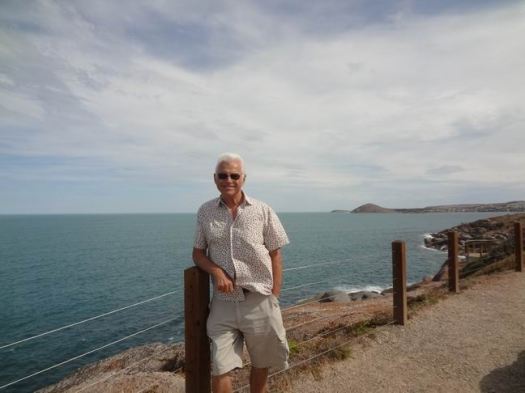 Of course once seen, I had to take a photo of the strangest road sign I’d see for ages.

One thought on “Give way to penguins”