Entrance to the HQ

On entering we were invited to watch a short film about the service, which included real incidents where sick and injured people were picked up by a flying ‘hospital’ and flown to a major population centres.

It is thanks to the Rev John Flynn who was ordained in 1911 and began to set up centres for the sick and injured in the Australian bush. He had a dream of supporting the bush hospitals, miners, farmers etc with a fast medical service, and in 1928, thanks to a large bequest, he began the what we now know as the Flying Doctor Service. The first aircraft being a single engine fabric bi-plane.

The explanation of each exhibit in the museum, and the educational video, brought home how important the service is to anything up to 220,000 people who live in remote areas. 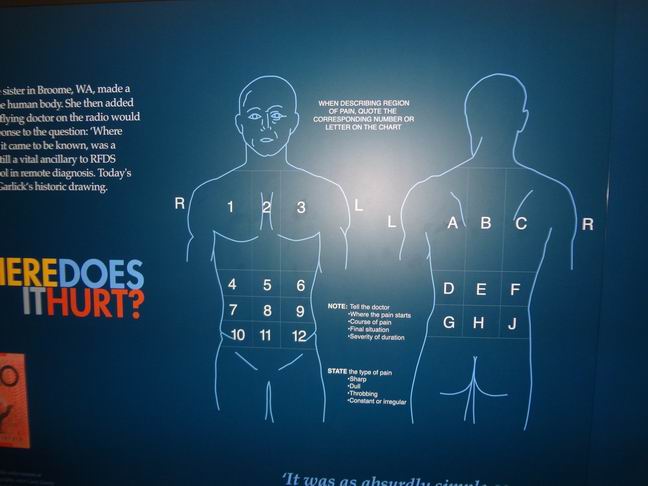 The above is a picture of ‘where does it hurt’ – the injured person could be hours flying time from the nearest doctor, so over the short wave radio he tries to describe his injuries and ‘where it hurts’ by the number & letter code system.

At the end of the video the receptionists asked us if we would like a conducted tour of their operation. Of course we agreed, and Larry (one of the operational staff) showed us around and explained how the whole system worked.
We saw that day’s operational team, and up to the minute situations. The Service operates 24 hours a day, three hundred and sixty five days a year. When I realised how large the organisation is, the cost of running such an operation is a question that I had to ask. The total cost is around $360 million dollars a year, split between Federal and State Governments for operational costs, but not for replacement of equipment, including about forty aircraft, which have to be replaced after each aircraft reaches about twenty years of age, or so many thousand of landings. On average the Service has to replace three aircraft a year at a cost of $8 million each.

For these aircraft replacements, and everything else from an office chair to a computer printer, has to come from public donations. 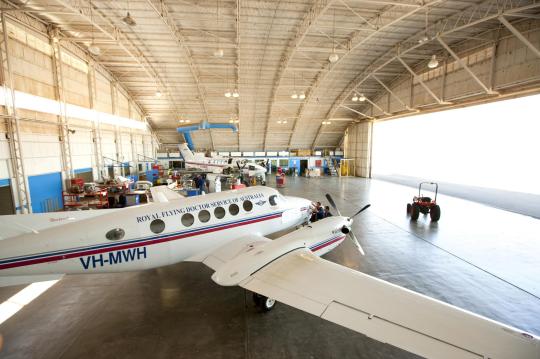 Inside the hanger. (Picture from the RFD web site) 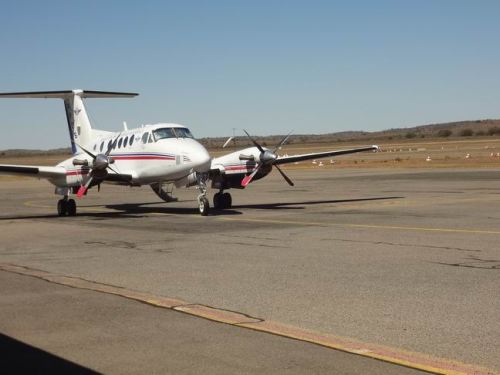 Concrete landing strips at HQ, but out in the bush it is a dirt landing.
The above picture is from the RFD web site.

Check the above link for a 90 second piece of film for some real medical items.

Australian TV made a fictional series of the Service in the 1990’s, which became very popular in Germany, UK & Belgium (no idea of  the number of repeats), but donations from the European fan club to help support the Flying Doctor service, is worth about $1 million a year to the Service!
There is also a souvenir shop with a wide range of items for sale, but the best part for me was being shown around the operational centre. The centre was ‘real’ it was not created for the tourists.

A Blog here to Serve